One of the most competitive seasons of the FIM Motocross World Championship’s history took to Assen for the MXGP of the Netherlands in what was the penultimate round.

Herlings is well known as the fastest sand rider in the world and today he showed why. Race 1 started with a FOX Holeshot by Cairoli as he just edged out Team HRC’s Tim Gajser. Gajser almost slid out nearly taking Monster Energy Yamaha Factory MXGP’s Romain Febvre down but both managed to stay up right.

Monster Energy Yamaha Factory MXGP’s Jeremy Van Horebeek was into 4th quickly as he passed Team HRC’s Evgeny Bobryshev. Meanwhile Herlings spun on of the starting grid but he moved forward quickly though passing Febvre for 3rd on lap 3 and on lap 7 took 2nd from Gajser. By then Cairoli had a gap of around 7 seconds as Herlings pushed to catch the red plate holder.

Herlings and Cairoli eventually met making the fans come to life as the battled for the lead. Cairoli though he didn’t need to win was no push over as Herlings passed him Cairoli responded quickly. Further down the track Cairoli made a small mistake, jumping to the edge of the track, which let Herlings go by.

From that point Cairoli settled into second but kept Herlings honest the rest of the race. At the finish Herlings won but the celebrations began for Cairoli, his team and supporters as he claimed his 9th FIM Motocross World Championship.

Race 2 started without the likes of Gajser or Monster Energy Kawasaki Racing Team’s Clement Desalle as both had hard crashes in Race 1 and were unable to finish.

Cairoli, with the pressure off of his shoulders, started in 6th but remained determined to win. Cairoli passed Anstie, Van Horebeek, and Febvre to get to third but a mistake caused him to tip over in the sand a lose the positions back.

The other dutch hero and Red Bull KTM Factory Racing rider Glenn Coldenhoff took 6th in race 1 but was involved in a wild crash in the second corner of race 2 taking him to 15th place finish for 10th overall.

Max Nagl weathered the Cairoli storm and in turn finished second in the race and 5th overall.

“I want to say thank you to all the fans who came out to support not just me but all the riders, all of us really appreciate it. It has been a good GP so far and I am very happy to get second in the championship, obviously it is a good end to the weekend after the start of my season. I really enjoyed my time racing not just because I won but because I felt that it was a good and a safe track for sure. I felt like the organization did a very good job and I think it was a positive turnout of people so hopefully we will comeback in the feature.” 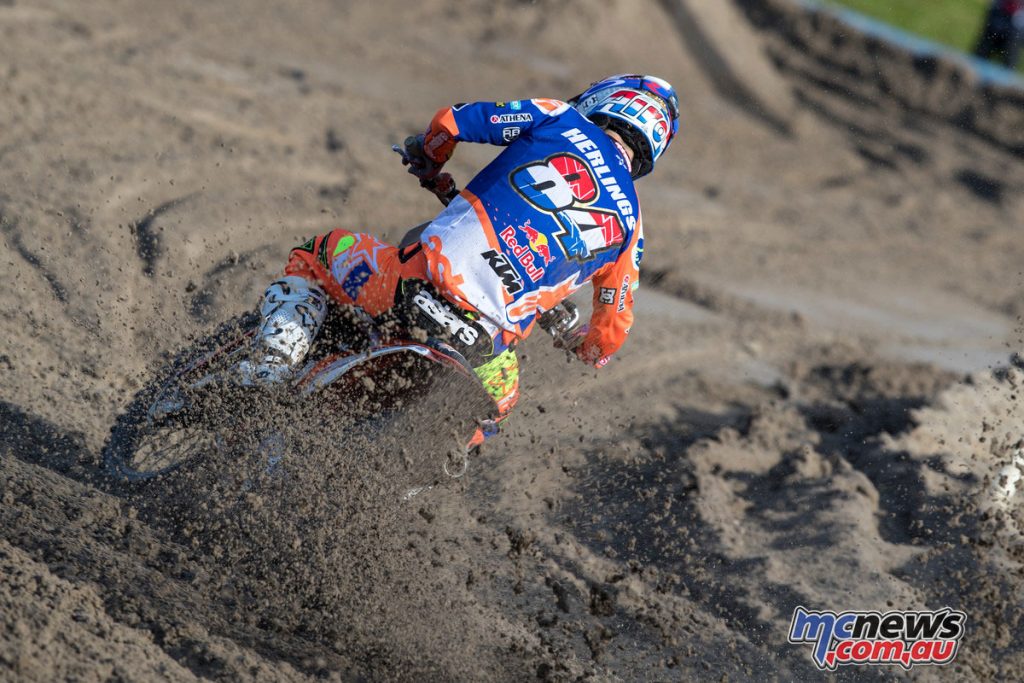 Romain Febvre’s 5-3 gave him his second podium of the season with a second overall.

“I feel good, the first race I was third all the race and then I got passed by Max (Anstie) on the finish jump. I was disappointed and just wanted to have a strong second race which I did. I think that it was a good weekend, yesterday was not so good for me so I am happy with how I turned it around.”

Max Anstie also took his second podium of his rookie MXGP season with 3-5 finishes putting him on the third step of the podium.

“Its always nice to be on the podium, myself and my team work really hard, I have to give it up to them. With my teammates we ride together and we train together a lot so we are trying to push the level and you have to because all these guys are really fast. It is great to be able race with them, I have a lot of respect for all the guys the top 15 are so fast in the MXGP class and its hard if you don’t get a good start. I think overall it has been pretty good we are solid. I feel good I just want to go faster thats all.” 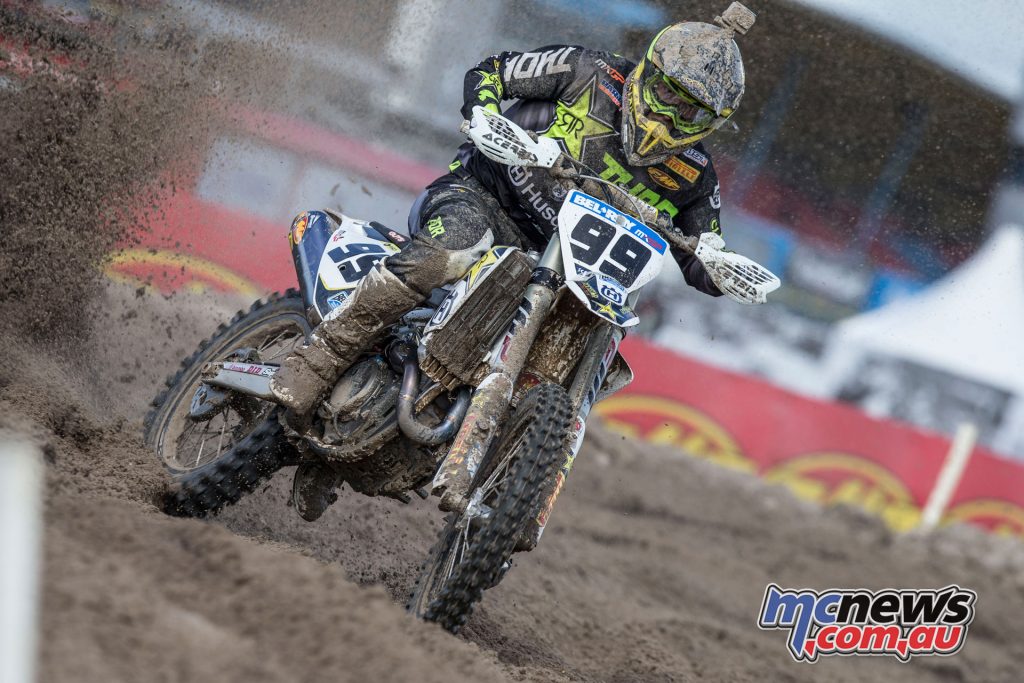 Fourth overall but 2017 MXGP Champion, Antonio Cairoli started his season to many as an under dog. Many questioned if he was on his way out but his performances this season have shown nothing of the like.

From the first race of the championship in Qatar to his amazing comeback at the MXGP of Trentino, Cairoli defines what a champion is and after 8 prior Motocross World Championship this year may be the most impressive as he claimed it with three races still to go in 2017.

“We didn’t start as a favorite for sure this year. I know what I work for and I know what it takes to have a solid and consistent championship so we made it and I am really happy about this. It was an amazing season, I think one of my best, it is amazing that I can still improve after 14, now 15 years in the world championship, I really am proud of this. I just want to enjoy this title, we had a very good weekend especially today…but I’m really happy because the championship is the most important thing for me. To take it here in Holland with all the fans it was very nice, the track was amazing even with the rain it still worked out and it was very technical, the organizers did a really good job so nothing could be better.” 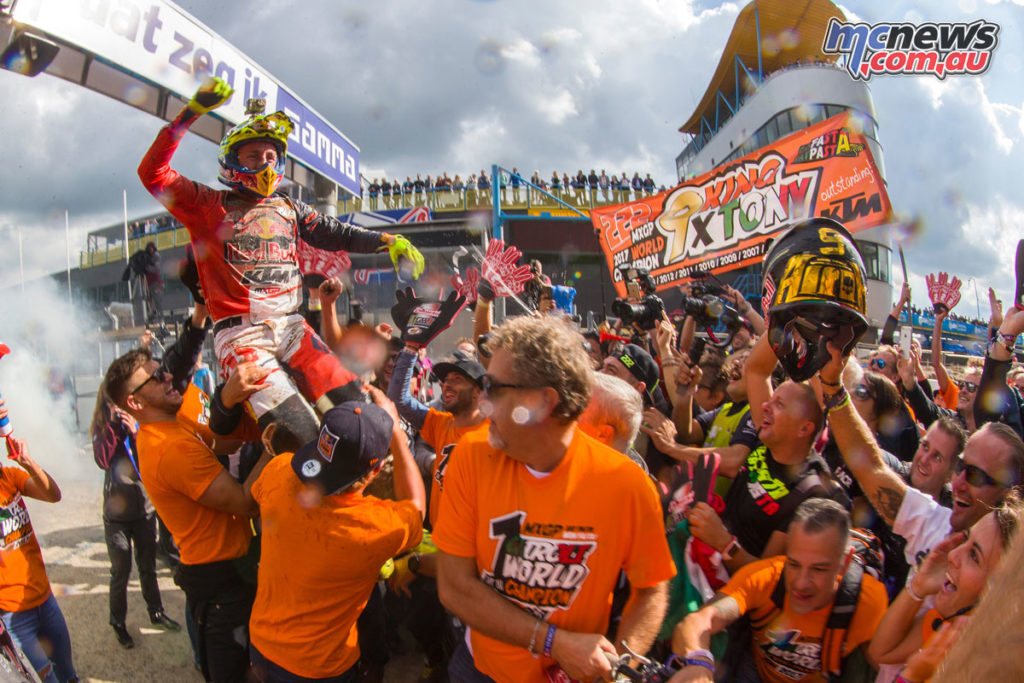 One of the fastest riders circulating the sandy Assen track in both motos, Max Nagl placed fifth overall at the Dutch GP. Battling through a first lap crash to get 10th in moto one, the German got an impressive holeshot to secure the runner-up spot in the final moto. Moving up a spot in the championship standings, Nagl is now placed seventh with one round to go.

“I’m really happy with my performance this weekend. The track was rough and the rain on Saturday made it even tougher. My speed was good in both motos and I felt that I could have earned a spot on the podium. In the opening moto my start was good and I was racing inside the top six but I crashed in the opening lap. I got up and started pushing to finally cross the line in 10th position. Then in moto two we decided with my team to select the far outside gate and that proved to be a very good idea. I got the holeshot and found myself leading for the first couple of laps. When Herlings passed me I tried to stay behind him looking for some better lines. Then I pushed hard until the end and managed to get a strong runner-up in moto two. My bike was running great in these tough conditions. We now have on GP to end this season and I can’t wait for it.” 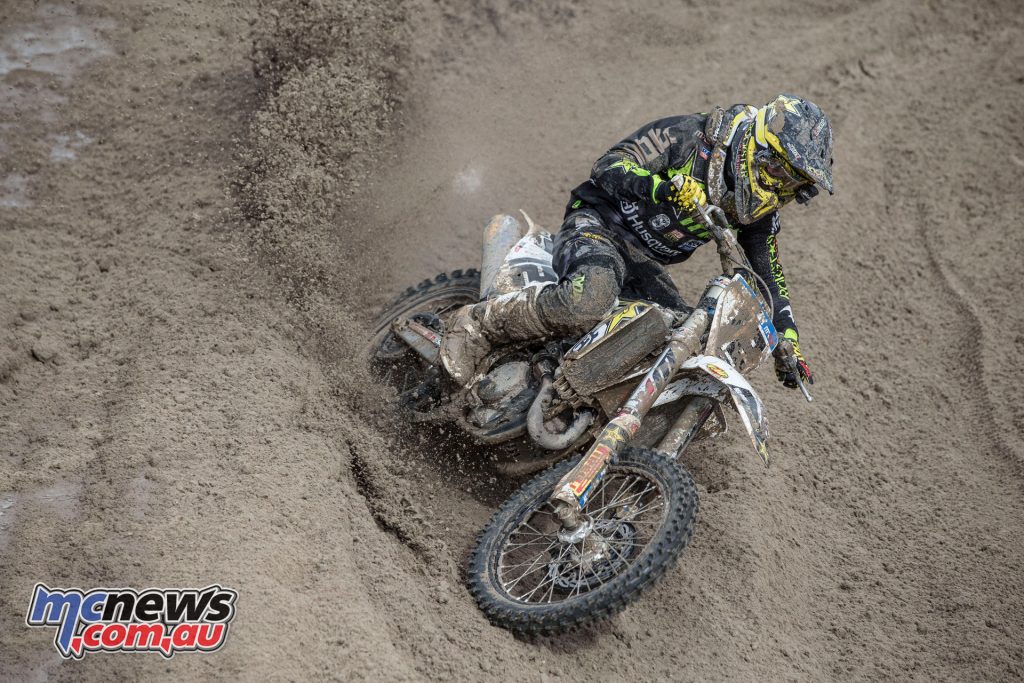