Chaz Davies tops day one under lights in Qatar

Chaz Davies (Aruba.it Racing –Ducati) stole the show in the floodlit desert when the stars of WorldSBK commenced battle at 21:00 local time (GMT+3) on Friday evening for Free Practice 2. The top ten gained direct entry to the grid-deciding Tissot-Superpole 2 session to be held on Saturday before lights out for the penultimate Race of the 2016 season.

FP2 saw Davies and Jonathan Rea (Kawasaki Racing Team) fight for the fastest combined time, with the Welshman prevailing in the final minutes of the session. Rea finished second fastest ahead of Xavi Fores (Barni Racing Team) who set the third quickest time of the night.

The action packed FP2 session saw Rea go on a desert trek in the gravel at the halfway mark, after he ran wide at turn 9. However, he quickly recovered and maintained his place in the top three. Sylvain Guintoli (Pata Yamaha Official WorldSBK Team) improved his times from the earlier session to bring his Yamaha home in fourth ahead of Leon Camier (MV Agusta Reparto Corse) in fifth. Alex Lowes (Pata Yamaha Official WorldSBK Team) easily moved through to Superpole 2 with the sixth fastest time, while Jordi Torres (Althea BMW Racing Team) trailing just behind him in seventh and Nicky Hayden (Honda World Superbike Team) in eighth.

The struggle from FP1 continued for Tom Sykes (Kawasaki Racing Team) when he ran off-track soon after Rea’s desert excursion. His rear locked up in the gravel and caused the frustrated Yorkshireman to head back to the pits. Sykes only re-joined the session in the last 15 minutes and in a desperate dash not to let his teammate and Championship rival out of his sights, he finally finished in ninth, comfortably ensuring his entry to Superpole 2.

Lorenzo Savadori (IodaRacing Team) was the last man home in tenth and safely through to Superpole 2. Leon Haslam (Pedercini Racing) made a great start to his weekend after a year out of WorldSBK competition, to finish with the 11th fastest time. Though he didn’t make it directly into Superpole 2, his pace shows he could be a serious top ten challenger ahead of the weekend’s races.

An early spill at the beginning of the session for Michael van der Mark (Honda World Superbike Team) saw the Dutchman struggle to maintain his top ten position. He just missed out on Superpole 2 after finishing in 12th and will now have to fight in Superpole 1 on Saturday if he wants to take advantage of a top ten grid position.

Once the grid has been decided in Saturday’s Superpole sessions, the lights will go out for the second to last time at 20:00 local time (GMT+3) at the incredible Losail International Circuit. 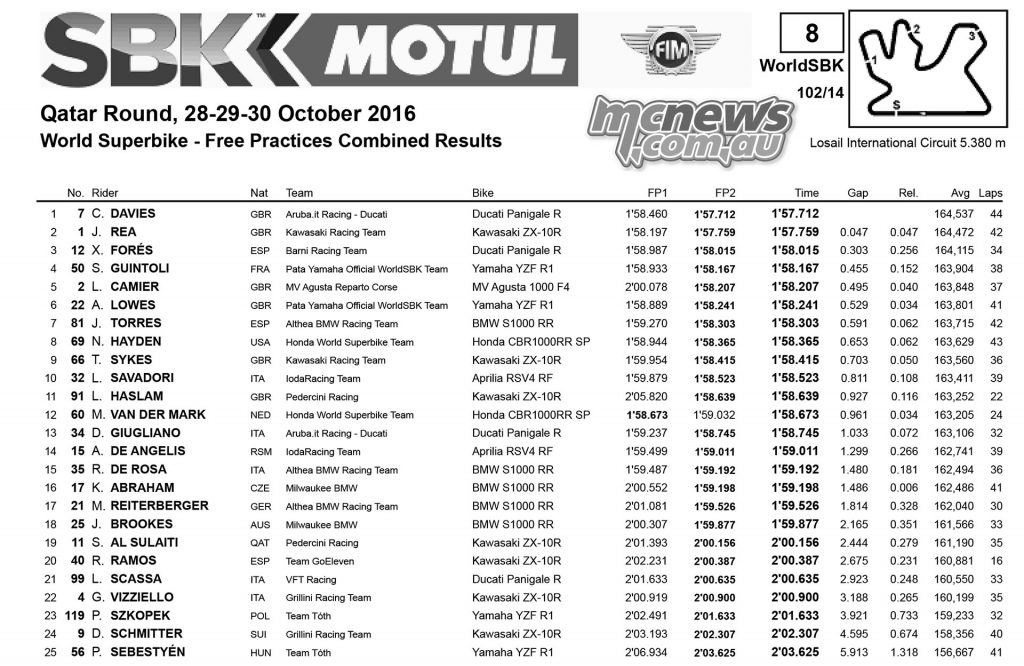 Randy Krummenacher storms ahead in the night 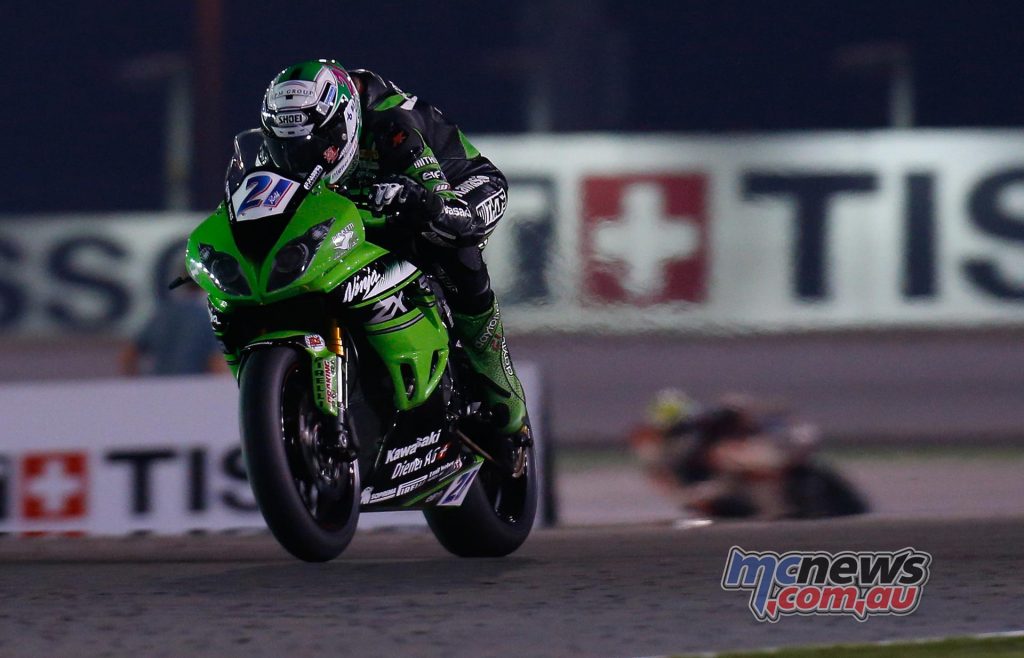 Krummenacher heads into the Gaerne Qatar Round fighting for second overall and by topping the timesheets in the combined standings on Friday evening, he cements his position as a serious challenger for the fight. Ayrton Badovini (GEMAR Balloons – Team Lorini) finished in second after setting times consistently in the top three throughout the session. Alex Baldolini (Race Department ATK #25) proved he’s back from injury and stronger than ever, setting the third quickest time of the evening.

The first half of the session remained steady with only the top two riders improving their times from the earlier session. Badovini was first to shake things up by briefly setting the fastest time, before Kyle Smith (CIA Landlord Insurance Honda) overtook him and improved on his combined time to lead until the half way mark. Newly crowned World Champion Kenan Sofuoglu (Kawasaki Puccetti Racing) soon joined the party, shooting to the top with his fastest time of the night and continued to lead, until the final minutes of the session saw times tumble rapidly as riders desperately fought to finish in the top ten.

Honda World Supersport Team’s PJ Jacobsen who is another challenger for second overall, finished in fourth proving he’ll be hard to shake off. Smith finished in fifth ahead of Sofuoglu in sixth, who wasn’t able to match the pace of the top five as he did in the earlier session.

The stars of WorldSSP will be under the spotlight once again on Saturday 29th of October for the Tissot Superpole qualifying sessions to decide the grid ahead of Sunday’s season finale. 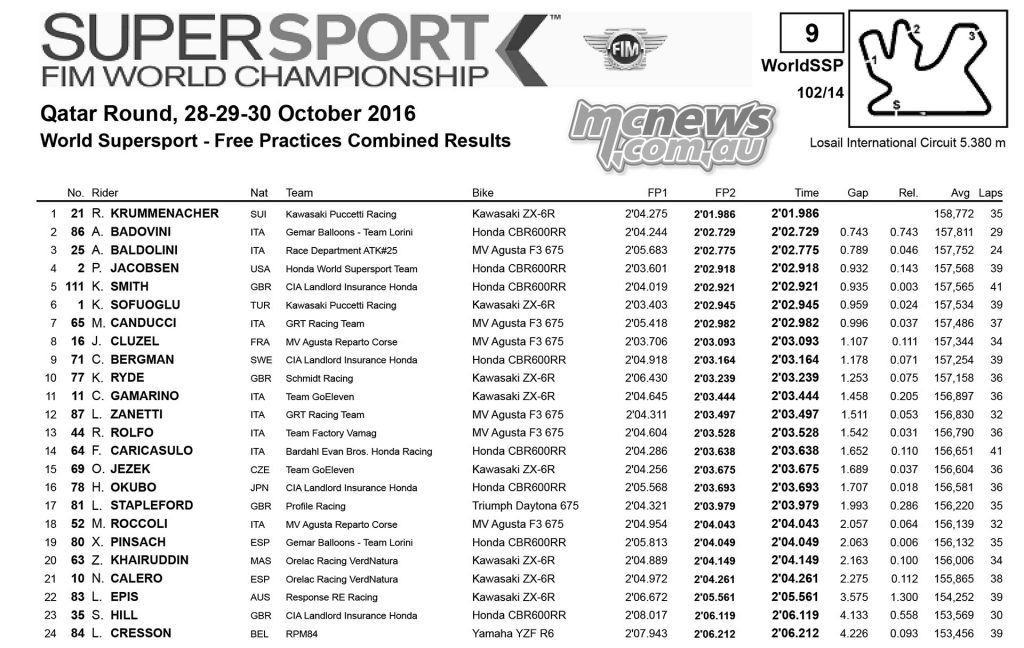 Riders reflect on opening day of practice in Germany