After staying the night in Kimba, we got on the road heading West this morning but, like previous days, we chose not to take the most direct route. Instead we headed back towards the coast at beautiful Streaky Bay to take in the views and shoot the bikes. It is a lovely stretch of coastline, but in a somewhat different, more peaceful way to that found around much of Australia.

Streaky Bay is 303km north-west of Port Lincoln, and 727km by road from Adelaide. The area was first sighted, by Europeans, in 1627, when the Dutchman Peter Nuyts  from the ship Golden Zeepard (a monument to which is in the town). Almost 200 years later, in 1802, Captain Matthew Flinders rediscovered and named Streaky Bay whilst examining the South Australian coast in the ship the Investigator. He named it because of the streaks in the water across the bay (caused by the reflection of light and seaweed).

Then it was on to the Penong Pub for a drink after grabbing some lunch from the local takeaway. I have stayed at Penong a few times and the rooms start from $40 which leaves plenty in the budget to spend over the bar instead.

Penong features dozens of windmills that pump water from the Anjutabie Water Basin, while Lake McDonnell to the south is harvested for salt and Cactus Beach is a a major surfing mecca. There’s even the Woolshed Museum on the outskirts of Penong for those looking for a bit of history and local arts and crafts. The Caltex Roadhouse and Fast Food Outlet also has fuel available 24 hours a day, seven days a week and was the cleanest service station we have visited on our travels thus far.

From Penong you quickly meet the Eastern end of the Nullarbor Plain, a long and wide treeless expanse that stretch for 200,000 square kilometres, measuring 1,100km at its widest point

Next stop was to take in the grandeur of the Great Australian Bight via the clifftops that underline the border of South Australia and Western Australia. The road that straddles this surreal, stark, but also somewhat hauntingly beautiful stretch is called the Eyre Highway, named after Edward John Eyre, the first European to cross the Nullarbor in 1841. This great expanse continues to capture the imagination to this day, with ‘Crossing the Nullarbor’ remaining a right of passage for many Australians.

With its desert climate the Nullarbor is renowned for temperatures reaching 50°C in summer, while at night in the winter temperatures drop below zero, with rainfall mainly between May and August, while summer storms are sporadic, but not unheard of.

For our sojourn today on the Nullarbor there was a fair bit of rain and wind, providing the opportunity yet again to test the mettle of the Moto Guzzi’s traction control system. I deliberately wicked it up at various times and the intervention from the electronic nanny was swift, and cycled quickly as it cut torque to the rear wheel, and just as quickly also reapplied the power off and on as it felt out the traction available on the road. It’s an impressive system, not just a sticker for the marketing wonk to say we have traction control, but a genuinely good safety aid that at no times intervenes when not required. It also has three adjustable levels of intervention and, more importantly, can also be turned off should you want to rip a skid! 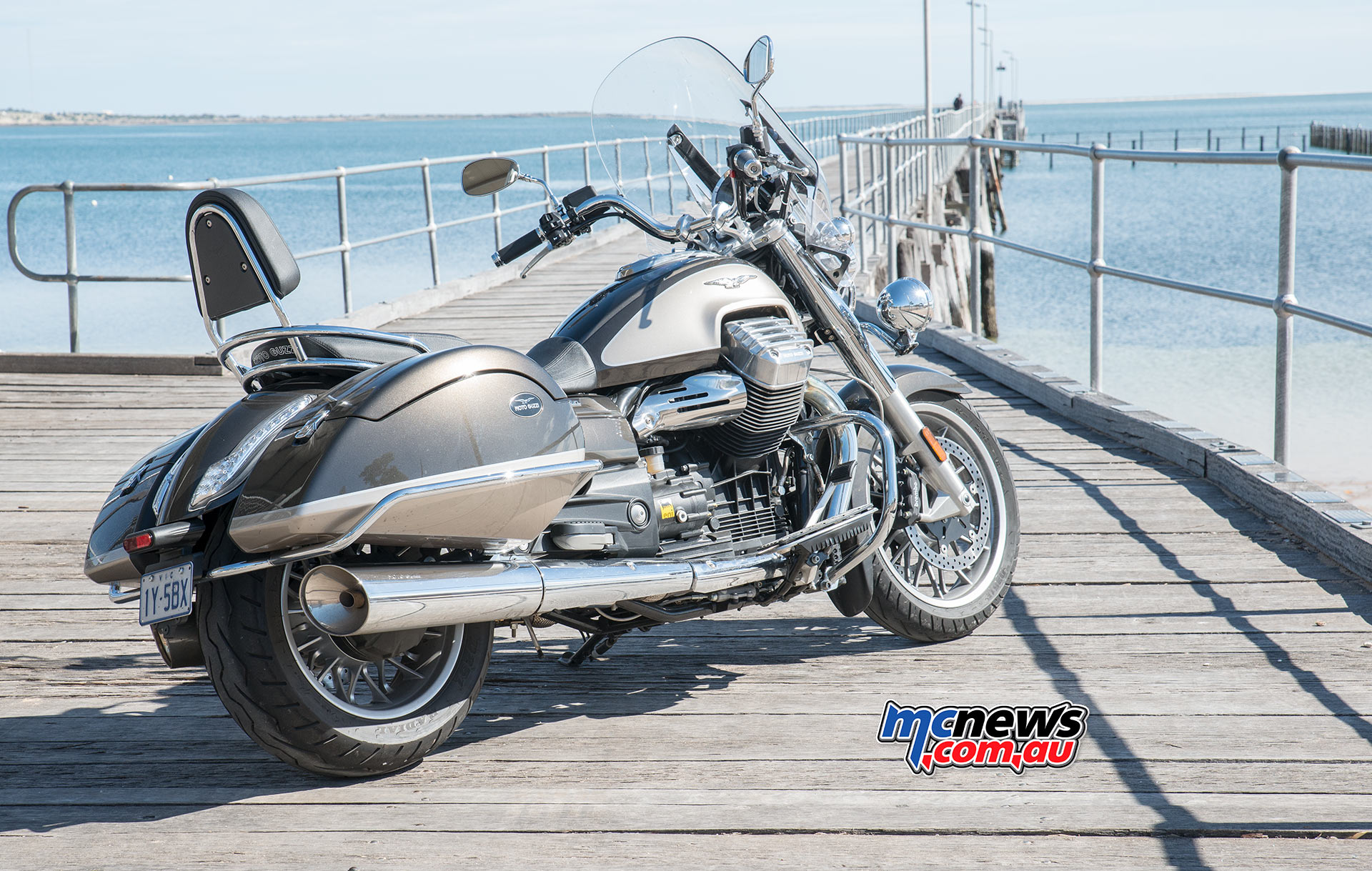 I did do a bit of zenlike bonding with the Guzzi today.  Despite mufflers the size of World War One cannons that exit way behind the panniers at the rear of the bike, at low speeds and when pulling away the lilt of the transverse twin is really starting to win me over. It is amazing it can be heard at all looking at those mufflers and where they exit, and at speed certainly there is no note to enjoy, but at low speeds it sounds pretty damn good.

Looking at the dyno results we published yesterday you could expect it to be a bit doughy off the bottom compared to the larger engined diesel like donks here, but you have to remember it is still a 1400cc engine that makes plenty of mumbo down low, and shorter gearing makes it still very responsive. Most Italian small cars now come with engines smaller than found in the Guzzi! And the latest ride-by-wire engine management system has Guzzi’s infamous massive engine braking compression lock-ups under control, finally!

The Triumph has a commanding presence from the cockpit, more so than the others. It seems somewhat bigger, more substantial, with the wide tank raising and flaring towards the front, and the huge shrouds surrounding the forks and triple clamps, making for a beefy outlook. It feels bigger, more tough, more substantial than the others from the riders seat. You also feel perched a little higher, as your viewpoint looks over the standard screen, giving an impression of being tall in the saddle, despite its low 700mm actual seat height.

In the parking lot I found that the Triumph felt a little more cumbersome than the others. But then our shortarse on the trip, all 5′ 3″ of her, reckons the Harley feels more top heavy and a struggle to manoeuvre, as did one of the blokes, but, in contrast, I reckon the Harley is an absolute doddle to, well, doddle about on. Funnily enough, the final of this gang of four, who agrees with me in what I said both about the Triumph and the Harley, is the next most confident rider after myself. Read into that what you will…

Only the Guzzi has adjustable levers for both brake and clutch, while unbelievably neither the Triumph or Harley have any adjustment on either brake or clutch lever. The Indian does sport an adjustable brake lever but no adjustment on the clutch perch. I find this unbelievable on what are, essentially, high end machines. The Triumph I certainly would have liked some adjustment on the chunky clutch lever, as it was a fair reach out for the fingers to engage. The Harley clutch I feel could have also benefitted from some individual tailoring in reach and throw.

One thing that hasn’t changed is that the standard Harley mufflers rust their end caps 42-seconds after any exposure to moisture. I am gobsmacked that this continues without correction. Are Harley owners that forgiving to put up with this inexcusable fault? Likewise, I knew from previous experience, that surface rust on the outer races of the front wheel bearings has been an ongoing problem for most Harley models, so while discussing the bikes with my fellow riders over a few drinks of an evening I got them to go out and inspect those areas, sure enough, signs of corrosion already rearing their ugly red heads on the front wheel bearings. For a company that does so much so right, I just can’t understand why H-D management can allow things like this to continue. No other manufacturer would get away with it, that’s for sure.

While we are on beefs, let’s talk about fuel caps…   Neither of the American bikes have lockable fuel caps, but they are also the easiest to use. The Moto Guzzi fuel cap can’t be put on without being locked, and it is a little fiddly to take on and off. The Triumph fuel cap is lockable, but requires a different key from the ignition to lock, and another key yet again to lock the steering, so three keys all up, and the soft panniers aren’t lockable, as then there might be four keys…!

The Indian and Harley both have remote key fobs, thus the keys can stay in your pocket when starting or riding the motorcycle, but both have physical keys to lock the steering. The Guzzi steering locks, most conveniently, from the ignition barrel, while a separate key is provided for locking the hard luggage. Indian’s keyfob has a remote control button for locking and unlocking the panniers, no key required, nice…

Gee we have done some whinging tonight…  An 1100km day, even with some extended photo stops, and a long lunch for me to get some work done,  must have us all tired and emotional… Nobody is yet complaining of a sore arse or too many aches and pains, yet…. Might be a different story tomorrow night…

Have a read back through our last couple of reports from the journey below. Tomorrow, we make a beeline for Perth via Kalgoorlie…

Husqvarna MY15 & MY16 Runout Deals