The Gannet Racer was designed and built by Ulfert Janssen of Gannet Design and Stefan Fuhrer of Fuhrer Moto, based on the modern V9 Moto Guzzi and transformed into a purist racer. Here’s a look at the work that’s gone into this stunning machine.

Although the bike is from 2016, the designers went “back to roots” and provided it with two Keihin carburetors. These give the bike the necessary boost for the sprint races and a flair of nostalgia.

The hand made tail section of aluminum and partially adapted frame construction gives this conversion a cafe racer look, while a racing configuration, includes components such as CNC Racing footpegs, Jetprime racing buttons and IMA triple clamp, as well as various custom-made elements. 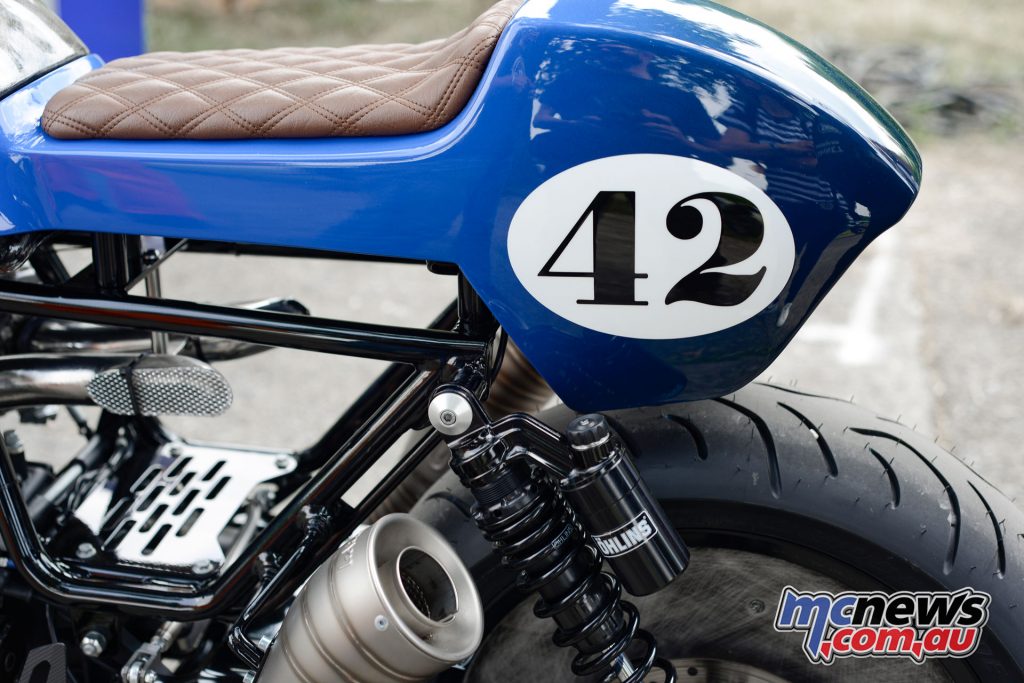 The paint is a rare mixture of “scrubbed”, high gloss shine, and strong blue – Rhapsody in Blue.

It is a radical transformation from a relaxed cruiser configuration of the Moto Guzzi V9 “Roamer” donor, reduced to the essentials with some retro elements and spiced up with the finest racing parts. 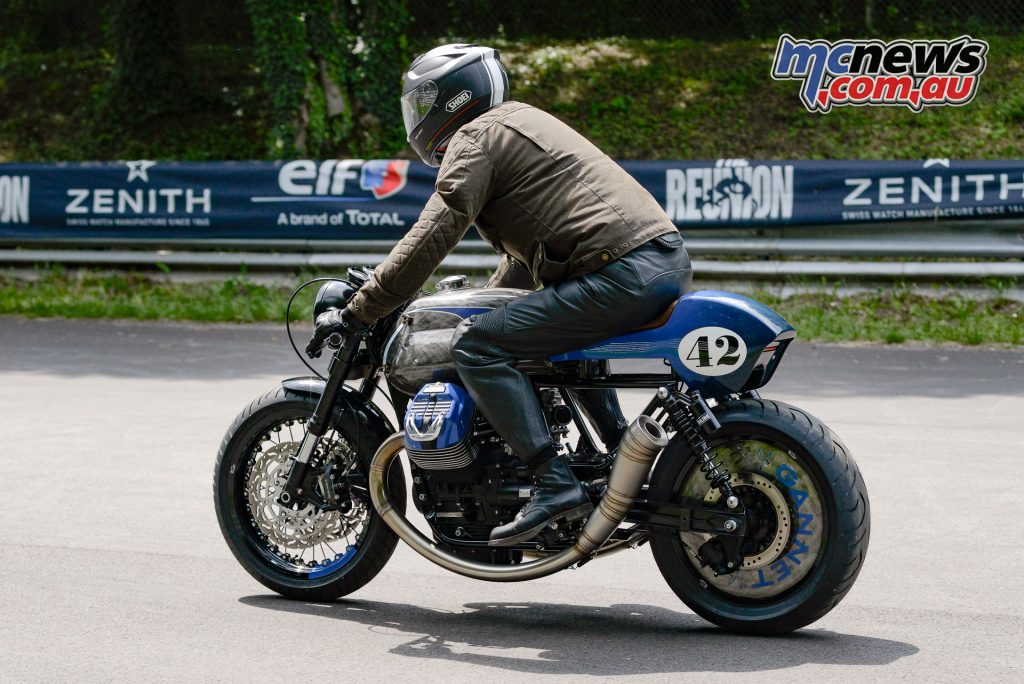 The bike is designed and built by Ulfert Janssen – Gannet Design and Stefan Fuhrer – Fuhrer Moto.

Gannet Design’s partner is Stefan Fuhrer (Fuhrer Moto), former racing mechanic of Dominique Aegerter (now Moto2) and Tom Lüthi (now MotoGP), with the latter he became the world champion in 2005 in 125cc class. Now Stefan is the “brother in crime” for the Gannet custom builds. His racing know-how, precise engineering skills and his team of artisans are the perfect partner for the Gannet shenanigans.

Ulfert´s design studio and Stefan´s workshop are just 100m apart, so it is a perfect set.

The project started with some loose sketches by Ulfert to find the good way for morphing the Roamer proportions into a forward leaning racer look. 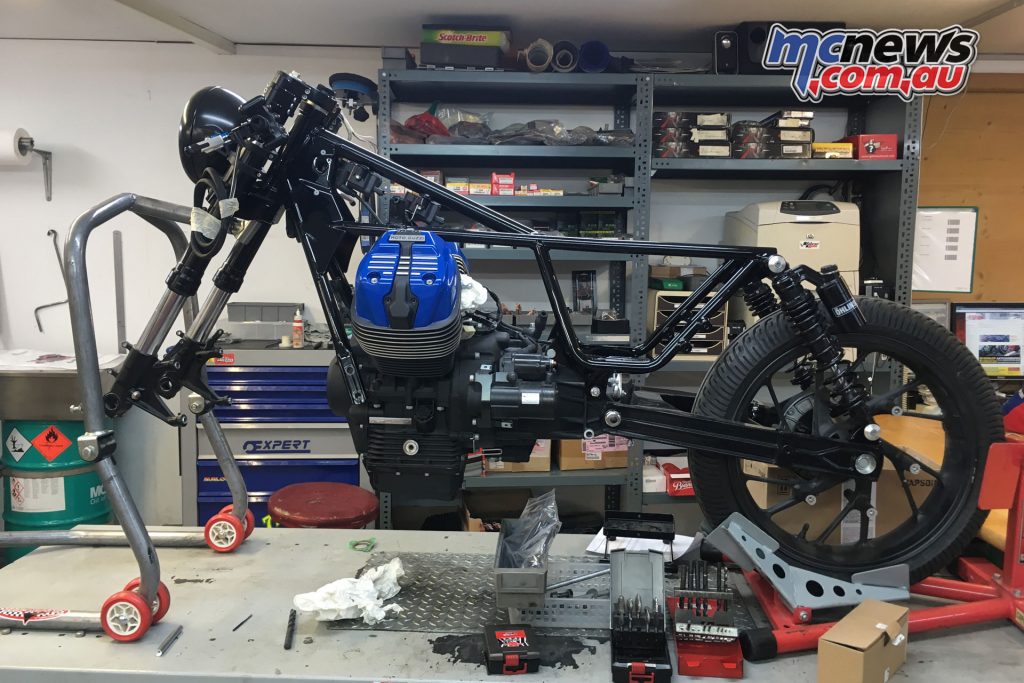 “First I worked on the stance and changed the frame angle from slanted backward into a forward leaning angle. I cleaned up the architecture and made a major diet of all the unnecessary parts. I designed a new strong retro racing tail section and new exhaust system as a signature which sweeps along the bike like a swoosh. Once the overall direction was settled, I made detailed design renderings which we used as the base for the building process. I first modeled the racer’s new tail section out of hard foam to find the good proportions and it was then used as a template for the metal work.” 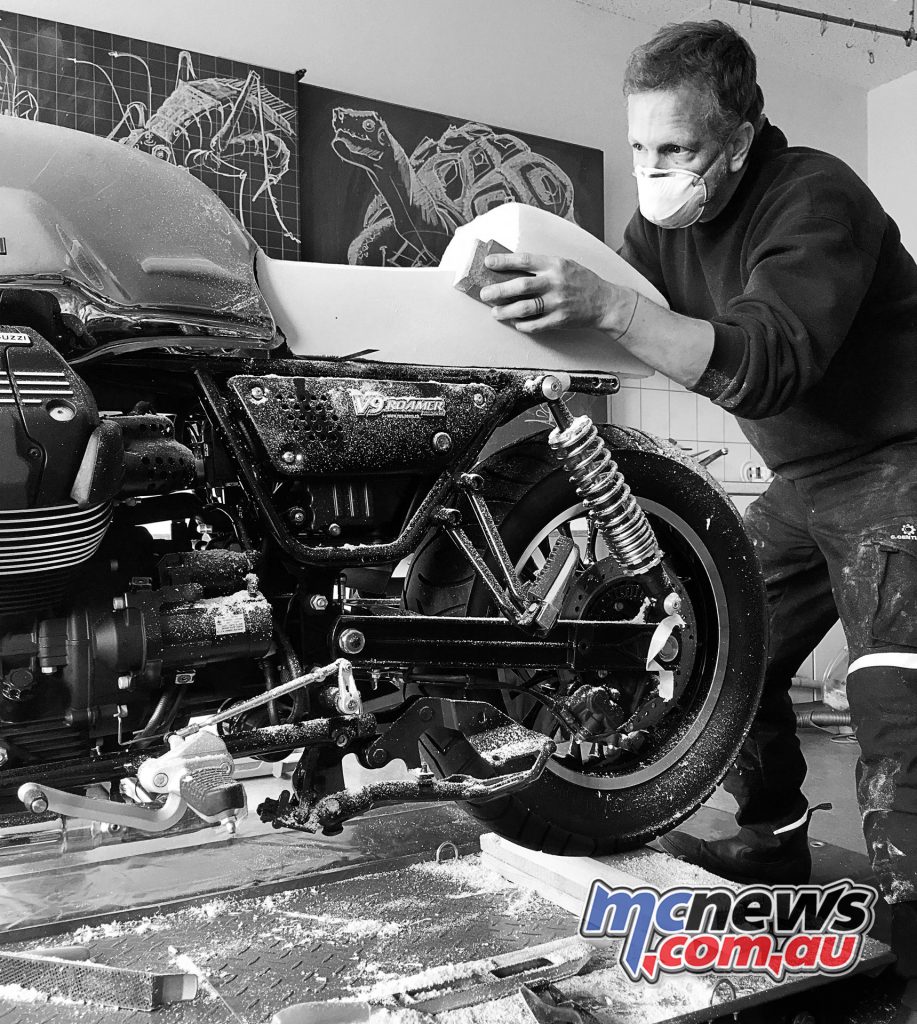 The entire tail section is made out of aluminum and is shaped and hammered purely by hand, by artisan Bruno Bertschy. A new rear sub-frame supports the seat and cowl in the elevated position for a racy seat height and fitted with a thin brown kilted seat which matches the Biltwell grips on the handle bar. 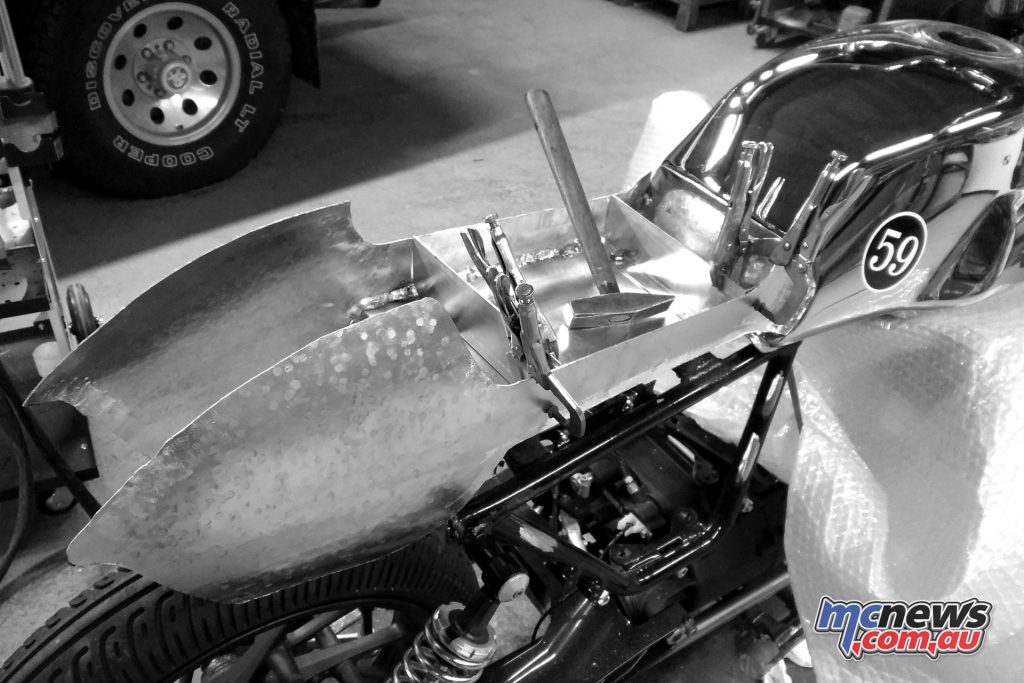 “Our goal was to integrate the technical requirements and engineering goals without affecting the design concept. The fabrications of all hardware parts are sometimes complex, but always tangible, such as the frame construction, adjustment of the footrest system and preparation of various special parts. The conversion of fuel injection back to the carburetor was a challenge, where in addition to the adjustment of the transmitter wheel, also the electronics, ignition and especially the sensor had to be worked on and fitted.” 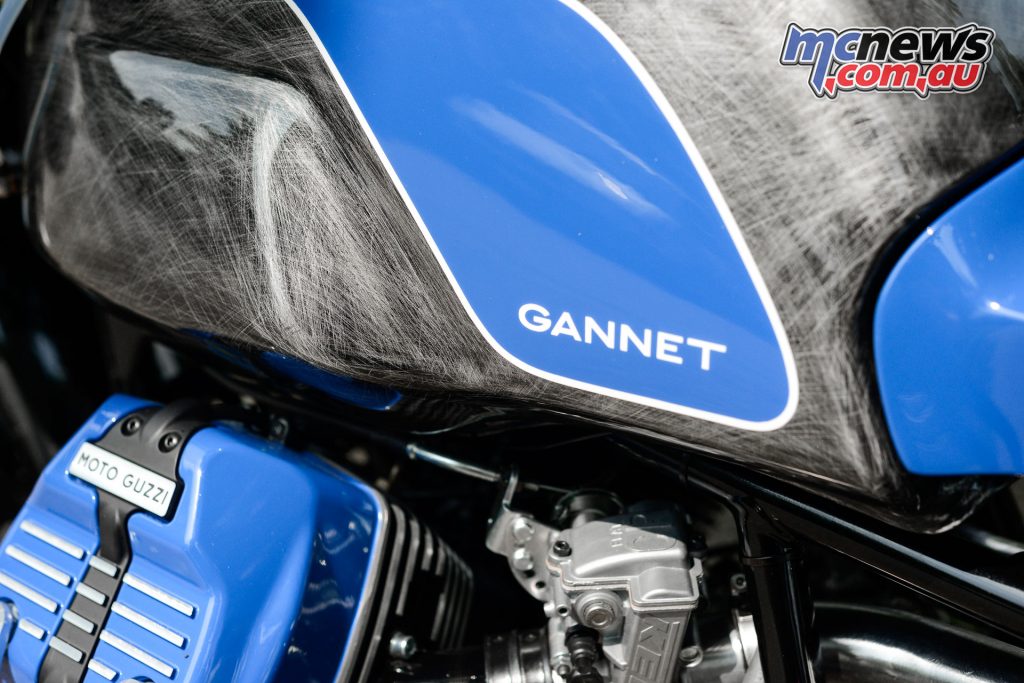 The fine paint work, by Walter Oberli, is a rare mixture of “scrubbed” and high gloss shine with a thick layer of clear coat, which blurs the perception and gives the rugged and scruffy design a very smooth appearance.

The tail section and details are painted in a soft gradation of blue and the cylinder heads were also given the same touch of blue in combination with an aluminum protection bracket – Rhapsody in Blue. 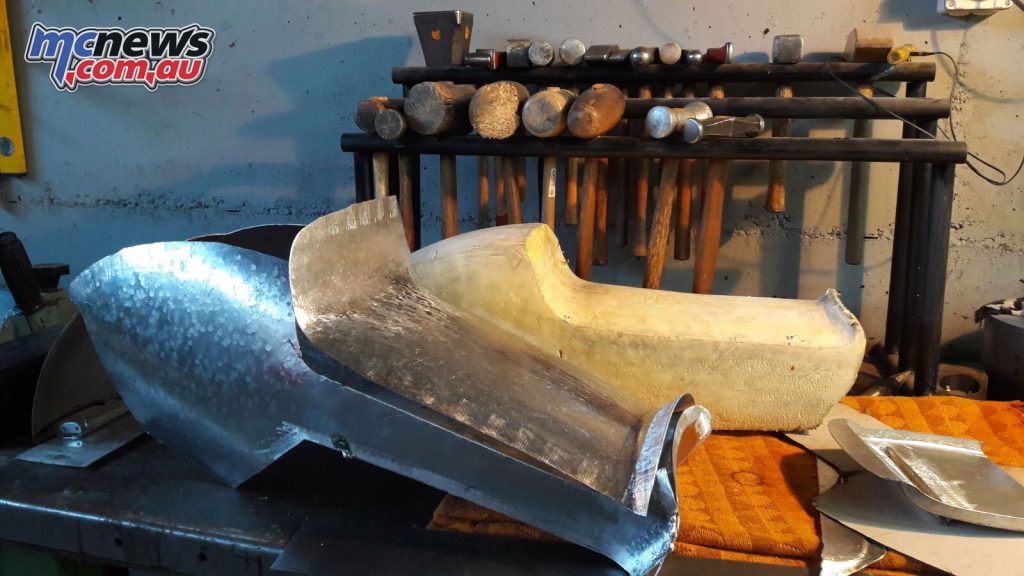 The lower part of the main frame was newly made, cleaned up and adapted with the new racer position of the footrest by CNC Racing (Pramac MotoGP racing supplier). The gear shifter was modified and adapted to fit the Moto Guzzi gearing setup.

The front fender was shortened and equipped with a new anchoring to fit the Öhlins forks, while a new racing triple clamp by IMA was fitted with a custom made steering stem made specifically to fit the V9. 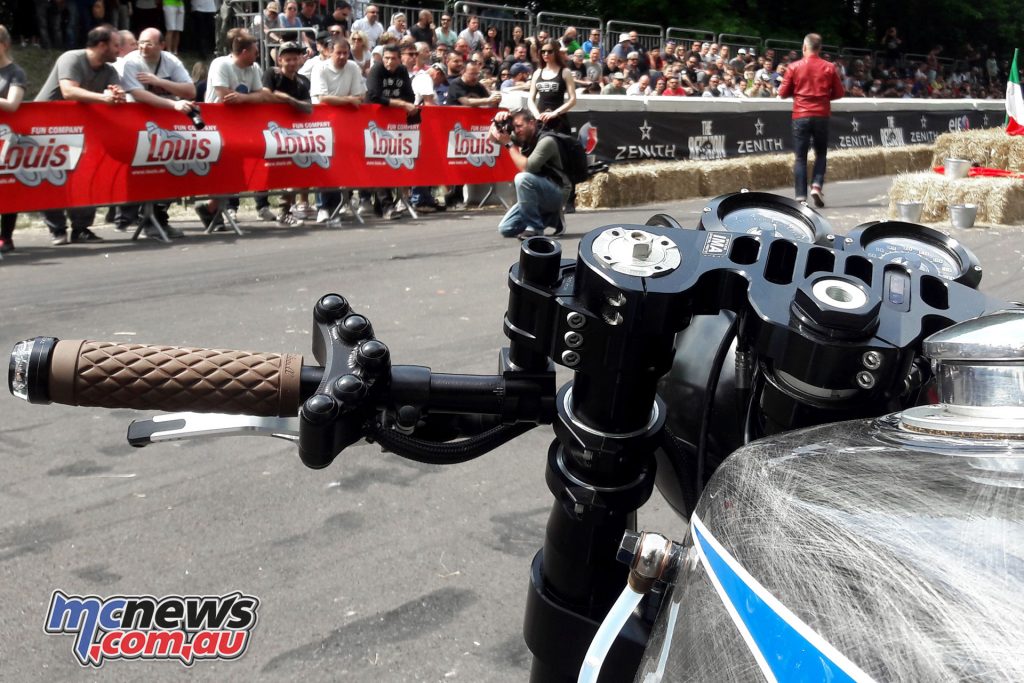 For the clip-on’s were sponsored by ABM Fahrzeugtechnik along with Synto Evo brake/clutch levers in silver/blue/black to fit the color scheme of the bike.

The all black racing control buttons from Jetprime give a menacing detail, the lighting system was sponsored by Highsider and the speed gauges are by Daytona (Paaschburg & Wunderlich) which were fitted into a custom made bracket. 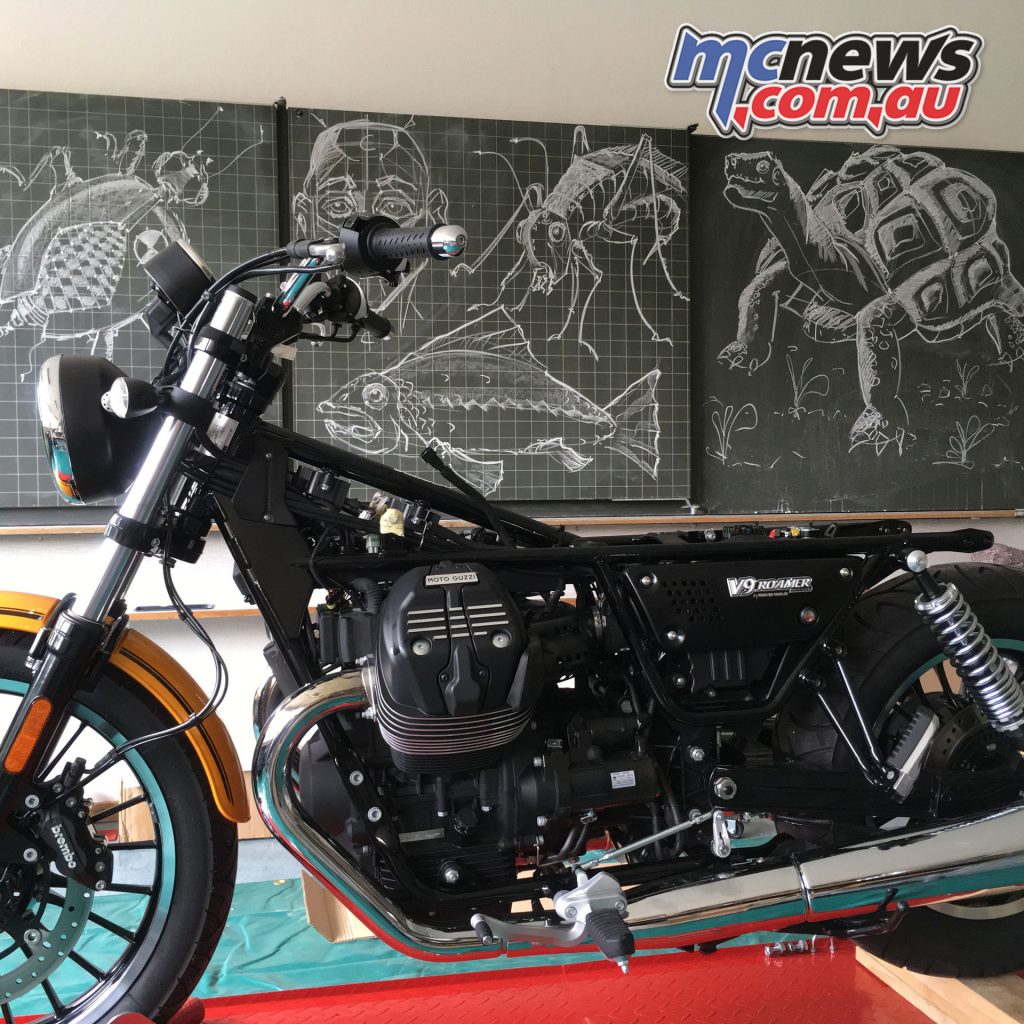 Electrical components are by motogadget, such as m-lock for keyless starting, bar end blinkers, m-blaze and m-unit for the control box.

The 18″ front spoke wheel is specially made by Kineo to fit the new fork distance of 210mm. The rear is also a 18″ Kineo spoke wheel with special aluminum cover plates. The rear wheel is supported by two Öhlins Blackline rear shocks.

The transmitter wheel was adapted with different gearing and the flanges were specially made as well as the racing inspired air intake tubes. 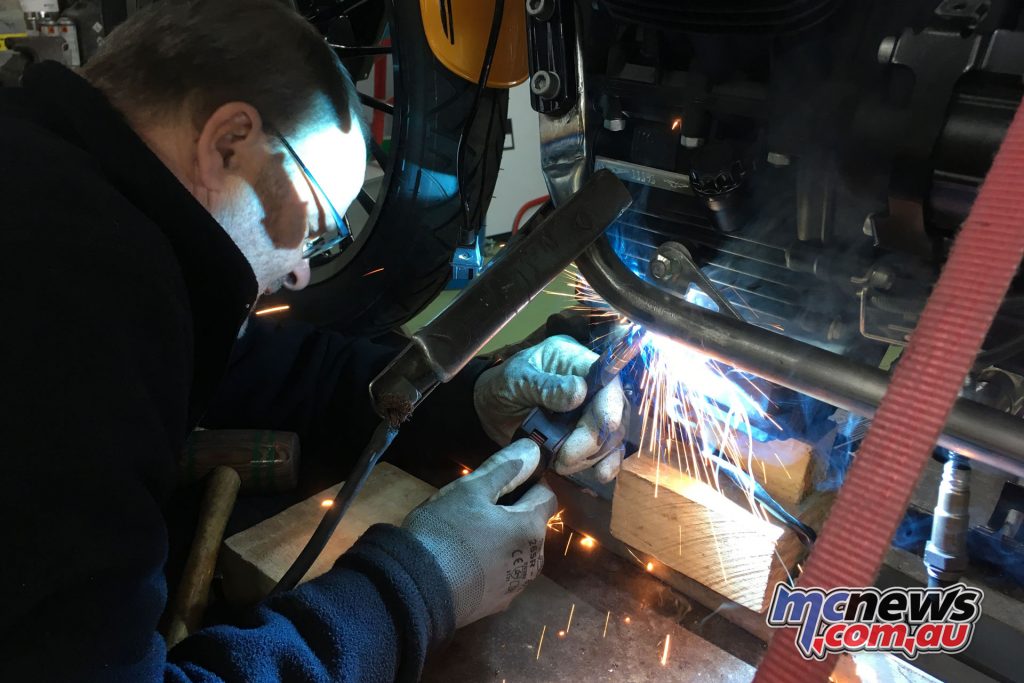 The pronounced sweep of the exhaust pipe design gives a strong visual cue and the twin pipes were bent and welded and blend into two Leo Vince GP Pro trumpets, which make clear that a two cylinder machine is approaching.

“What I like best about this custom build is the coherence of the whole bike, where from the front wheel to the rear wheel the smooth transition from one component to the next passes through. It was important for me and Ulfert that we solve and adapt the individual components in such a way that they give a coherent overall picture.” 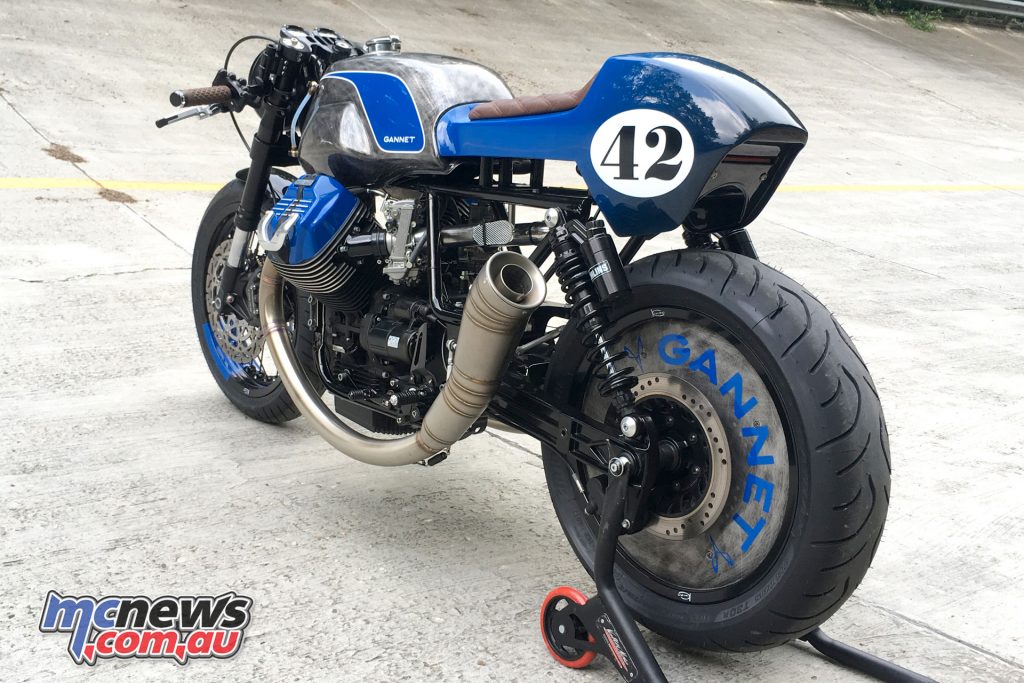 “What’s special about this conversion is that it’s a reduced and minimalist design at first glance, but at a second glance you can see many custom parts and special details. These remain discreetly in the background to give a pure and strong first impression. However, if you dive into the bike, you can discover the sophistication in detail. Special thanks as well to Bruno Bertschy (metal work) and Walter Oberli (paint) for their contribution and fine work.” 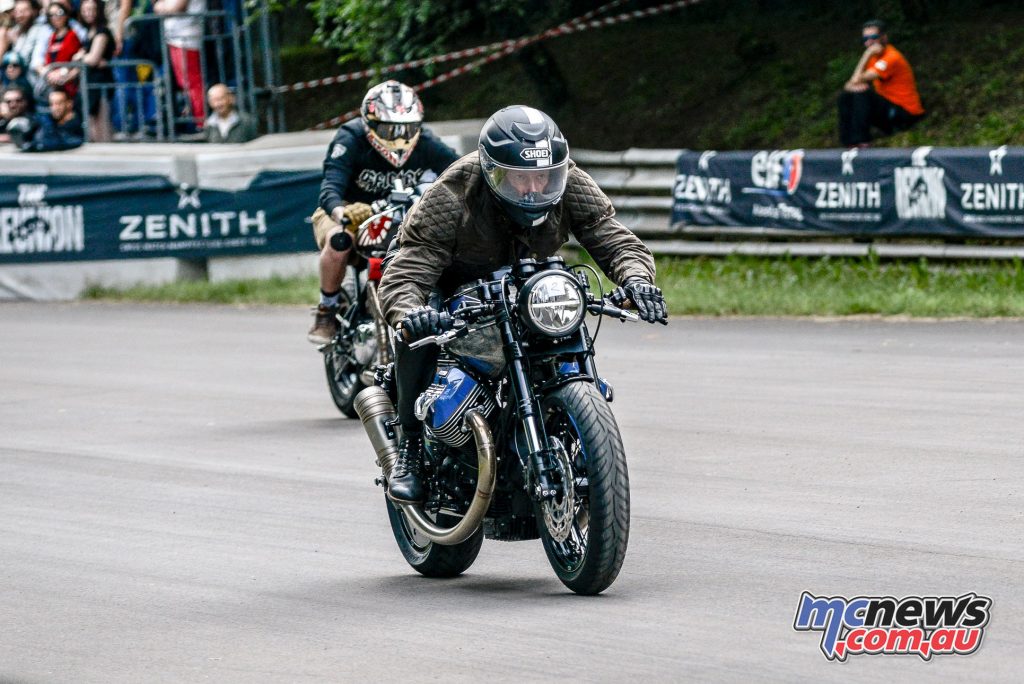 This bike will be displayed at The Reunion in Monza, Wheels & Waves and Glemseck 101 among other events. 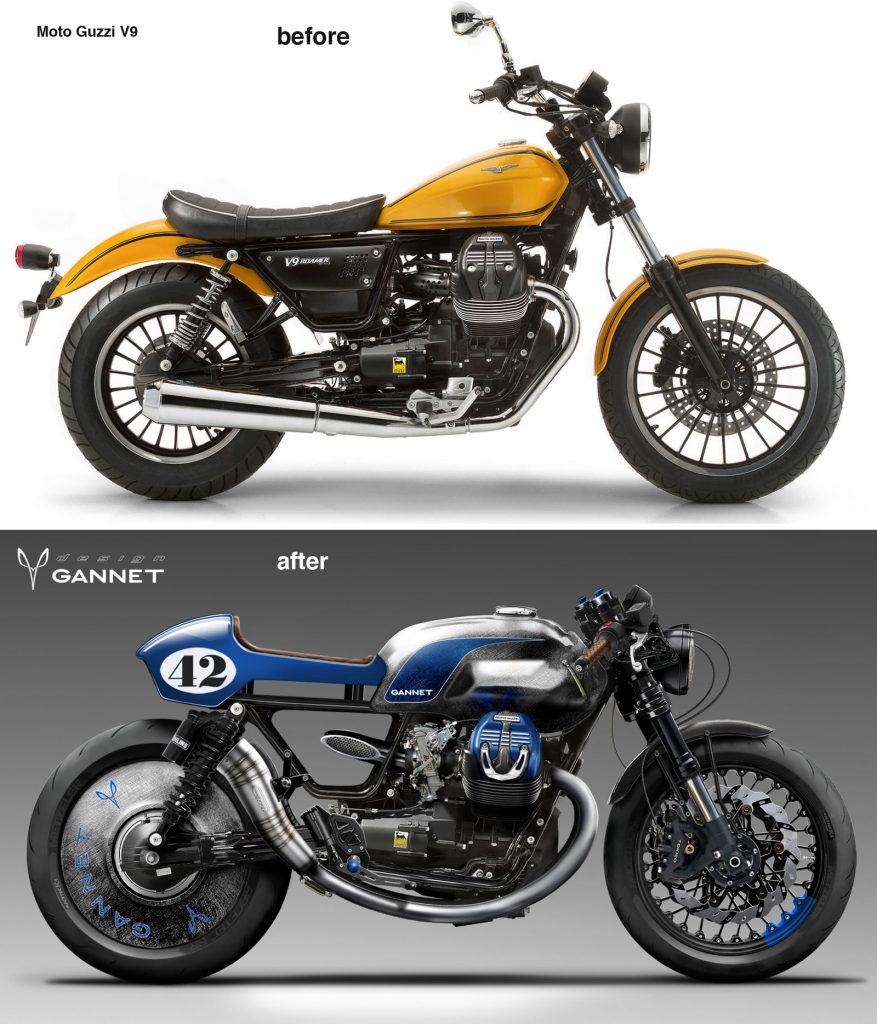 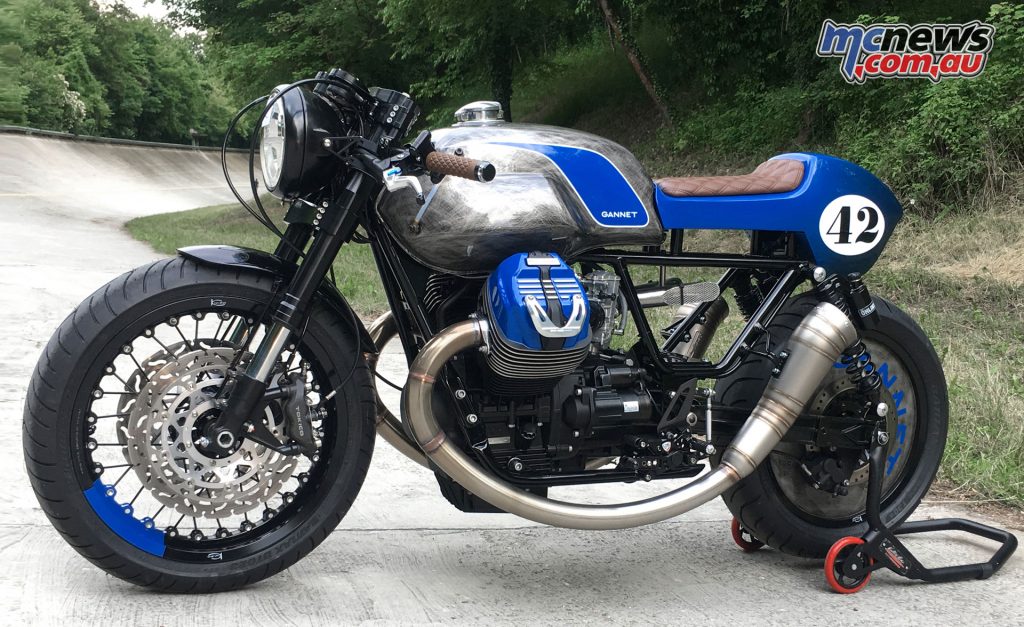 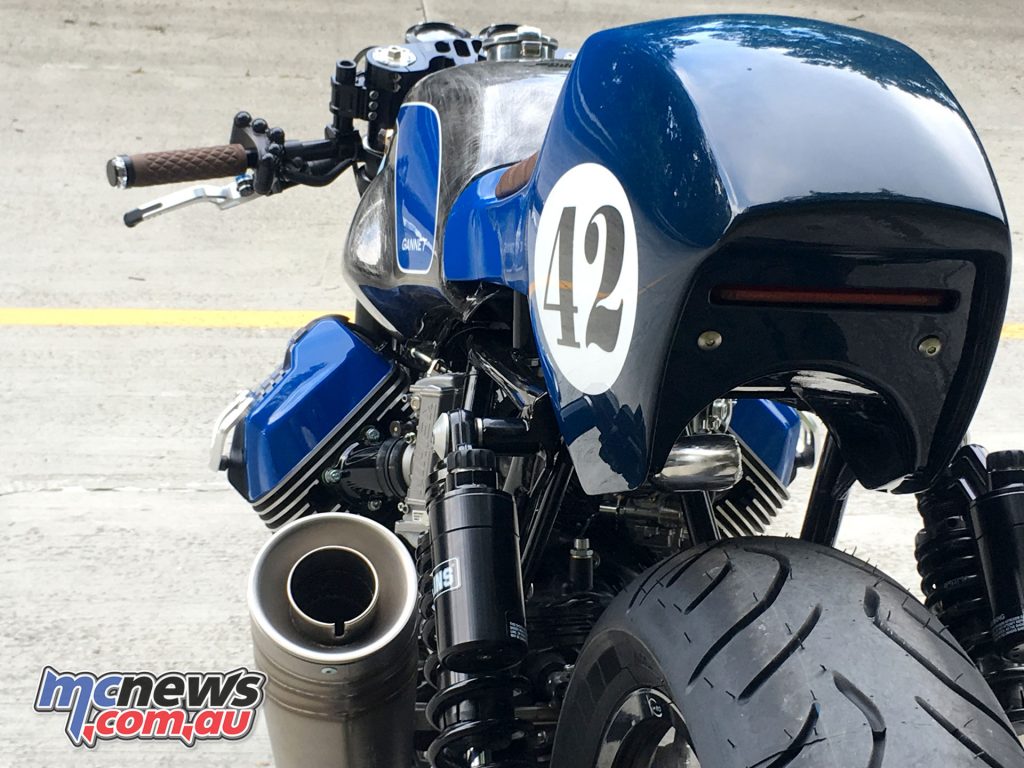 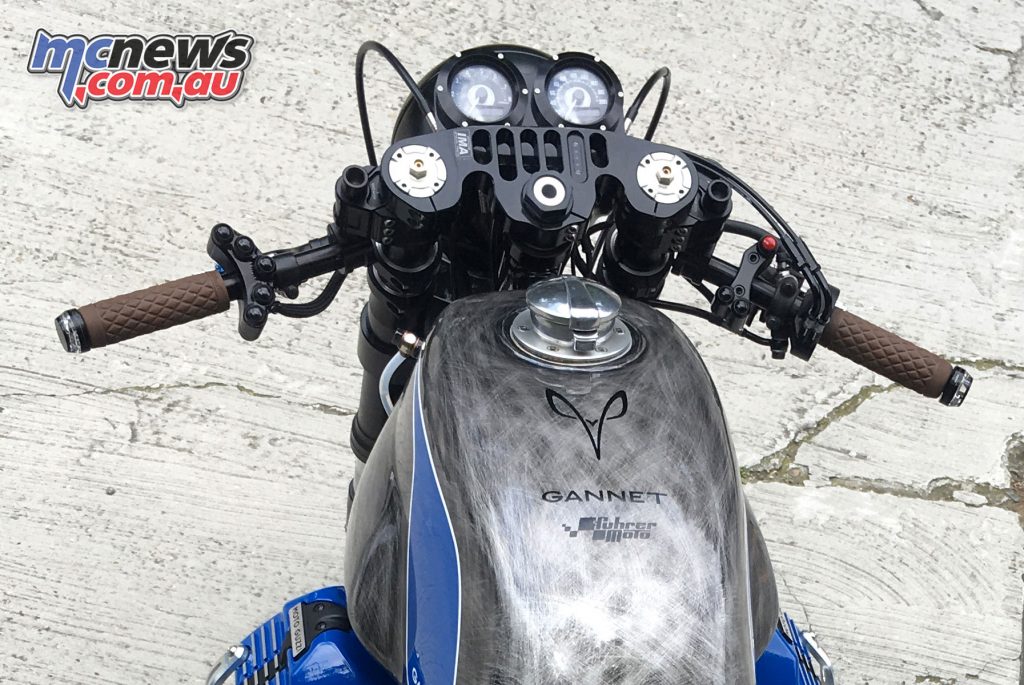 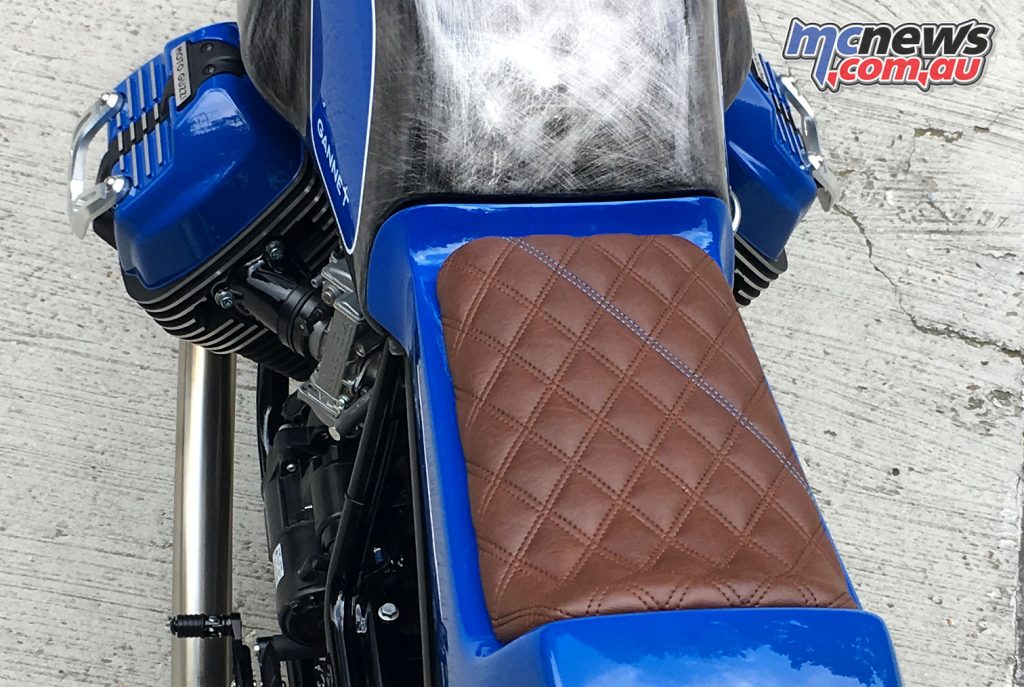 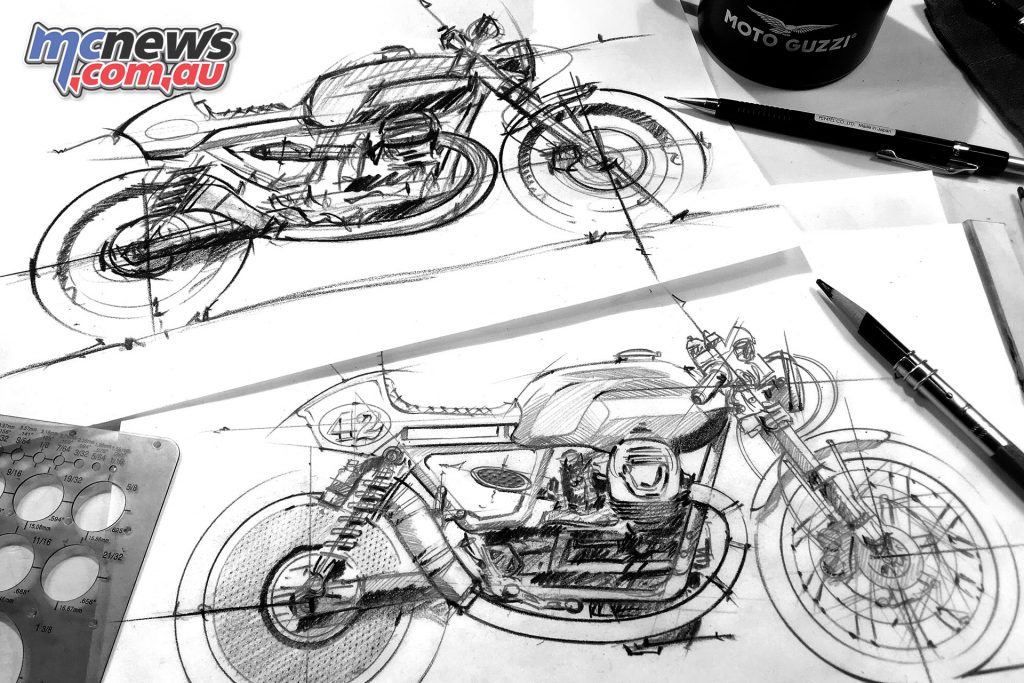