On the Saturday night that I was in San Francisco, I was invited to a party. I was told that nearly all of my American friends from the Island Classic would be there (well, the Californian contingent anyway.) And so it proved to be. However, the venue, well south of the city, proved to be quite a surprise. The party was to be held at the home of Dave and Lorraine Crussell, both of whom I had met at PI, Dave having been the team captain for Team USA on several occasions.

The reason why it was a surprise to me was that I had this idea in my head that Dave and Lorraine lived in New Jersey, way over on the EAST coast of the USA, about 3000 miles away. Quite how this misconception had arisen I do not know though there WERE some members of Team USA who came from there. Anyway, I was tickled to death when I found this out because I have always wanted to see Dave’s collection of vintage Kawasakis and it suddenly became clear that I was going to be able to do so. As I have already recounted, courtesy of Jim Race and Jules Cisek, the party was in my honour and was disguised as a farewell party for Dave and Lorraine who were flying out on the Sunday morning for the Isle of Man and the Manx TT. SO I arrived totally unaware that it was my party!

It was so cool to see nearly all of my So Cal racing friends in the one place and the night was long and filled with hilarity. And, as you can see, we were surrounded by some racing bikes. And, as they used to say in the Goon Shows, “This is where the story really starts.” 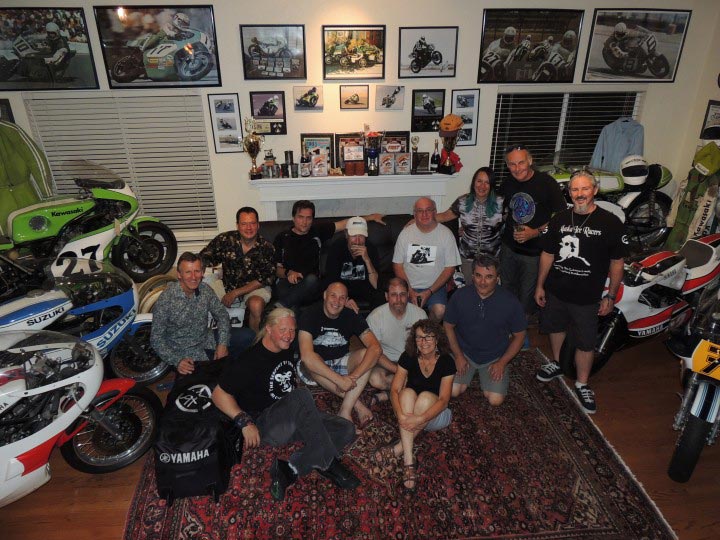 You see, Dave has a collection of Kawasaki racing bikes that would make any Team Green fanatic go weak at the knees. It begins the moment you walk in the front door with several bikes grouped at the bottom of the stairs in the entrance hallway. It continues round into the lounge room (the one in the picture) whose only concession to BEING a lounge room is one settee, and then flows around into the family room where more exotica is on display. Every available inch of wall space is filled with posters and pictures and every nook and cranny is cluttered (though very tastefully) with parts, components, trophies and countless items of memorabilia.

In the last 20 years Dave has sought out and acquired some of the most important and desirable items of 1970’s Kawasaki two stroke machinery and each is on display. Far from being static, each bike is in “going” condition and is regularly run and can be taken out at any time and used.

Now Dave, an expatriate Englishman now living in the US, is no snob. Though his collection is unspeakably valuable, he does not hide it away but has allowed journalists from both the print and the digital media access to his house so that his collection can be admired and documented. This, however, is, as far as I know, the first time that he has documented every bike in the one sitting and I was immensely privileged that he took nearly an hour to “walk me through” the collection and give me chapter and verse on every bike in the collection. So, if you have the patience, I am going to publish the pictures in order as I took them and detail what each bike is, transcribed from a voice recording that Dave did as we walked around his house.

That’s a Spondon-framed TZ750 in the foreground, waiting for bodywork to come back from the shop; I will get onto Dave’s TZ conversion later.

This is the sight that greets you when you walk in the front door.

#10 is a water-cooled H1R. VERY rare. Only two originals still exist. There was a 3rd bike built but it was mainly used as spares. 1976-77. Built for the IoM, ridden by Mick Grant and Barry Ditchburn. This bike is the Ditchburn bike.

#17 is a late model KR750. Distinguished by “lay down” shocks. Early models had vertical shocks. This bike is a 1978 model, lots of magnesium parts, carbs etc. Unusual in that it has two pipes out of L/H side rather than the other way around. Yvon rode it at the F750 meeting at Mosport. This was the last KR model and the wings were du Hamel’s experiment.”

Moving around the corner we come to these. A row of H2R’s

The unnumbered bike is a 1972 H2R. Only 5 of these came to the USA. Team Hansen ran them. This bike has matching numbers and was an experimental bike made up of an H2R engine in an H1R chassis. The frame needed considerable modifications but the experiment didn’t work.

#32 Production H2R 1973. Much better chassis than previous model. 15-20 made altogether, various types sent to Italy, Japan, and US. Was the factory’s biggest year to date. At Daytona there were 6 bikes, Nixon, Carr and Baumann rode the factory bike. This example was ridden by Christian Yem (sp?)

#608 In early 1974, Harold Sellers designed his own frame, with much better triangulation, straight lines between steering head and swingarm pivot, etc, Hurley Wilvert rode one and this one was owned by Larry Few (sp?) It has lots of factory parts.”

Then we moved on.

#21 is a KR500 made up of parts from several bikes. The chassis is a re-manufactured replica of the original frame. Dave has ridden this bike and says it is a great bike to ride.

#7 is a MkVIII RG500 Suzuki. A production example imported into the US in 1982. While numbered with Sheene’s number it is not a “works” bike but the chassis number is only two away from Sheene’s bike. This one has a few non-factory mods, adjustable forks and some other features.

#62 Yamaha 500J. A curiosity in that, while it has a straight 4 engine, the outside cylinders are reversed with the carbs facing forward and the exhaust exiting behind the cylinders. It was based on the OW48 of the previous year which Yamaha made into the production bike . The paint scheme is that of a famous Japanese rider of the era and may be his bike. There was also a Japanese movie called “Dirty Hero” that featured a bike in this livery so it could be the bike from the movie.

#54. Stock 1970 model H1R. Owned by Al Gunther, a well known racer of the day. He had been a factory rider for BSA during the 50’s and 60’s but had retired. This was his “comeback” bike . This is Dave’s first ever racing triple so it is afforded a special display area all of its own.

#27 is an early KR750 as denoted by the upright shocks. This bike was ridden by Jim Evans. Its early date is also indicated by the exhaust pipes that feature stingers rather than mufflers. Ron Pierce also rode this bike.

Unnumbered bike. TR750 Suzuki. A later iteration of the model, it has, as all TR750’s did, a street bike engine and frame number. The headstock and engine cases are also straight from the Water Buffalo. This one, however, has lots of exotic “works” parts.”

Moving into the family room we find these.

#64 1971 H1R. Ridden by Rusty Bradley in 1971. He had been the AMA Junior champion in 1970 and this was his first ride in the Expert class. Unfortunately, he died riding this bike at Daytona 1971, his first ride on the bike. The bike resided in the AMA museum for many years before being sold. It passed through several hands until purchased by Dave.

The last bike in the classic collection is a 1991 YZR500 Yamaha. This bike was run by the factory in 1991/2 and then sold on to the team running Jeremy McWilliams in 1993. McW crashed the bike often and kept the team busy repairing it. Dave has ridden the bike at Laguna Seca and reports that it is remarkably modern in feel despite its age.”

Then we moved into the garage. 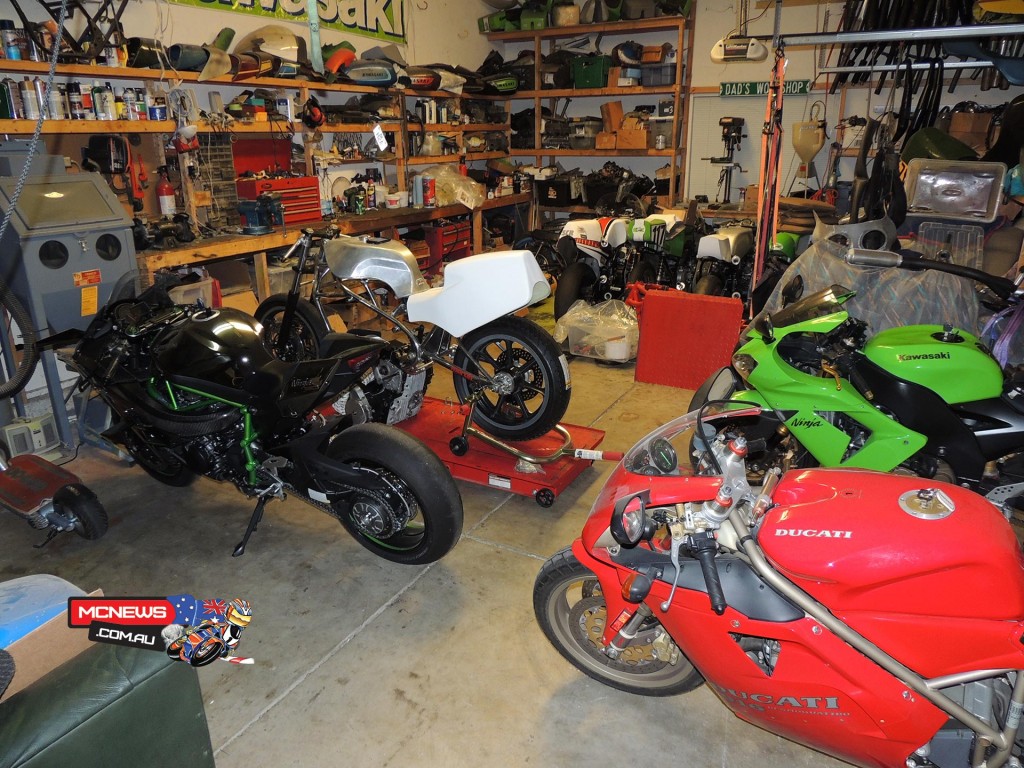 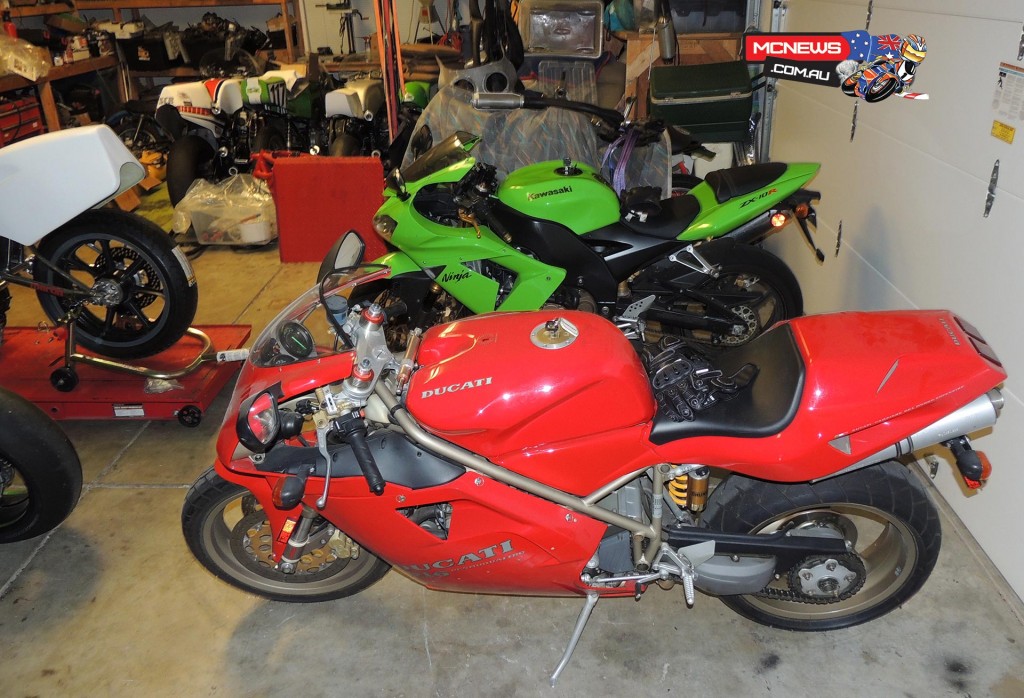 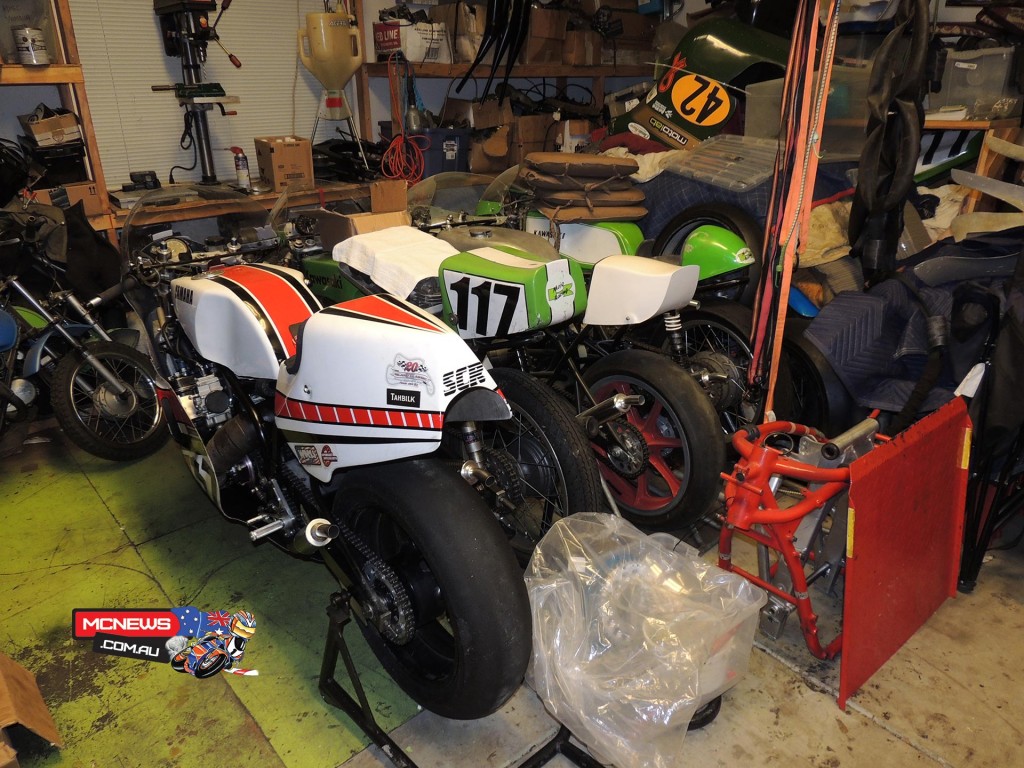 Pride of place is a brand new $60,000 Kawasaki H2R supercharged. Later in the night (much later), Dave warmed it up and revved it, HARD! It’s the only bike exhaust note that I have ever heard that literally hurts your ears; they were still ringing days later. A Moto Martin frame is being prepared for a Kawasaki 1000 engine in preparation for next year’s historic racing calendar in the US. Also in the garage is a 916, a ZX10-R a couple more two stroke Kawas and another of Dave’s TZ750’s, this one the model run by Rob Mesa at the Island Classic earlier on this year.

Dave’s conversion to TZ’s is an interesting story also but it basically centres around his quote to me when I last interviewed him for MotoPod. “The TZ750 is the bike Kawasaki should have built.”

Here’s some more of the memorabilia that adorns the household. All a bit too much to take in, really.

In closing, my sincere thanks to Dave for this. I never dreamed that I would even see this collection let alone be given the guided tour! Green with envy? Hell, yes.

Up to 70% off Gas Repsol Honda Range