After finishing the 2016 season with 11 wins, including six in a row, the Aruba.it Racing – Ducati team is preparing to tackle a thirtieth Superbike World Championship season. 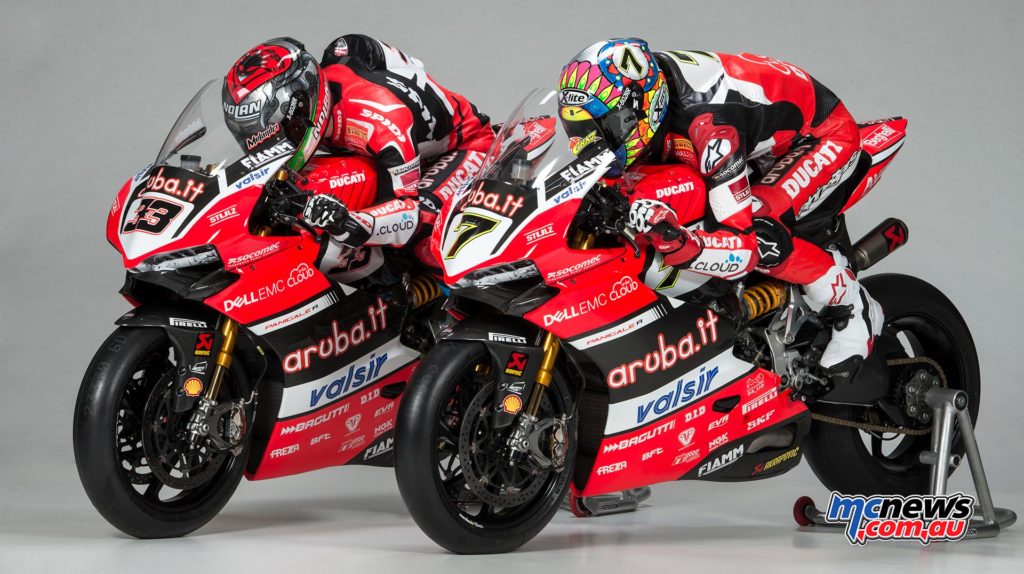 This week saw the presentation, at the Aruba Data Center IT1 in Arezzo, of the sporting activities, riders and bikes for the 2017 championship. Now in its third year, the partnership between Aruba.it and Ducati has been characterized by constant competitive growth, and the time has come to aim for the Riders’ and Manufacturers’ world titles. 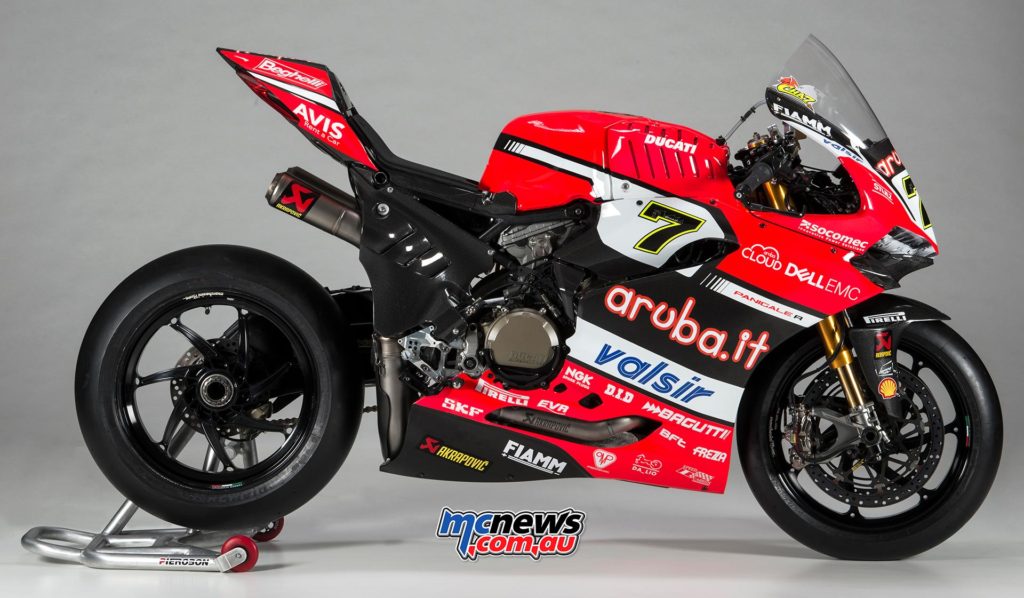 The new livery of the factory Panigale R machine, which presents evolutions in chassis, engine and electronics, was also unveiled. Riders this year will again be Chaz Davies, coming off the back of a record-breaking season which strengthened his status as one of the top riders in the production-based racing series. 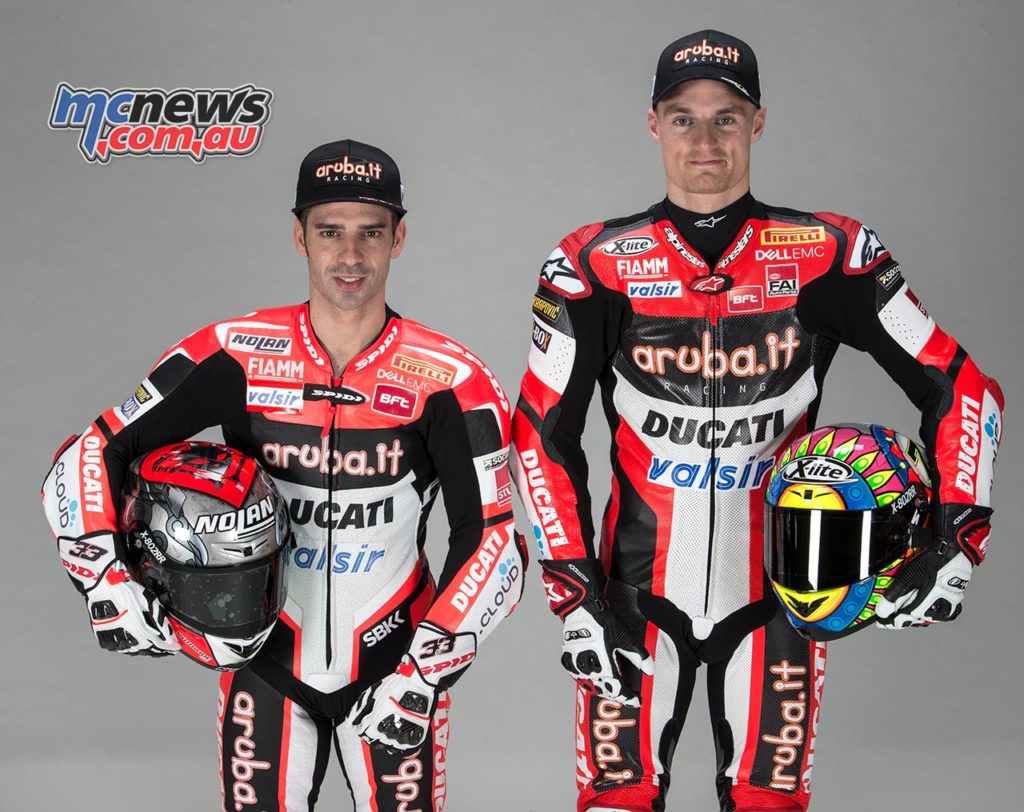 The SBK paddock is also buzzing over the return to racing of Marco Melandri, the vastly experienced and ultra-quick Italian, who in Superbike has already scored 19 wins and 49 podiums in four years and who has already demonstrated he has reached an excellent feeling with his new Panigale R. 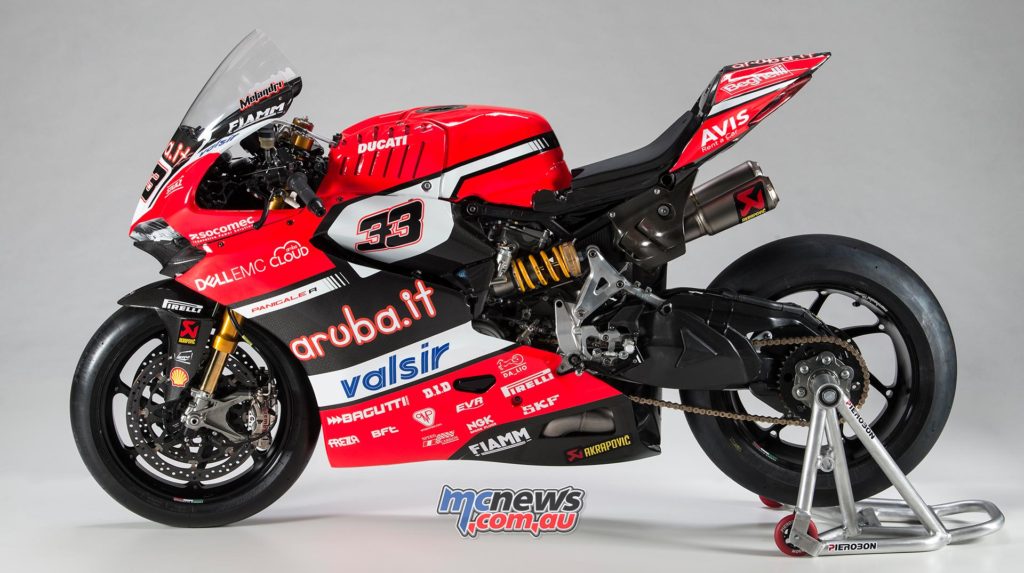 The Aruba.it Racing – Ducati team is now preparing to head to Australia for two days of pre-season testing at Phillip Island on 20-21 February, just a few days before the opening round of the season the following weekend at the same circuit.

“Eleven wins and a total of 22 podiums in 2016 represent a record and are a perfect example of the constant progress made over these last two seasons, but our objective remains the title and we are here to aim for it under the sign of continuity and evolution. Above all, by renewing and reinforcing our links with Ducati and represent it, together with Feel Racing, as the factory team in the Superbike World Championship in the future. Then, by extending our commitment with Chaz Davies, a rider of universally recognized merit and quality, and by flanking him with a champion of the calibre of Marco Melandri, who has already demonstrated true speed and professionalism right from the first tests with the bike and the team. Finally, we have also made several technical and organizational changes, and we are convinced we have all the right cards to succeed.” 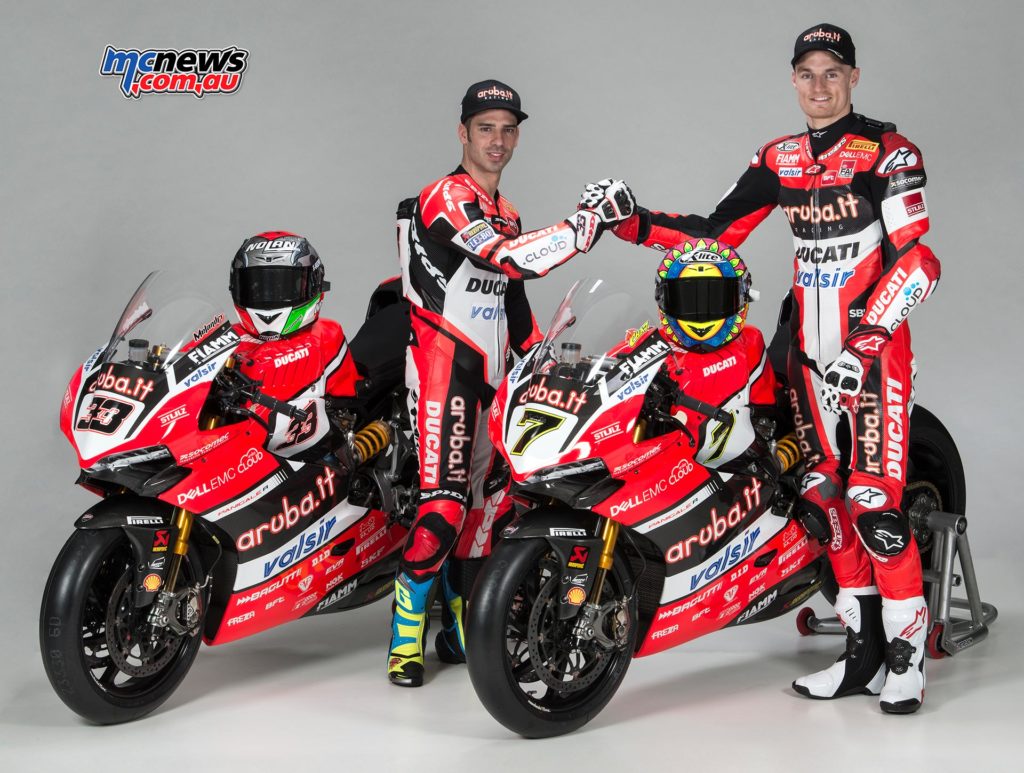 “The success obtained in 2016 by the Aruba.it team and Chaz’s six wins in a row helped to conclude in fine style an important year for Ducati, which celebrated its ninetieth birthday with constant growth, both on a sporting and commercial level, exceeding 55,000 bikes sold in one year and notching up a new record for the company. Superbike is for production-based bikes and for Ducati it has always been a strategic and important championship, which allows us to develop extraordinary projects such as the Panigale R. A championship where our bikes and riders have written fundamental chapters of bike racing history and where we want to maintain our role as protagonists. Racing with Aruba.it and with two riders of this calibre, allows us to be optimistic and confident for the 2017 season. Special thanks go to Stefano Cecconi, who is our enthusiastic partner in this operation, for these three years of constructive collaboration and for sharing with us the aim of bringing back the title to Borgo Panigale.” 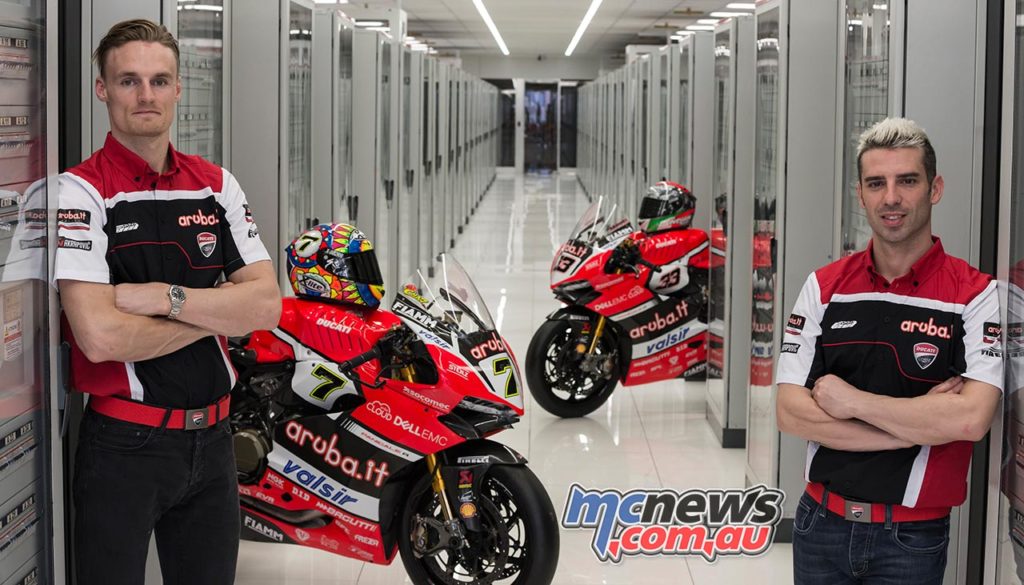 “In the last few seasons the Panigale R has constantly improved from a competitive point of view and, thanks to the synergy between the MotoGP and SBK projects, we have had a lot of success. However development never stops: in the winter tests we brought several innovations to the engine, chassis and electronics, and now we want to express our full potential and win the Riders’ and Manufacturers’ titles. We know that our rivals are going to be tough to beat, but we can count on two riders of undisputed worth such as Chaz and Marco as well as an extremely competent and close-knit team, so we are looking forward to the challenge that awaits us with confidence.”

“The start of a new season is always an exciting moment. We are ready to start from scratch, even though we hope to maintain the form we had in the final part of last season. During the winter I realized that nothing stays still in this sport, we are all anxious to improve and redefine our own limits. Aruba.it and Ducati are giving everything to improve the bikes we have at our disposal, and every day we make another step towards our aim, but the best is yet to come.” 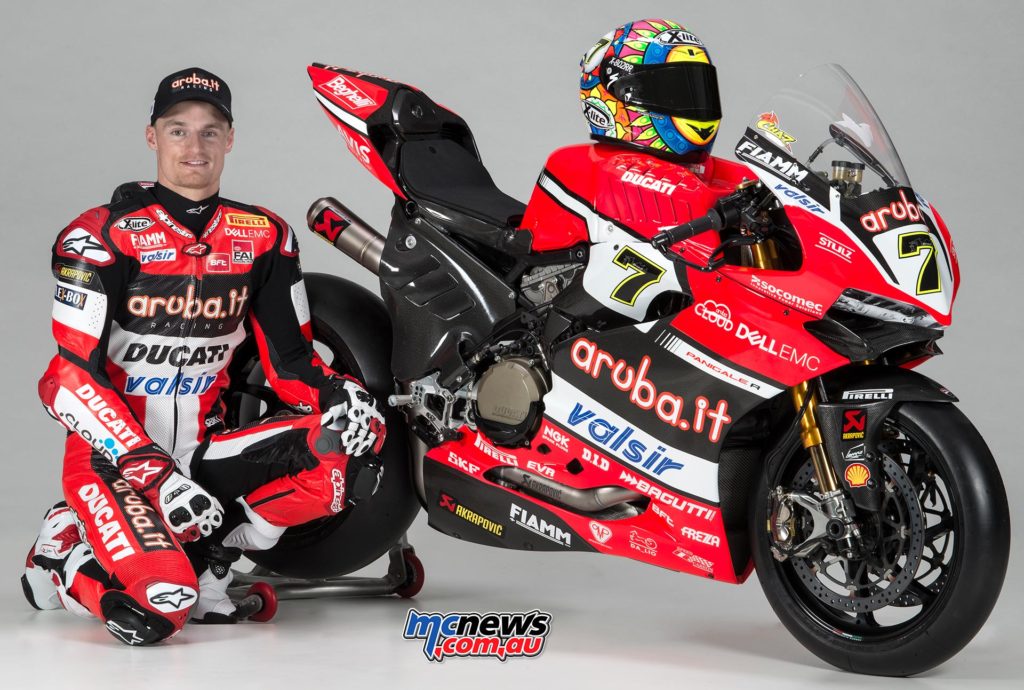 “I’m really excited about this opportunity. My feeling with the Panigale R and the team has been great ever since the start, and lap after lap we have discovered our potential, getting closer and closer to the leaders. It’s difficult to make any forecasts because the SBK championship is more competitive than ever, but I can’t wait for the lights to change at Phillip Island to have that feeling of adrenaline again that only racing can give you. It’s not going to be easy to beat our rivals, but we’ll do everything possible to be ready on time, after which…anything is possible.” 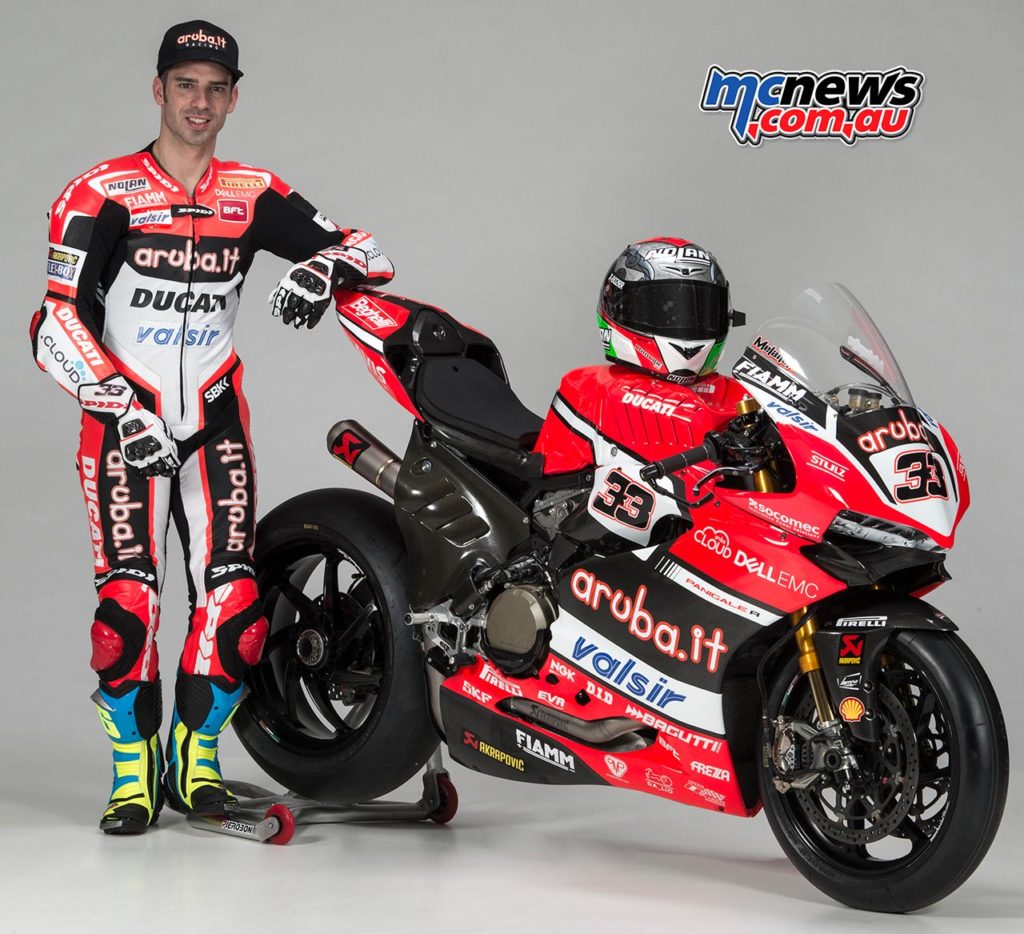 43 Superbikes on grid for ASBK opener at P.I.

WorldSBK back in action at Aragon again this weekend

43 Superbikes on grid for ASBK opener at P.I.