Reigning EnduroGP World Champion Matt Phillips, Australia’s shining star in World Enduro, with multiple World Championships under his belt, is set to retire from the world stage at the end of season 2017.

Phillips has announced he will see out his 2017 contract with Sherco and then call it a day.

“Earlier in the year he seemed comfortable, but he got over it during the season. I wouldn’t say that he’s bored with it, but he’s certainly not enjoying it as much as he has in the past.”

Phillips, from Wynyard in Tasmania’s north-west, has spent the past five years living in Italy.

“The last five years we’ve been a bit hamstrung,” his father said. Its not all beer and skittles. It sounds very romantic living in Italy or France, but for him its all testing, training, testing, training and racing. Its hard work.”

Phillips told MCNews.com.au last year that he did not think much of the new direction that World Enduro has taken, with the move to the new EnduroGP catgory, which, despite him not being a fan of, saw him take out the 2016 EnduroGP World Title.

Phillips talked to EnduroGP after his announcement but seemed to bite his tongue a little perhaps about what he really thought about the direction the World Enduro Championships have taken of late.

Matthew, why did you decide to leave EnduroGP next year?

“This is the question everyone is asking now! I spent five years on the World scene, won four titles, was once Vice-Champion and this season I’m 5th at the moment – but I hope to get the podium! It was a great experience for me with great results despite a big injury. I made nice memories, met friends, worked with top teams and professional mechanics. I have been living the dream! This was not a decision I took lightly! But I’m missing the Australian lifestyle, and I must admit that lately I’ve not been 100% focused on the races. I need a break! I need to go home and find the fire before it goes out! The fans don’t want that, and me neither.” 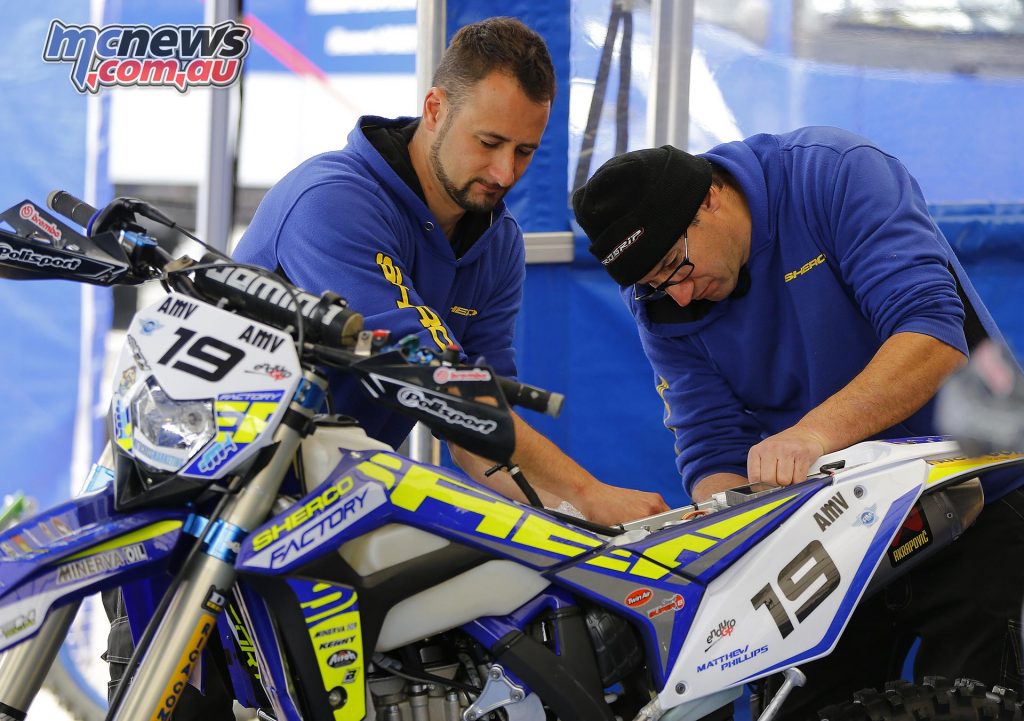 Why did you announce your plan so early?

This is the time when the teams start recruiting for next season! So I decided to announce this now to let everyone know that I was no longer “on the market”. It’s time for me to turn to something else and find a job…”

What are you going to do next season?

“I hope that other people can fulfil their dreams as I did! I now have four World Champion titles on my CV, and I think that has value … I’ve talked with several companies with the aim of becoming one of their representatives, attending numerous events for them and trying to attract more customers to their brand. I would like to ride in Australia, but also be able to come to one or two Grand Prix. I have never won the Australian Off-Road Championship and that could become one of my goals. I would also like to ride in MX, and why not in SuperEnduro. I want to enjoy a bit of everything like Mike BROWN does!”

Are you retiring or is this just a sabbatical?

“I hope it’s a break! I would like to have the opportunity to ride at races like Le Touquet, but I will be back on the World scene in the future, for sure. And why not welcome the EnduroGP to my home in Tasmania…”

“Yeah, exactly! I would love to have a GP in Australia and another in Tasmania… I think at the beginning of the season the conditions would be ideal. It would be the end of the summer there and we could have difficult weather conditions, which would make the race more challenging. Many Australian riders would want to compete, and for sure they’d surprise many of the World Championship riders with their speed. We have so many places where we could organise races, but my first choice would be a town near the ocean like Penguin – there’s a nice cross-country track there and the terrain is very mountainous. There are plenty of options! I think we have enough people ready to organise an EnduroGP round too.”

When you arrived in the World Championship in 2013, did you think you could win so many titles in just 5 seasons?

“Never! I remember having a phone call with Yamaha Australia before leaving. Stefan MERRIMAN was my teammate at the time, and he had told me several times to try my luck in the World Championship. Stefan is a person who weighs each of his words, so when he repeats something to you many times, there’s no need to think about it much … you just have to listen and follow his advice! So I was on the phone with the Yamaha bosses, they offered me a very nice contract to stay at home, but I did not even listen to the amount of money on offer; I simply thanked them for their interest and told them that I only wanted one thing: to win a World Champion title!”

Has EnduroGP given you something other than titles; made you grow in your professional and personal life for instance?

“Yeah, for sure! Otherwise I would not be here today! I would like to tell all the young riders to come to the World Championship, train hard and be ambitious. You see so many different cultures, and meet great people. You make so many friends, it’s worth every moment of training, effort, and the risks you take. You learn a lot as a person!”

What do you think about the World Championship?

“The creation of the EnduroGP class brings back the interest to this series and the level of racing is impressive. Adding races like the Lake Päijänne also benefits to the Championship and I can’t wait racing in the UK and in Germany. I also think that the Championship needs to reinvent itself a bit. We have to find a way to bring more riders back … reducing to two categories has brought a lot of interest to fans but the gap is too big between the top guys and the other riders. We have to find a way to bring the enthusiasts and riders from the European Championship to EnduroGP. You have to create an event, not just a race, every GP must be a big party.”

What is your best memory?

“That’s not an easy one to answer! I’ve had so many good times. I’ll choose … Brioude 2014, my victory on Saturday when I was still recovering from a fractured foot. I trained only once before the finale in France and we were fighting with my ex-teammate Ivan CERVANTES for the E3 title. Just before the last special test, we were on the same second. I went first into the test, and when it was his turn to go he had a small crash in the test. When he came across the finish line, I saw his time was slower than mine and I immediately felt all the pressure from the day just melt away – it was a really special feeling! He was the first to congratulate me though, Ivan is a great champion and really professional. The next day I won my first Senior title, just one year after my Junior title!”

Let’s talk about your team manager, Fabrizio ‘Azza’ AZZALIN… This announcement must have meant heartbreak for him?

“Yes, at first it was very difficult for him to accept the decision. He immediately asked me ‘Why?’, I told him I was enjoying EnduroGP but I needed to find a new challenge. Azza understood me, he saw me lose motivation during the season, he saw me come back from Parc Fermé a few times with a sad face. He therefore supports me 100% in this decision but he also told me that if I wanted to come back, I only have to call him and he would offer me a contract! Fabrizio has always listened to me and helped me, like the whole team. After my Junior title, when Husqvarna had just been bought out by KTM, there were a few months of confusion. I did not expect to leave CH Racing and did not talk to any other team. Then at the Six Days, Azza told me to leave the ship because he did not know if Husqvarna was going to keep him … my mechanic Mauro went to see Fabio (FARIOLI) and advised him to recruit me as they did not know what the future held. I have tremendous respect for all of them, they are exceptional people”

Phillips is currently fifth in the 2017 title chase and will race this weekend in Portugal.