Since departing the Australian Superbike series in 2009, I have watched the series with a great deal of interest. The racing has been by-and-large fantastic and certainly the top five riders have shown they are world class and put on a worthy show in the company of WSBK, MotoGP and the V8 Supercars.

Where possible, I have helped out a number of riders and people involved in the series- from media training, to PR, advice on social media, disaster management and more. For this I have not been paid a cent.

Recently, there was an embarrassing, but hardly surprising “leak” when some MA board meeting minutes were put on their website that were quite damaging. Their response:

“These minutes, though final, were not for general distribution and should not have been made publically available as they do not provide the necessary level of context and could potentially be wrongly interpreted – they have since been removed from the website.”

This is of course a total crock. I know this because it’s pretty much what I would have said, and the devil recognises his own.

Aside from the fact that most of the items come from the “Well Of Course It’s True” file, to focus on the publishing cock-up would be a mistake. They key points here are that IEG are seeking more money (either now or in 2012), Eastern Creek is still a total shut out (despite the huge turn out in 2009) and we could have <15 bikes fighting it out for the ASBK Superbike title. The key takeaway here is that after three years IEG have been unable to establish the series to the point where it is self sustaining though sponsorship and other monies. This despite pretty much reducing staff to one full timer and a few ancillary event staff. The riders have voted with their feet- either defecting to Terry O’Neill’s series or more often than not, giving it away on a temporary of permanent basis (Hi to Shannon Johnson, Scott Charlton and Aaron Morris!)

I have a clear conflict of interest here as I think IEG are not fit to run the series but it’s also true that behind the scenes it’s been the same old shambles.  It’s a fact that I left on poor terms after the company were unable to guarantee my salary in the off season.

So that’s the dirty washing aired. And this is not to single out IEG. My dealings with IEG and MA soured me against being involved with the series at an organising level again. (And the fact that I am at 100+ days unpaid with The 6 Hour shows that aspirant promoter James Spence is only capable of more of the same). 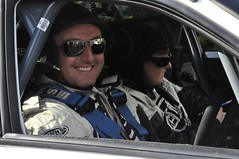 All of this is not to  say that I do not care what happens to racing and racers in Australia.

At present the mess that is Australian road racing can be laid out thusly:

These are not the only factors in play. You also have a number of riders who, while talented on a bike and very determined to do their best, are not keen to do what it takes in a media, marketing and social sense to become “fully pro” and therefore become a marketable “property”. It’s not necessarily their fault, but if you model yourself on those who market themselves well on the international stage, then you would see some riders who seem to get good rides, despite not having the best results. The model exists (V8 Supercars), but it seems that sometimes the riders would rather focus on just the riding, when it’s a proven fact that being marketable is as important, if not more important than the racing. 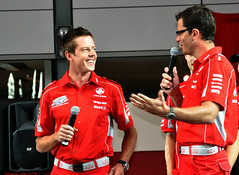 James Courtney and Garth Tander- HRT drivers and famous Australia wide, earning a solid living (!!) in a series that is world famous.

At the Phillip Island MotoGP event of 2010, I had an extended discussion with Wayne Gardner onstage at the Autograph signing (where I was hosting) and off stage later. His attitude was very negative. He and I agree that MA need to improve, but we most certainly disagree on the spec for ASBK. Wayne thinks it ought to be Superstock (or Prostock or whatever they are calling it this week), while I agree with the current riders who argue that riding a lower spec machine will make an international step up harder. Indeed I have had it noted to me that going to Moto2 with it’s rather lowly tuned 600cc Honda motor is all about learning how to tune a bike’s chassis and suspension. If you have no experience of a bike that has such variables, then you’re behind the eight ball before you begin.

What happens next? What can be done?

I have no intention of leaving my current role in the V8 Supercar paddock for a return to Superbikes so I offer these suggestions without any intention to be the executioner nor crown wearer. After my tenure as the Media Manger for ASK in 2009, I was  the Media Manager in 2010 for the Australian Rally Championship. Today I am a media consultant for the Walkinshaw Group. So, in the last three years I have been able to get an insiders view of three of the top motorsports/teams in the country. Of course each has room for improvement (and I would note that in 2011 the ARC is set to really take big steps) I think the V8s will also move ahead with the COTF set to deliver cost savings that may set the series up for the long term.

The Superbikes however are set for decimation. It may not be a bad thing if IEG pull the pin (or just fold) and MA are forced to send the series back to the old days of having state bodies and prominent clubs run a local event with national status.

But that’s not quote a step up. While I have high regard for the volunteers and organisers who run club and state championships, without a national direction and approach, the series will be a glorified club championship.

Formula Xtreme is not a true alternative while it remains an east coast/NSW-centric series and Terry remains hell bent on simply cannibalising the Superstock classes of ASBK while gifting Yamaha class wins in every category. He is well within his rights to only seek to service the main population centres (and therefore racers), but that’s hardly grounds for a true national series. His television deal is laudable and a great boost to those seeking to compete, but ask yourself; who will step from his series to International acclaim? Yeah. Exactly.

Terry is a wily character and in many ways is better than IEG and MA, yet I don’t think having him run the series it total is the answer either.

This situation calls for boldness.

Wayne Gardner and Mick Doohan at the 2010 Phillip Island MotoGP- both were highly critical of MA and current ASBK. The question is are they prepared to help bring a new era into being?

This alone may not fix motorcycle racing in this country. But unless those involved are bold and determined, then last one out turn off the bikes. 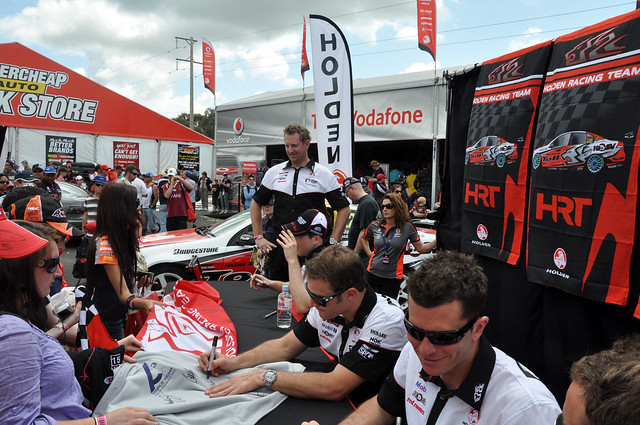