RedBud most certainly turned to RedMud on the weekend when the American circuit hosted the 2018 Monster Energy FIM Motocross of Nations.

Thousands of spectactors braved the mud to watch the action first hand and many of them are still stuck in the parking areas as tractors try to drag cars and RVs out of the quagmire.

“It is an incredible feeling to win the MXoN with Team France for a fifth time in a row. I really have no words to describe how happy I am. Conditions were far from ideal during the whole weekend here at Red Bud, but we made things work to our advantage. I gave my best in both motos and kept pushing until the very end. A special thanks to all the members of my Rockstar Energy Husqvarna team. Winning this trophy with Team France is the best way to wrap up a long season.”

Coming in second by only a two-point deficit was the Italian team of Antonio Cairoli, Michele Cervellin, and Alessandro Lupino.

“We are very happy to be on the podium. It is amazing actually because last week [after the Imola crash] we did not expect to be here. We had a strong race and both days I felt good on the RedBud track. We could have won and we ‘had the cards’ to do it but I threw it away in the first moto with a crash and Alessandro also in his first race. It’s bad when you lose by only a few points but this is the Motocross of Nations – the best race of the year – and we are very happy to be on the podium. It was a good end to an amazing season. Congratulations to France for a strong race and to Holland also, a shame about the bad luck. This [the results] is good for European motocross and we are proud of our series. Thanks to everybody and to Youthstream for organising a great event again.”

Taking the final spot on the podium was team Netherlands led by Jeffrey Herlings along with Calvin Vlaanderen and Glenn Coldenhoff.

“Me and Glenn did a great job. I won my first moto and he went 1-1: we deserved to win and it was a shame we didn’t get the results with our MX2 rider. We were so close but Team France were the best today and we should respect that. I want to thank Red Bull KTM Factory Racing for the whole season; they did an incredible job. I also want to thank the Dutch Federation for being behind us. We had a great weekend and some great days here. I’m happy to finish off the season. Next year it will be at Assen and home soil and if Glenn has the same breakfast and we get another result then we can definitely go for the win. It has been a good day.” 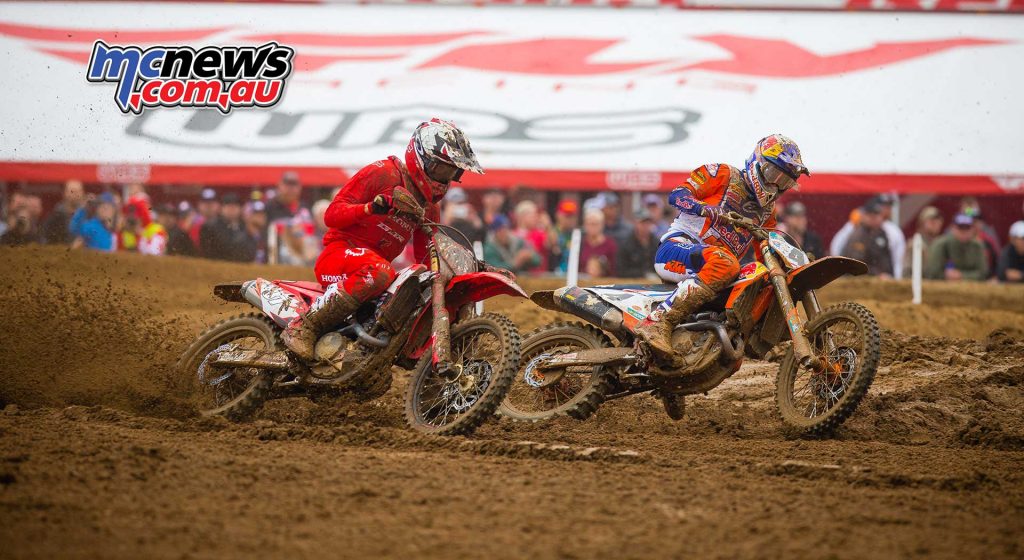 Australia actually led the event until the final moto but slipped to fourth in the final rankings and this year it was again Hunter Lawrence that stood out as Australia’s highest performer with second place in the second moto.

Unfortunately Jorge Prado just bested Lawrence for the Ricky Carmichael Award this time around, a trophy that Lawrence won in 2017.

“I’m really happy with how this whole weekend went. I knew that it would be a track that I’d like and that the conditions would really suit my style and that’s exactly how it turned out. To come second in the second moto, on a Honda CRF250 up against the 450 riders was a really pleasing achievement and it was great it helped Australia achieve a fourth place overall. I thought coming into this event that a top five was possible so to one better was really cool. I really had a great time all weekend and it was awesome to show my speed on the biggest stage of them all.”

Kirk Gibbs and Mitch Evans both had dramas but still carded good enough results to help Australia to fourth outright. Mitch Evans (Open) chalked up great results with 10th and 14th place finishes, despite breaking his rim in one of the bouts. Kirk Gibbs suffered some bad luck in the MXGP class  but still registered 14th and 33rd.

The first team to line up for Race 1 was Saturday’s top qualifier, the Netherlands. MXGP rider Jeffrey Herlings took full advantage of the start by scoring the Fox Holeshot after the better jump off the gate from Italy’s Antonio Cairoli was thrown away when he slid out in the first turn.

Team Spain’s MX2 rider Jorge Prado was right behind Herlings in second but took over the lead before the first lap was complete when the Dutchman slid out. France’s Gautier Paulin took over second ahead of Canada’s Colton Facciotti.

Herlings got back up and on track in 5th behind Australia’s Hunter Lawrence while the American’s of Eli Tomac and Aaron Plessinger ran in 10th and 9th.

Herlings was quick to make passes through and at the start of the first official lap was up to 3rd as Lawrence also moved up to 4th. Paulin’s French Teammate Dylan Ferrandis was riding well in 6th but lost the spot to Great Britain’s Tommy Searle at the end of the second lap.

America’s Tomac was moving forward from 10th and by lap 3 he was up to 6th but his teammate Plessinger was dropping as far back as 21st.

Meanwhile 2018 MX2 World Champion Prado led but Herlings came up quickly one past Paulin for second. On lap 8 Herlings took the lead from Prado but his Dutch teammate Vlaanderen was out of the race.

By the finish Tomac worked his way up to 4th just behind MX2 rider Prado while Cairoli came from his first turn crash to 6th but Plessinger only recovered to 18th place.

Herlings took the race win by 25 seconds over Paulin, 31 second ahead of Prado and 40 seconds ahead of Tomac. The results of the two riders in race 1 put France in the lead of the nations standings with a combined 9 points, 7 better than Italy in second and 9 better then Belgium in third.

The second race was the combined riders of MX2 and Open which saw the Netherlands going to line first again with Glenn Coldenhoff but this time no Clavin Vlaanderen after his injury from race 1 made it impossible to continue.

Down a rider Coldenhoff made the most of the situation for the Dutch team taking the Fox Holeshot and leading the again impressive MX2 rider Jorge Prado. Team Great Britain’s Ben Watson was up in third and leading Team Switzerland’s Jeremy Seewer while the American’s again struggled.

Justin Barcia was in 16th and Plessinger was in 18th on the first lap Barcia worked his way up to 9th by lap 9 as Coldenhoff still led Prado and Watson. Plessinger on the other hand only gained two positions throughout the entire race to finish 16th.

The Aussie MX2 rider Hunter Lawrence was pressuring Seewer as early as lap 2 but finally found his way past the Swiss rider on lap 7. 6 laps later Lawrence passed Watson for 3rd before finally moving into second ahead of Prado on the next to last lap.

Coldenhoff took the race win for the Netherlands ahead of Lawrence, Prado, Watson, and Seewer. Team France’s Ferrandis and Tixier scored 8th and 32nd as Tixier’s bike expire while Barcia made no further moves to take 9th. The 2-3 scores of Prado crowned him the MX2 overall winner while Team Australia took the lead in the nations standings ahead of Belgium and Italy.

The final race of the day was the one that decided the 2018 winner with the combined classes of MXGP and Open racing one last time.

On the start it was Italy’s Alessandro Lupino taking the Fox Holeshot ahead of Germany’s Ken Roczen and the Netherlands Glenn Coldenhoff.

Coldenhoff took second away from the German on the exit of the second corner before taking the lead from Lupino only a few corners later.

Paulin moved into third as Herlings came from a poor start to pass both Roczen and Paulin in one lap.

Coming forward with Herlings was Antonio Cairoli but the Italian got held up by Paulin as Herling took 2nd from Lupino. After looking for a way by Paulin for 3 laps Cairoli moved to 4th but then both he and Paulin were passed by Germany’s Max Nagl.

Nagl fell afterwards to 7th however but Cairoli was only 4th for a lap as Paulin took the spot back then went on to pass Lupino. 2 laps before the finish Lupino and Cairoli swapped positions as Coldenhoff went 1-1 with Herlings in second and Paulin 3rd.

The strong races and class overall wins from both Coldenhoff and Herlings however were not enough to make up for the absence of Vlaanderen and the consistency of team France who took their 5th successive Monster Energy FIM Motocross of Nations win, the 6th in their country’s history.

“This definitely feels good and going 1-1 at the Motocross of Nations is kinda crazy. I have no words. I think this is a great and beautiful track and the conditions were great. It is just a shame for Calvin; he could have finished in the top fifteen easily in the first moto but there were some issues and then he couldn’t start the second one. It has still been a great day to be up here [on the podium] and congratulations to the other teams. We were the strongest today. I loved being out here.”