Brandon Demmery and Kyle Buckley repeated their dominance over the field in the second Ninja 300 Cup bout. This time things were even closer with Demmery getting the nod at the stripe by a slender 0.037 of a second. The duos dominance underlined when the final podium place went to Bailee Perriton more than ten seconds behind after the eight-lap race distance.

Glenn Scott again got the jump off the line ahead of Trounson, Metcher and Lovett. This time around Lovett was not about to let them get away and jumped past Trounson to take second place late on the opening lap to declare his challenge.

Scott maintained his lead over Lovett until the flag, taking the win by 1.933 seconds over Lovett. Metcher got the better of Trounson for third.

After the red flag came out due to an incident with a fallen rider the second Supersport race was run under full re-start conditions.

Aaron Morris and Callum Spriggs quickly got down to business and along for the ride this time around came Aiden Wagner.  Morris again looked set to have the measure of everyone though and looked likely to cruise to victory. That was until a huge moment with three laps to run as he was forced on to the dirt when trying to pass a back marker, this allowed Wagner to close right on to his tailpipe, and Spriggs to regain some ground.

On the penultimate lap Lockart crashed at the top of the circuit and Matt Davies was also caught up in the incident which promoted Daniel Falzon to a clear fourth place and Aaron Gobert into fifth.

Morris went on to take a 0.174 of a second victory over Wagner while Spriggs consolidated his second position from this morning with another rostrum finish ahead of Daniel Falzon. 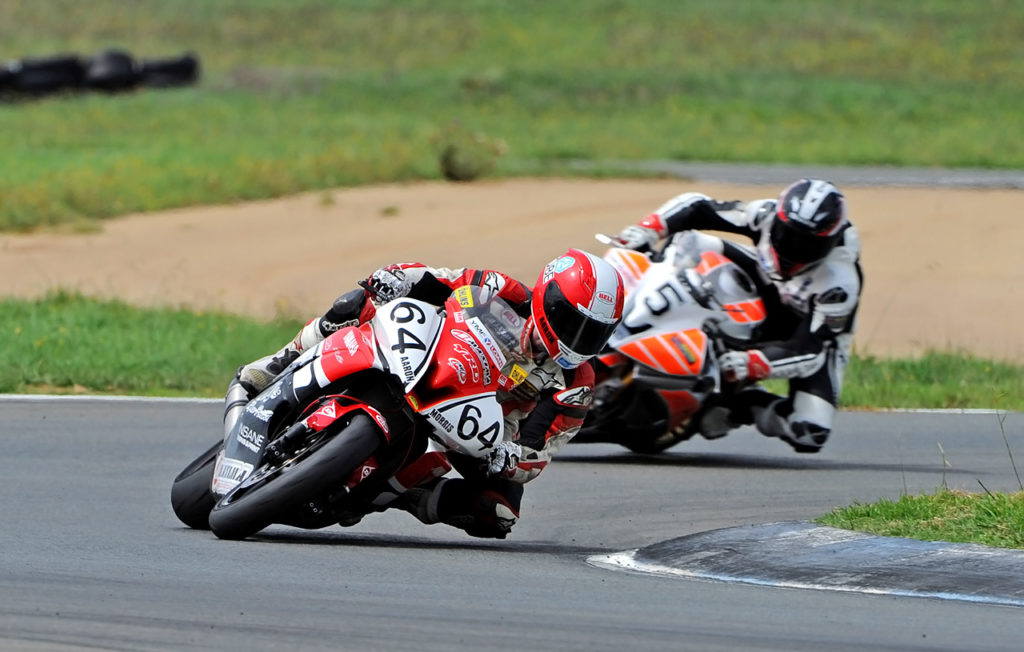 Glenn Scott again got the holeshot from pole and led the field through turn one as Glenn Allerton and Sean Condon gave chase.

Glenn Allerton made a huge move up the inside into the double left but went in a little too hot and ran wide enough for Condon to slip past and relegate the BMW man to third place. Wayne Maxwell and Jamie Stauffer were also right in the mix with Maxwell really starting to charge on lap three and tried to get Allerton for third place but had to pull out at the last moment.

Allerton took Condon for second place as they started lap four, these shenanigans had given Glenn Scott some minor breathing space.  Not for long however on the next lap Allerton put in a scorching 58.840 new lap record to close on Scott, and Condon was coming along for the ride! The Kawasaki man also dipped into the 58s on the following lap to declare his challenge was far from over

Allerton tried to get Scott in the double-left with six laps to run but that again opened the door for Condon who took the invitation with glee and pushed the BMW back to third place once again. Allerton was having none of it though and was back up to second place two corners later. Condon had a go at Allerton again at the same point on the next lap but this time Allerton held him out.  Allerton made a dive into the final complex however and ran a little wide which again allowed Condon to slip through.

With four laps to run the leaders started to thread their way through backmarkers. Scott ran on to the dirt a little on the back straight with three laps to run but it didn’t seem to cause him any problems.

Glenn Scott went a little wide in the final turn but held Allerton out to take the win. Condon a very strong and close third, Maxwell fourth, Stauffer fifth. 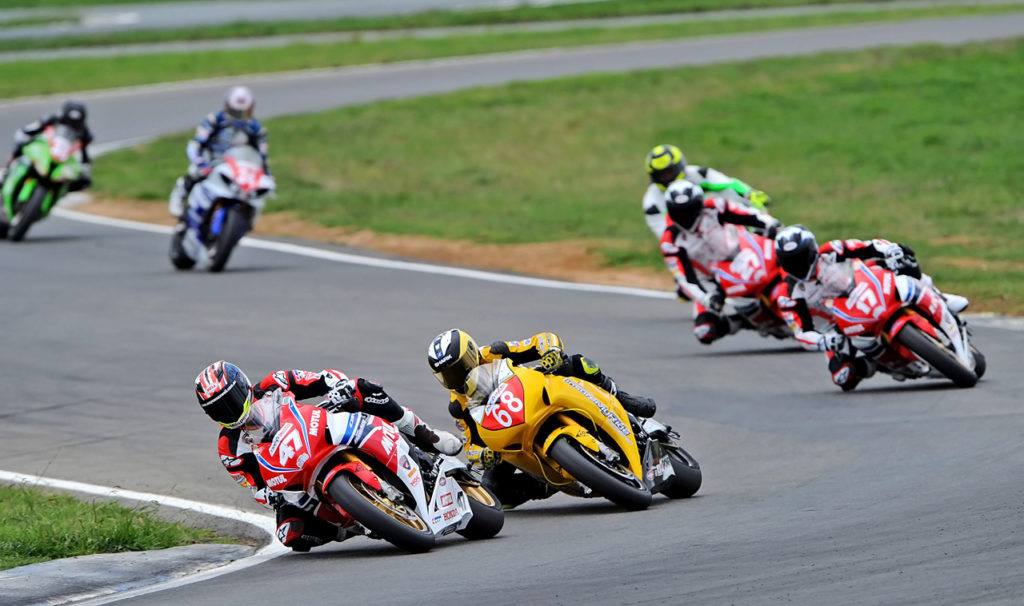 Craig McMartin and Angus Reekie again quickly broke away from the rest of the field. Simon Galloway was the only ride within cooee of them after four laps but then was notified of a 15-second jump-start penalty pushing him back even further.

McMartin looked to have it sewn up but a late charge from Reekie nearly saw the KTM get the gong but McMartin held on for the win.