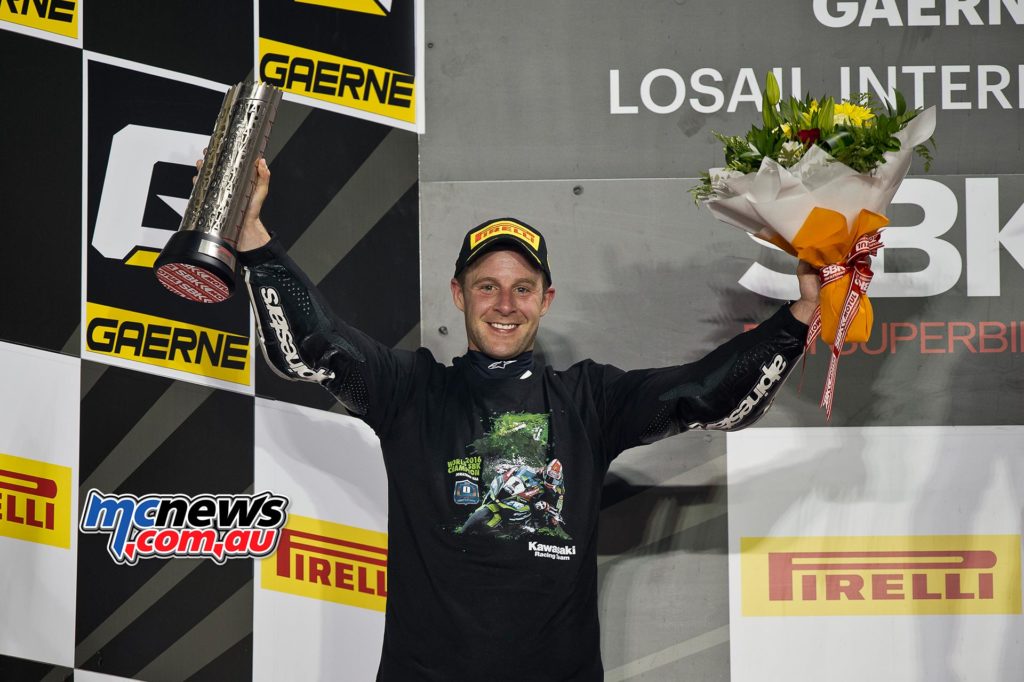 Jonathan Rea (Kawasaki Racing Team) secured his second FIM Superbike World Championship in succession thanks to a second place finish in the opening race at Losail in Qatar. The last time this feat was achieved was 17 years ago. Tom Sykes (KRT) finished fourth in the race to remain second in the championship standings, with one race remaining tomorrow.

Rea, who had won his eighth career Superpole contest earlier in the day to start from the best grid spot, was intent on winning the 17-lap race to secure the title as he enjoyed a large points cushion of 48 over Sykes at the start of the day. 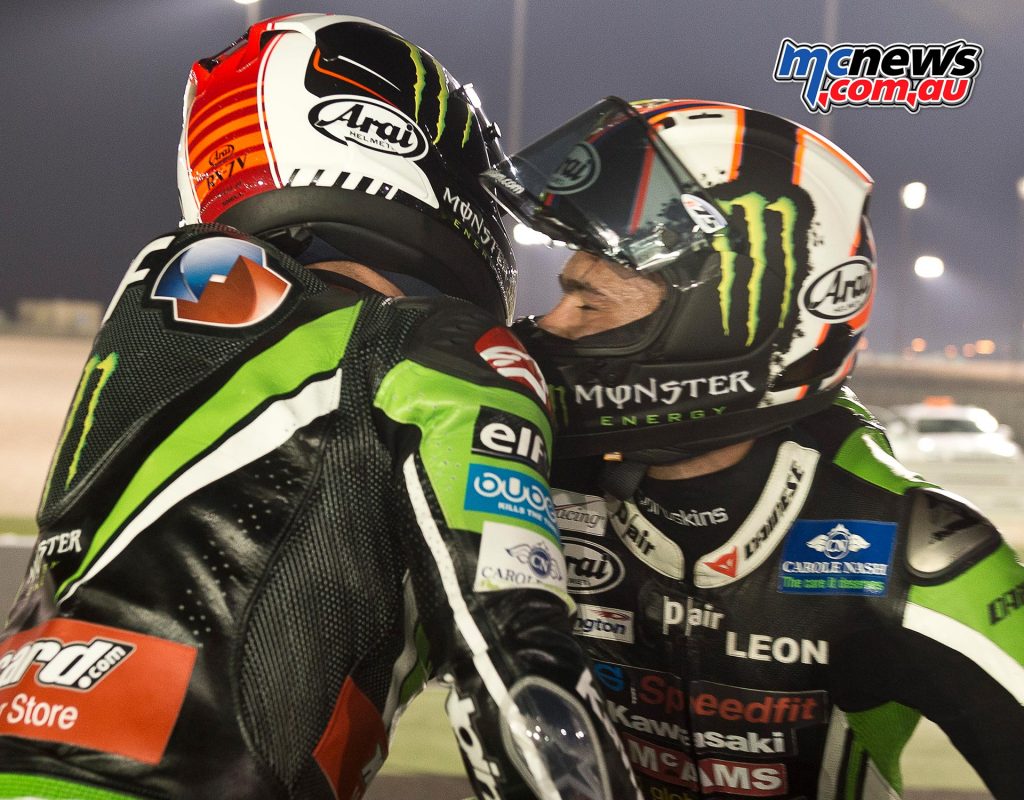 Tom was the only rider who could possibly catch Jonathan on this final weekend of the 13 round season, but the title was decided one race before the end after Rea’s podium ride. 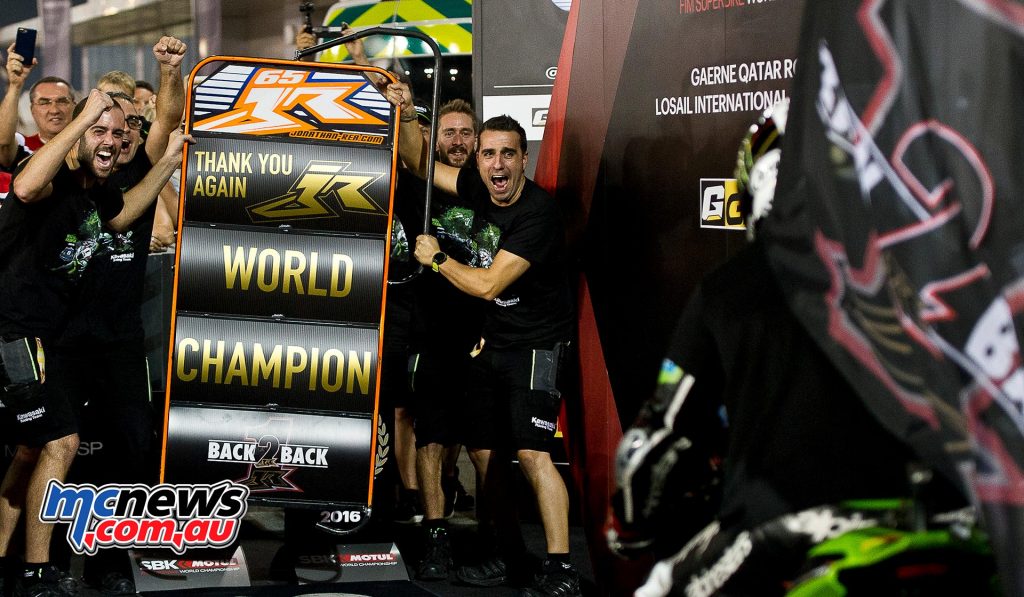 Rea is one of only four riders to have won WorldSBK titles from one year to the next, joining Carl Fogarty (twice), Doug Polen and Fred Merkel in that exclusive club. 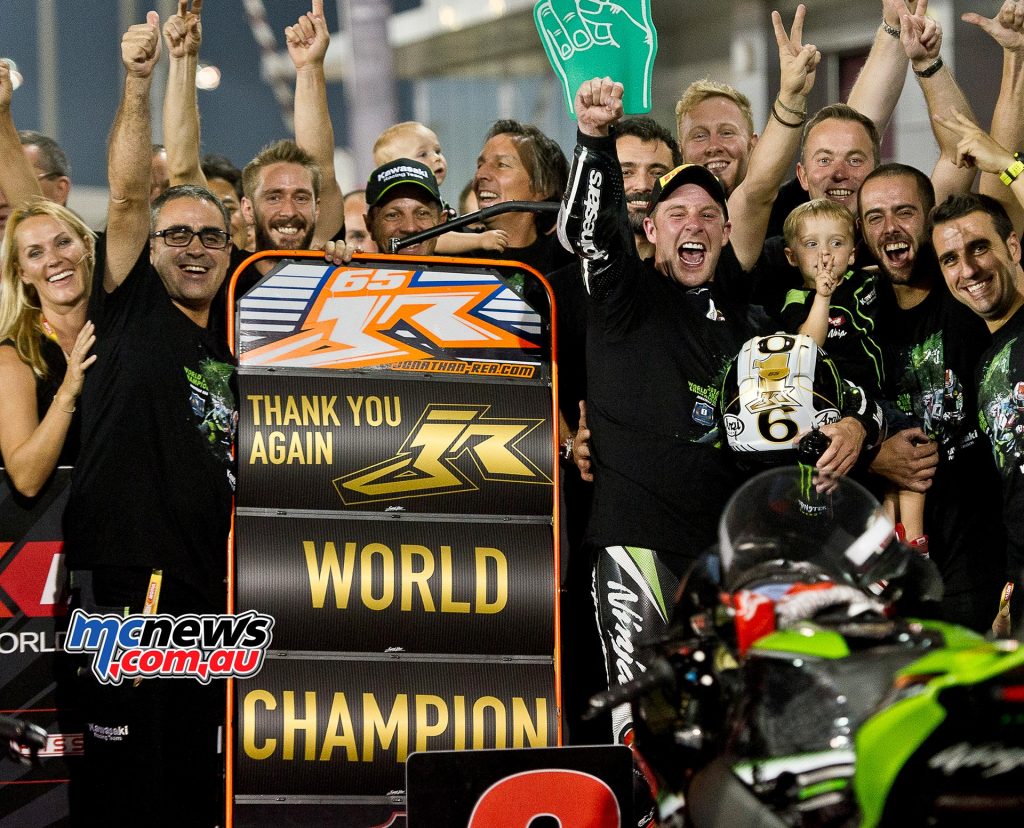 In race one at the 5.380km Losail circuit Rea had chased eventual race winner Chaz Davies in the early laps and held station behind him for some time. Jonathan eventually eased off to earn more than enough points to make his second championship secure. 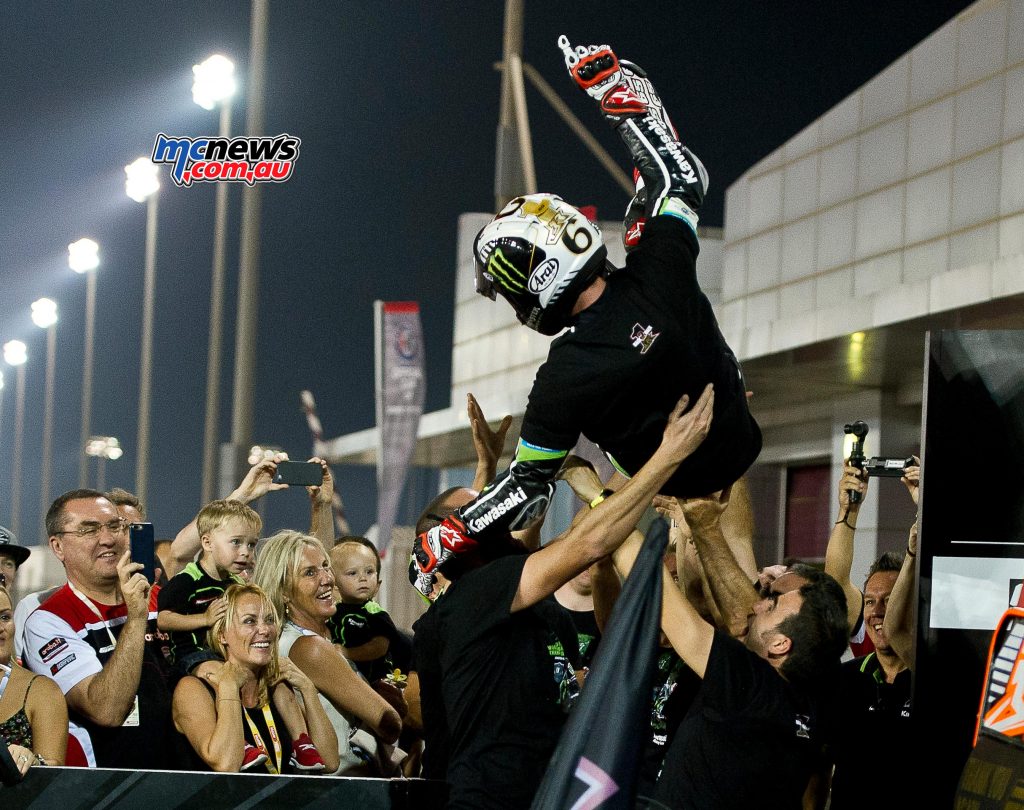 “It is incredible to have won back-to-back championships. It is very raw right now because I have not had time to take it in, but to have such a year like I had last year – and then this year with the new bike – I think we faced a lot more challenges this time. I am really happy and proud of our work because this bike was so new. To win in the first year of a new model is incredible and I want to thank Kawasaki for building such a good base bike. I expect to go from strength to strength. It felt like we really had to win the championship this time so I have to thank everybody all around me in the team. I want to thank each and every one of them.” 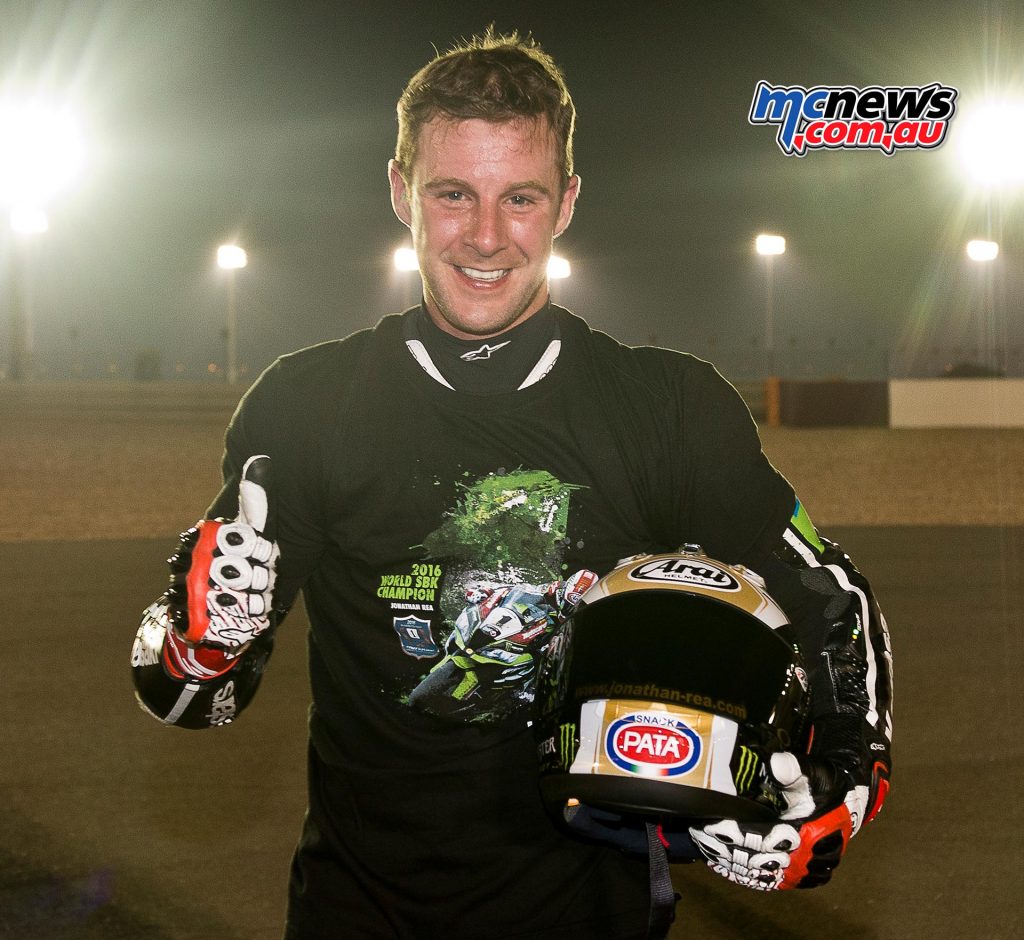 With one race left to run there are still many possibilities for each KRT rider but Sykes will now concentrate his efforts defending his second place in the points ranking, as he is now seven points ahead of Davies.

Jonathan currently has 482 points and Sykes 427, ahead of the final race of the year.

“Congratulations to Johnny because two on the bounce is great. He is riding very well and it is credit to the team and Kawasaki Racing. We have come from way back in 2011 and they have been so consistent in the last few years, fighting for world titles. This year I am not the rider to take the title on the Ninja but at least the trophy is staying inside Kawasaki. It was a really strange race today because I could not get the pace in the beginning but towards the end I felt we improved it. It seems to me like I was also catching Sylvain at the end but the race was too short to make a good ending.” 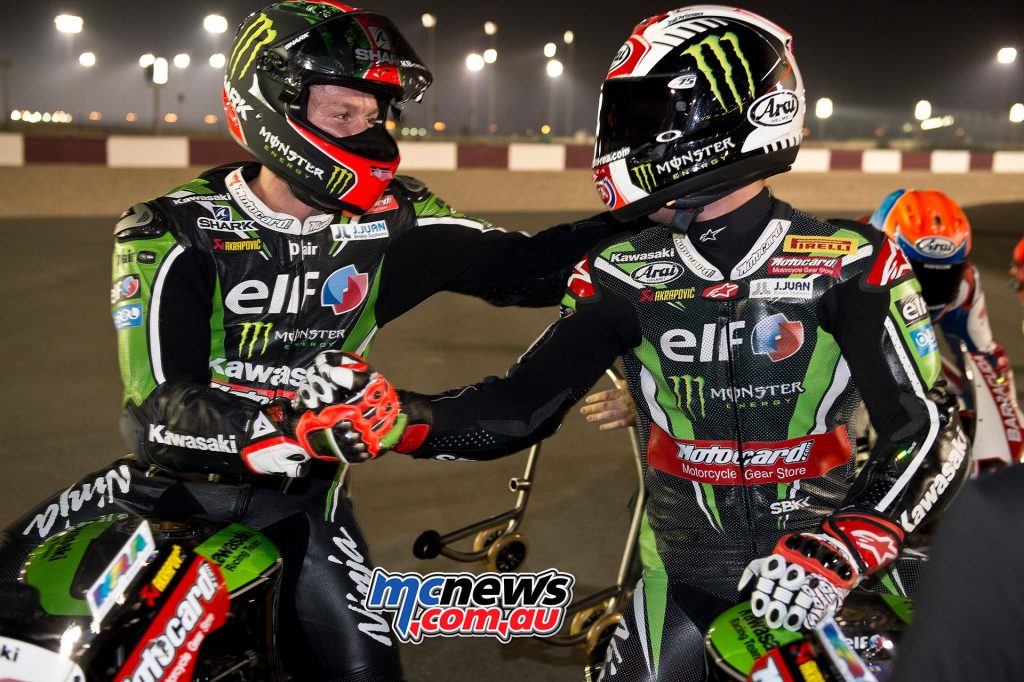 “I would like to pass my biggest congratulations to Johnny for his consecutive title wins. A championship win is something very difficult to achieve, and even more so for two in a row. It has been a very complicated year, much more than people can see from outside, so for me his job has been of great value. I hope he enjoys the moment with all his friends and family, because for sure all in KRT will enjoy it for some days. All the staff from KRT and Kawasaki always try their best to give our riders the right tools to make their dreams come true. We all are very happy for Rea make his dream come true while riding the green power machine.” 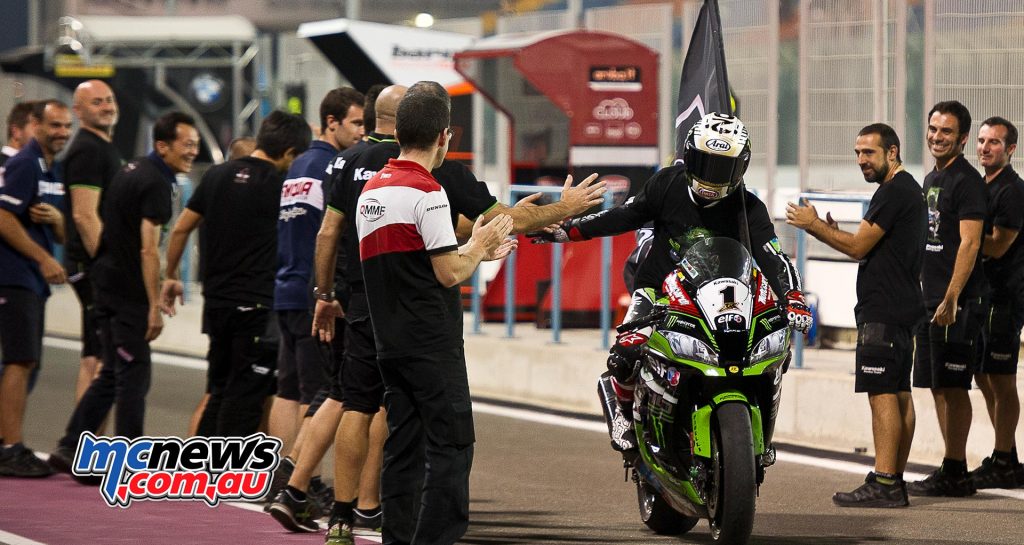 “We all know that winning any championship is so difficult. Johnny made that look almost easy last year on our fully proven KRT race bike. We understood that defending that number 1 plate at this level of racing was going to be an even tougher challenge in 2016. Our all-new Ninja ZX-10R proved to be an excellent base. With intelligent development on and around the WorldSBK circuits this season all of the team and JR have made an incredible job again in retaining that Championship title for Kawasaki.”

“Congratulations to Jonathan, it is a great accomplishment to win the World Superbike title in two consecutive years. I am sure that all Kawasaki fans across the world will join KHI in congratulating Jonathan on his achievement and also thanking Tom Sykes for a year of excellent performances. This back-to-back championship highlights once more the excellence of Ninja ZX-10R as a supreme road bike and an unbeatable racing package.”