Since its inception back in 2004, the Kawasaki KX250F has built up an impressive CV of race and championships wins both here and overseas, especially in the USA with the all-conquering Pro Circuit race team. In Australia, Luke George was the last one to rack up a national title when he won the pro-lites back in 2008. A host of big changes for the 2011 model will no doubt have Kawasaki looking at adding some more silverware to their trophy cabinet.

Kawasaki Australia recently held the press launch of the new model at Louee just south of Mudgee NSW and MCNEWS.com.au were able to put the new machine through a host of different and varied track conditions. Heavy rainfall in the 4 days leading up to the launch made track conditions quite interesting for the first half of the day.

I was really looking forward to testing the new fork on track as the theory behind it makes sense. It claims 25% less stiction (this is always the enemy with suspension) as well as lighter weight and more adjustment. One thing as an ex road racer that I have always thought would be good on dirt bikes is external spring preload adjustment, and with this new SFF fork you get 60 clicks of preload adjustment at your fingertips. This changes the fork action along with the height at which the bike sits in the middle of the corner and I must admit I was suitably impressed. I tested a host of different settings with the preload to get my head around what changed with each modification and I think that this extra adjustment will help both novice and expert riders alike to find a balance that they are comfortable with. There is also the normal compression and rebound adjustment, although this is quicker as you only have the adjustment on one fork leg, not two!

Kawasaki has not only changed to a radical new fork system, they have also modified the chassis with increased flex and a reduced fork offset to help the bike’s tuning capabilities. In the rear suspension department it also benefits with a new shock absorber with a longer stroke, updated damping settings with dual compression and rebound adjustment. I did not play with the rear shock settings that much as it was driving well off the turns, felt good on the small acceleration bumps and the race sag was set within the range for my weight, so I was more focused on the front.

Ergonomically most of the 250s on the market feel thin and easy to manoeuvre on and the 2011 KXF250 is no different.

Brakes work well and offer good feel although the KTM’s Brembos are still the benchmark in the brake department.

Kawasaki has spent some time on the styling with anodised blue fork and shock adjusters turning standard-looking suspension into factory! Another nice addition is the wider foot pegs. Unfortunately we are still left with the old style cross bar Renthals as standard – not a nice taper bar that comes standard on some of the competitions models, but they feel and do the job just fine. I am just getting picky.

If the changes to the chassis and suspension weren’t enough to grab your attention, let’s look at the engine department. If there was one thing that the previous models of the KXF250 lacked it would have been EFI. And in 2011 Kawasaki has added the missing piece to complete the puzzle.

Kawasaki has always had a reputation in the lites’ class for building strong powerful engines with great over rev performance and the fuel injection doesn’t detract from this at all. It just makes it nicer! The 2011 KX250F employs the same battery-less fuel injection system that was used in the KX450F this year, the main difference being slightly larger holes in the injector for better performance at high RPM.

On the track the new injection system shows it strengths. It has a great spread of power, strong in mid range allowing me to run a gear higher than I expected I should but still with the good over-rev characteristics of the old engine. My only negative was the off-to-on throttle transition felt a little on the snatchy side. This was improved when I decreased the idle speed but was not as nice as the KTM or Suzuki in this area.

As well as the injection the KX250F has also benefited from a new shorter skirt piston with additional reinforced ribs, a 30mm longer exhaust, revised gear ratios and final drive. Like most of the injected motocrossers of late the 2011 KX250F is a dream to start. I was just cracking throttle as I kicked and the engine fired into life first kick nearly every time I started. This didn’t change from the cold to hot starts which is another added bonus, as there can be a lot of time lost and energy expanded kicking life back into some bikes!

In addition to our time aboard the new KX250F, MCNEWS.com.au was fortunate to get some one-on-one time with Kawasaki’s national service and operations manager Peter Spindlow. We were able to speak to him about the major changes to the new model and you can listen to that interview by that also includes an onboard lap at the Louee circuit aboard the new machine. Peter was kind enough to talk us through the thought process and technical information in regards to the all new SFF Showa fork.

Also available from Kawasaki Australia as an optional after part is the KX Fi Calibration Kit. This comes with ECU Controller, software, mounting brackets and USB cable. It comes with seven different pre set maps, the ability to log six hours of data as well as infinite adjustments to customize a power delivery to suit all types of situations and rider preferences.

Overall I think the new 2011 KX250F is a great motorcycle. It will work well for enthusiasts right through to pros. I think Kawasaki has done a brave and exciting thing by releasing their new model with the Showa SFF Suspension. It has the most adjustability that I have seen on a production motocrosser and I think that they are on a winner. The 2011 KX250F is available at Kawasaki dealers now and retails for a competitive $10,999. 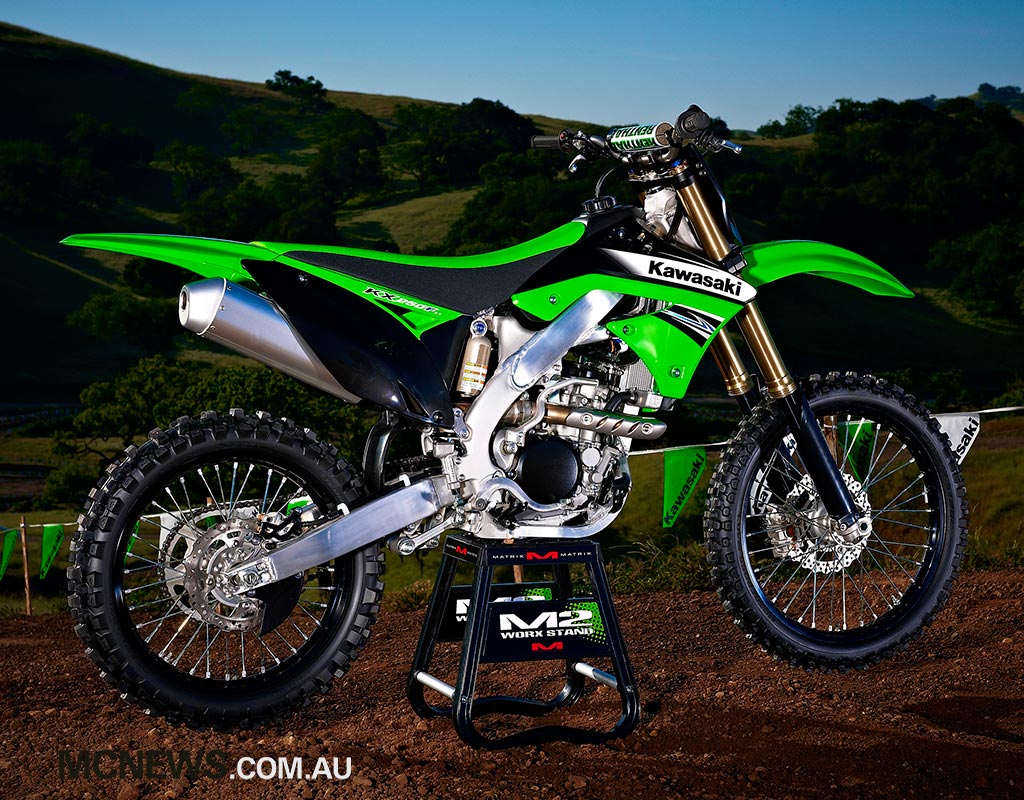 Kawasaki Z H2 Review | Naked and blown on the road…

Title contenders battle to the flag at Misano

Gardner and Fernandez reflect on first taste of a MotoGP bike