Leon Haslam with Honda for WorldSBK 2020

Leon Haslam will have a whole new challenge in 2020 as he joins the much-anticipated factory Honda team, supported by HRC.

The British rider has an illustrious and distinguished career with the Japanese manufacturer and will return to the official line-up for next season, alongside Spanish sensation and 2019 Championship runner-up, Alvaro Bautista.

“For me to get the opportunity to be back with Honda and, most importantly, as an official rider with HRC back in the championship with a factory team, is like a dream come true” said Leon Haslam. “It’s so exciting to be involved in the project and already I’m thinking about when I can ride the bike and get to Phillip Island, one of my favourite tracks, for the first race.”

“I can’t wait to ride the CBR1000RR-R. A new bike means that we’re looking at a big challenge of course, but the project is extremely professional, and we all know what Honda and HRC are capable of. What they have achieved in the racing world speaks for itself. It’s really a fantastic opportunity for me, and I’m ready to give it my all, for the team, the company and all our fans around the world”.

Starting back in 2003, Haslam has been one of the most prominent features in the World Superbike paddock. A permanent switch to WorldSBK came in 2004, where he took a first career podium at Oschersleben, finishing eighth in the Championship.

Haslam took three seasons out before taking a third place at Portimao in the final race of 2008 for HM Plant Honda; enough to convince the Stiggy Racing Team to sign him up for 2009. Four podiums helped him to finish sixth overall.

2010 would be Haslam’s greatest season and he switched from Honda to Suzuki, storming to victory in the season-opening Phillip Island race by just 0.004s to make the closest finish of a WorldSBK race in history.

He led the Championship and took two more wins before finishing as Championship runner-up, with only four-time 250cc World Champion Max Biaggi ahead of him. 2011 and 2012 saw him with BMW and he took regular podiums before moving to Honda for 2013.

2013 would be a season blighted by injury, but Haslam had strong rides nonetheless, building on these for 2014, taking a podium in France and finishing seventh overall.

2015 saw him with Aprilia and two more wins came by on his way to fourth overall. Six more starts for Kawasaki over the next two seasons as wildcard would keep Haslam in the paddock, before coming back full-time this year, taking six podiums. 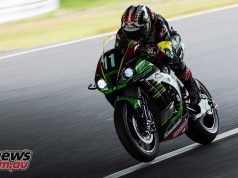 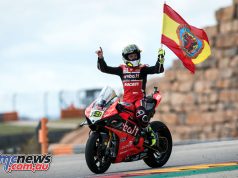 Bautista makes history at Aragon | Nine in a row!