MotoGP riders woke up to a brighter morning for the second day of their three-day test schedule at Indonesia’s new Mandalika circuit.

Alex Rins, Marco Bezzecchi and Raul Fernandez were the first riders to head out on track and they were straight down to business. More than half the field had put in at least a few laps within 20 minutes of the session getting underway, but the Honda and Aprilia riders seemed to be biding their time a little longer.

The Marquez brothers were the first of the Honda horde to hit the track, around 35-minutes into the session. Ten minutes later the first of the Aprilia riders headed out.  Of course with their ongoing testing and engine development concessions, this track time not quite as crucial for Aprilia as it is to their competitors.

By the end of the first hour the whole 24-rider contingent had been out on track. The busiest riders at that point had been Alex Rins and Jack Miller, both of whom had already put in 17 laps of the 4.31 km circuit.

Aleix Espargaro and Fabio Quartararo joined Rins in the 1m31s club before Brad Binder then went El Presidente with P1 thanks to a 1m31.814. Enea Bastianini also dropped in a 1m31 a little later on.

As the pace started hotting up a few riders also started to push the envelope a little too far with both Andrea Dovizioso, Jorge Martin and Joan Mir tasting the Indonesian dirt.   Tracks conditions were still not up to a race standard, the good line was still quite narrow, not much more than a metre or so in some parts, stray more than a few inches off it and you would be lucky to remain upright.

As the middle of the session approached the on track action calmed down a lot with few riders out on the circuit at any one time. Shortly after their lunch break dark clouds started to form on the horizon but the rain stayed away.

It was not until just over half an hour was left in today’s proceedings before a Honda dipped into the 1m31s, it was a Marquez, but not the one most would have expected, Alex the pacesetter at that juncture for Honda and the sixth ranked man overall. For all of a couple of minutes he was anyway… His LCR Honda team-mate Takaaki Nakagami then went marginally quicker to push Alex down to seventh. 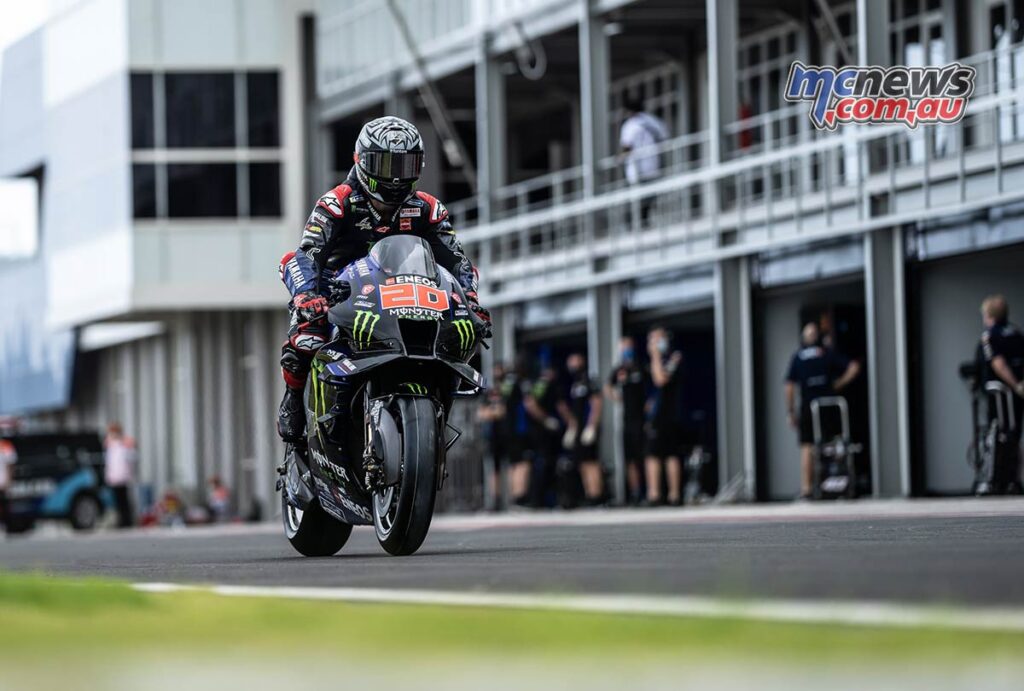 Fabio Quartararo then got wound up to move up from P2 and displace Binder at the top of the charts, 1m31.564 to the World Champ. The 22-year-old then immediately backed that up with a 1m31.739 to further underline his pace.

There was now 20 minutes left and red sectors were lighting up the timing screens all over the place, there were now 13 riders in the 1m31s. Marini leading Quartararo, Zarco, Martin, Pol Espargaro and Brad Binder.

Maverick Vinales then went P3 with just under ten-minutes remaining.

The top order didn’t really change really late in the session, only Enea Bastianini making a big leap forward in the dying minutes. A 1m31.599 to propel him up to P7. And that was all she wrote!

Luca Marini topping day two for the new VR46 Mooney Racing Team on the Ducati ahead of Marc Marquez on the Honda, Maverick Vinales for Aprilia, Fabio Quartararo for Yamaha and Joan Mir for Suzuki made it five different manufacturers in the top five at the end of day two.

The top ten covered by less than half-a-second, and top 18 within a second.