by Trev
in MotoGP, Motorcycle News, Motorcycle Racing, Yamaha News
A A
Share on FacebookShare on TwitterShare

How has everything being going from your point of view with testing?

Wilco. “Yeah I think, after Sepang we were really looking forward to try the bike here especially because we were lacking some performance in Sepang but finally Jorge is again feeling much better with the initial grip that the bike has and I think there is the potential is to win for this season.”

A lot of focus has bee on tyres in the last couple of weeks but what about the progress of the Yamaha with the gearbox and the upgraded electronics you have to have this year?

Massimo: “As you know they are always working to improve the bike but unfortunately this year in sepang fitting the new tyre to the bike cost us some time to develop our bike. We suffer a lot the tyre and also the circumstance that the Speang circuit was providing bevaues the lack of grip of the tar,ac and the temperature make everything worse so we had to spend time to let the tyre work and this cost us tuime to work on our bike; to develop our bike. Anyway, so far we could already achieve the fuel consumption, the data we got is good we were we had doubt at the beginning but so ffar the results we had there give us a lot of conficence. We knew that what we saw there was because we were there, these three days in Phillip Island wwe have the confirmation that it was the lack of grip was the casue of why we suffe there.”

Is there any doubt of getting to the race with the new fuel consumption? Do the electronics become stronger at the end of the race?

“Depends where we are but anyway you know the bike the map is lean give some more difficulties to the rider. Even if less power, but also the power delivery is different and sometimes more aggressive.”

Any chance of detonation with it leaning off

“Not at the moment. Philip Island is one of the easiest tracks to finish the race with 20 litres. The corners here are very long and they are touching 10 15 of throttle for a long time.

Now onto the bigger picture of the open class, what is your feeling with Yamaha now that Ducati have made the decision so late near the season start?

“This is a very good question but also a difficult one and a political one to answer. Of course, the manufacturers are not very pleased with that move but not saying they are wrong but finally they get a lot of freedom but initial open class intention was for privateer teams and not the factory teams but we know that Ducati struggled quite a bit to compete, so we understand the jump and instead of five engines they get 12 engines and they can develop a bit more  but the benefits are huge, of course.”

It might be considered unfoar but at the same time it keeps them in the game?

Massimo: “Yes. They had two three years delay and for me this has been the most clever decision for them. During this season they could, they will for sure be helpful, not helpful but advantage by this decision as we are concerned that they can have 12 engines and they can work on that. Probably that was one of their programs. Also we are curious to see how the open class will be competitive aas what we have seen so far I saw ok good performance for a couple of laps but the rest is still a question mark.”

The rules are for 2017 and Yamaha is not the richest company would you consider going to the open class earlier considering what Ducati has done?

Wilco. “No this has not been discussed yet. The intention for the open class was to help the privateer teams to get close to the factory bikes. The five engine rules for the factories and all the limitations we have on fuel is because we want to stop development on the factory bikes to save money, to save budget and get everything a bit loser and tighter, but this way it looks the opposite of the world, like you jump back suddenly to 12 engines of course you need to invest much more but then again racing is only good to look if there is competition and of course this will make the competition bigger.”

And the software they are using in Open class is supposed to go across the board?

Massimo: “Could be benefit for the people that stay at home to watch the race but anyway the factory are using the development and the knowledge that they learn in this class to develop their streetbikes and having a software close, it only help them to bring the technology from MotoGP to the streetbike.

“For me, in this moment, one of the reasons that the two manufacturers were against one is the reason is there. They want to have the freedom to develop their electronics because of that.”

How much better is the Yamaha for 2014 than last year?

You were going to say that anyway – much laughter.

Wilco: “We improve some areas for sure but it all depends of course on what tyre they bring to the next race; this is very obvious but also how much did Honda improve and how wide is the range to make the bike work but honestly percentage-wise we think we have made a much better bike!” 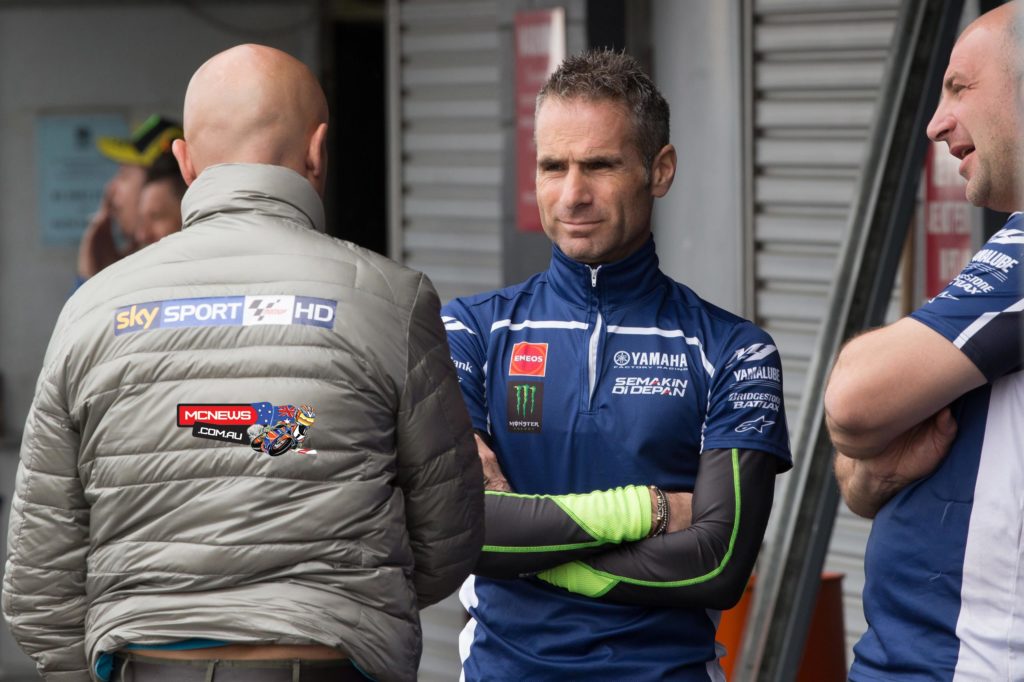