The question still remains, who can challenge Matt Moss?

Mossy is renown for starting any series strong. And that is how SX1 round one of the Australian Supercross Series held at Bathurst played out.

Matt Moss got the start, and his victory grew from there. His consistency and tenaciousness was demonstrated in the first half of the race as he skimmed across the stutters, then he went on to build a decent lead, remained consistent and rode smart for the race win, without even being challenged really.

Adam Monea also broke away from the pack which left the real competition for third place, Jake Moss tussling with Kade Mosig before a strong move by Jake on Mosig allowed Kirk Gibbs to take advantage. Lawson Bopping turned a horrible start in to a great fourth place finish.

American Gavin Faith got the start but went down early on, allowing Brenden Harrison to take advantage and from there the Queenslander pulled away to a 4.1 second victory by the end of the 15 lap main.

Kyle Peters, another American rider, put his head down to chase Harrision but couldn’t bridge the gap to the KTM two-stroke rider but instead was left to battle for the remaining steps on the rostrum with countryman Faith, who bounced back into contention after his early crash and put in the fastest lap of the race on his third time around the Bathurst Showgrounds circuit.

Jackson Richardson rode a solid race to hold off a charging Lewis Woods. Hayden Mellross looked comfortable on the smaller machine while Taylor Potter also looked solid on the bike. It will be interesting to see how the second round tomorrow plays out. 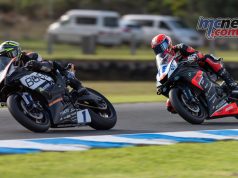 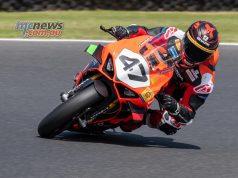 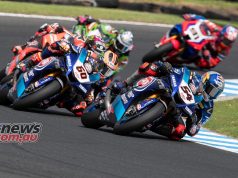