Jorge Lorenzo (Movistar Yamaha MotoGP) decimated his previous Best Lap during qualifying at the Circuit de la Comunitat Valenciana, set last season, as the Yamaha rider blasted straight into the 1:29s before eventually taking six tenths off his 2015 best by the end of the session. Smooth, controlled and ominously fast, only Marc Marquez (Repsol Honda Team) was left with a gasp at knocking his great rival off pole – but the number 93 eventually crossed the line three tenths back. 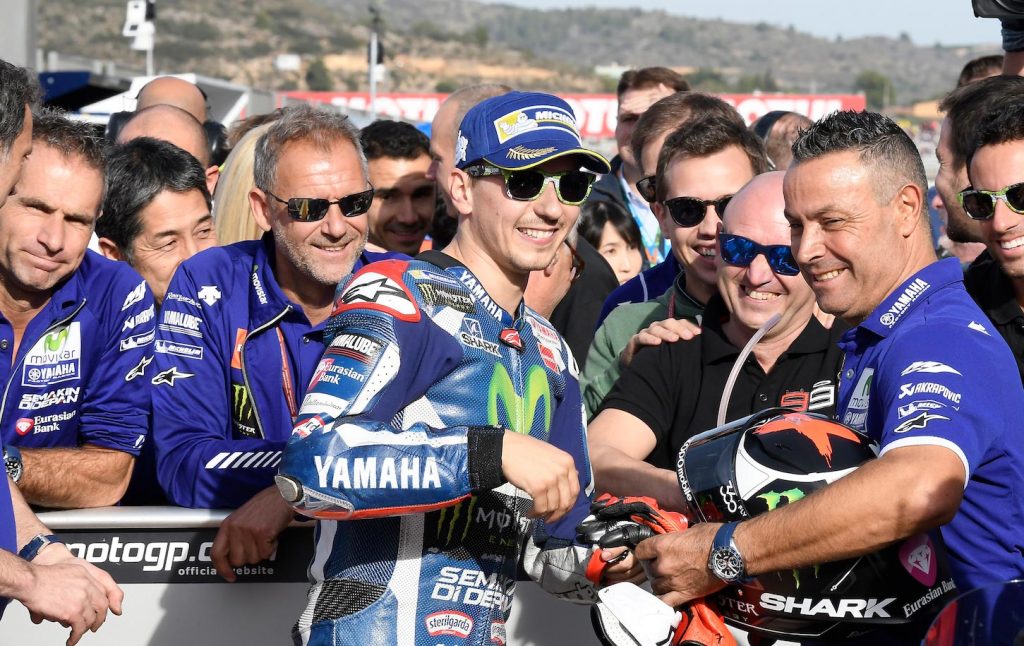 “My motivation was full on, because I wanted to get the best challenge for pole position, but tomorrow is going to be the most important because that decides the victory, which for sure will be very hard to get it. At least I can say that in the last race with Yamaha I got pole position and I think that today I was inspired. This 1’29.8s I already expected and I did it, but not only that, I improved the lap time without a new tyre. I did everything I could and risked in braking. It was a great day and an inspiring moment and I’m very proud and very happy.” 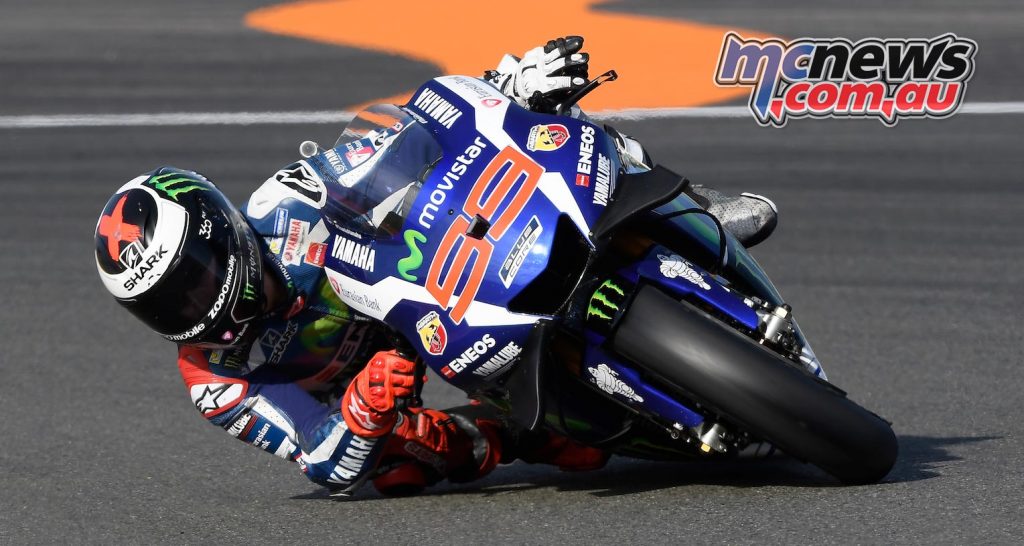 “We’re happy because getting a place on the front row was our main objective, since we knew that it would be very difficult to get pole position today. We pushed our hardest and I had been preparing since the last Free Practice session, in which I had a little crash while I was looking for the limit. Then in qualifying, our original plan was to use just two tyres and to make two or three laps at the end, but in my first exit I found Iannone going quite slow in the middle of the track. I think he just didn’t see me, so though I got a bit angry in that moment as I was approaching quite fast, now everything is okay and there are no problems. Anyway, today Lorenzo was a step ahead of us, especially with the new tyres, and I congratulate him for the time he set. Regarding the tyre choice for the race, we’ll see tomorrow: I feel good enough with the soft rear but we think it may not last the race. This morning we were quite good with the harder option as well, so let’s wait and see. Tomorrow in the warm-up we’ll also try to make another little step with the setup to improve in T4, but anyway, generally speaking I’m happy because we’ve worked well and I think we have a good pace for tomorrow.” 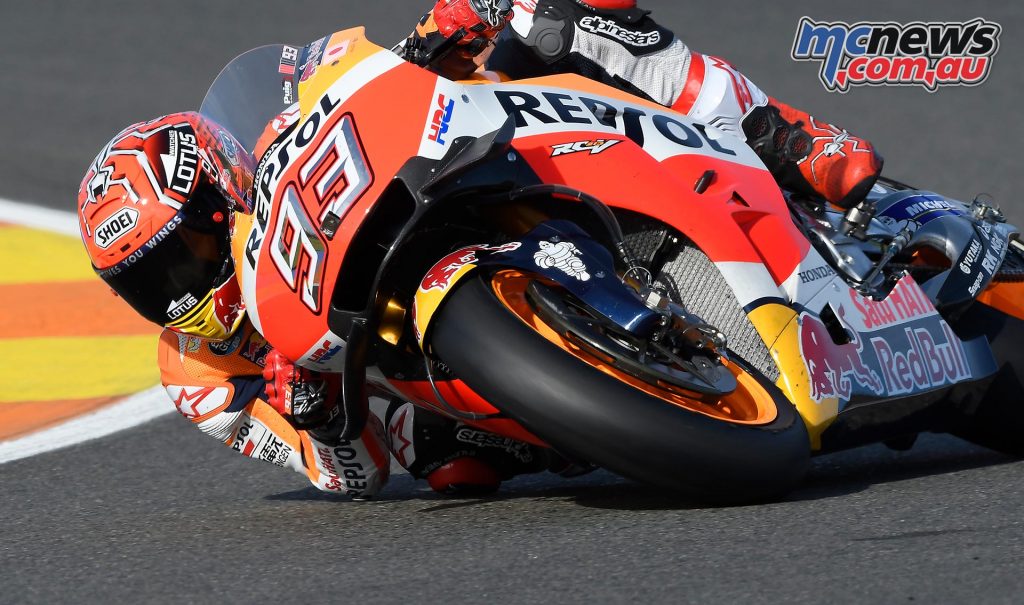 Valentino Rossi (Movistar Yamaha MotoGP) got over some of his Friday afternoon woes in Q2 to complete the front row – but remained seven tenths off the pace of teammate Lorenzo on pole. The ‘Doctor’, celebrated for his Sunday miracles, will be looking to cut the gap as he tries to spoil the hometown Spanish party for the third time in 2016.

“At this track Jorge and Marc are very strong and I’m very happy about this front row because usually I struggle always at Valencia and during the practices, from yesterday to today, we had a lot of problems. We weren’t fast enough but we improved and I think I did a quite good lap, but they are still a bit faster. Depending very much on the pace, I hope to be strong enough to be able to fight for the podium.” 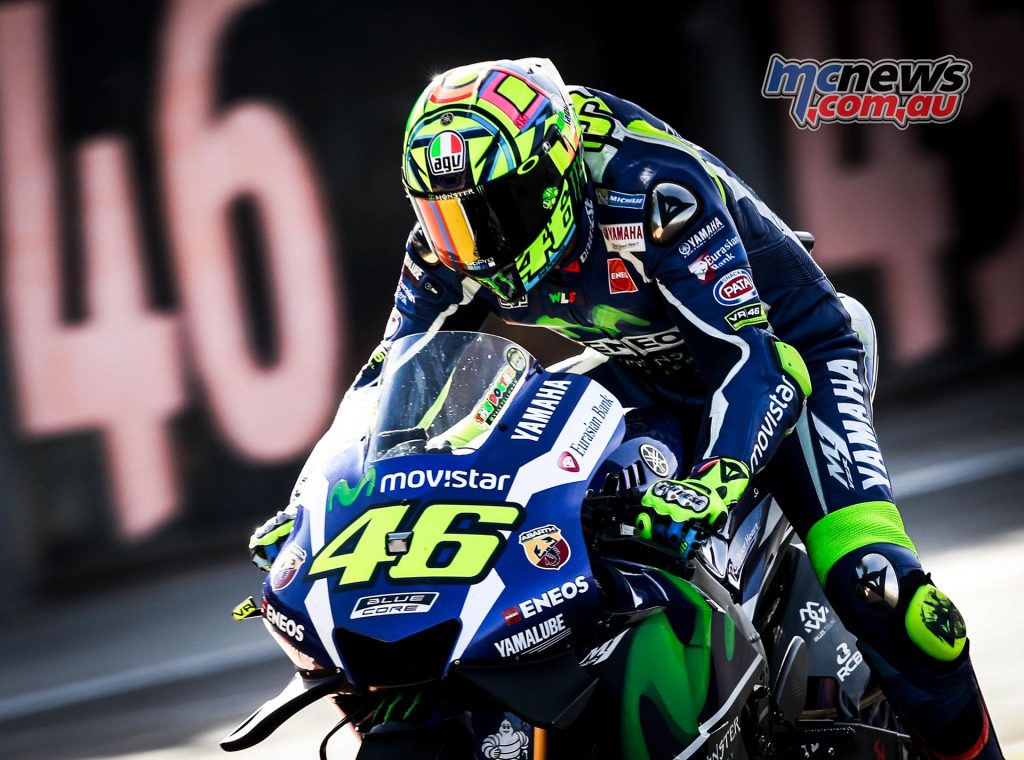 Team Suzuki Ecstar’s Maverick Viñales heads the second row in his final appearance for the Hamamatsu factory, ahead of Sepang winner Andrea Dovizioso (Ducati Team) and Monster Yamaha Tech 3’s Pol Espargaro in his last appearance for the Tech 3 squad. 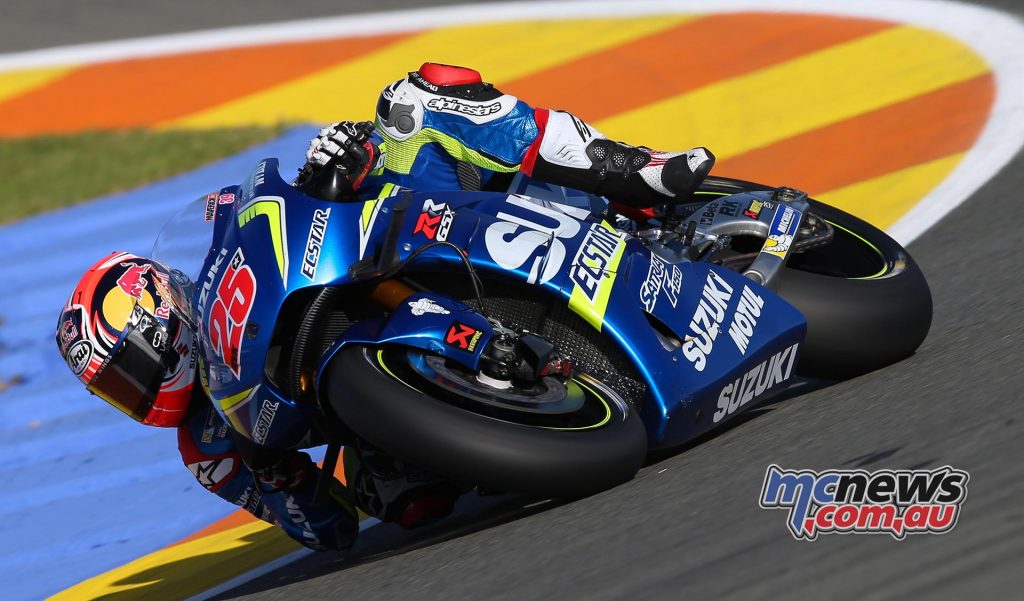 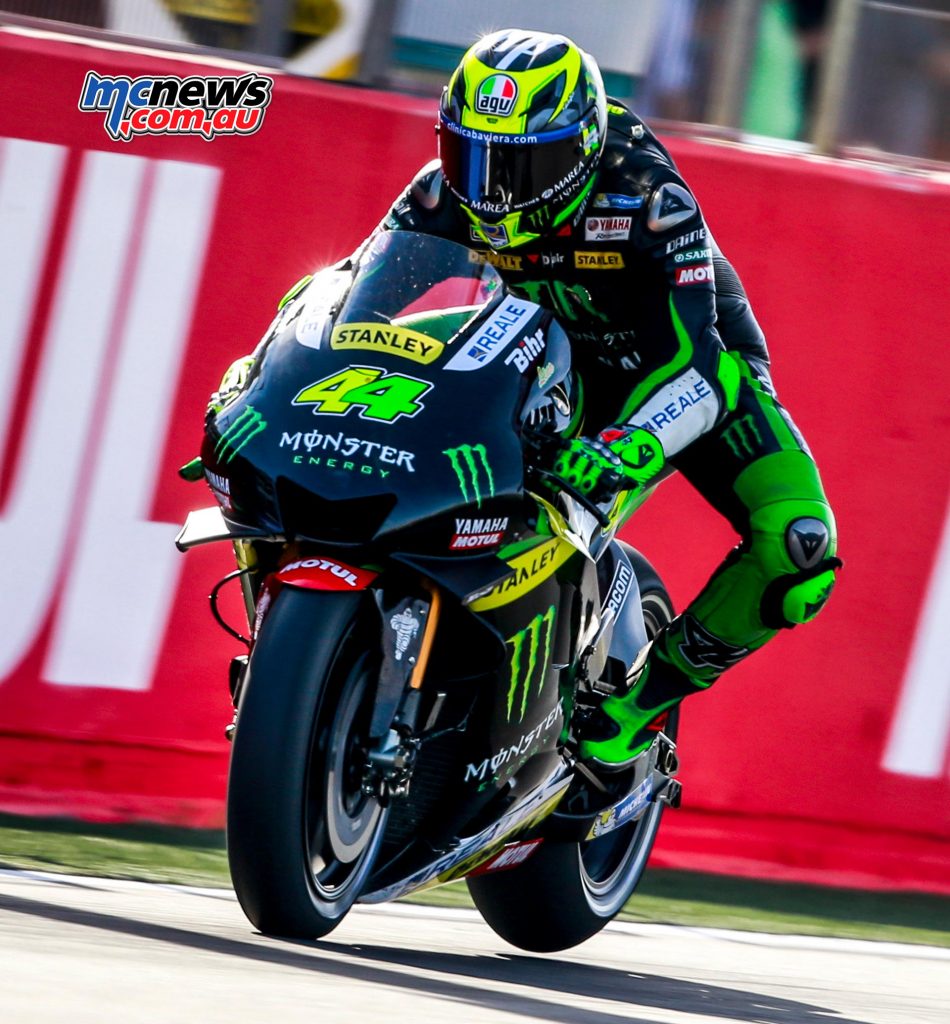 Andrea Iannone (Ducati Team) qualified in P7 as he continues to recover from cracked vertebrae sustained in Misano, with Dani Pedrosa (Repsol Honda Team) impressing on his return to competition – despite his ongoing recovery following a collarbone break in Motegi. The ‘Baby Samurai’ went straight through to Q2 and then qualified in P8 for the 2016 season finale.

“I’m really tired after the practice sessions today. I felt a little more pain than yesterday but I tried to improve my lap times. It was worth pushing this morning to go directly into Q2; it was a positive thing and a good step forward, but after FP4 I found it hard to regain energy for qualifying. I tried my hardest anyway but the times of the riders in front were very fast, and even behind there were riders in the low 1’30” range. It wasn’t easy for me to reach that level, but I’m happy overall and looking forward to tomorrow. We’ll have to choose well the rear tyre for the race; if tomorrow is cloudy, the choice won’t be so clear, so let’s wait and see. It will be a long race but I hope I can recover more energy and be as fast as possible.” 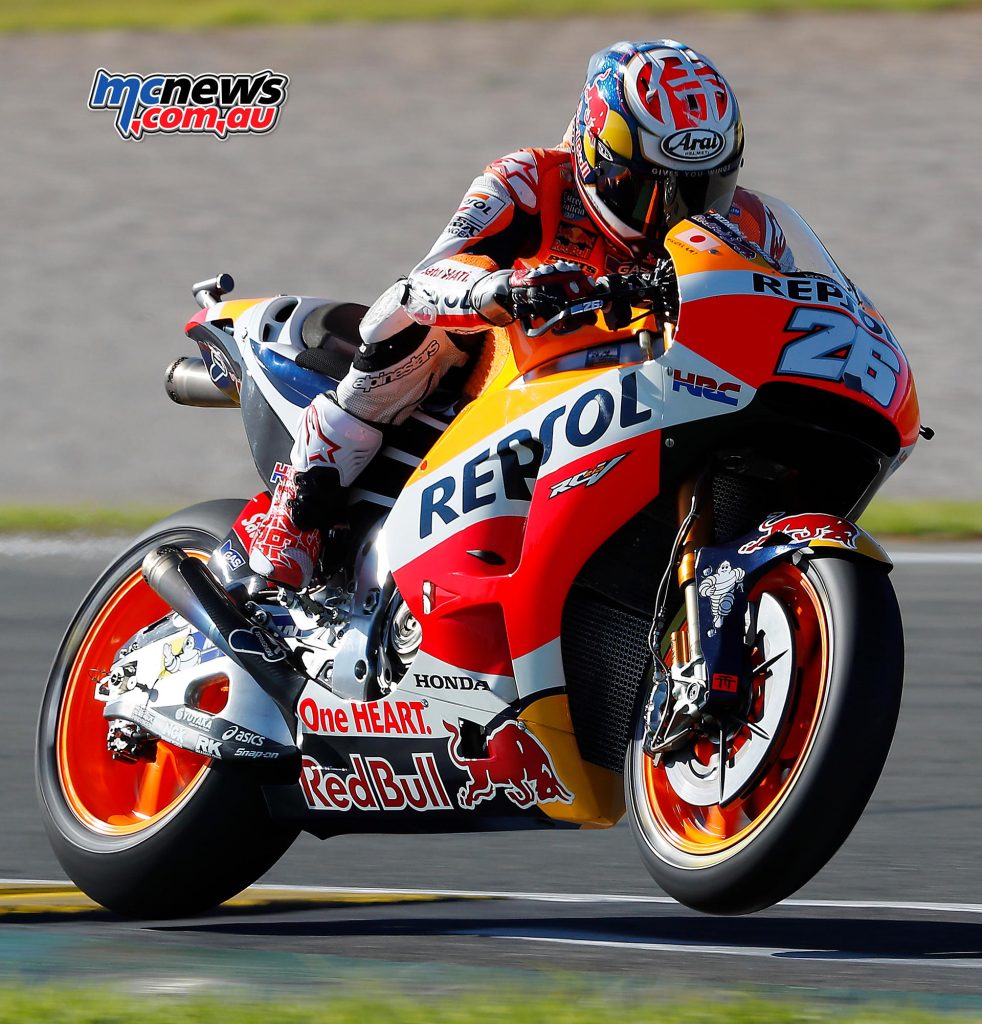 Aleix Espargaro (Team Suzuki Ecstar) qualified in ninth after a crash in the session, with Bradley Smith (Monster Yamaha Tech 3) completing the top ten – after also moving straight through to Q2.

After leading the charge from Q1, a crash for Cal Crutchlow (LCR Honda) saw the Brit rushing back to the pits for his second bike then ending the session in P11, ahead of fellow Q1 graduate Danilo Petrucci (Octo Pramac Yakhnich), who completes the Q2 timings in P12.

Jack Miller bounced back from a harmless fall in the morning FP3 session to qualify 15th on the grid with a best lap of 1’31.686. The 21-year-old Australian admitted to being cautious in qualifying with the lack of front-end feel but is confident of finding an improved set-up in the pre-race warm-up session. Miller’s crew worked through a range of options to try and maximise performance with the choice of four front tyre options provided by Michelin for the Valencia race.

“The crash I had in FP3 knocked my confidence a little so I just wanted to make sure I put together a solid qualifying session to be ready for the race tomorrow. I ran into some traffic on my first run but had a clear track on my second exit, my main struggle is through the middle sector of the lap. But overall I’m happy at this track and I feel good about improving my race pace for a strong performance to end the season.” 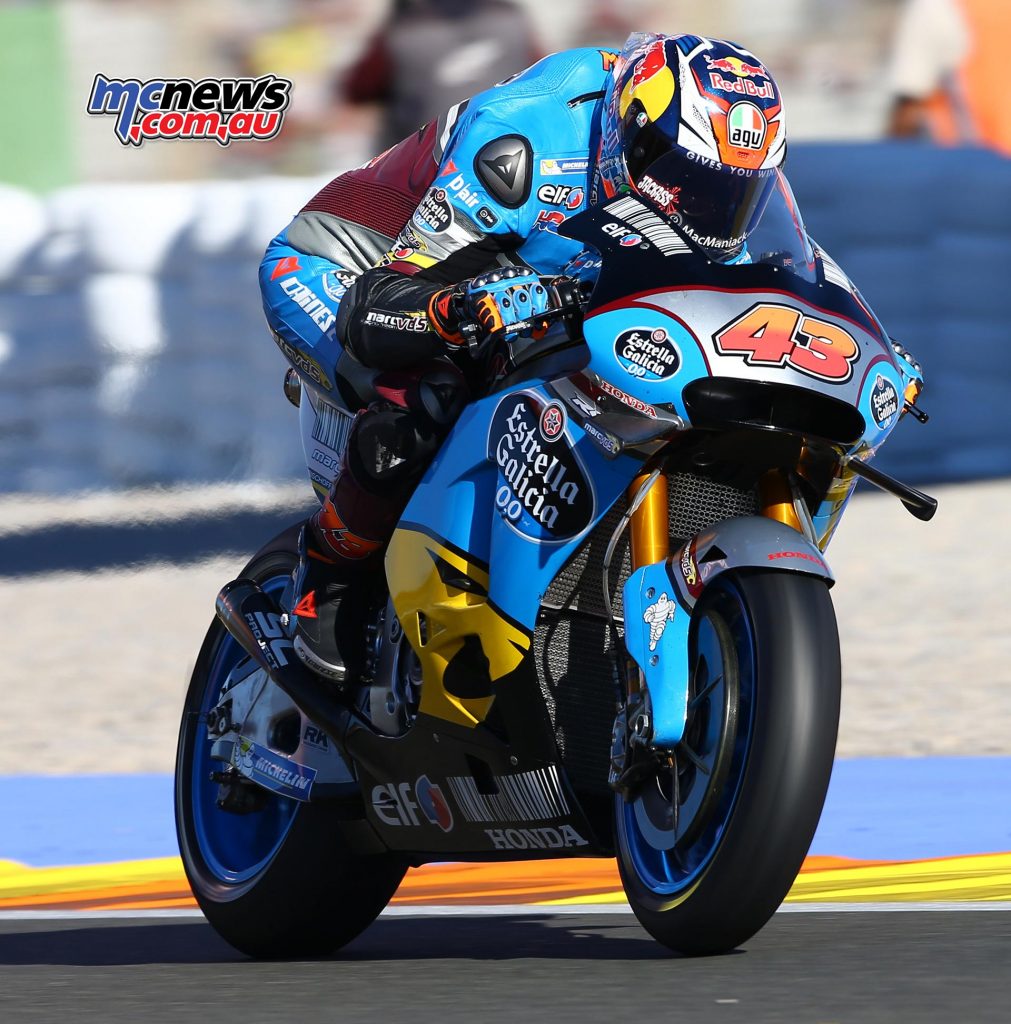 KTM continued to impress on their MotoGP debut with Mika Kallio qualifying 20th on the grid, ahead of Tito Rabat and Yonny Hernandez. The KTM RC16 was also competitive through the speed trap posting a best speed of 311km/h which compared favourably with the fastest non-Ducati which was Dani Pedrosa at 317.9km/h. Andrea Dovizioso on the Ducati had the outright best speed in qualifying with 321.2km/h from the Ducati.

Sunday dawns with the end of both an era and a history-maker of a season as Lorenzo faces his final race in Yamaha colours – from another record-breaking pole. 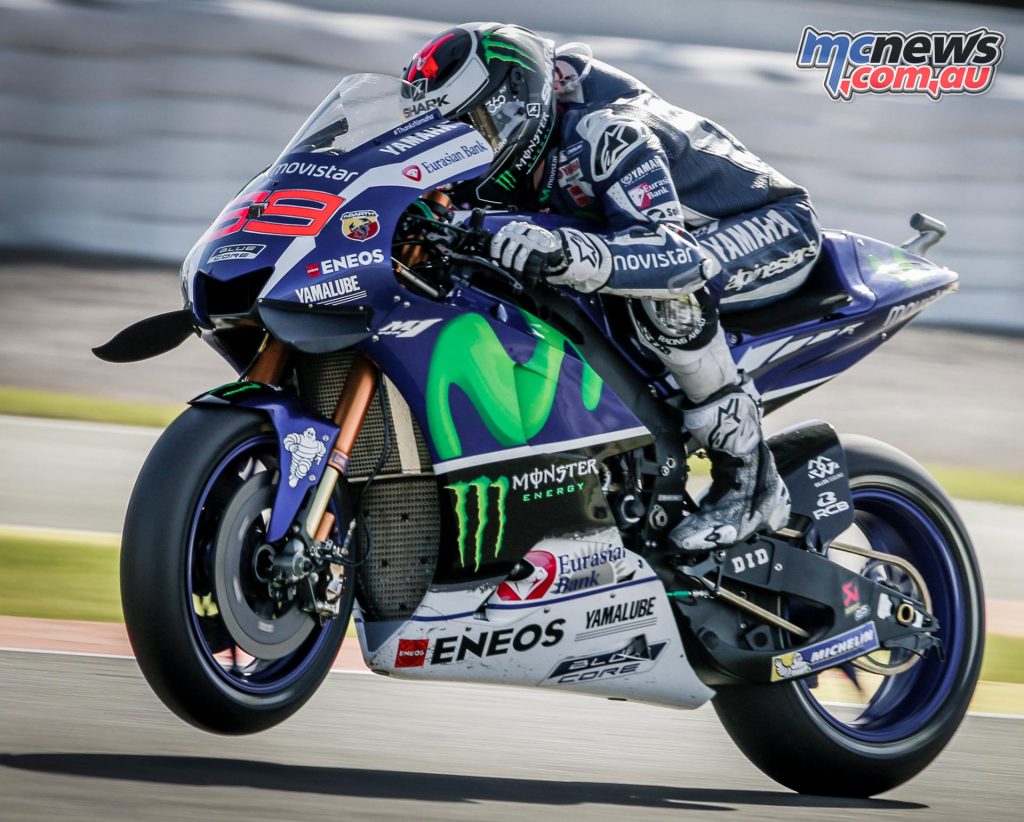 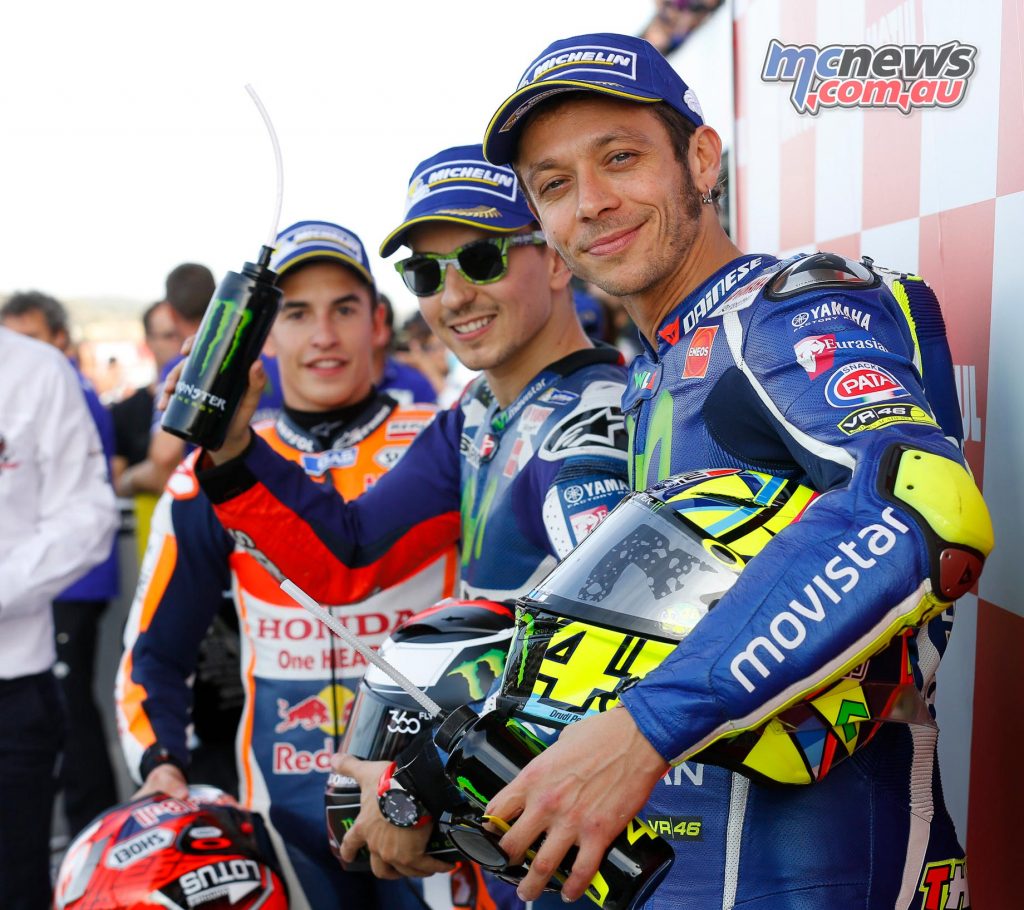 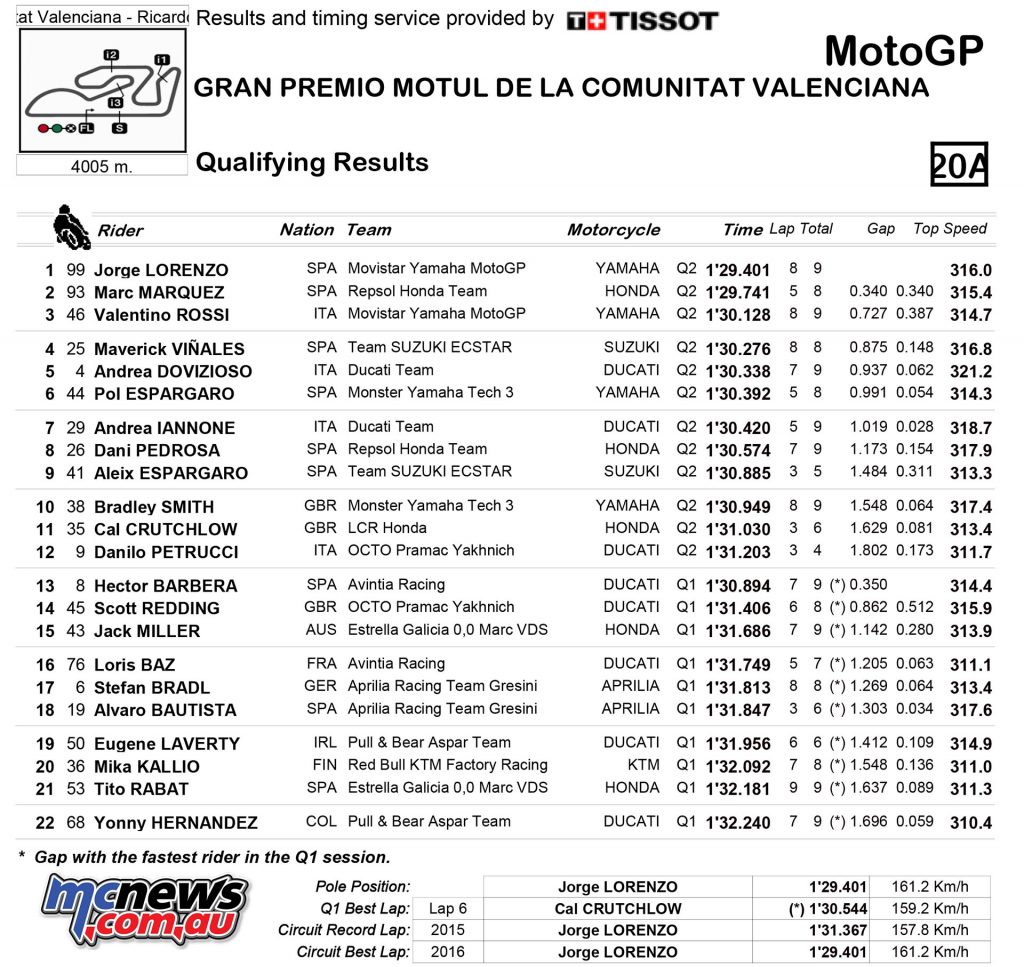 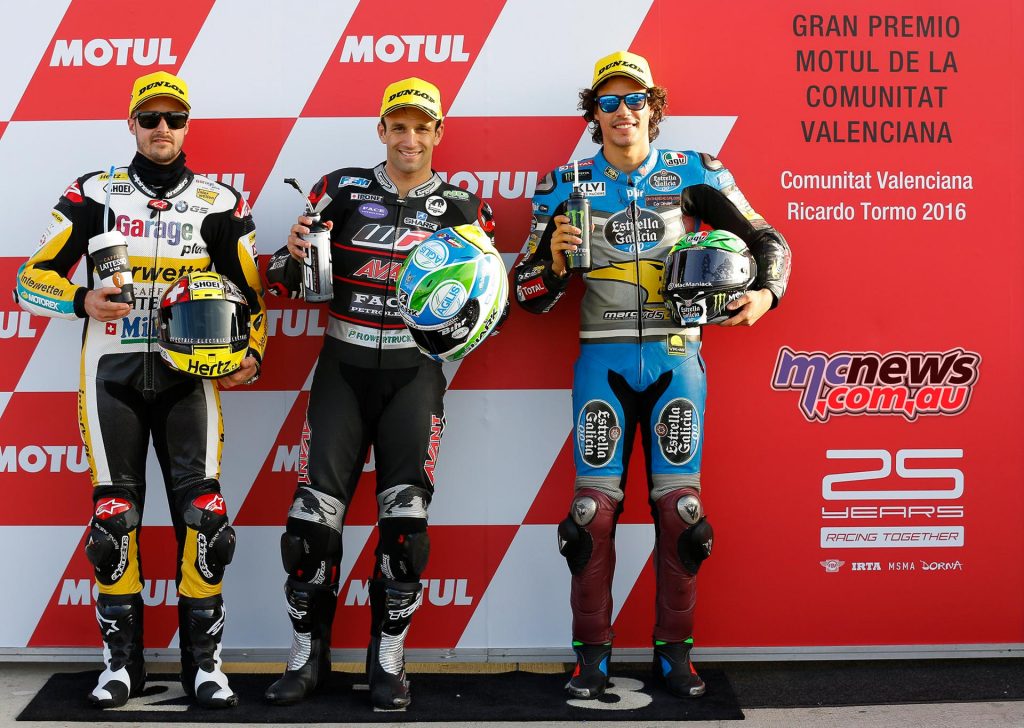 2015 and 2016 Moto2 World Champion Johann Zarco (Ajo Motorsport) starts his final intermediate class appearance from pole position in Valencia, beating Garage Plus Interwetten rider Tom Luthi to the top spot by only 0.006 seconds – with Franco Morbidelli (Estrella Galicia 0,0 Marc VDS) only another 0.048s back to complete the front row for the final showdown. 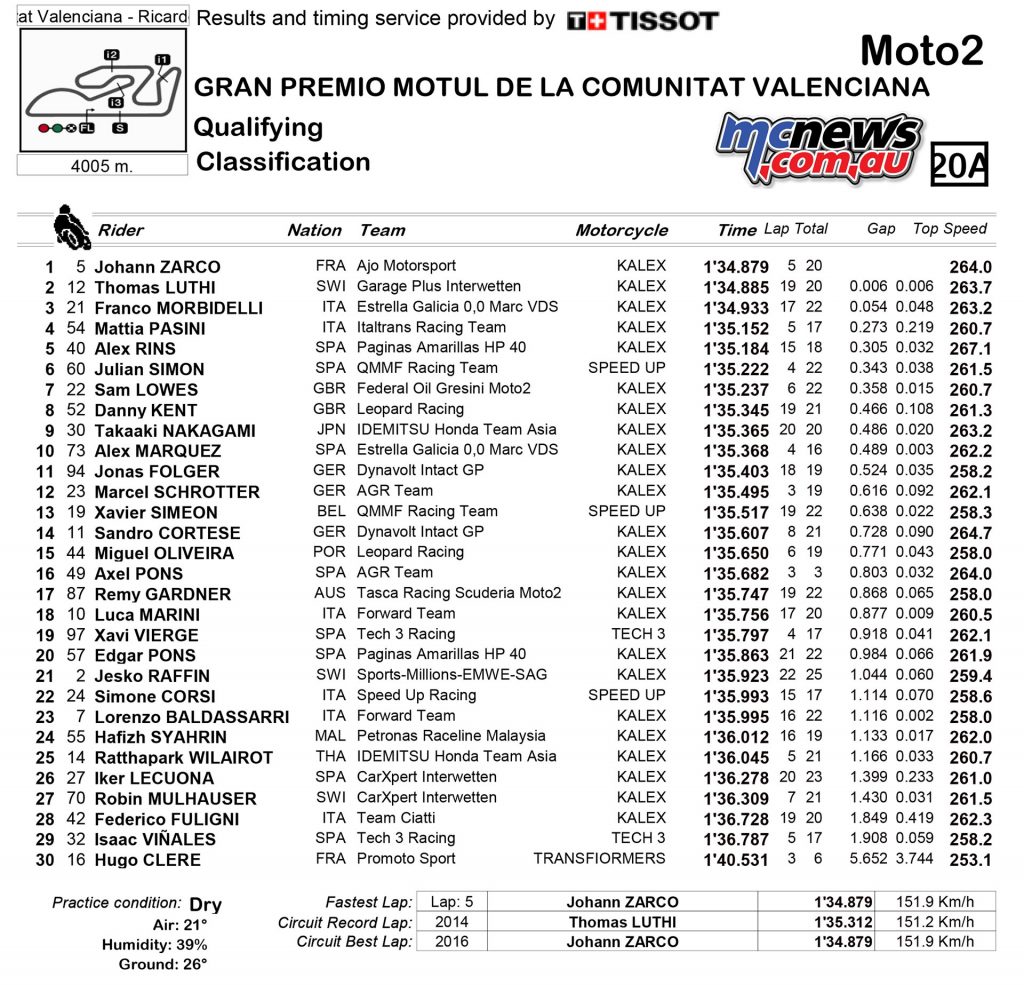 Fresh from his first podium in Phillip Island, Aron Canet (Estrella Galicia 0,0) put on a show for the home crowd in Valencia as he took his first ever pole position, on his final attempt – knocking none other than reigning Champion Brad Binder (Red Bull KTM Ajo) down to P2. Hiroki Ono (Honda Team Asia) was another who impressed, qualifying in P3 to complete the front row. 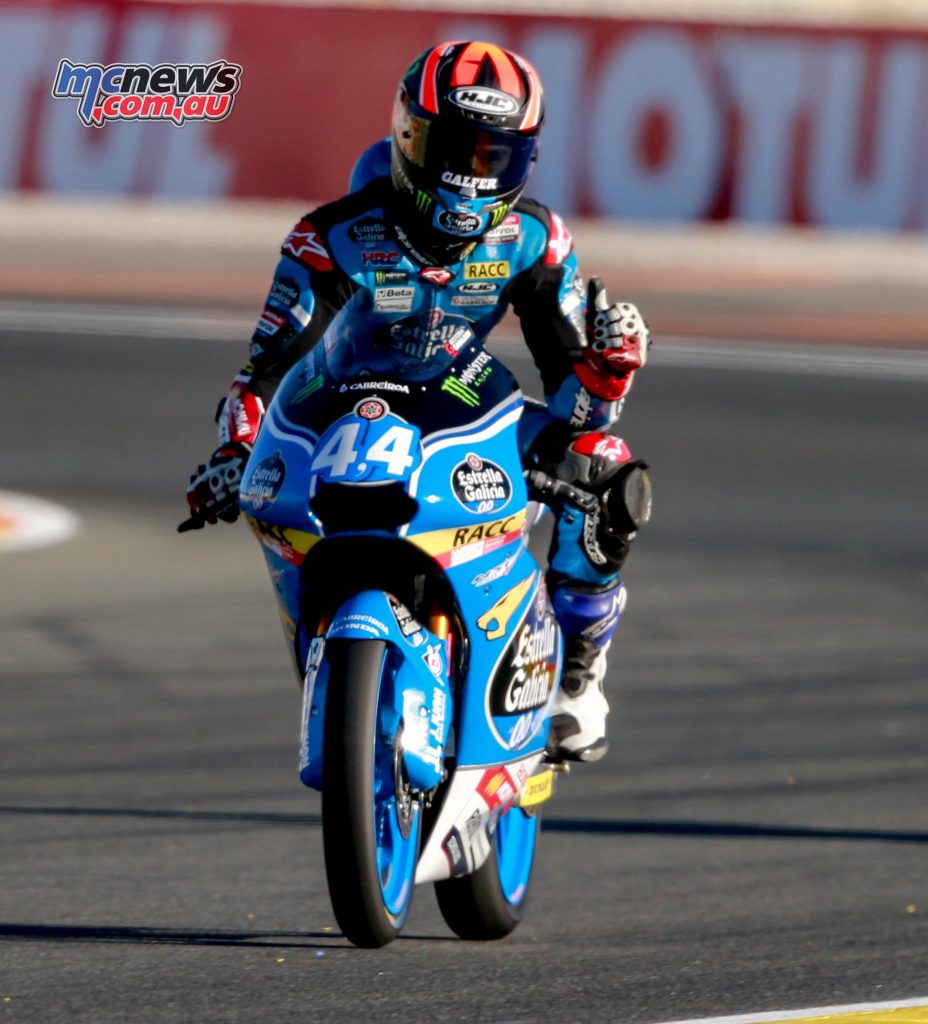 Nicolo Bulega (Sky Racing Team VR46) was the first of those in competition for the coveted Rookie of the Year title, as the Italian heads the second row ahead of Juanfran Guevara (RBA Racing). Guevara has shown incredible speed all weekend, and also impressed with a slightly different skill set in QP – gymnastics, penciling his name in as a contender for ‘Save of the Century’ as he stayed on his feet – but not his bike. Niccolo Antonelli (Ongetta-Rivacold) completes the second row.

Philipp Oettl (Schedl GP Racing) was top of the timesheets as the final shootout of the last ten minutes dawned, but the German was eventually pushed down to P7 by the flag – only 0.001 seconds ahead of eighth fastest, Dutch rookie Bo Bendsneyder (Red Bull KTM Ajo). Friday’s fastest – Enea Bastianini (Gresini Racing Moto3) – qualified in ninth, an impressive showing as the Italian comes back from an injury after sitting out Sepang.

Bastianini’s competition for second in the standings had a tough session – with Francesco Bagnaia (Pull&Bear Aspar Mahindra) in P16, and local hero Jorge Navarro (Estrella Galicia 0,0) in seventeenth. 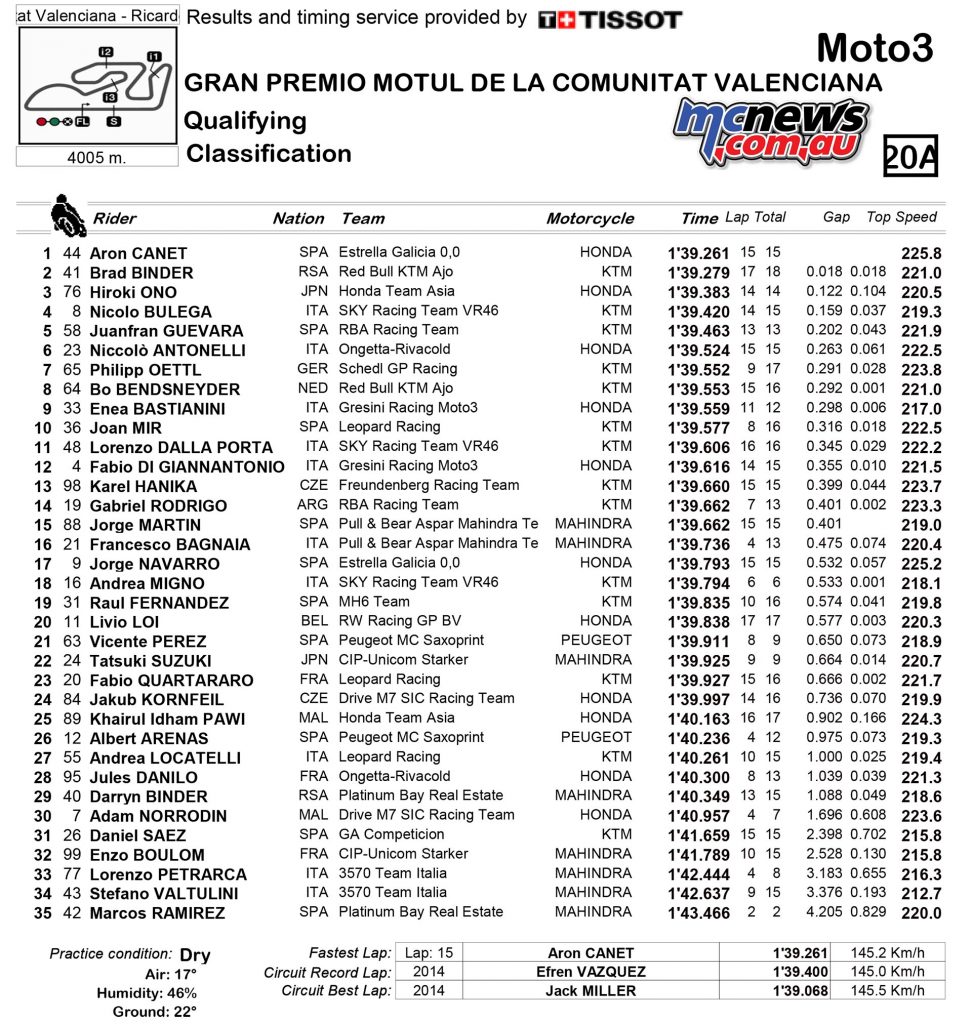 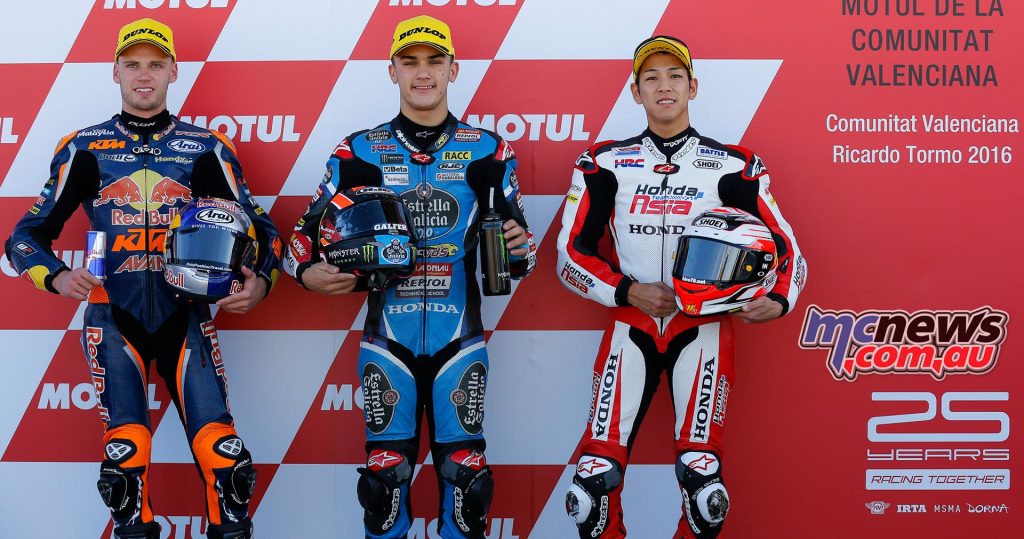