Dani Pedrosa (Repsol Honda Team) took a stunning pole position in the heat haze of the Catalan GP, storming clear of the field by three tenths to return to the top for the second time this year.

“I’m very happy because taking pole is always very difficult, and doing it in front of your home fans is just amazing. Last year we struggled a lot in qualifying, while this season we’ve already earned two poles, so I wish to thank my team for the good work. We’ve worked really hard on this aspect, and we’re getting better and better. The conditions were quite difficult today, especially for the tyres as it was very hot and the grip wasn’t the best. We tried to manage the situation as well as possible, working a lot on the setup to improve tyre life. The tyres will be the key to the race tomorrow; it’d be great to have the same feeling from today, but we’ll wait and see. We’ll just remain focused and be prepared to do our best.” 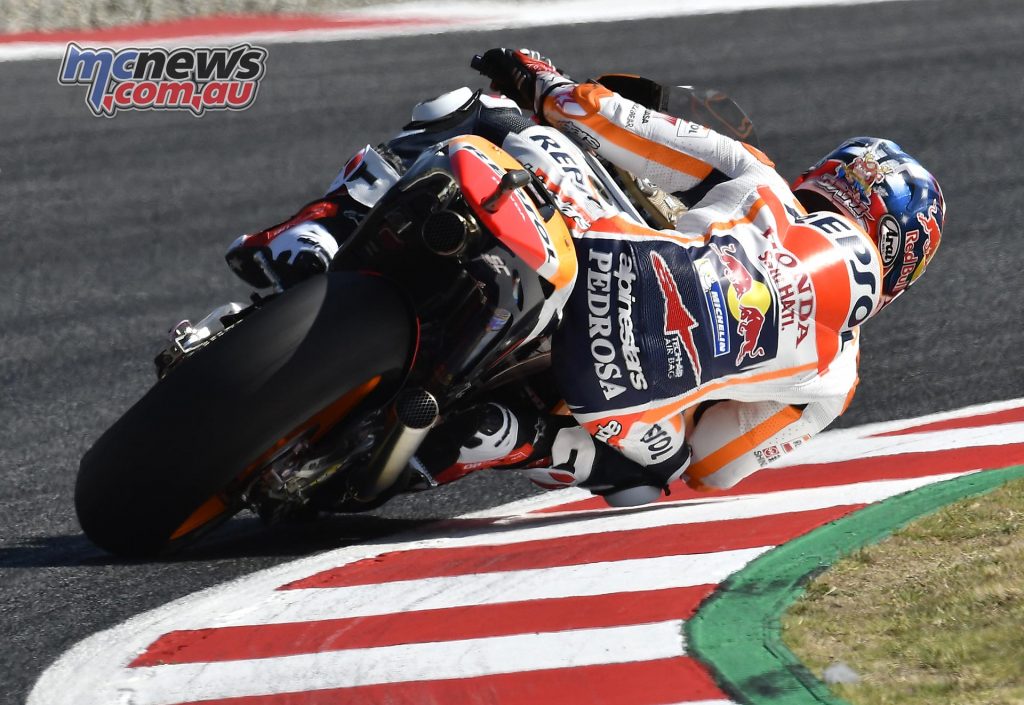 Compatriot Jorge Lorenzo (Ducati Team) shot into second for his first front row start in red – after also proving second fastest on Friday – as two of the home heroes led the charge.

“Today finally we were able to do a really good qualifying session and for the first time I start from the front row on a Ducati. Montmeló is a circuit that I like a lot, and above all it allows me to express myself to the maximum over one lap. In this afternoon’s free practice session we improved the bike a lot and we were able to make it more stable and keep up quite a fast pace. For tomorrow it will be very important to have good grip with the rear tyre in the last part of the race. I’m happy with today’s result and tomorrow morning in the warm-up we’ll try and make some final modifications to put us in a position to fight for a good result in the race.” 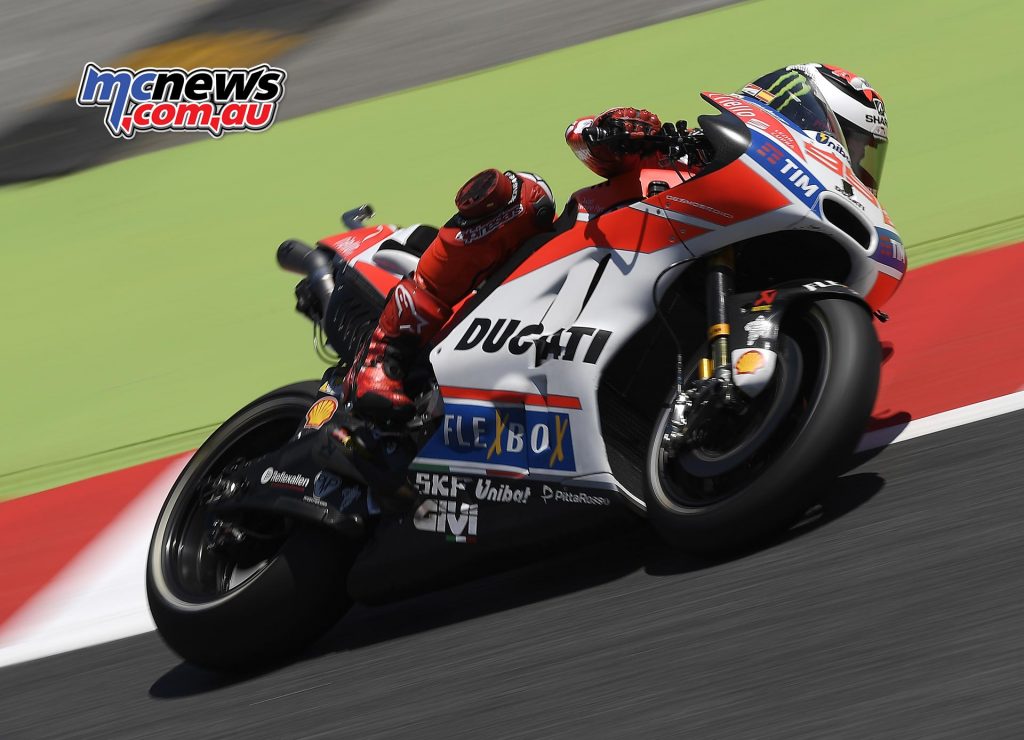 Third was an incredible front row for Mugello podium finisher Danilo Petrucci (Octo Pramac Racing), as the Italian kept his momentum from a stunning home race last time out. 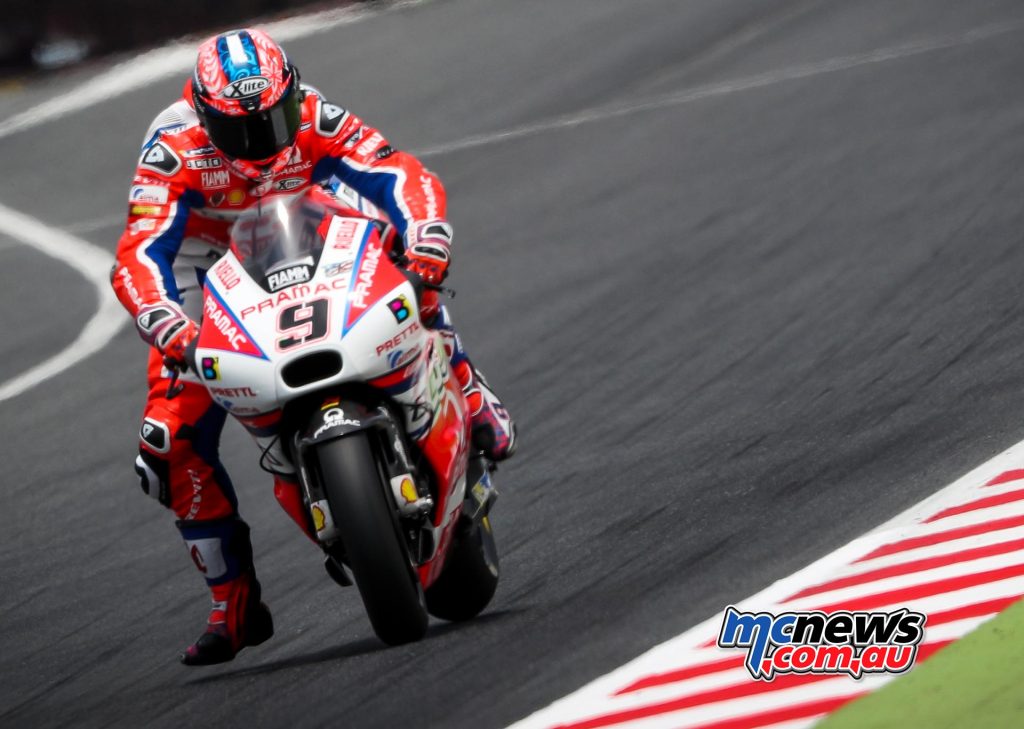 Marc Marquez (Repsol Honda Team) was one of the key headline makers, as the reigning Champion will head the second row but suffered a spate of crashes on Saturday. His final fall in Q2 took him out of contention for pole, with Marquez looking to wipe the slate clean overnight before trying to hunt down the win.

“Fourth on the grid, four crashes—today was a bit challenging for us, but in reality we’re not so bad. We started the day very well; I felt very comfortable in FP3, but then I crashed in FP4 and everything followed from that. We were able to prepare the bike for the qualifying session, but the feeling wasn’t exactly the same; when the temperature gets so high, the front tyre moves a lot. But I was at my home GP, so I just gave it my all and tried 100%. I crashed, but in the end we’ll start from fourth, which isn’t that bad. I think if I’m able to keep calm and ride more smoothly, we’ll be okay. I look forward to having a great race tomorrow, and to fighting for the podium.” 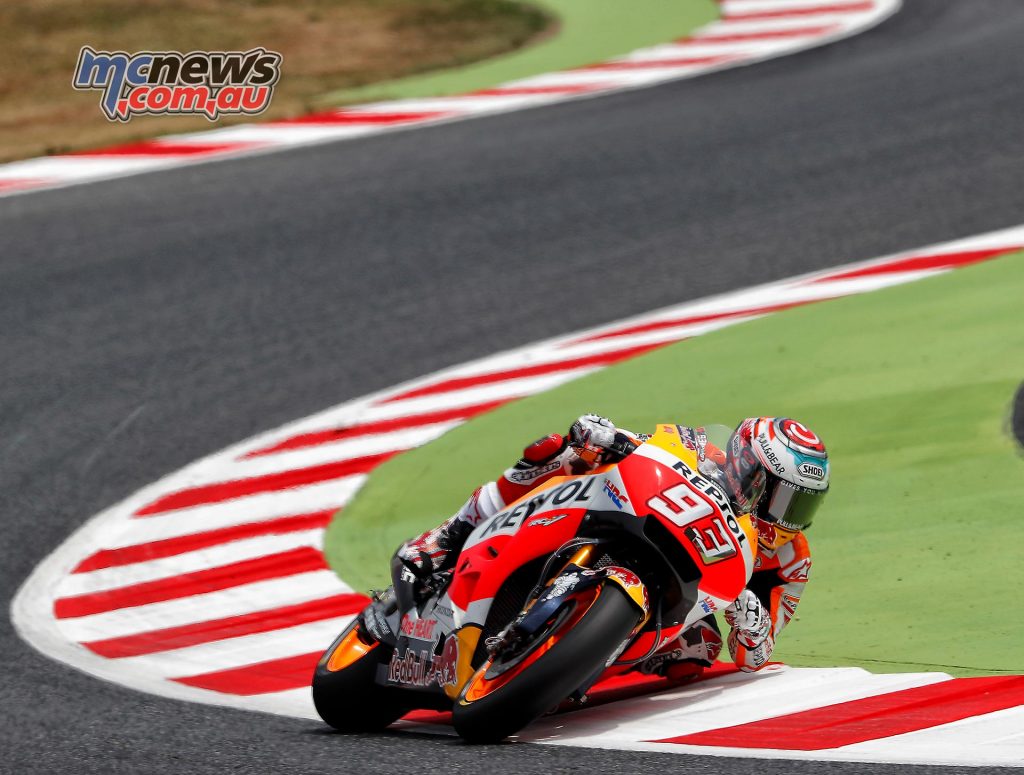 The sun shone more on Aleix Espargaro (Aprilia Racing Team Gresini) in fifth as his impressive pace from the morning continued into Q2, with another home hero just behind him in sixth – Reale Avintia Racing’s Hector Barbera.

“Compared to yesterday we improved the bike a little bit, but for us the problem isn‘t the bike, but rather a combination of factors. I‘ve tried many set-ups today and nothing was working, not even our basic set-up. I was just going to try to do my best and that‘s what I did. I aim to make a good start tomorrow and then I will try my best again.”

The headlines were also thick and fast in Q1, as nine-time World Champion Valentino Rossi (Movistar Yamaha MotoGP) missed the cut only marginally to start P13, ahead of rookie sensation Johann Zarco (Monster Yamaha Tech 3). Cal Crutchlow (LCR Honda) lines up P17 and was another crasher.

“We had some good ideas for today, so I expected to be more competitive, but it‘s a little bit like the situation in Jerez, with a lack of grip we suffer a lot with the tyres and the qualifying was bad. I was also unlucky I lost the entry into Q2 by just one position, so for sure it‘s difficult because the pace is not fantastic. It will be a hard race for everybody because the tyres seem to struggle to produce grip, especially in the hot conditions it will be hard, but we will try something else tomorrow morning and we‘ll see.”

Jack Miller set a platform for a strong race with the tenth fastest time in race trim during the FP4 session in advance of qualifying. Miller’s qualifying lap of 1’44.829 was almost 1.5s faster than his FP4 time as he focussed on maximising the potential of the new Michelin front tyre.

“I feel better on the bike than I did in Mugello last weekend and I’m getting to grips with this new front tyre and making progress in every session to adapt the set-up. It is not an ideal situation because I missed the test here a couple weeks ago. I would rather be further up the grid but there are positives with my race pace and the key will be managing the tyre life, the performance drops quite a lot after just a few laps in these hot conditions.” 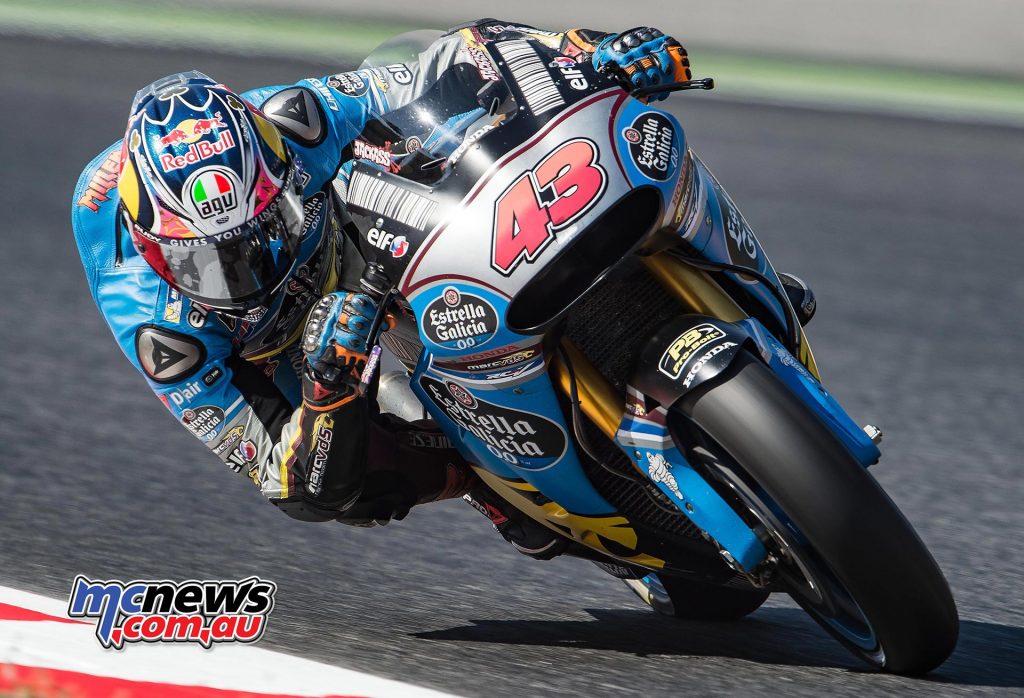 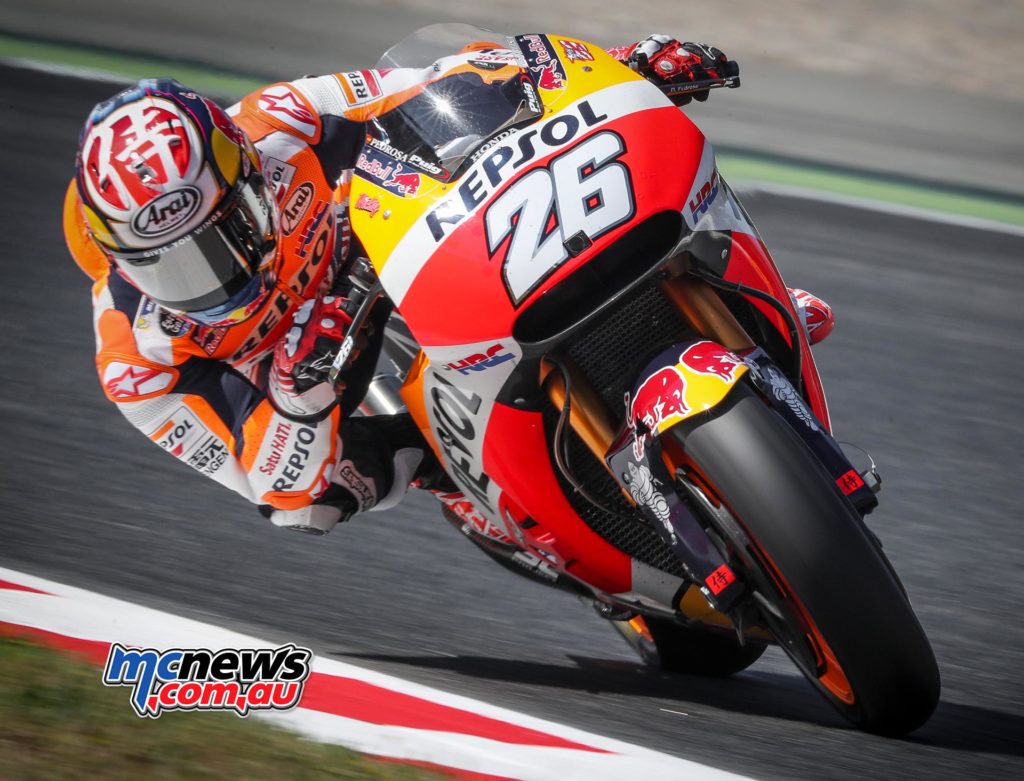 Alex Marquez (EG 0,0 Marc VDS) has taken a second scorching pole of the year – and second this season on home turf – in the Gran Premi Monster Energy de Catalunya, a tenth clear of Mugello winner Mattia Pasini (Italtrans Racing Team) in second. Lorenzo Baldassarri (Forward Racing Team) lines up in P3, half a second behind the two pacesetters in the hot Saturday afternoon sun in Barcelona to bounce back in style from a tough home GP last time out. 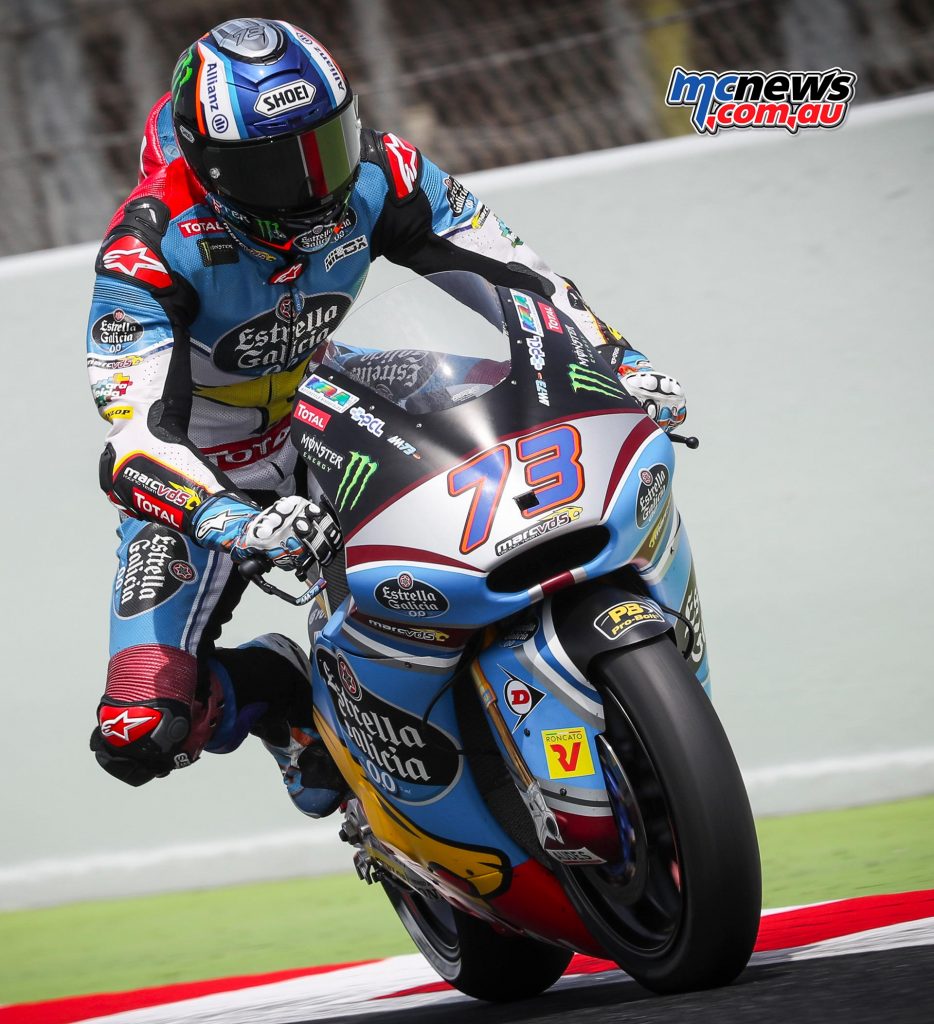 Takaaki Nakagami (Idemitsu Honda Team Asia) heads up the second row after shooting up the timesheets in the latter stages as he gets back on track after a DNF through no fault of his own in Italy, ahead of fellow title hopeful Tom Lüthi (CarXpert Interwetten) in fifth. Championship leader Franco Morbidelli (EG 0,0 Marc VDS), who also crashed on Friday, was sixth quickest.

Miguel Oliveira (Red Bull KTM Ajo) was back in the battle in sixth for the new KTM chassis, ahead of home superstar rookie Jorge Navarro (Federal Oil Gresini Moto2), who keeps some good momentum going from Italy. Axel Pons (RW Racing GP) is another home hero and lines up in P9, with compatriot Isaac Viñales (BE-A-VIP SAG Team) another to impress as he locked out the top ten.

After a frenetic last dash for the line in Moto3 qualifying, it’s home hero Jorge Martin (Del Conca Gresini Moto3) who will be starting from pole position in the Catalan GP – with an incredible margin over the field of over six tenths. It’s the fifth time the Spaniard has topped the timesheets in qualifying this season. 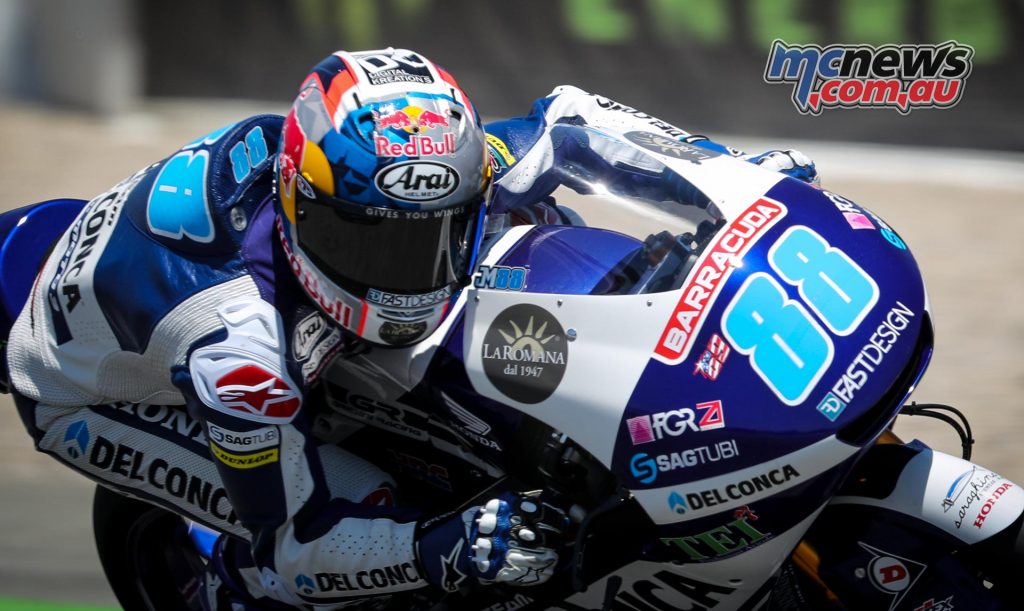 Aron Canet (Estrella Galicia 0,0) looked set for pole until the final minutes but was pushed down to second – the same as his position in the Championship – ahead of first time podium finisher in Mugello Juanfran Guevara (RBA BOE Racing) in third. Canet, however, was also given a three-place grid penalty and will therefore drop off the front row.

Gabriel Rodrigo (RBA BOE Racing Team) was P11, ahead of a solid qualifying position for Lorenzo Dalla Porta (Aspar Mahindra Moto3) to get back towards the front in P12 for the Indian manufacturer.