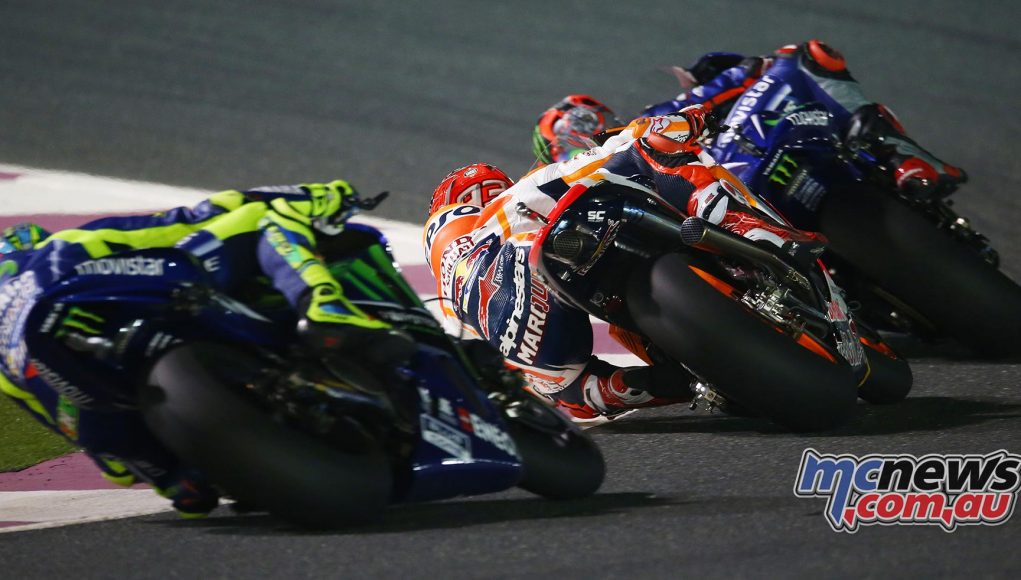 It was all delay, confusion and tyre-swapping at the opening round of the 2017 MotoGP championship.

The desert night was fizzing with humidity and the temperature was dropping. The longer everyone sat waiting on the grid, the cooler and more humid it would get. The announcers discussed the “dew point” like it was the governing factor of the race.

The race was first shortened by one lap, and then by two, and riders were offered two more sighting laps because there was some concern about a greasy Turn 14, where some of them rode off the damp kerb on the first sighting lap

This prompted helmet-off huddles on the grid with riders and team bosses and race officials all waving their arms around and shaking their heads. Tyres were feverishly being swapped from Hard to Medium.

But Maverick Vinales sat on pole position like a sphinx.

After a 45-minute delay, everyone was officially told to “be careful”  and the race and the season kicked off.

Iannone immediately speared into the lead, followed by Vinales and Zarco, who was absolutely ruthless in his determination not to be swamped by the pack, and hammered his way passed everyone four corners into the opening lap.

Rossi got a good start but copped a whack from Crutchlow, which left his on-board camera dangling from the back of his bike for the remainder of the race. Lorenzo was seeking peace and tranquillity as he rode backwards to 16th place.

Marquez also pushed hard in the opening corners and ground paint off Iannone’s Suzuki even as Zarco started to gap them.

The first lap finished with Zarco leading, and Marquez keeping him in sight as Iannone chewed on his rear wheel while keeping Vinales, Pedrosa and Rossi at bay.

Lorenzo, starting from 12th, ran wide and felt he should maybe try 17th place for a while.

By the start of lap three, Rossi was the fastest man on the track, and Dovizioso also felt it was time to stop screwing about and moved up to the pointy end. Marquez and Iannone were racing each other for second, which allowed Zarco to eke out a gap at the front. And at the end of lap three, the five of them were beginning to gap the field.

With 17 laps to go, Marquez was running in second and was now the fastest man on the track. Dovi slammed past Iannone, Rossi ate Pedrosa and pinned himself to Vinales’s back wheel as Zarco was starting pull away from Marquez. Lorenzo bravely moved into 16th.

On the next lap Crutchlow examined the gravel beyond Turn 16, but remounted and went off to see if he could make Lorenzo suffer even more.

Zarco was now leading by more than a second over Marquez, who was starting to struggle, presumably over the arrival of dew. Behind him Dovi closed in and finally passed him, while Vinales and Rossi were also closing him down.

Up at the back Lorenzo managed to squeeze by Folger and looked serene in 15th. Cal crashed again and Bautista appeared behind Rossi, who was doggedly trailing Vinales, Iannone, Marquez and Dovizioso.

Then Zarco low-sided himself out of being the most popular Frenchman in the world at Turn 2, and suddenly Dovi was leading.

Behind him, Marquez, Iannone, Vinales and Rossi were clearly wondering about the tyre choices they had made. Lorenzo was racing Petrucci for 13th and Jack Miller was steady in eighth.

Bautista fell off the next lap, and with 12 laps to go, it was Dovi out the front, Iannone and Marquez slamming each other with handbags, and Vinales and Rossi freight-training it through the night like good team-mates do.

The battle for second between Marquez and The Maniac intensified on the next lap, which allowed Dovi to push his lead out to almost a second.

Iannone then did the right thing and ploughed off the track with 10 laps to go, which allowed Lorenzo’s failure in the middle of the pack to be less terrible and he moved heroically into ninth.

There were now four contenders at the font. Dovi’s lead was still more than a second, and Marquez was coming under ever more relentless pressure from Vinales and Rossi.

Maverick finally did Marquez over under brakes at the end of the main straight, and it would soon be Rossi’s turn. Miller, Redding and Asparagus A belted it out for sixth while Pedrosa kept developing the Honda in fifth.

Nine laps from the end saw Marquez relegated to fourth by Rossi. Dovi was still leading, but his time at the front was doomed.

Vinales was coming. It was obvious it was just going to be a matter of time and all Dovi could do was rely on the sheer top speed of the Ducati down the straight.

With seven laps left, Vinales was lapping three-tenths of a second faster than Dovizioso and finally overtook him. Interestingly, Rossi was now the fastest man on the track, and there was no threat from Marquez who was riding all by himself back in fourth.

The speed of the Ducati would not be denied and Dovi overtook Vinales at the end of the main straight with five laps to run.

Vinales now knew what he had to do. He could pass Dovi, but then he had to be far enough ahead of him not to be swamped down the straight. And it was even starting to look like Rossi might break Dovi’s heart a little more as he closed up on them both. The Doctor was still the fastest rider on the track.

Petrucci munted himself, but Lorenzo was now riding backwards again and contesting 10th from blokes he had never even heard of.

Vinales passed Dovi on Lap 16, and Dovi passed him back again at the end of the main straight, and was nervously leading the race with only three laps to go.

It was now obviously a two-horse race, with Rossi content to ride for third and Lorenzo settling for 11th almost 20 seconds shy of the leading trio.

Vinales put his head down, leading handily into the last lap and not all the Ducati horsepower in the world was going to catch him.

Dovi settled for a hard-fought second with Rossi on the third step of the podium. Marquez was a lonely fourth, with Dani Pedrosa almost a second shy of him in fifth. Asparagus A gave Aprilia its highest ever finish in sixth, followed by Redding, Miller, Rins and Folger. And then Lorenzo, who managed to keep Baz, Barbera and Abram from pointing and laughing at him in the early hours of the morning.

Tits Rabbit managed not to come last, but he was racing the new KTMs of Asparagus P and Brad Smith so a pay-rise is unlikely. Sam Lowes wobbled home in last place, 47 seconds away from his first theoretical MotoGP win.