Viñales on pole from Dovizioso at Misano

Marc Marquez rounds out front row despite another crash 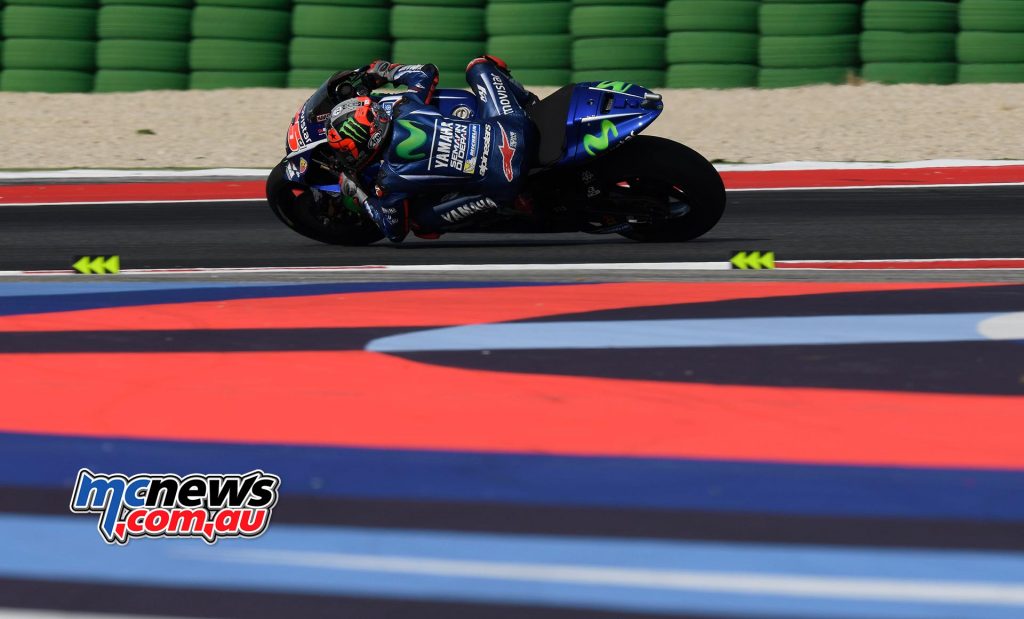 Despite doubts about the weather, Saturday gave the grid good conditions for practice and qualifying at Misano, and pole position came down to a three-way duel. Dovizioso was the man on provisional pole as Viñales and Marquez began their final pushes, with the younger Spaniard going fastest on his penultimate effort and then rolling off after Marquez fell out of contention.

The qualifying went really well. I was feeling great on the bike, the team did a really good job! Yesterday and especially this afternoon we modified the bike a little bit and I was feeling better, so for tomorrow the strategy will be to try and stay consistent, keep the tyres on a good temperature – it‘s important not to have cold tyres, especially on the first laps. I‘m going to start from first and try to ride at my own pace. I‘m happy with how things are going and let‘s see what will happen tomorrow. I‘m confident that we can do a great race. For sure there are many riders who can be contenders. For tomorrow, we will have to try to make another step, if we want to win this race.

“The qualifying went really well. I was feeling great on the bike, the team did a really good job! Yesterday and especially this afternoon we modified the bike a little bit and I was feeling better, so for tomorrow the strategy will be to try and stay consistent, keep the tyres on a good temperature – it‘s important not to have cold tyres, especially on the first laps. I‘m going to start from first and try to ride at my own pace. I‘m happy with how things are going and let‘s see what will happen tomorrow. I‘m confident that we can do a great race. For sure there are many riders who can be contenders. For tomorrow, we will have to try to make another step, if we want to win this race.” 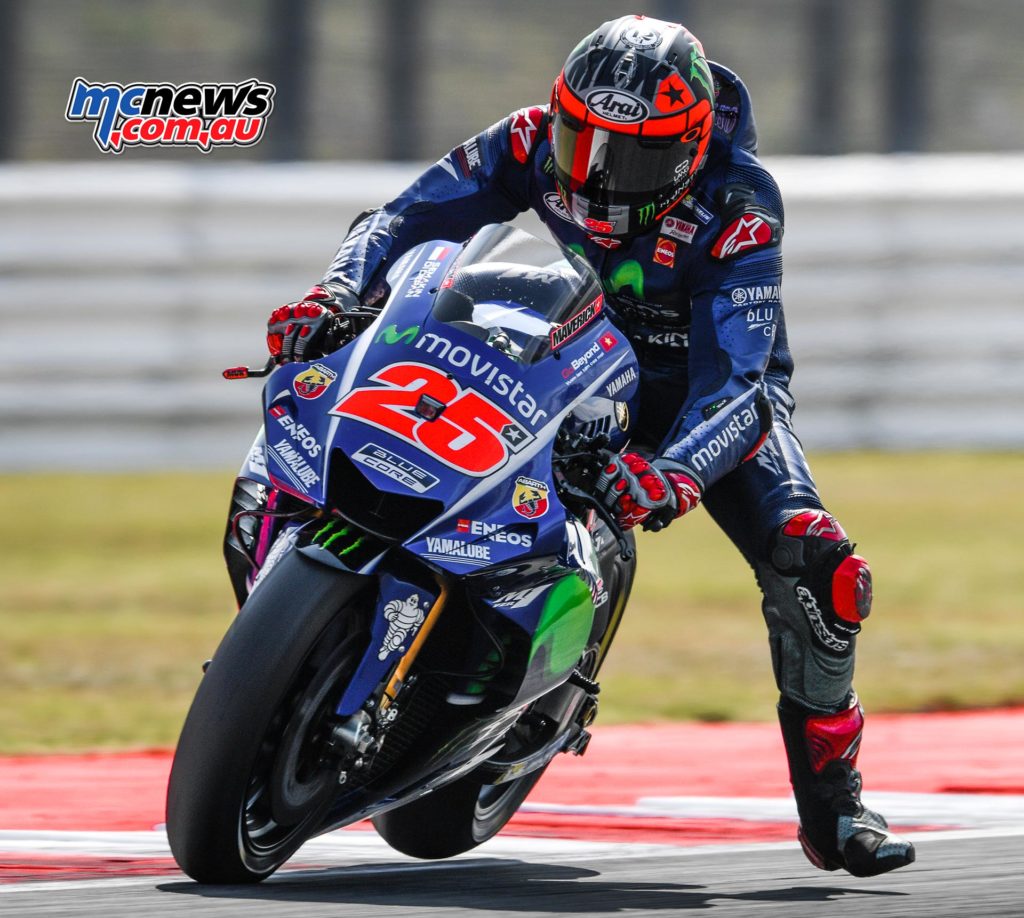 “I’m really happy with this front row start! To be honest, second place was a bit unexpected because we worked a lot in FP4 with used tyres and I didn’t have a great feeling with the bike, but when we started the qualifying session I realized that we could be very fast. So I concentrated on getting the best out of the second tyre. In the end I set a really good time and this confirms that we are also quick here at Misano.” 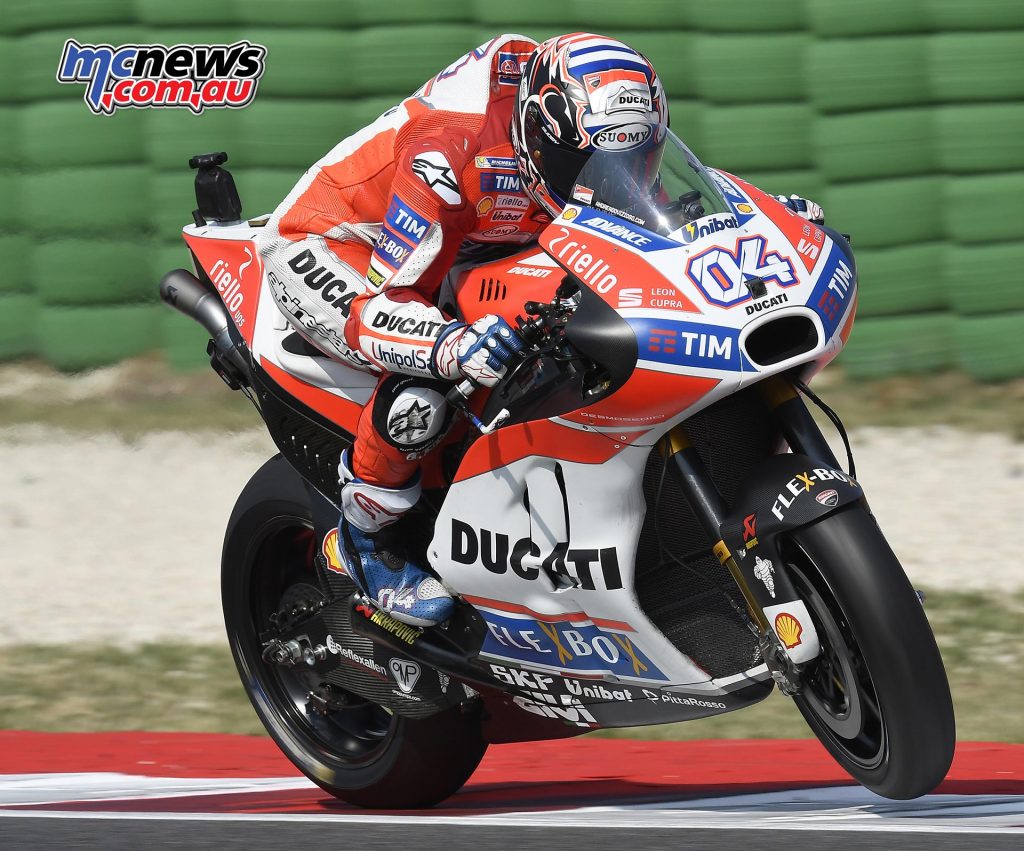 “All in all we’re satisfied with the result. In qualifying you always push more than usual, but honestly, on that lap during the second exit I had already slowed a little bit because I had touched the red part of the asphalt in the fast corner. Then I went a little wide and I touched the white line and lost the front. It was my mistake because we had the possibility of trying to go for the pole, but it’s okay; we’re on front row, our pace for tomorrow is good, and we’re happy with that. Tomorrow the track temperature will probably be different, lower than today, and to make the correct rear-tyre choice will be a key point for the race. We’re basically fine with more than one option, and we’ll try to manage every situation well.” 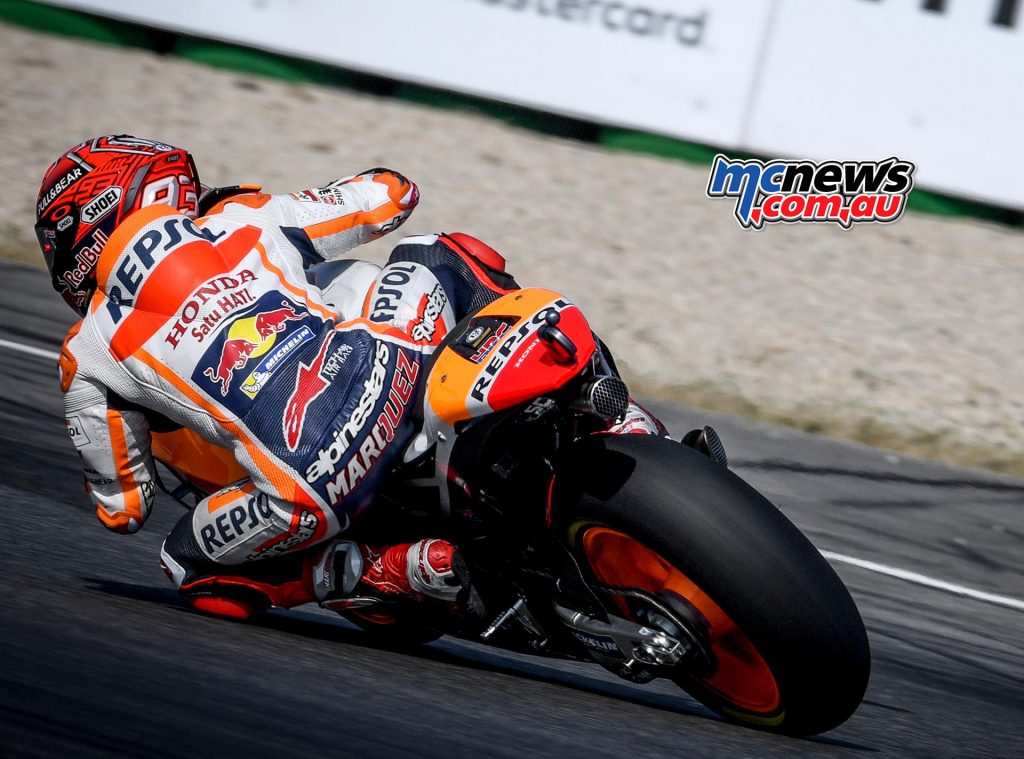 Fourth was a late dash from Cal Crutchlow (LCR Honda), riding with a finger injury, and the Brit headed five-time World Champion Jorge Lorenzo (Ducati Team) by only 0.024 seconds.

“We’re obviously happy with the qualifying session, I’d wanted to be on the front row, but today it wasn’t possible. That’s something to try for again in the next races, but for now I’m happy with fourth place. I think we’ve done a good job as a team all weekend so far, the crew have worked very hard for me. It hasn’t been an easy run-up to this grand prix, so to be in good shape for Sunday’s race has been difficult. However, I feel we’ve got the pace to be there, maybe not to win, but perhaps we can aim for the podium. Top five I would be happy, but I have to look towards the rostrum.“The finger is feeling better. There’s no pain when I’m on the bike, but it’s really uncomfortable and it’s going to be like that for a month. I can’t keep my finger on the handlebar so it’s not the best situation. I have to compensate with my other arm and different parts of my body, so it doesn’t feel natural. We’ll work on it with the team and the doctors to try and improve the situation for Aragon.”

“My position, fifth on row 2, isn’t fantastic but I’m quite happy, especially because of the positive progress we made starting in FP4. I had some excellent sensations with the medium rear tyre and did two or three very good laps. I think that if the weather remains good tomorrow, we can stay in the leading group for the entire race. However it looks like it’s going to rain and so the situation could change completely and become complicated for everyone. At any rate, even if we have to race on a wet surface, I’m confident we can score a good result.” 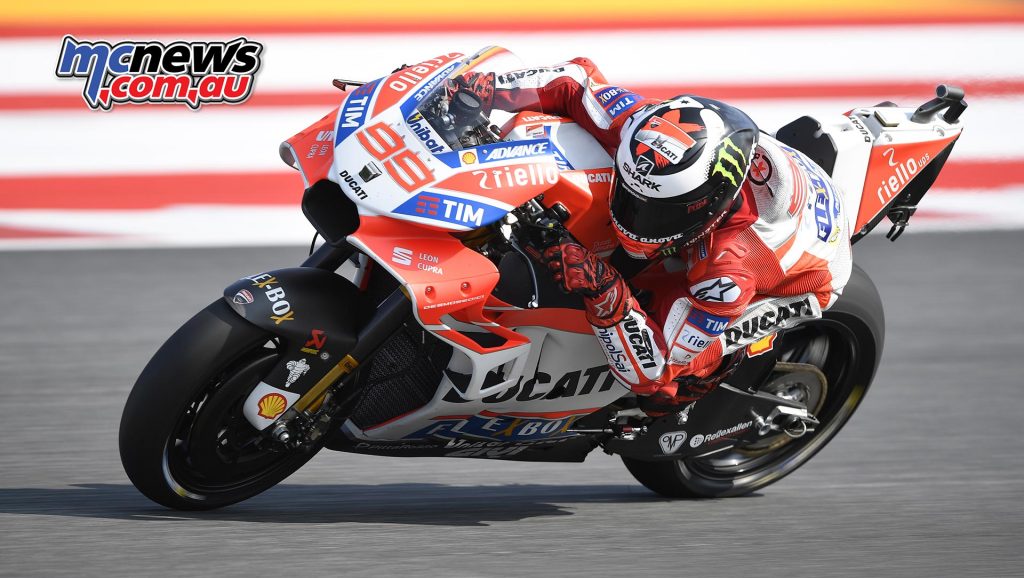 Joining the experienced duo on Row 2 is rookie Johann Zarco (Monster Yamaha Tech 3), who bounced back from a crash on Saturday morning to take a second row start in sixth.

From Q1, P13 is Hector Barbera (Reale Avintia Racing) despite a big crash earlier on Saturday, with Jack Miller (EG 0,0 Marc VDS) in fourteenth. The young Australian frustrated by having his best lap deleted in penalty for breaching track limits.

“It is really disappointing to have my lap time cancelled after putting in such a big effort, it doesn’t really feel like racing. I haven’t seen the replay and if I was completely out of the track then I can understand the decision. But the upside is I have strong pace for the race and the time I did was good given the conditions this weekend. The weather forecast is for rain tomorrow so we’ll have to plan around that but I’m feeling positive about challenging for a good haul of points.” 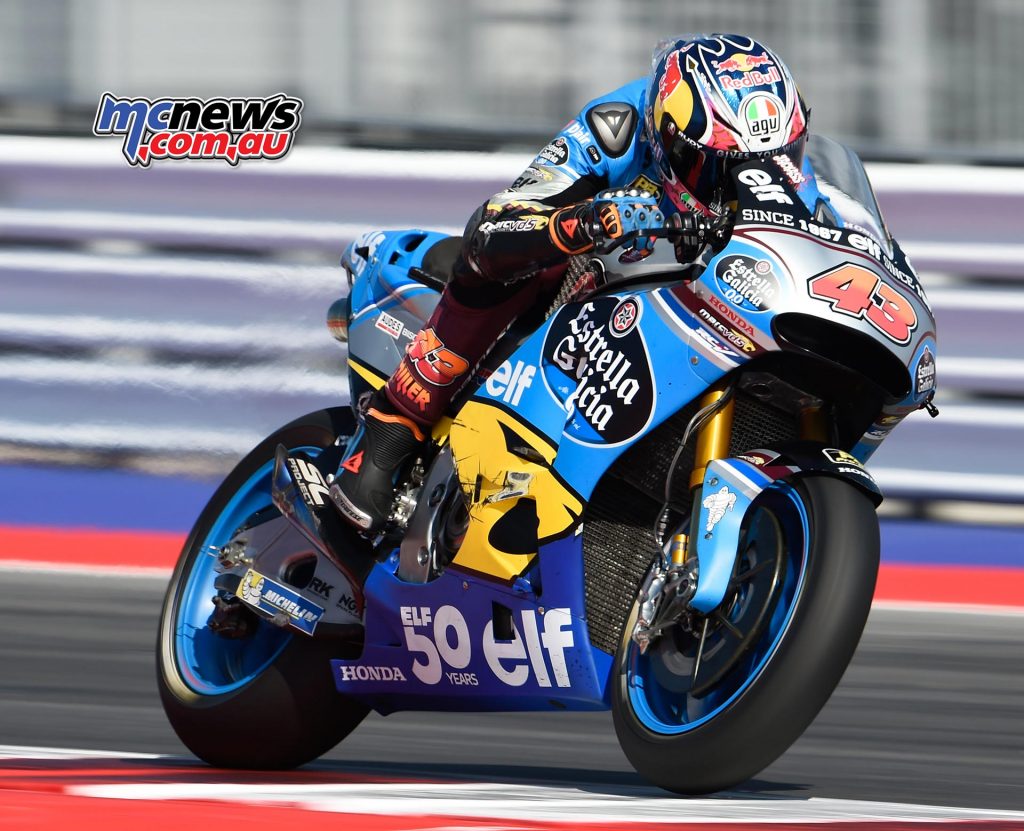 Now it’s race time. Will we see a re-run of 2017 and the number 26 slicing through the field? Can Marquez bounce back, Viñales go one better, Dovizioso make it three in a row? And the big question: will it be rain or shine on Sunday… 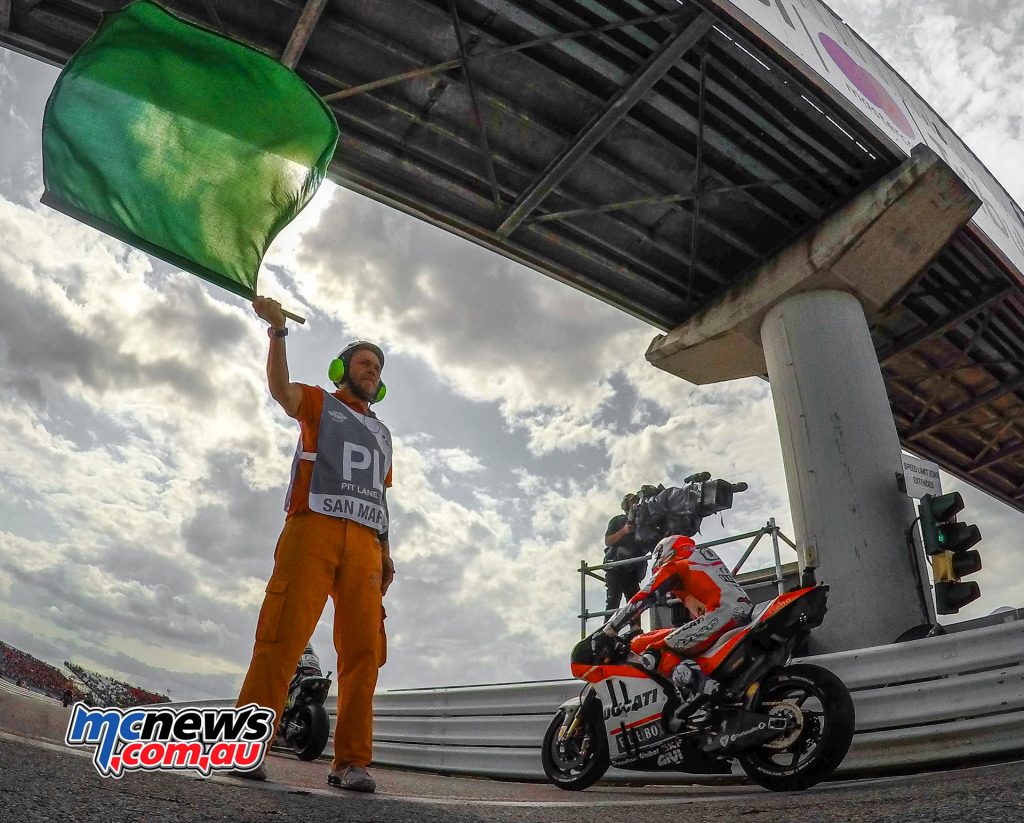 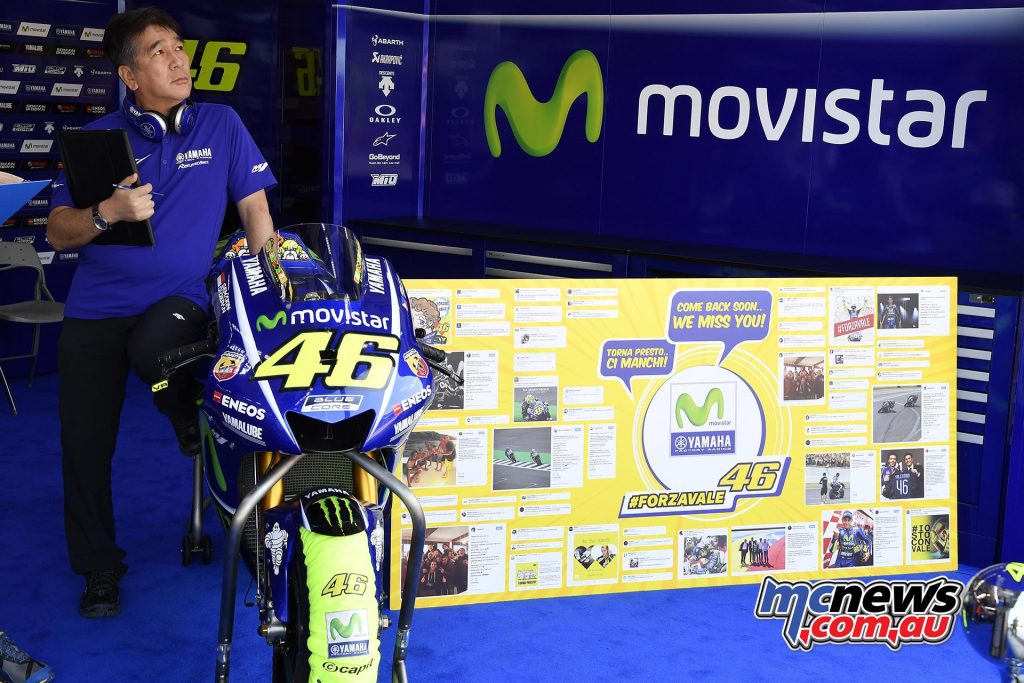 Mattia Pasini (Italtrans Racing Team) will start his second home race of the year from pole position, taking the honour for the fourth consecutive time and aiming to take his second home turf victory of the season on Sunday. The closest challenger was once again compatriot Franco Morbidelli (EG 0,0 Marc VDS), with the Championship leader only 0.083 seconds off. Dominique Aegerter (Kiefer Racing) took third after a weekend of good pace, back on the front row for the first time since Jerez. 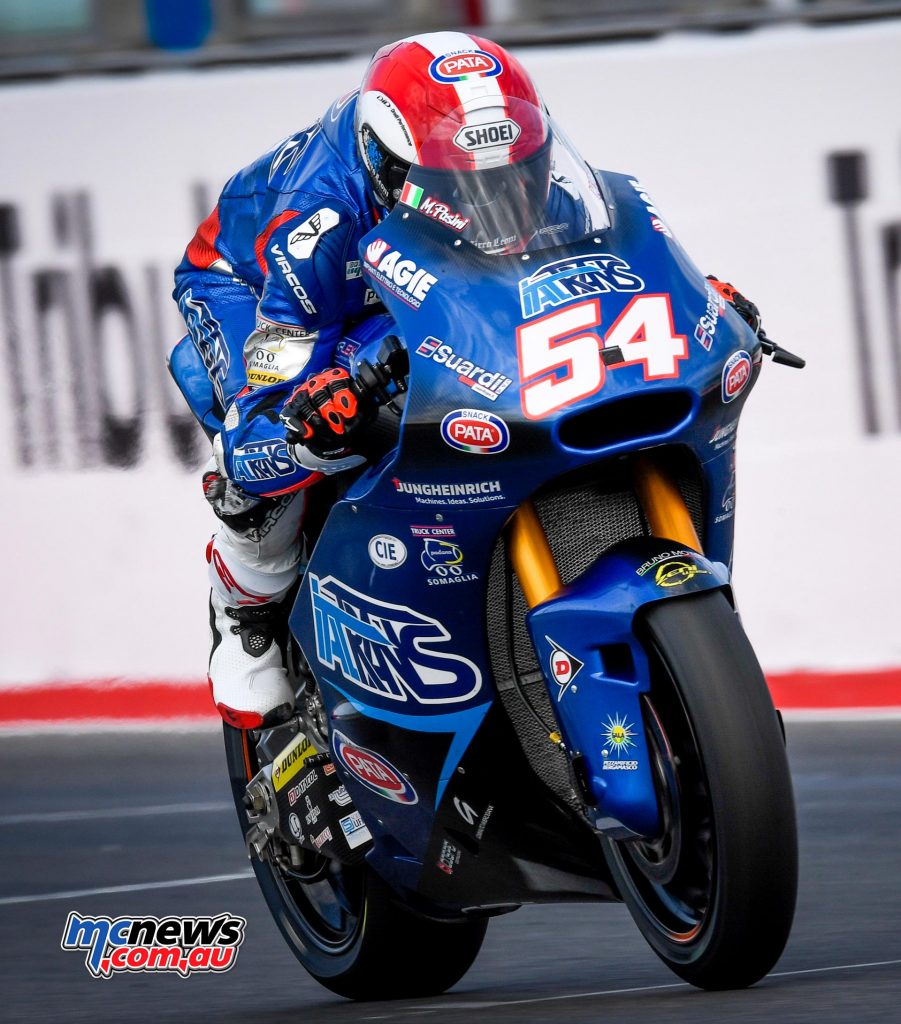 Key title challenger Tom Lüthi (CarXpert Interwetten) had a slightly muted session to take seventh, the key victim of Baldassarri’s late charge as he got bumped off the second row, and he will now line up just ahead of veteran Italian Simone Corsi (Speed Up Racing). Miguel Oliveira (Red Bull KTM Ajo), after a difficult FP3, completes the third row in ninth. Fabio Quartararo (Pons HP 40) takes tenth, after a weekend of good pace for the French rookie.

Luca Marini (Forward Racing Team) is P11, ahead of another rookie in the form of Jorge Navarro (Federal Oil Gresini Moto2). Sandro Cortese (Dynavolt Intact GP) made good use of qualifying to take thirteenth, with Hafizh Syahrin (Petronas Raceline Malaysia) and Xavi Vierge (Tech 3 Racing) forming the final part of the fastest fifteen.

Remy Gardner will begin from head of the eighth row and with wet weather expected tomorrow, the young Australian aims to take advantage of the conditions and close the weekend inside the points.

“In qualifying, I rode my best time of the weekend but it wasn’t enough and we are surprised by how fast the pace is, yet I certainly feel that this lap was one of the best that I could have done at the moment. For tomorrow, we still have some work to do but we definitely need to keep focusing on the setup in order to extract a bit more from the bike. Anyway, because of the speed of the other riders in qualifying, we will have to come prepared for race day. If it rains, then for sure, I feel that we will have a better chance, when you consider how we performed in the Czech Republic. I’ll keep my fingers crossed for wet conditions, but if it stays dry then I still think that we can have a decent time.” 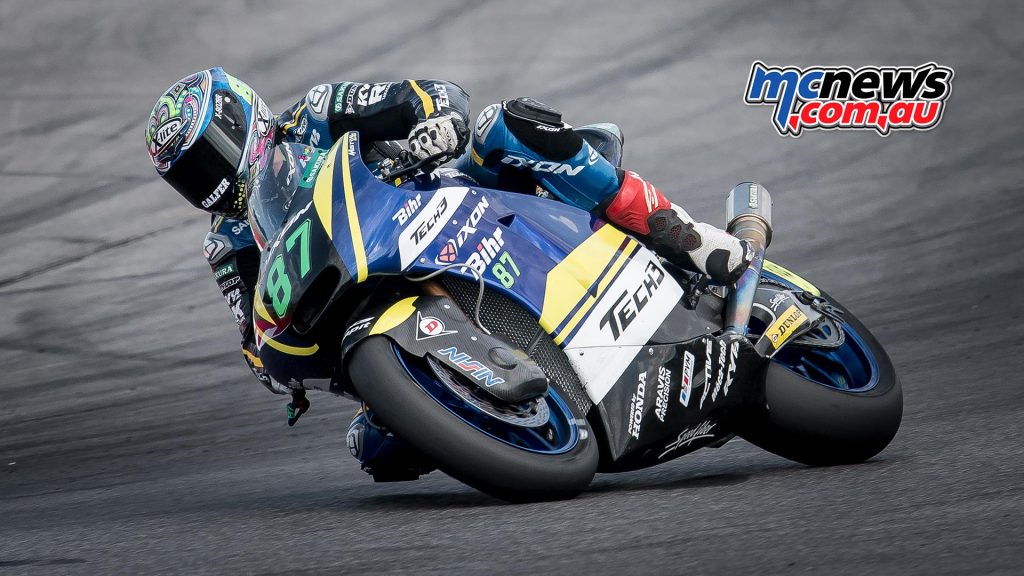 The ‘Beast’ is back! Enea Bastianini (Estrella Galicia 0,0) will start the Gran Premio Tribul Mastercard di San Marino e della Riviera di Rimini from pole position after a new lap record in qualifying – and a dramatic end to the session. An incident out the final corner on the final run saw Gabriel Rodrigo (RBA BOE Racing Team) lose control and his bike get collected by Livio Loi (Leopard Racing), creating a spectacular crash for the Belgian rider but with both riders soon up and on their feet. Behind that drama, Jorge Martin (Del Conca Gresini Moto3) just missed out on pole and starts from the middle of the front row, with Championship leader Joan Mir (Leopard Racing) taking third. 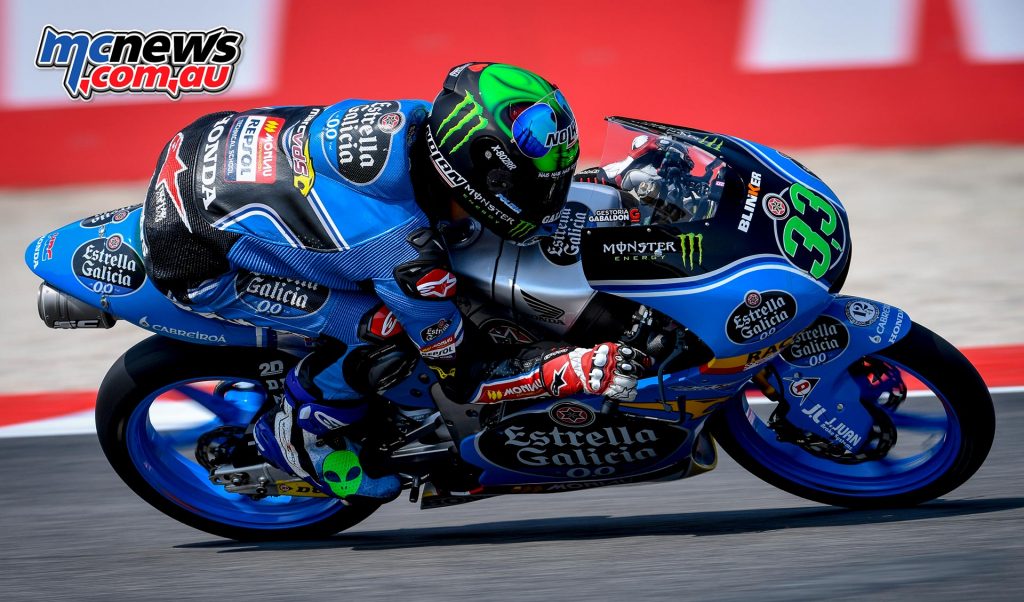 Fabio Di Giannantonio (Del Conca Gresini Moto3) was the first man to break Brad Binder’s former pole record, and the Italian heads up the second row after the dust settles on a frantic session. Just behind him is Romano Fenati (Marinelli Rivacold Snipers), with Rodrigo set to line up in sixth despite that late drama.

Ayumu Sasaki (SIC Racing Team) was the rookie superstar of the session to take seventh and break a run of more difficult qualifying results, ahead of home hero Niccolo Antonelli (Red Bull KTM Ajo), who has shown solid top ten form all weekend. Just behind Antonelli is teammate Bo Bendsneyder.

Nicolo Bulega (Sky Racing Team VR46) had a fast lap deleted for exceeding track limits and took tenth by the flag, ahead of Aron Canet (Estrella Galicia 0,0), who provided some earlier drama of his own. Canet highsided at Turn 15 part way through the session, but was able to get back out on track and take P11. Mugello winner Andrea Migno (Sky Racing Team VR46) rounds out Row 4.

The lightweight class get ready to race at 11:00 (GMT +2) at Misano on Sunday, with Bastianini looking to take his second win at the venue from pole. If he does that, he’ll be the first winner from P1 on the grid since Brad Binder took the win at Phillip Island last season.