Boris | Sepang MotoGP could have been scripted

It was a race that could well have been scripted. Of course it was not, but the way it panned out the championship is still alive and will be decided at the final round in Valencia.

It was a wet race – something the 2017 season seems to have thrown up with squelching regularity. Global warming is apparently having an impact on MotoGP – who knew? If this keeps up, and it probably will, look for riders who have highly-developed wet-weather riding abilities to figure strongly in future seasons.

Casual observers of MotoGP might have said it was a boring race, processional and lacking the high-speed cut-and-thrust served up the previous round at Phillip Island. MotoGP tragics like myself instead beheld a masterful display of chess with handlebars, as the two title contenders, Dovizioso and Marquez did their sums and their very, very best not to crash on the often-treacherous Malaysian bitumen.

Marquez is apparently not a fan of Sepang, and he didn’t shine in qualifying, ending up seventh on the grid while his team-mate, Dani Pedrosa, somehow jammed himself onto pole. Beside him sat the re-christened Joe-Han Zarco, and Dovi completed the front row.

Rossi had looked strong in practice and qualifying, and had secured fourth, ahead of his team-mate Vinales and his sworn enemy Jorge Lorenzo, who had never really sparkled at Sepang.

The holeshot was Marc’s, but only until he ran wide and allowed Zarco to hurtle into the lead, followed by a resurgent and very determined Lorenzo.

And so began the chess game.

Coming into Lap 6, Zarco led by more than a second. Behind him, Lorenzo kept Dovi at bay, and Marquez had been nudged back into fourth. 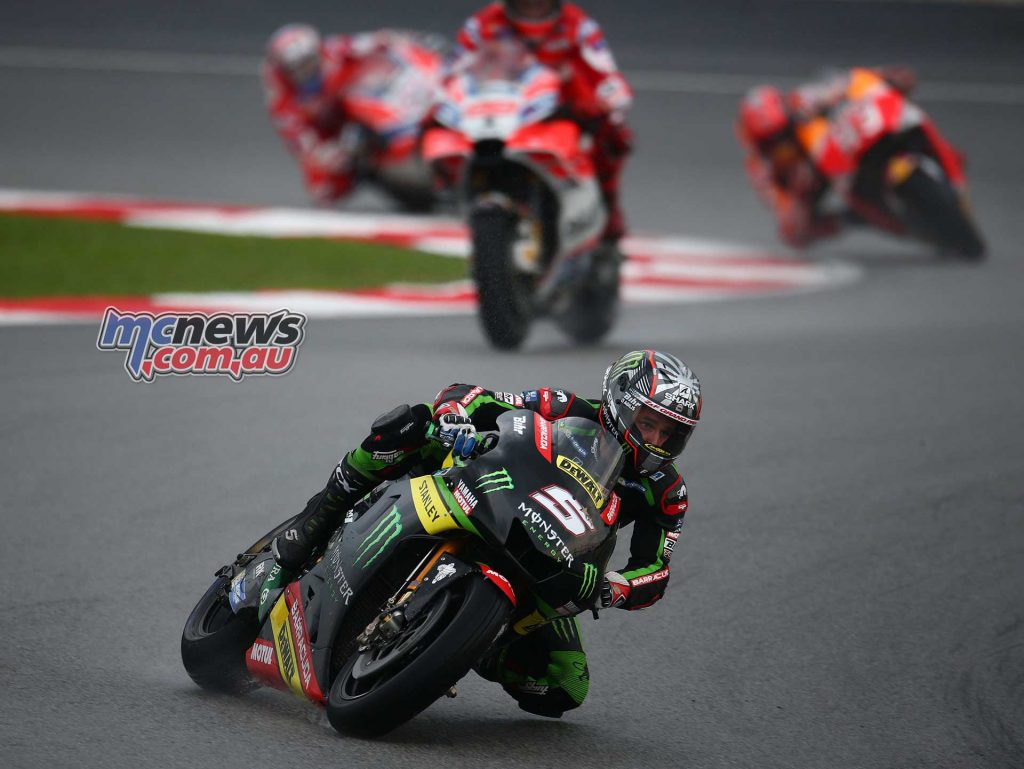 Rossi, who showed promise in practice and qualifying had been devoured in the opening corners and was flubbing about back in eighth after seeing what 11th looked like in the opening laps.

Zarco had chosen to go out on a soft-soft combination of wet tyres, and was the only rider of any consequence to do so. Michael Van Der Mark might also have picked soft-soft, but since his only job was not to destroy Folger’s bike, no-one really cared what hoops he was on.

Zarco’s tactic, or hope, was the track would dry out halfway through the race, just as the soft-soft tyres were going off, he would duck back into the pit, grab his slick-shod number two bike and sail onto the top step of the podium.

As it turned out, it didn’t really stop raining for the whole race, and actually began to rain harder a few laps from the end.

So Lorenzo caught Zarco, passed him and once again found himself in the lead.

Dovi hovered haplessly behind Jorge, never more than a second adrift, but never less than half-a-second, and while the team-mates swapped fastest laps for a few circuits, Dovi ever so slowly began to catch Jorge.

In a distant third place, Zarco was cursing his tyre choice and behind him, Marquez must have been trying to see which of the two factory Ducatis was leading. If Dovi won, then the championship would be decided at Valencia. If it was Lorenzo, then Marquez would be crowned World Champion at Sepang, and no-one would care Lorenzo had won his first race on a Ducati.

As the race edged towards the end, the commentators immediately began to speculate about team orders. Would Ducati order Lorenzo to let Dovi through and keep the championship alive? Would Lorenzo obey if he was told to do just that? After all, this was the Spartan’s big chance to shine and win his first race for his new team. He had declared earlier he would help Dovisoso win the championship if he could, but I’m convinced he didn’t mean he’d do that if he was actually winning the race. It’s one thing to promise to help your team-mate if you’re in third or fourth and you can get in the way of Marquez to Dovi’s benefit. It’s a whole other thing if you’re winning your first race and you have to let your team-mate through to keep the championship alive.

A message from his team did appear on Lorenzo’s dash a few laps from the end of the race, suggesting he try Map 8. Conspiracy theorists speculate this was the signal. He was to let Dovi through.

And so he did, but only because he ballsed it up on Turn 15 with five laps to go, leaving a centimetre of his red knee-slider painted on the track trying not to crash, and Dovi sailed past. No, Lorenzo did not let him past intentionally. It was just the notorious Turn 15 and the wet weather. For sure.

After that, it was just Jorge half-heartedly pursuing his team-mate to the line as Dovi kept his cool and his bike upright. He actually rode a masterful and very controlled race in quite difficult conditions. He also no doubt rues his performance at P.I., which cost him a lot of points and quite possibly the world title.

But as usual, the fat lady has not yet sung. Marquez might well win next week. But then again, he might not.

That’s just one of the reasons I love this sport so much.