Around the world with The Bear – Part 15

In Part 15 The Bear meets Skippy in Wales and makes the home run to the Guinness Brewery, before heading back to London to plan the next leg of his journey.

There was a little hut at the border selling Green Card insurance, so we finally weakened and bought some. Of course, no one asked for it when we crossed. Our camp that night was right on the lake at Lugano, comfortable and quiet, and a pleasant change from the previous night almost literally on the Autostrada.

I made one of my famous navigational mistakes the next morning. We had a choice between the St Bernhard tunnel and the St Gotthard pass, and I thought: “Who wants to spend such a lovely day underground?”

So up into the Alps we went, past the trucks cleaning the roadside gravel (it’s true! they do, in Switzerland) until it started to drizzle. With wet-weather gear on, we continued. The drizzle turned to snow, and we were still nowhere near the top. Instead of turning around like sensible people we pressed on and finally made the pass in the driving snow.

We were not exactly dressed for this kind of weather, and had even disposed of our visors some time before because they had become too scratched to be safe. Ice formed on our beards and my glasses. I have never been so cold in my life.

On top of all this, the Swiss have a charming habit of cutting parallel grooves in the road surface. No doubt this is useful in preventing cars from sliding all over the place in snow, but it imparts a weave to small motorcycles that is distinctly unsettling. Or would be if I had had any time spare from being cold to be unsettled. A welcome pub supplied coffee and brandy once we were below the snow line on the other side, and we continued to Zurich in the driving rain. What the hell, it was only rain…

The border with Germany was complicated. Our road first crossed to Germany, then back to Switzerland and then back to Germany again, all in the space of about 16km. It was lucky that we had bought Green Cards in Italy, because this time everybody wanted to see them. The Germans also pored over all the exotic stamps in our passports for a while and I thought they might decide to search us. But no, they’d just been curious.

It was the middle of September by now, and Germany was quite cold. We slept in our clothes that night and the next. On the second evening, we found a pub which looked convivial and asked if there was a campground within walking distance. Always get your priorities right.

“Yes,” said the bloke behind the bar. “But it is perhaps a dozen steps,” and pointed at the orchard next to the pub. “It is also free, but only,” and he lifted a finger, “if you drink here.”

Charlie discovered the uniquely German tradition of the Stammtisch when he attempted to sit at it. In most if not all country pubs, the Stammtisch is reserved for regulars – and off limits to everyone else. It was no big deal, but an interesting introduction to a country where rules are rules. Charlie also discovered that bakeries usually served coffee as well, something that has become common in Australia but wasn’t then. We both approved.

After a long day on the autobahn, we arrived in Brunswick and my aunt and uncle made us welcome. They fed us up for a few days and my aunt dropped our clothes into the washing machine. We couldn’t believe that it was actually possible to get the stuff clean again. At lunchtime, my aunt produced what she knew was one of my favourite sandwich toppings: raw pork with salt and minced onions. I have to give Charlie top marks here; he overcame a lifetime of Australian conditioning and tried it – and even liked it.

We visited more relatives in Luneburg and Hamburg and then rode over to Amersfoort in Holland to stay a night with Frank, the Harley rider we’d met in Penang. A marvellous evening followed, recounting woes and laughing about mishaps. All very easy to do afterwards.

After crossing Belgium in something like an hour, we turned down towards Paris. The autoroute is quite expensive, and you can’t get a glass of wine in the restaurants – in France of all places! Our friends in Paris, Campbell of BMW R60 fame and Renee, were away for the weekend. We camped at the big campsite in the Bois and had a look at the famous city. When they returned we moved over to their flat and spent a few days being deluged with French hospitality.

Campbell wanted to go over to London to buy a bike, so when the time came we offered him a lift. The bikes looked like overloaded camels as we transferred some of my load to Charlie and Campbell crouched behind me. We still made good time to Boulogne, through the rain, but then the hovercraft didn’t want us. No bikes allowed on Seaspeed.

We took the normal ferry and actually had a dry road from Dover to London. Just out of Dover we passed an elderly bearded man in a shalwar kameez. Campbell dug me in the ribs and shouted, “Now I know we’re in England, there’s an Englishman!”

I bought some new wet-weather gear and we took off again, into a headwind to Wales and the lovely hills above Swansea. Then Charlie’s throttle cable broke. We had a spare, so it didn’t matter, did it? But the spare turned out to be a return cable, which is not interchangeable with the actuating one. Only Honda design engineers know why.

Kevin and Skippy, a young Welsh couple, came to our assistance. Skippy got her name from the fact that she’d spent some time in Australia as a child. They showed me a bike shop where I secured a new cable and then invited us over to their place. We spent the evening in the weirdest pub I have ever seen, the walls covered in comic book characters, and enjoyed ourselves drinking a lethal beer called Colt 45.

Welsh roads were as much fun as Welsh people, and our enjoyment of the ride was only spoiled by mysterious headaches the next morning. The crossing from Fishguard was uneventful, except that they sprayed us with disinfectant when we rolled ashore in Rosslare. With both bikes running noticeably rough now, we spent a few days exploring the south of Ireland, especially enjoying the Ring of Kerry and a priceless bed-and-breakfast place in Portroe.

This was where we heard the wonderful story of the elderly couple, holidaying in Portroe, who had been kept awake long into the night by some of the local boys fanging about on their bikes. In the morning they went to the Garda, the police, and complained, “What do you think about people riding loud motorcycles around town all night?” The Garda looked at him for a while and then replied, “As long as it’s just the two of you I suppose it will be all right…”

Laden with gifts, we retired to our B&B and tried to come to terms with the fact that the trip, for now, was over. Just as well we were in Dublin. It’s hard to get depressed in a place with so many good pubs.

We both returned to England and settled in London for a while. Charlie worked as a despatch rider, possibly the only one with a PhD (then again, possibly not) and I met up with Annie and got a job first in an advertising agency and then a publishing firm. It was almost like normal life…

Uneasy lies the head that’s planning another bike ride; this time a rather different kind. Find out more next week. 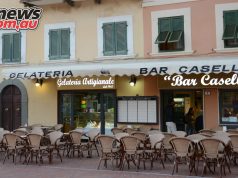 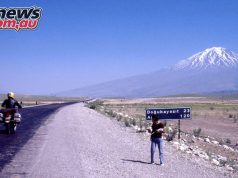