Ups and downs for Tech3 Moto2 team at Phillip Island

Tech3 Racing team’s Remy Gardner was well in the fight for the podium in front of his Australian home crowd, but couldn’t avoid a crash halfway through the race.

After a stunning start the local hero stormed from P15 to 11th position and was fighting through the pack, passing the championship leading duo and made his way towards the front until he reached P6.

Gardner was well placed and fighting for more, but didn’t get the chance to demonstrate his full potential. Remy’s fastest lap of the race was a 1m33.852, the sixth fastest time of any rider.

Meanwhile, Bryan Staring collected a lot of experiences during his first ever Moto2 race. The Australian, who jumped in for the injured Bo Bendsneyder this weekend, did a consistent 25 laps, trying to stick with the guys in front. With a strong effort he eventually ended up in 21st place. Bryan’s fastest lap of the race was a 1m35.964.

“It was a great disappointment, because for sure with Argentina this was Remy’s best ever race and I think it was even stronger than Argentina, because it was on full dry tarmac and he was there. He has been closing on the leading group and he was with them. He looked quite comfortable from what we could see on screen. He was passing quite a few guys in that group, big names, and we were just keeping our fingers crossed that things could stay like that until the end. Unfortunately, that was not the case. It’s a big disappointment, because it was a great show. We are not very often in this group. In UK we couldn’t race, where the podium was a possibility after the second place in Qualifying and here, there was a possibility of a podium for sure. It’s not happening very often to us that we find ourselves in a position, where we can dream of a podium and it was a possible dream. I’m very sorry about that and very sad, but on the other hand I want to thank Remy and the whole team. Remy and the bike, they are fast and we have to take that as a positive. I know it’s the end of the adventure with the Moto2 Honda engine, but still, it’s good to be there. For sure, I would also like to thank a lot Bryan Staring for what he did for us. He jumped in a plane from Perth, which is a long way from Melbourne, arrived here and started to work with us, which is a brand new world for him. To jump on a Moto2 machine without any test before is for sure a though mission, but I think he did really well. He didn’t do any mistake, although he was disappointed with himself, because when you see the position, you always expect better and this is a guy that is used to win or be on the podium, so it was not easy for him. But I think he did well and I would like to thank him a lot, because he’s been a lot better than what he thinks he’s been and I know it’s a difficult mission, so don’t be disappointed Bryan, you did a great job. We enjoyed having you with us, the whole team enjoyed working with you and hopefully we see you again one day. Now we have to pack for Malaysia and hope for better luck there.”

“A big thank you to the Tech3 team for having me during the weekend. It’s been a really enjoyable experience and very educational for me as well. I’m pretty disappointed with the race, to be honest, because I couldn’t get anything extra out of me. I lost contact with the group early and I wasn’t particularly comfortable with a full fuel tank in the early stages and I never really recovered from that. Anyway, overall, I learned a lot, I had fun and yet again, thank you to the team for having me.”

“Phillip Island was definitely one of the tracks, where our Mistral 610 was working really well. Unfortunately, it just didn’t pay off in the end. I just went into the corner normally and didn’t want to try anything, but Mir was breaking hard mid-corner, which I just didn’t expect, so I went off. I’m really disappointed, because I’m sure that I could have fought for the podium, which would have been amazing for my home race. I’m really sorry to all my fans here!” 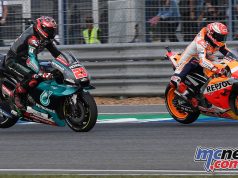 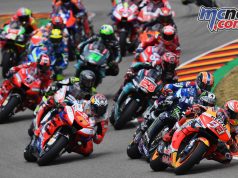 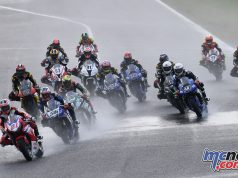