Vinales finds his mojo but it’s tight at the top

Maverick Viñales (Movistar Yamaha MotoGP) opened the #QatarTest on top of the timesheets, with last year’s victor at Losail putting in a 1:55.053 to narrowly beat Andrea Dovizioso (Ducati Team) to the top by less than half a tenth. Even closer than that, Andrea Iannone (Team Suzuki Ecstar) took third and was just 0.003 off Dovizioso ahead of him.

Action was a little sluggish to get in gear on Day 1 as some waited for conditions to become more similar to those that will prevail during the race weekend, but by the end of running the majority of the field had racked up half a century on the lapcounter. At this test, there are three choices of front and rear from Michelin, with the soft and medium front tyres the same as the allocation for the race last year and the harder front the one new for this season used at the Sepang and Thai tests. The rear allocation is the medium and hard from the race weekend at Losail in 2017, plus a new soft option to test.

That’s in addition to each individual agenda – with Qatar now proving final decision time ahead of lights out. For Viñales and the Movistar Yamaha MotoGP team, it’s important track time after the Iwata marque struggled at Buriram, with much to test. One thing that is defined for Yamaha, however, is aero – with electronics and grip issues the key focus. Back on top on Day 1, Spaniard Viñales put in 64 laps, with teammate Valentino Rossi not far behind on lap count or laptime. The ‘Doctor’’s best was a 1:55.432 to put him in P7, but with exactly the same fastest lap as Alex Rins (Team Suzuki Ecstar) ahead of him. Rossi was positive after Day 1, as was Viñales.

Rins was the fastest Suzuki machine at Buriram, but at Qatar, teammate Andrea Iannone turned the tables on Day 1. Iannone was third fastest and so close to Dovizioso ahead of him, with his best a 1:55.107 and Rins a couple of tenths further back. The ‘Maniac’ put in 58 laps, with Rins racking up 67 and a late mover up the timesheets. Team Manager Davide Brivio says the package for the Hamamatsu factory is largely now defined in terms of engine and chassis, with time now allocated to final confirmations – but mainly, it’s mission: race day as they get set up for the first Grand Prix of the year.

Meanwhile at Ducati, ‘DesmoDovi’ showed more of his hand on Day 1 as he blasted up the timesheets and was top Borgo Panigale machine. And teammate Jorge Lorenzo, who set the fastest ever lap at Sepang and then struggled in Thailand, shot back into contention on Thursday at Losail as he ended the day in P5; a 1:55.423 his best effort and around half a second off his own race lap record.

Johann Zarco (Monster Yamaha Tech 3) was the man who just beat Lorenzo to the top four, fastest Independent Team rider and once again a presence in the top echelons of the timesheets after going second fastest in Buriram. His new teammate Hafizh Syahrin also put in a good performance once more, going P22 and mixing it up with his fellow rookies. Of those, Takaaki Nakagami (LCR Honda Idemitsu) was the quickest once more – ending Day 1 in P14.

Nakagami’s teammate Cal Crutchlow (LCR Honda Castrol) was the fastest Honda overall on Day 1 as he took P9, with Repsol Honda Team’s Marc Marquez and Dani Pedrosa just 0.009 and 0.010 further back respectively as the three men lined up in a row on the timesheets. Marquez concentrated on electronics on Thursday and was positive, with teammate Dani Pedrosa making some different headlines with two tumbles, but rider ok.

Danilo Petrucci (Alma Pramac Racing) slotted into eighth on the first day as the top Independent Team Ducati rider, with teammate Jack Miller not quite as far up the timesheets so far in Qatar on Day 1, taking P12.

Alvaro Bautista (Angel Nieto Team) was only a tenth and a half of Miller in thirteenth, with Scott Redding (Aprilia Racing Team Gresini) completing the fastest fifteen just behind quickest rookie Nakagami. Redding was the fastest Aprilia as another who, like Iannone at Suzuki, turned the tables on his teammate on Day 1 – with fellow Noale machinery rider Aleix Espargaro two positions further back.

Red Bull KTM Factory Racing, meanwhile, were glad to have Pol Espargaro back in action alongside Bradley Smith, working on smaller updates to the chassis and engine, as well as defining their aero package. Espargaro ended the day in P19 but only just over 1.2 seconds off the top, with Smith for close company just behind – and both riders put a combined total of more than 100 laps on the counter for the Austrian factory as their progress keeps rolling on. Sadly, however, Espargaro will definitely be sitting out Friday’s track action as he continues his recovery. 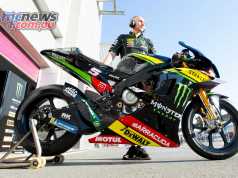 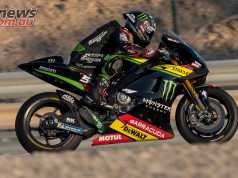 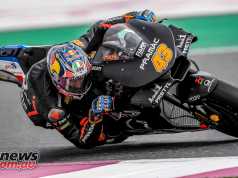