Jonathan Rea continued his domination in the Portimao WSBK test

While 12 WorldSBK riders took to the track for the Portimao Official Test, it would be Jonathan Rea (Kawasaki Racing Team) who ended the day on top, 0.398s ahead of the rest of the field, with the Ducati duo of Davies and Melandri the next closest riders on the final timing sheet.

An overcast day greeted the WorldSBK riders in Portimao, and testing was underway at 9am local time before the red flags were waved following a technical problem for Lorenzo Savadori (Milwaukee Aprilia) at turn nine in the opening half hour. Once the track was clear, riders were back on track with Althea BMW Racing Team welcoming Michele Fabrizio as their test rider and Davide Giugliano (Red Bull Honda World Superbike Team) swung his leg over the Honda once again.

“It’s been a very busy day for us because, unlike in our original plans, I was obviously the only one on hand for the team for this test. I have raced here before but never with the Fireblade, so I had to spend the first part of the test getting used to riding this bike around the circuit and checking that everything was working well. We then tried several things – mostly with electronics – with some interesting results. It’s good to be back on the bike and this has definitely been a good way to get ready for Magny-Cours.”

Kawasaki Racing Team were present with only one rider following Tom Sykes’ crash on Saturday, and Rea spent the day working on some chassis set up as well as beginning work on the 2018 ZX-10RR. However this is still a work in progress, and the reigning champion is keen to keep his mind on the next three races – especially as he is yet to win at Jerez and Qatar in WorldSBK. His lap time of 1.42.313 after 53 laps put him up on top at the end of the day.

“It is always useful testing after a race weekend because you have a good rhythm. So we did not rush into too much today. We started with the bike set-up how we finished the race and then we started work on set up ideas, namely trying to optimise our chassis balance. We know the chassis next year is going to be very important for us. Showa brought some good test items and I found some positive things. I then did some Pirelli tyre tests at the end, based on a tyre that was here on the weekend. I did not so many laps today but I also spent a little bit of time on track with Toprak, trying to help him round, which was enjoyable. He got up to speed really fast so it is clear that the base package of the Ninja ZX-10RR is really good.”

Chaz Davies (Aruba.it Racing – Ducati) had a solid day in Portugal, finishing in second position on the timing screens after a tough weekend. Working on electronics and set up for the remainder of the season, they were also working with some set-up surrounding the Pirelli tyres. His team-mate Marco Melandri (Aruba.it Racing – Ducati) was in the top three, 0.704s off Rea’s time, which keeps in line with his consistent pace so far in 2017.

“It was an important test, we zeroed in on what works on this track. We’ve been playing around, going in and out a lot, trying different configurations. We tried a new development rear tyre, but we were cut short by the rain. It would have been nice to get a longer run, but the first sensations were good. We also had a couple of new things to evaluate, which had some positives and negatives, and I think we got a better grasp of where we’re at. We’ll keep what’s positive and bring it to Magny Cours, where we’ll try to take home as many points as possible.” 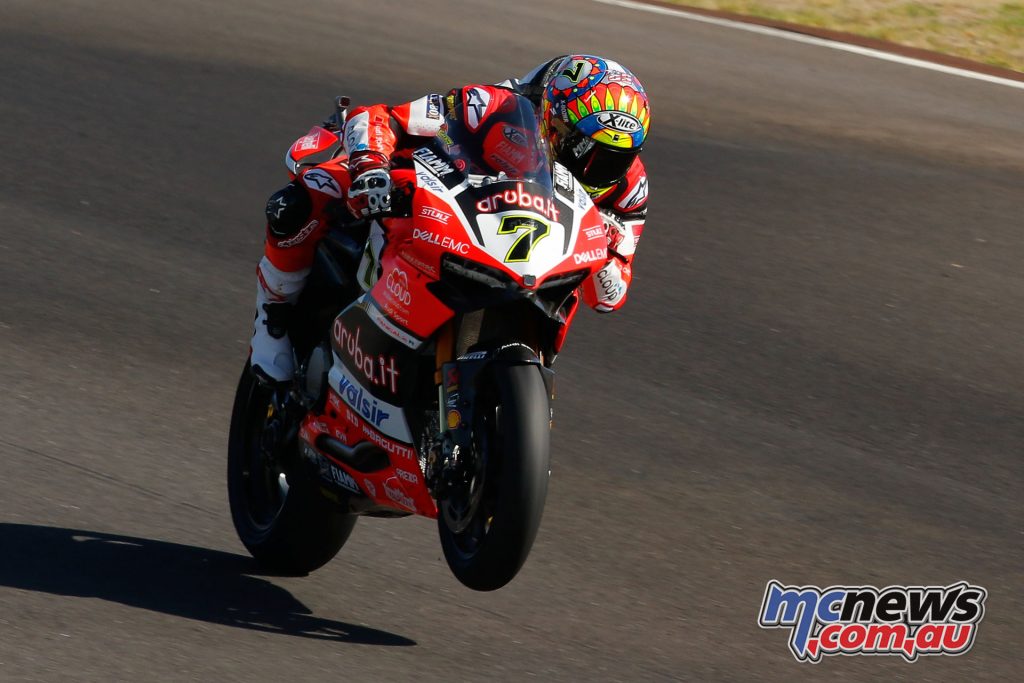 “It’s been a long and positive day. We explored new setups, working a lot with the electronics and weight distribution, and collecting important data. We also tried a new development rear tyre, with good feedback, but the rain didn’t allow us to do many laps with it and we couldn’t go for one final time attack. I think we’re heading in the right direction. With each day, we improve our knowledge of the package, and I hope this will help us to anticipate potential issues from now until the end of the season. We’ll go to Many Cours with more experience, and I can’t wait to see if we can make further improvements. The team has done a great job as usual, now we’ll take a short break to recharge ahead of the next battle.”

European Superstock 1000 rider Toprak Razgatlioglu was out on track on the Kawasaki Puccetti Racing bike in Portugal, and impressed many riders throughout the day. Finishing in the top four, with a lap time of 1.43.429, he was able to get some good mileage out of the ZX-10RR and received praise from Rea.

Circuit ambassador Eugene Laverty (Milwaukee Aprilia) put in the most laps out on track following his most successful weekend since his return to the series. Finishing in fifth position with a lap time of 1.43.257, the Irishman and his team were working on the consistent issue they have with grip. Looking at race pace with used tyres as well as some electronic set-ups, alongside his Italian team-mate Savadori – who finished in eighth – they were also covering some 2018 parts.

Pata Yamaha Official WorldSBK Team-mates Michael van der Mark and Alex Lowes ended the day in sixth and seventh position as the team focused on testing parts of the bike that they are unable to over a race weekend.

“Today we tried many things on the bike and I was quite fast from the start. I was faster than yesterday which is always good, we tried lots of different settings on the R1 and I did a lot of laps. I felt really happy on the bike! We also had some tyres to test for Pirelli, which had some positives and some negatives, but anyway, I am quite happy with the test today and I really look forward to Magny-Cours!” 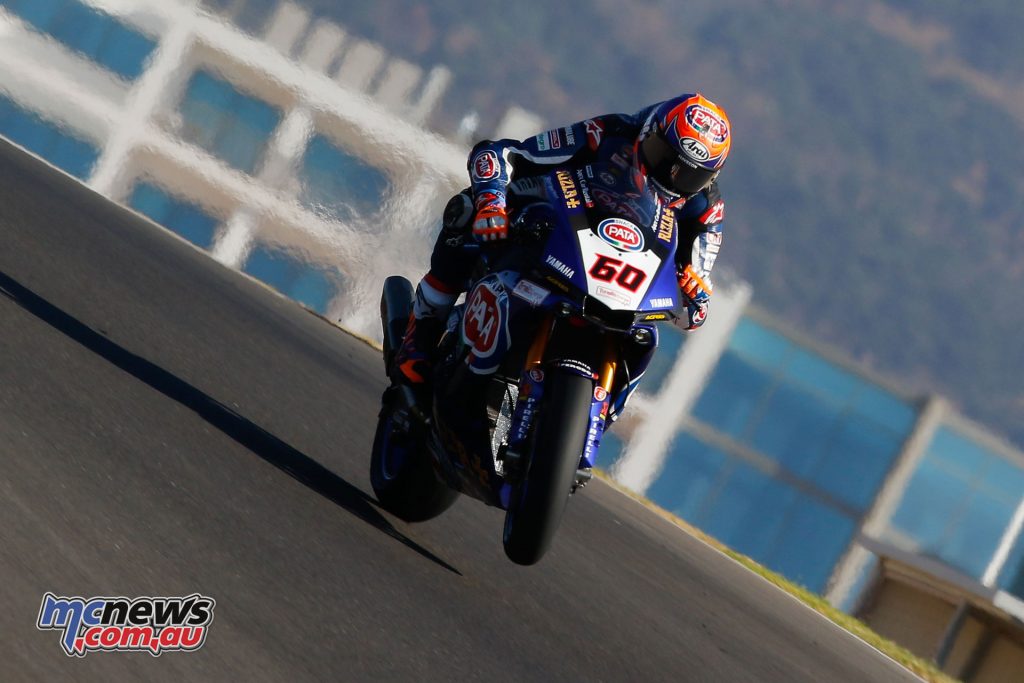 “It was a good test! Obviously, it was quite a difficult weekend for me but we managed to get quite a few laps in today. We tried a couple of things, although clearly, I couldn’t do too much as I was a bit stiff from yesterday. I am looking forward to Magny-Cours now, where hopefully we can have a better weekend.”

Jordi Torres (Althea BMW Racing Team) suffered a crash at turn nine which caused the session to be red flagged, which was caused by an issue with electronics. He suffered some slight pain but was able to continue throughout the day as he focused on the different Pirelli compounds on offer. Ending in the top ten, Torres’ best lap time was 1’43.602.

“This morning we started working on the the tyre testing schedule. Unfortunately I had a small crash at turn 9 though – I didn’t hurt myself but there was some damage to the bike. So I continued with the second bike, testing the tyres and providing our feedback to the Pirelli technicians. We also worked with a different swing-arm, but unfortunately it came on to rain so we didn’t have time to really test it fully. The day hasn’t gone badly, and luckily I came out of the crash unscathed.”

“It’s been a great day, being back on track together with some of my former Superbike rivals after a few years away. I don’t have much mileage under my belt of course but it’s been fun and I thank Genesio for the opportunity. We’ve worked well I think. I’ve done my best to do what I was asked, providing my feedback to the team, info that I hope can be useful to them as they move forward…”

Championship Standings after Portimao, Round 10