by Trev
in Enduro / Rally, Motorcycle Racing
A A
Share on FacebookShare on TwitterShare

After an exciting weekend of racing, Day Two brings the opening round of the 2012 Maxxis FIM Enduro World Championship to a close in Chile. In what turned out to be an unpredictable race, the series witnessed some closely fought racing as riders battled for victory under the hot Chilean sun in Talca. 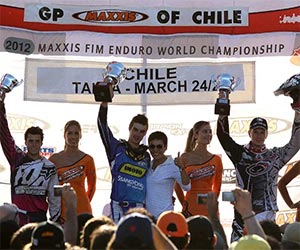 With another hard day of enduro to contend with, KTM’s Antoine MEO (F) secured his second victory in Enduro 1. Pierre-Alexandre RENET (F – Husaberg) was the winner of Enduro 2 while Christophe NAMBOTIN (F – KTM) won in Enduro 3. Mathias BELLINO (F – Husaberg) also claimed victory in the Enduro Junior class, marking a French clean sweep of the top step of the podium in each of the four premier classes.

Husaberg’s Pierre-Alexandre RENET (F) put the disappointment of Day One behind him to claim an incredible victory in Enduro 2. Finishing the first Cross Test of the morning only two seconds behind the previous day’s winner Juha SALMINEN (FI – Husqvarna), RENET was clearly focused on putting in a winning performance. Winning all but the final Enduro Test, the Frenchman secured a well-deserved victory.

“Today was a much improved result over yesterday,” remarked RENET. “Yesterday I made too many mistakes but today I was able to ride strong and fast to get the win. It’s been a great end to a tough weekend’s racing.”

Chasing RENET home for second, Spain’s Ivan CERVANTES (Gas Gas) finished as runner up in the GP of Chile. Recording consistently fast special test times throughout the day, the Spaniard then set the fastest time on the final Enduro Test to finish as runner-up, 25 seconds behind Renet. A victim of numerous crashes during Day One in Chile, Italy’s Alex SALVINI (Husqvarna) recovered strongly to claim his first podium result of the year. Competing in only his second season of enduro, the 2011 Rookie of the Year ends his GP of Chile in high spirits.
Cristobal GUERRERO (E – KTM) once again rode well with another fourth place result. Looking to add another win to his tally, Day One winner, Juha SALMINEN was unable to repeat his victory and settled for fifth on the day. Completing the top six was Italy’s Oscar BALLETTI (Beta).

Yet again it was the two-time world champion Antoine MEO that led the way in Enduro 1 in Chile. Starting the morning’s opening Cross Test in top form, the Frenchman quickly set about establishing himself at the front of the field by posting the fastest special test time. Losing out on the slow and technical Enduro Test, MEO once again found his stride by the middle of the day and upped his pace to set the fastest times in the five remaining special tests. Claiming a 30-second victory over Simone ALBERGONI (I – HM Honda) in second, MEO leaves Chile with a maximum points haul.

“This has been a dream set to the championship,” confirmed a delighted MEO. “My times were good all day and I was able to push hard for the win. Hopefully I can continue these results next weekend in Argentina.”

After a disappointing tenth on Day One, HM Honda’s Albergoni delivered a flawless performance on Day Two to place second behind MEO. Performing at his best on the Enduro Test, the Italian finished 21 seconds in front of his teammate Rodrig THAIN (F – HM Honda). Following his second place result on Day One, France’s THAIN capped off an impressive weekend in Chile by earning another podium result for the HM Honda team with third on Day Two.

Behind THAIN the current Enduro Junior world champion Jeremy JOLY (F – Yamaha) made an excellent start to his season with a fourth place result. Improving on his previous day’s result, Finland’s Matti SEISTOLA (Husqvarna) finished fifth. Marc BOURGEOIS (F – Yamaha) was unable to repeat his podium result from Day One and he ended his day in sixth.

Christophe NAMBOTIN (F –KTM) continued his winning ways in Chile to record another dominant victory in Enduro 3. Fastest in all but two of the day’s eight timed special tests NAMBOTIN’S only mistakes of the day came when he crashed in the final two Cross Tests. However having built up a comfortable advantage over second place rider David KNIGHT (GB – KTM), the Frenchman still claimed a 38-second victory.

“I knew coming into Chile that if I wanted to fight for the title then I needed to win here,” said a pleased NAMBOTIN. “I’ve never won the opening round of the championship before so to come away with two victories is the best start that I could have hoped for. Hopefully I can continue to be this strong next weekend in Argentina.”
Improving on his Day One result of fourth, British rider David KNIGHT (KTM) fought back in style to finish as runner up to NAMBOTIN. Finding conditions more to his liking the KTM rider was able to maintain second position throughout the day to finish in front of TM Racing’s Aigar LEOK (EST). Continuing on from his second place finish on Day One, the former GP motocross rider is proving to be a strong contender in Enduro 3. Finishing third on Day Two, LEOK was the surprise performer in the GP of Chile.
Husaberg’s Joakim LJUNGGREN (S) just missed out on a podium result to finish in fourth, less than three seconds behind LEOK. Unable to match his podium finish on Day One, Spain’s Oriol MENA (Husaberg) ended his GP of Chile in fifth. Marko TARKKALA (FI – Beta) rounded out the top six.

Mathias BELLINO (F – Husaberg) was once again the top performer in Enduro Junior. Winning all but two of the day’s special test he finished over one-minute clear of second placed Victor GUERRERO (E – KTM). As runner-up to BELLINO on Day Two, GUERRERO ended his weekend in Chile on a high note. Behind the leading two, British rider Danny MCCANNEY (Gas Gas) continued to impress in the dry and dusty conditions of Chile with third.
Italy’s Giacomo REDONDI (KTM) claimed a convincing victory in the 125 Youth Cup. Chile’s Benjamin HERRERA (TM) finished in second while Santiago ISAZA (Col – KTM) was third.

The Maxxis FIM Enduro World Championship continues with the GP of Argentina in San Juan on March 31/April 1.

While Meo, Salminen, Nambotin and Bellino recorded the best start possible to their championship season, there were many other surprise results throughout the action packed Grand Prix Maxxis of Chile. TM’s Aigar LEOK (EST) and Husaberg’s Oriol MENA (E) recorded their first Enduro 3 podiums of the new season. Oscar BALLETTI (I – Beta) and Marc BOURGEOIS (F – Yamaha) also had much to smile about by finishing third in Enduro 2 and Enduro 1 classes respectively.

Getting his day off to a strong start MEO posted the third fastest time on the first Cross Test. After a small crash during the Extreme Test, the hard charging Frenchman quickly gained control of his class. Setting the fastest time on the technical Enduro Test, the two-time EWC champion then topped the remaining five special tests to claim an 81-second victory over HM Honda’s RODRIG THAIN (F). “Winning this race is a dream result for me,” confirmed MEO. “I was sick during the week and didn’t expect this. I’m delighted to get a win so soon in this championship.”

Fastest during the early morning tests THAIN struggled to maintain that pace for the remainder of the day and after a late battle with MARC BOURGEOIS (F – YAMAHA) he narrowly held on to the runner up position. Finishing less than one tenth of a second behind THAIN, BOURGEOIS was one of the surprise results from Day One at the GP of Chile.

Behind the top three, Lorenzo SANTOLINO (E) made a successful debut on his Husqvarna to finish in fourth while Eero REMES (SF – KTM) completed the top five with Matti SEISTOLA (SF – Husqvarna) in sixth.

Juha SALMINEN got his 2012 season of to a perfect start in Chile by winning the highly competitive Enduro 2 class. After finishing sixth in the Friday Super Test, the Finnish rider quickly began to set some impressive times during the special tests. Maintaining a consistently fast pace throughout the day, SALMINEN ended Day One at the GP of Chile 18 seconds clear of Ivan CERVANTES (E – Gas Gas), who placed second. “This is the best start to the season that I could have hoped for,” confirmed SALMINEN. “I just tried to ride smooth and consistent today without any major mistakes and thankfully I was able to win.”

With CERVANTES chasing SALMINEN home for second, Oscar BALLETTI (I – Beta) found the difficult conditions to his liking to finish in third. Sitting outside the top five after the first four tests, a fastest time during the tough Enduro Test helped to lift him onto the podium.

In Enduro 3, NAMBOTIN made a dominant start to his championship campaign by securing the victory on Day One. Setting the fastest times in the Enduro 3 class during the day’s first five special tests, the Frenchman opened up a commanding lead to end the day almost 50 seconds in front. “I couldn’t have asked for a better day,” remarked NAMBOTIN. “My day started perfectly and I was able to open up a comfortable lead. Hopefully tomorrow will be just as good.”

Finding it hard to get to grips with the dry and dusty terrain, Britain’s David KNIGHT (KTM) made the best of a bad day to finish in fourth finishing less than four seconds adrift of LEOK. Husaberg’s Joakim LJUNGGREN (S) was fifth with Benoit FORTUNATO (F – Gas Gas) having a strong ride to finish in sixth.

Mathias BELLINO proved to be the clear winner of the Enduro Junior class with a commanding 76-second victory. Leading the way from the opening special test of the morning, the Frenchman easily secured his first win of the season. Behind him Gas Gas rider Danny MCCANNEY (GB) finished an impressive second in the dusty conditions not normally known to suit British riders. Completing the top three was Alexandre QUEYREYRE (F – Yamaha).