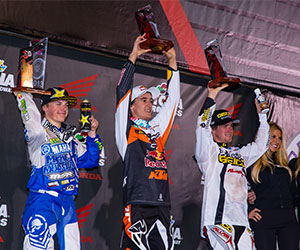 “Daytona is a unique place to race,” Villopoto said. “To win it is pretty awesome. It’s not like any other racing. If you can get a win here, it shows you are definitely one of the best. Sometimes it doesn’t go as planned but I’ll take it. It feels really good.”

Villopoto’s fifth AMA Supercross win of the year puts him atop the championship standings with a two-point lead over Suzuki’s Davi Millsaps, who finished 10th.

“It’s not much but it’s at least leading,” Villopoto said. “There’s still a lot of racing left and we have to keep focused and keep pushing forward.”

Rounding out the 450 class podium was KTM’s Ryan Dungey and Honda’s Justin Barcia. 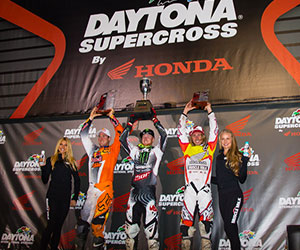 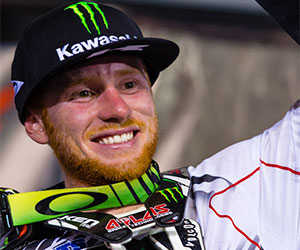 “I tried to close that gap as much as I could each lap but he was riding a good race,” Dungey said of Villopoto.

“In the 250 class it was always pretty hard but this was definitely tough,” said Barcia about his first 450 class race at Daytona. “It felt like an outdoor race. I rode the best I could and had a lot of fun.”

Frenchman Marvin Musquin aboard the No. 25 Red Bull KTM captured the 250 main event in dominating fashion. Musquin took the hole shot and led all 15 laps for a margin of victory of 8.072 seconds.

“I just stayed really calm and tried to have fun,” said Musquin, who captured his first 250 class win on his 15h career start. “I was pulling away from them every lap and I was having so much fun playing with the track. I don’t want to say it was easy but I had so much fun.”

Rounding out the podium was Will Hahn on the No. 19 GEICO Honda and Jeremy Martin riding the No. 77 Yamaha.

Carmichael retired from Supercross in 2007 as the most decorated rider in history with 15 AMA championships and 150 wins.

The Ricky Carmichael Signature Design Course was designed nearly identical to last year’s layout and the placement of the starting gate remained on pit road providing fans with a great view of the first turn. 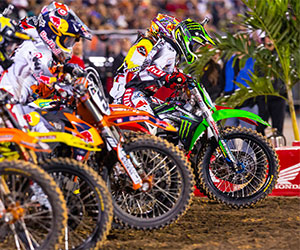 TwoTwo Motorsports Chad Reed has finished fifth in tonights action-packed Monster Energy Supercross at Daytona International Speedway.
The Australian set the fastest lap time in qualifying, but a first lap clash in his heat race, left Reed at the back of the pack. Impressively the TwoTwo Motorsports rider came through from dead last to finish the heat race fifth.

Reed got a good start in the 20-lap 450 SX ‘Main Event’ and quickly worked his way into the top five, a mistake on Lap 9 saw him go down and drop two spots.

As the ruts deepened, the Daytona track claimed a number of seasoned scalps, but the crowd were treated to the Reed of old, as he stormed past James Stewart, Ken Roczen and fellow Honda rider Trey Canard over the closing laps of the race.
“On paper that was not the result I was hoping for but there were still plenty of positives,” Reed said. “The bike was fast and it felt good to be able to get back up, race hard and move up through the order in both my heat and the main.

“It was crazy out there, the track was gnarly and the ruts just got deeper, every lap there was someone off.

“I felt good tonight and I was competitive, we will take a lot out of tongiht,” Reed added.

The next event will see the Monster Energy Supercross head to Indianapolis Lucas Oil Stadium on Saturday 16th March.

Red Bull KTM Factory riders Marvin Musquin and Ryan Dungey delivered great results in the SX 250 and 450 classes at the Daytona Raceway on Saturday night. Frenchman Musquin took his first 250SX Supercross career win at the fourth round of the East Coast Championship while Dungey was second on the 450 class podium in the tenth round.

The team’s German rider Ken Roczen also had an impressive night out finishing seventh on the 350 SX-F in the 450 class. He is currently on the break from the West Coast competition where he leads the points.

Musquin was placed in heat number one where he got off to a third place start as the riders rounded the first corner. He made a pass on Vince Friese for second place on lap two of the heat and held his position easily transfer to the main event.

When the gate dropped for the main event, Musquin put his KTM 250 SX-F up front early, grabbed the holeshot to lead the first lap before concentrating on stretching his lead. He went on to lead throughout the 15-lap main event to claim his first 250SX career win. Musquin crossed the line eight seconds ahead of his competition even after celebrating with a fun heel-clicker.

“Obviously I had a lot of fun riding this track,” commented Musquin after the race. “I knew everyone was going to be fast so I stayed calm out front and tried to have fun. I am so happy to get this win and to also gain more confidence knowing that I was pulling away from them each lap.” Musquin’s win at Daytona moves him up one position in the overall point standings to third overall.

Dungey and Roczen were placed in heat number one. Both riders got off to great starts with Roczen sitting in third position while Dungey was two spots back in fifth. Roczen rode strong on the first two laps to catch the second place ride of Broc Tickle. He made the pass for second at the end of lap two and set his focus on the lead KTM ride of Andrew Short. Roczen battled with Short for the next two laps before he found a line around Short and made a pass for the lead. Roczen then led the next three laps holding off a hard-charging James Stewart and his Red Bull KTM teammate, who had moved into third. Roczen then made a mistake entering the whoop section in the final lap allowing Swewart to slip past but his second place in qualifying was impressive, in front of Dungey in third.

When the gate dropped for the main event, Dungey moved up from his fifth place start to second place on the KTM 450 SX-F before the halfway mark of the race. He continued to turn impressive times throughout the main event to earn a podium finish and secure important points toward the championship hunt. Meanwhile Roczen launched off the gate to a second place start. As the riders neared the end of the first lap, he inherited the lead after Ryan Villopoto went off course. The German teenager held the lead for two more laps before Villopoto moved back into the front spot. Roczen fought hard for a top position but he succumbed to arm pump and went on to finish seventh overall.

“It’s pretty rough track tonight,” commented Dungey. “Luckily, we got my suspension dialed in after practice and my bike worked really well. I got off to a great start and was able to put myself in a good position early on. It feels great to get back up on the podium.”