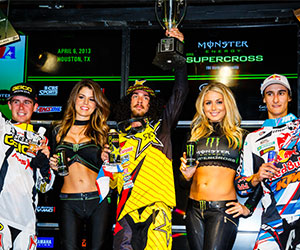 Villopoto gained the lead on the opening lap, and after five laps, Canard, Red Bull KTM’s Ryan Dungey and Yoshimura Suzuki’s James Stewart held down the second, third and fourth positions. Dungey passed Canard for second place on Lap 7, and on the same lap, Stewart took over third place.

While challenging Dungey for second place, Stewart crashed on Lap 10 before the finish-line jump. Dungey finished second and Canard third in his first race back since an injury sidelined him for a race.

Tonight’s race marked Villopoto’s second-consecutive win at Reliant Stadium and he extended his points lead to 21.

“It was tough out there tonight,” said Villopoto. “The track was breaking down out there, and there were several variables that we had to deal with. You had to move quickly out there tonight, and that is what I did in the early part of the race. I wanted to establish a lead before the lapped riders would begin to play a f 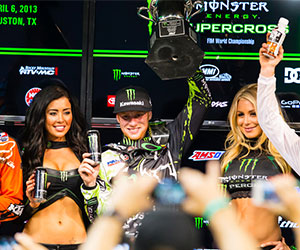 actor in the race.”

Zack Freeberg opened the Eastern Regional 250SX Class Main Event with the Nuclear Cowboyz Holeshot Award but was quickly passed by Wharton and Red Bull KTM’s Marvin Musquin, the winner of the last three races. Musquin made a move around Wharton on the opening lap.

On Lap 1, Wharton answered back, passing Musquin for the lead. Musquin ran into bad luck when he crashed on Lap 5 and lost several places. GIECO Honda’s Wil Hahn, who came into tonight’s race as the points leader, took over the number-two position and gave chase to Wharton but several mistakes kept him making the pass. Hahn finished second and extended his points lead to eight with two races remaining.

“It’s important to be aggressive out there,” said Wharton. “I had a great start and it was pretty intense during get first few laps, but I was able to give myself a nice cushion until Wil [Hahn] pressured me at the end.”

After re-entering the race, Musquin worked his way through the field, eventually securing third place, where he finished.

Red Bull KTM Factory riders Ryan Dungey and Marvin Musquin picked up valuable championship points in the 450SX Supercross and 250SX classes at the FIM championship on Saturday night in Houston’s Reliant Stadium to finish second and third in their respective main events.

The solid result in the 450s allowed Dungey to close the points gap to David Millsap’s second to just four points while Musquin consolidated in second place with an eight-point gap to the leader Wil Hahn and only two rounds to go in the East Coast series of his division.

Dungey was placed in the second 450SX Supercross heat where he had the first gate pick. He had a good jump out of the gate but was pinched off in the first corner and came around mid-pack. In the second corner, he came together with Andrew Short but managed to pull off a good save as they accelerated out of the corner. He then settled down to quickly pick off riders and was seventh by the third lap when the race was red flagged due to a rider injury.

The race restarted in staggered format and Dungey quickly reeled in the two riders in front of him to move into fifth. Two laps later he caught KTM rider Matt Goerke and moved into fourth where he finished the heat.

Dungey fifth at the first corner of the main event then made a few passes early in the race to move into third behind Trey Canard. He had reeled him in by the half way mark and slipped by on the inside to take second place. He then made up some time on leader Ryan Villipoto but was unable to get close enough to challenge for the win, eventually settling for second at the flag.

“I definitely needed a better start tonight. We are all so close in lap times that if you don’t get the best start, the leaders pull away quickly. I was able to get into second place but didn’t leave myself enough time to catch Ryan (Villopoto). Overall, I am happy to be on the podium and very happy with my bike and hope to continue to improve at the next round,” commented Dungey.

Hard fought third for Musquin in 250s
Meanwhile Marvin Musquin rebounded from a crash early in the main race at the seventh round of the East 250SX Supercross Series but now has to commit to a top finish in the remaining two rounds if he is to take the overall win.

The French rider was the fastest qualifier in practice and went into the second 250SX Supercross heat where he had first gate pick. This prime gate choice paid off as he pulled the holeshot and led the way around the first corner to jump into an early lead. He held on for the remaining six laps to take the win and a great gate pick for the main event.

Musquin got a good start in the main event and he and Blake Wharton quickly moved around the early leader to move into the top positions. The two riders began an aggressive battle for the next five laps before Musquin made a big mistake coming out of the whoop section where he clipped the tuff blocks rounding the corner and crashed. He scrambled back into the race but spent the rest of the race trying to reel in the leaders. He had moved into third in lap 15 and carried this to the flag. Musquin’s task is to commit to eroding Hahn’s eight point lead in the remaining two rounds.

“The track was really good today and I enjoyed the whoops in practice and in the heat but they became very tricky in the main event. Unfortunately, they got the best of me and caused me to crash. I am bummed because I know I had faster lap times than Blake and Wil, but unfortunately, I made a mistake and wasn’t able to catch back up to them today. I am now eight points back so I am definitely going to have to get back on the top step at the remaining rounds,” remarked Musquin.

Monster Energy Kawasaki’s Ryan Villopoto continued his winning ways at Reliant Stadium in Houston, Texas on Saturday by capturing his eighth victory of the season. Three-time defending Arenacross champion Tyler Bowers made his debut with Monster Energy/Pro Circuit/Kawasaki in the 250SX class and raced through the field to finish a career-best fourth place. Monster Energy Kawasaki’s Jake Weimer recovered from a crash in the main event to climb back to ninth place.

Five Straight
Villopoto has been on a roll since his win in St. Louis and has won every main event since. In Houston the defending champion qualified in fifth and looked to have his hands full, but that was not the case come the night show. Villopoto jumped out of the gate on his KX™450F and took the early lead in his heat race until the red flag was waved on lap three. The field was lined up for a staggered restart in which Villopoto maintained his lead to take the win. In the 20-lap main event, he took control of the lead just four corners into the first lap and was never challenged. Winning his fifth consecutive main event, he extended his lead to 21 points in the championship with only four rounds remaining.

“Getting five in a row is incredible,” said Villopoto. “We’ve come a long way since Anaheim and have constantly improved to the point where we are now on top. The field is so close that you really need to have everything dialed in order to win and we’ve been able to do that these past few weeks.”

Making the Jump
Three short weeks ago, Bowers wrapped up his third consecutive Arenacross championship and was planning on taking some time off until he got the call from Pro Circuit’s Mitch Payton. Bowers tested with Monster Energy/Pro Circuit/Kawasaki over the past two weeks and got the KX™250F dialed for his debut with the team in Houston. Although he didn’t have any expectations for himself, he took many by surprise when he qualified third overall in the 250SX class just a hair off the speed of the championship contenders. Bowers rode a strong heat race to finish second, but in the main event he tangled with another rider and nearly found himself on the ground in the first turn. He made quick work of the field and caught the leaders, battling for third but ultimately finishing just off the podium in fourth place.

“I know that with this great team behind me, paired with my ability, we can be upfront battling,” said Bowers. “The main event was a bit hairy the first few laps. I rounded the first turn in 19th after a rider went down in front of me and within the first few corners I had made my way into the top-10. From there I just concentrated to riding my lines and trying to keep with the leaders. With another week on the bike and we’ll come out swinging in Minneapolis.”

Ups and Downs
Weimer started the day with competitive times in qualifying. He finished fifth in his heat race and got a decent start in the main event, but got pinched off and rounded the first lap in 10th. He progressively made passes forward until he collided with another rider and found himself on the ground. Weimer then fought hard to regain the positions he gave up and crossed the checkered in ninth.

“Tonight was not ideal,” said Weimer. “I didn’t get the starts I needed, but we know what we need to work on. We have a game plan and should be back up front next weekend.”

Recovering
All three of the initial East Coast Monster Energy/Pro Circuit/Kawasaki riders were present in Houston to support their new teammate Bowers. Dean Wilson, Darryn Durham, and Justin Hill are all working hard to return 100-percent healthy for outdoors and were on hand to spend time with the Texas fans and lend their expert opinion to Bowers as he made the transition to Supercross.

Jack of All Trades
Although Arenacross and Supercross have many similarities, the racing is extremely different. Bowers is no stranger to Supercross, he is a stranger to not being on the podium and battling for wins. Bowers scored his best career finish on Saturday in fourth, but will not be happy until he is back to his winning ways.

Beast from the East
Monster Energy Supercross continues on to Minneapolis, Minnesota at the Metrodome, where the Eastern Regional 250SX series will have their last round before going on hiatus until the final rounds in Las Vegas. Bowers will continue to test with the team and look to challenge for a win, while Villopoto inches closer to another championship.