Monster Energy AMA Supercross, an FIM World Championship, returned to the West Coast for the 15th race of the season on Saturday night in front of a cro 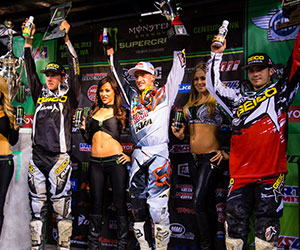 Both Barcia and Villopoto slowly pulled away from Millsaps as the race progressed, setting the stage for a battle to the finish. The Seattle crowd cheered on V 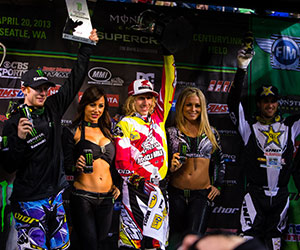 illopoto, their hometown rider, but as the duo encountered lapped riders, Barcia’s lead began to increase.

Barcia led all 20 laps of the Main Event, mirroring the performance from his inaugural 450SX Class victory at the second race of the season in Phoenix.

“I tell you what, that holeshot is so key,” said Barcia. “We made some great changes today on the bike. It was a tough track with so many lines, but there was one main line that was so much better than any other. I’ve been waiting for this since Phoenix.”

Villopoto’s runner-up finish extended his podium streak to nine races, during which he has finished either first or second.

“I didn’t get the start I wanted, so to come out the way I did and salvage that was awesome,” said Villopoto. “I rode 20 solid laps but Justin [Barcia] was on it. I just really couldn’t do anything with him. The way it turned out tonight was pretty good for what we were up against [at the start].”

Millsaps finished third for his 10th podium finish of the season, and moved into second in the championship standings. Dungey overcame the incident on the opening lap to finish fourth after starting in 18th position.

Villopoto holds a 25-point lead over Millsaps in the 450SX Class standings and can clinch his third straight Monster Energy Supercross title if he maintains that advantage following next weekend’s 16th race of the season.

In the first Western Regional 250SX Class Championship Main Event since the sixth race of the season in February, GEICO Honda’s Eli Tomac grabbed the Nuclear Cowboyz Holeshot Award and quickly pulled away from the field. Behind him, Rockstar Energy Racing’s Ryan Sipes and Troy Lee Designs/Lucas Oil Honda’s Christian Craig assumed second and third, respectively. Roczen positioned himself in fourth, but moved into a podium spot prior to the conclusion of the opening lap.

With his championship rival behind him, Tomac opened a multiple-second margin as Roczen methodically moved past Craig into second on Lap 2. For several laps, the pair maintained their distance from one another until Tomac came up short on a jump on Lap 9 and was thrown off his motorcycle. Roczen assumed the lead, but Tomac was able to remount in second.

Roczen pulled away for the remainder of the 15-lap Main Event to extend his lead in the point standings. He has finished first or second in each of the seven Western Regional 250SX Class Championship races this season.

“It’s good to bounce back from a bad Heat Race with good start,” said Roczen, who crashed twice in his Heat Race. “I just put my head down and rode smart. The track was really technical out there, with a lot of ruts. It feels good to get a win after such a long break; it’s tough to get in a groove after so much time off, but I’m so happy I was able to walk away with this one.”

Despite his misfortune, Tomac still finished second, but faces a significant deficit in the championship with only two races remaining.

“The track was getting tough in the Main Event,” said Tomac, who still has the most wins in the class with four. “I got a good start and started pulling away, but then I made a big mistake. It’s kind of a bummer, but that’s racing. I was lucky enough to be able to get up in second and still finish on the podium.”

Roczen carries a 20-point advantage over Tomac into next weekend’s eighth race of the Western Regional 250SX Class Championship.

Monster Energy Supercross travels to Salt Lake City next Saturday, April 27, for the penultimate race of the season from Rice Eccles Stadium.

Red Bull KTM Factory rider Ken Roczen made an impressive return to the Supercross track on Saturday night securing his third win of the season at the seventh round of the Monster Energy AMA Supercross 250SX West Championship held at Centurylink Field.

Factory teammate Ryan Dungey managed to scramble back from the back of the field after a early crash in the 450 class main event to finally advance to fourth place at the flag.

But it was Roczen’s night, despite a tricky heat race. KTM’s German teenager was second at the start of his heat and quickly passed Jason Anderson to move into the lead before the race was red flagged and restarted. When the gate dropped again, Roczen launched out to another second place but crashed in the mud of the rain soaked circuit and dropped to eighth. His trouble continued in the following lap when he crashed again and dropped back to twelfth. Roczen scrambled back into the race and finished seventh to qualify for the main event.

When the gate dropped for the main, Roczen put his KTM up front rounding the first corner in fourth position. Two laps later he was in second place and began to close in on the lead ride of Eli Tomac. The two riders quickly gapped the field and then at the halfway point Tomac crashed and Roczen was in front. He then went on to settle the race with a comfortable nine-second margin.

“It feels great to get the win here tonight,” remarked Roczen. “We had a long break and it is good to return to racing and ride up front. The track was very challenging and it was all about riding a smart race. I am happy I didn’t suffer any crashes in the main event and could gain more points in the championship standings.”

Dungey scrambles back to fourth in 450 class
Roczen’s teammate Ryan Dungey put in a tremendous ride at the fifteenth round of his main 450 class event to rebound after a first corner crash to finish fourth.

Dungey launched his evening with a strong ride in his heat where he was fourth at the start, quickly moved into second and carried the position through to the flag for easy qualification to the main event. But riders were faced with a quickly deteriorating track as they lined up for the main event. Rainfall from earlier in the day had left the track very muddy and it was now deeply rutted and slick in the straights.

Dungey managed to get a decent jump off the start in his main event but collided with multiple riders in the first corner. He quickly recovered and had moved into fourteenth place by the end of the lap. He then set about picking off riders in a remarkable charge through the pack and 10 laps into the race he was up to fifth. He then inherited fourth place when Trey Canard crashed but despite impressive lap times was unable to move up the order, going on to finish fourth.

“I am really bummed that I suffered a crash in the first corner,” remarked Dungey. “I am happy with my ride back through the pack but I lost some valuable points in the championship tonight. I am really looking forward to the final two rounds where I feel like I can battle for the win and hopefully get on the top step of the podium for my team before the end of the series.”

With two rounds remaining, Dungey, now in third and trailing second placed Davi Millsaps by one point, sits 26 points down in the championship point standings.