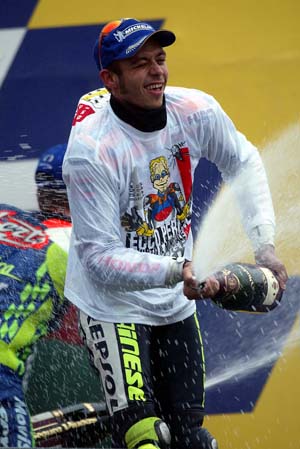 Valentino Rossi answers what role people play in his life and other things.

Father, Graziano.
“Apart from being my father, Graziano has always been one of the main supports of my sports career. He was the one who introduced me and supported me when I began to be interested in the world of bikes and racing.”

Mother, Stefanía.
“My mother always preferred to stay away from races. The most important for her is to see that I’m OK and happy. She usually gives me advice about personal things, but when it is about racing, it’s my father who can give me advice if needed.”

Friend, Uccio.
“He is my best friend and a couple of years ago he also began working for me, taking care of the motorhome and going with me to the races. We know each other since we were kids and that’s a great advantage when you are working together.”

Manager, Gibo
“Gibo is not only my agent, he’s also my friend. You could say that he is 50% manager and 50% friend. We have a very special relationship, we don’t only talk about bikes, we also talk about our private stuff.”

A favourite in motorcycle racing?
“Kevin Schwantz was the one who impressed me most of all the riders of his generation. He was spectacular and brave, braked like nobody else and never resigned himself to the fact of finishing second.”

Outside the racing world?
“Ronaldo, the soccer player. Because of his character, personality and professionalism, and because he is out of the ordinary.”

Is there life beyond the races?
“Yes, of course there is. While we are in the World Championship, we all work hard and are dedicated to our jobs, but there are obviously a lot of interesting things beyond this world. When I’m not racing I love to spend time with my family and friends, with no doubt the most important things in my life.”

Dog or cat?
“I prefer dogs, I don’t like cats at all. I have a bulldog called Guido, and I have very interesting conversations with him when we’re alone… Besides, Guido is always with me on the bike. I have a drawing of him on the back of the bike. Guido lives in Italy with my mother because I can’t have him with me in London due to the constant travelling.”

Sea or mountains?
“Mountains.., although I also like the sea in Ibiza a lot. I like to go to the mountains because it’s a place where you usually find peace and it’s easy to relax.”

What does fame taste like?
“Fame is a mixture of sweet and sour. The sweet taste are the advantages you get due to your fame, but it sometimes tastes sour because the moment you become famous you stop having the intimacy and peace you would like to enjoy.”

A car?
“I’ve been fascinated by Porsches since my childhood. Right now, my favourite is the 911 GT2, a very funny “toy”…”

Does music calm the beasts?
“I like music a lot, but I think that there is a time for each kind of music. It helps me both to relax and to cheer me up.”

The Euro confuses me?
“No, although if you don’t get used to it, you feel like you are spending less and the fact is that it’s exactly the contrary. But, anyway, the most important is to have enough to be able to spend it.”

A quality?
“I’m very sincere, I always say what I think.”

A defect?
“I’m always late and that’s something I can’t avoid, no matter how hard I try.”

Marital status?
“Single. I had a girl friend a couple of months ago but I think it is better to be single, given the lives we lead. It’s very difficult to have a relationship when you’re always far from home, travelling from one country to another… Of course there’s the option to take your girl to all the races, but that’s something that doesn’t convince me.”

A religion?
“I’m a practising catholic.”

Ideologically, right or left?
“I’m not interested in politics at all, I don’t have any kind of ideas and it’s one of the things I like less.”

The worst of living in London…
“The traffic and the weather. For a Latin it’s hard to get used to living in a place with so much rain and so little sun. And the traffic, because driving in London is almost impossible, neither in a car nor on a bike.”

I miss…
“I miss having a one metre eighty tall Brazilian model by my side… No, the truth is that there is nothing I miss, I have everything I need to be happy.”

I would define myself as…
“I think I’m above all a funny person, I like to have a good time and enjoy life, together with my friends and my family.”