The Movistar Yamaha MotoGP Team didn‘t rest on their laurels in between the first and second 2017 official IRTA MotoGP pre-season test. After a first successful stint of Yamaha‘s ‘pre-season media tour’, Maverick Viñales and Valentino Rossi went on to meet their fans and the media in Thailand and Vietnam. 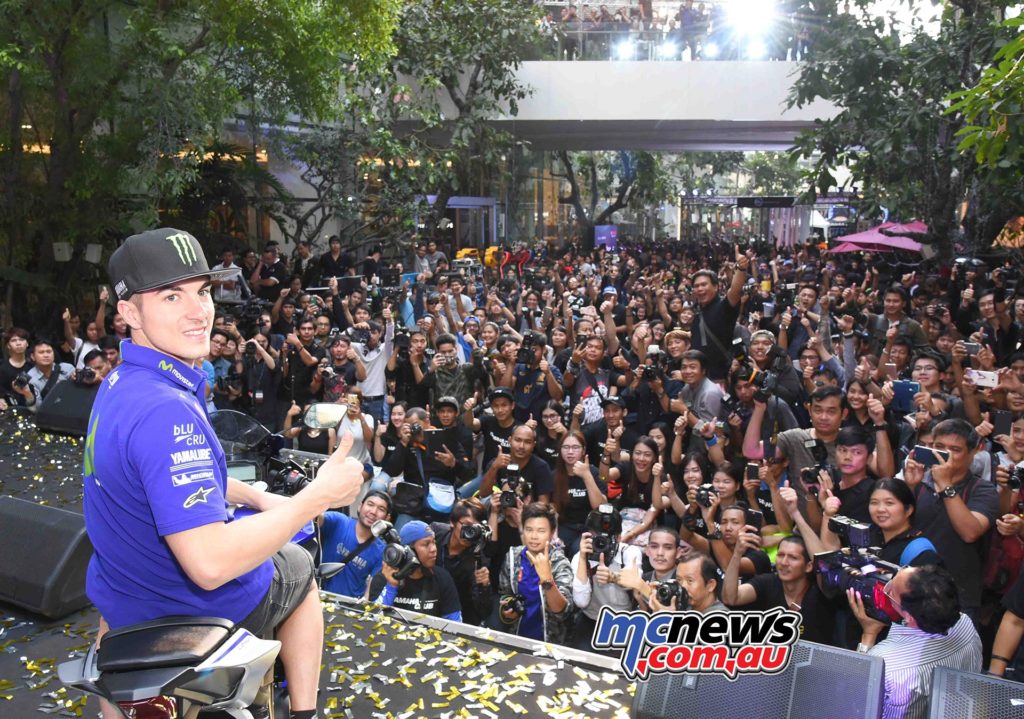 Energised from the first half of the ’Asian media tour’ that had brought him to Indonesia and the Philippines, Viñales travelled to Thailand on Febuary 11th to start the second half of the promotions the day after.

Following a morning photo shoot, the young Spaniard attended the Yamaha Custom-Made Battle and was happily surprised by the large crowd that had assembled at the EM Quartier in Bangkok to see him take part in the presentation on stage. 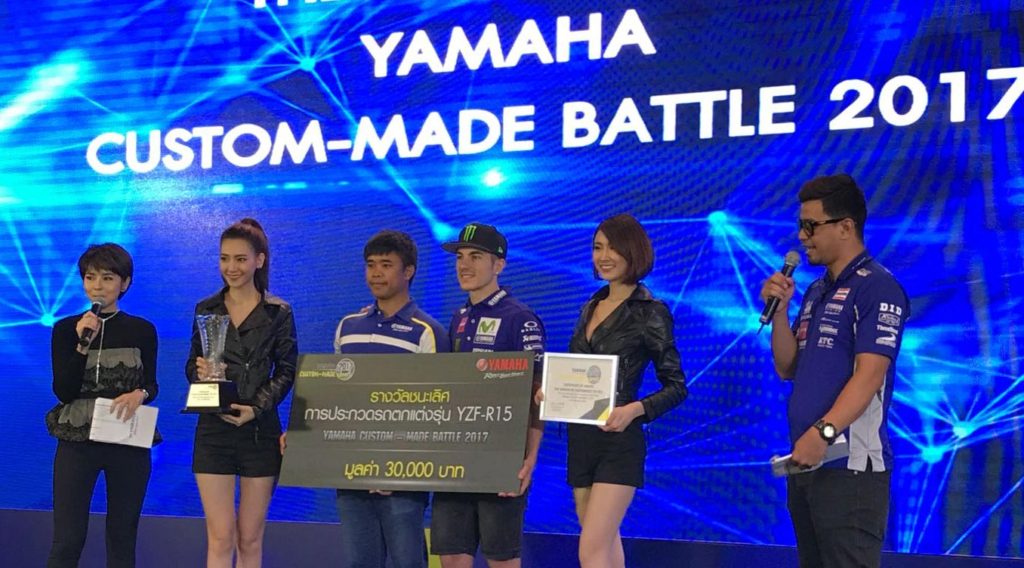 After posing with the creators of the Yamaha Custom-Made Battle bikes and the fans, Viñales headed straight to the Yamaha Rev Community where again a large sea of spectators had assembled to catch a glimpse of the new Movistar Yamaha MotoGP rider. Warmly greeted as he entered the stage, Viñales stayed for a while to help present the Yamaha YZF-R15 before he quickly had to make his way to the airport. 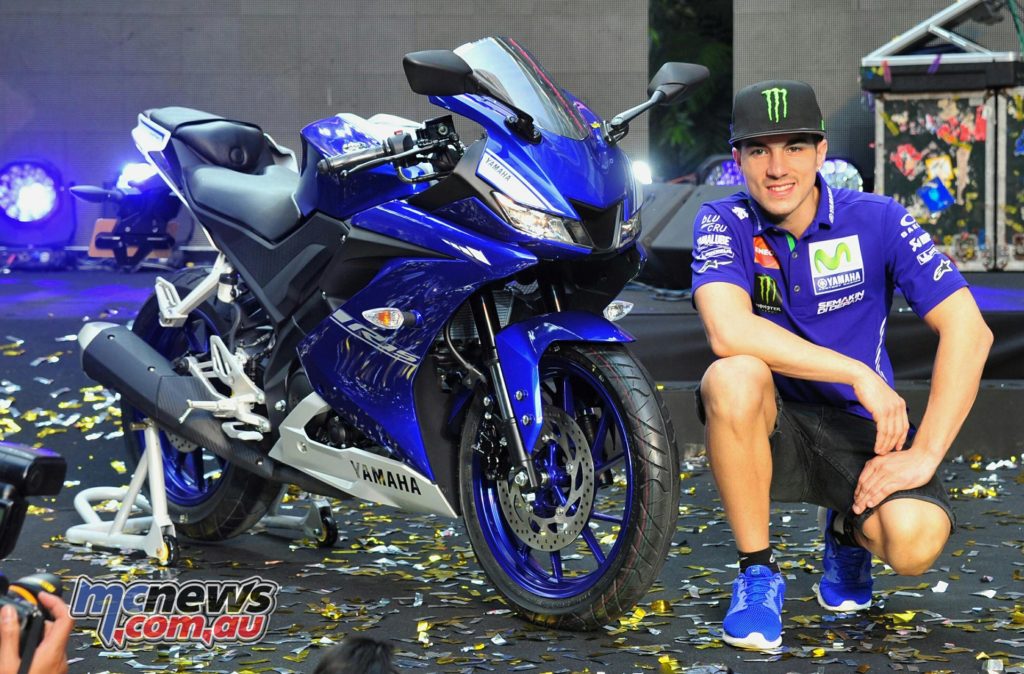 “I really enjoyed the event in Thailand, it was incredible how many people attended the event in Bangkok. I keep saying it, but I didn‘t expect to receive such a warm welcome every time we visit one of the countries during this tour… The people are so friendly and passionate about MotoGP and this gives me extra motivation to do them proud on the track. Today I also had a lot of fun in Vietnam, especially when I got to ride the Yamaha Exciter scooter on a short circuit with Valentino. I love to do these kinds of events, playing around on the bike and sharing the experience with the fans. 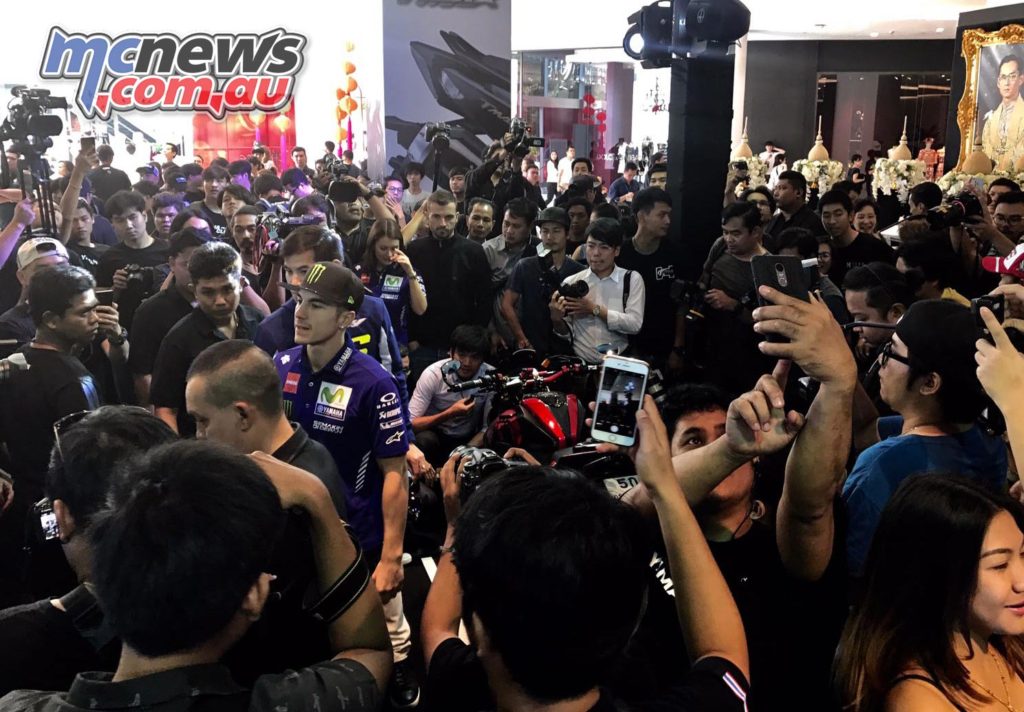 “I want to thank the Yamaha distributors from Thailand and Vietnam for organising these two amazing days and for the kindness with which they have treated us. I couldn‘t have asked for a better end to the promotional tour. I will now focus on the test in Australia, because I‘m impatient to ride my M1 again.” 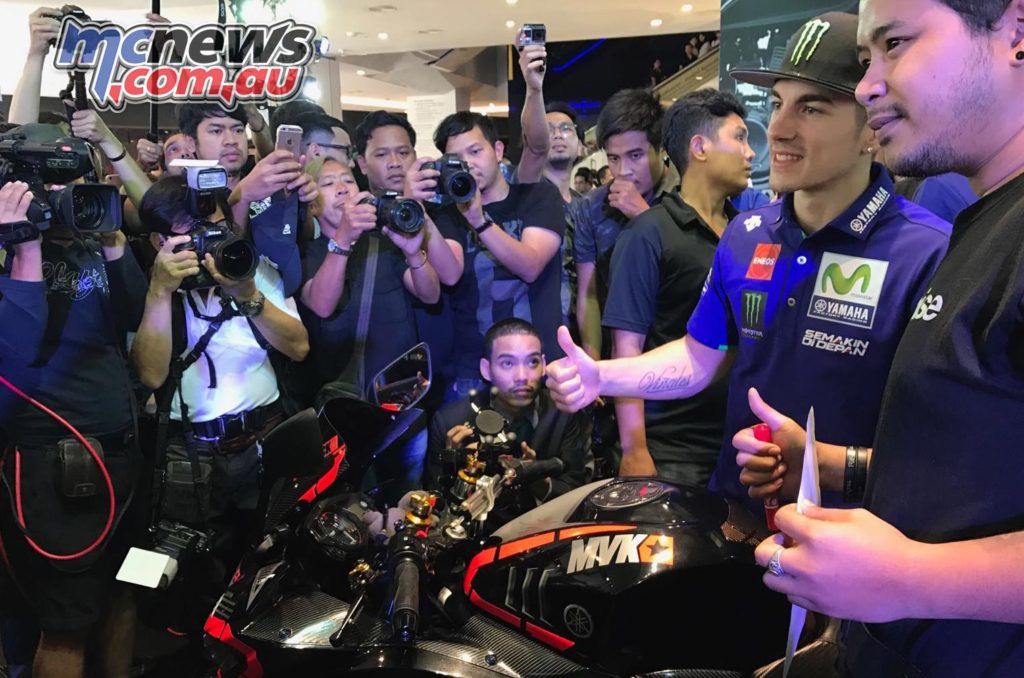 After his lightning stop in Bangkok, the young Spaniard jetted off to visit Vietnam. There he was joined by Valentino Rossi the next day when they attended a press meeting. During the presentation the riders got to add the flag of Vietnam on the YZR-M1 as a token of appreciation for Yamaha Motor Vietnam‘s support to the Movistar Yamaha MotoGP team. 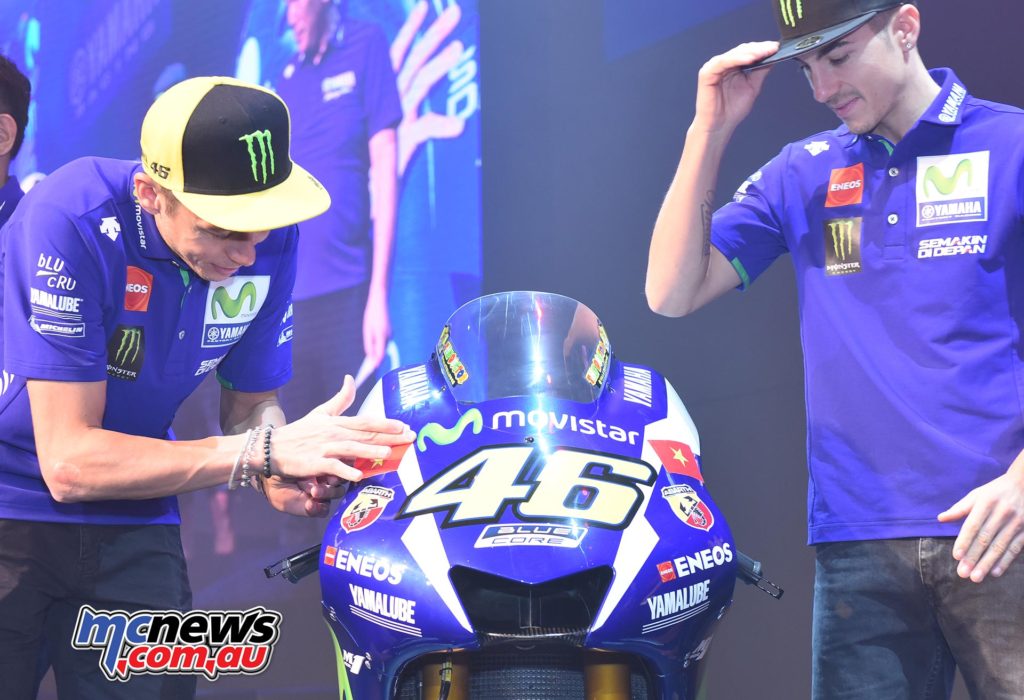 After the press meeting in Hồ Chí Minh, Rossi and Viñales were in the mood for some action and headed to the YRider Event, where Rossi was surprised with an early birthday cake (he will turn 38 on February 16th). 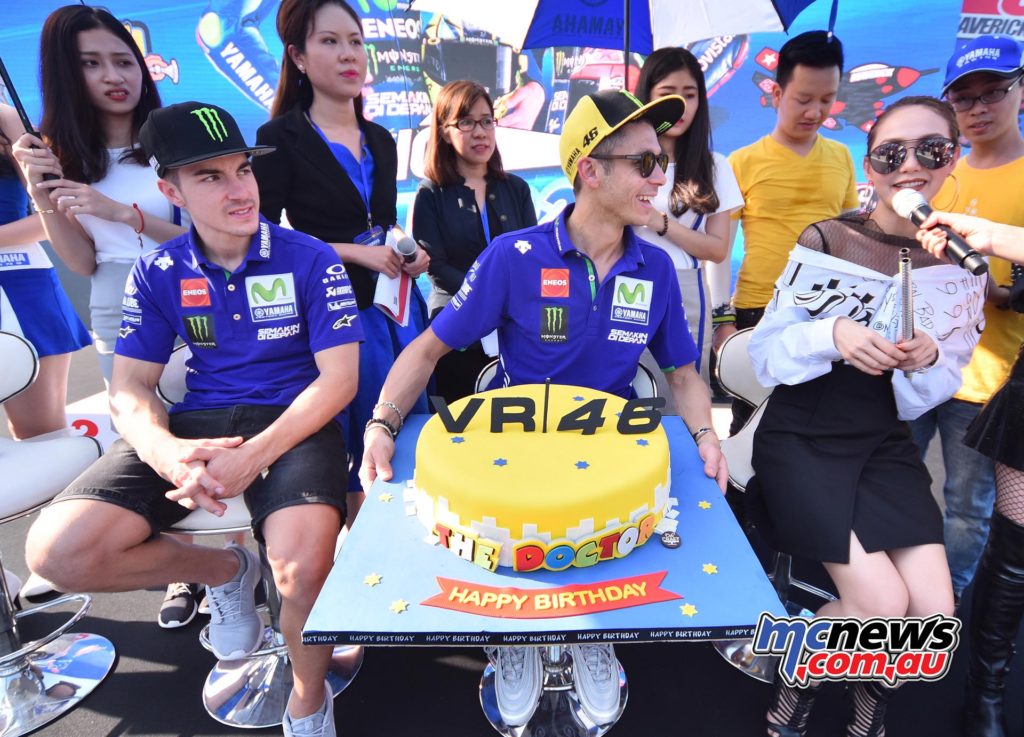 “It was my first time visiting Vietnam and it is a really beautiful place. I haven‘t had time to see a lot of Hồ Chí Minh, but during the car trips I always looked out the window: it’s amazing how many people are on the move with scooters! The day organised by Yamaha Vietnam was very nice and it made me realise how much passion there is also in this place for the bikes. I’ll gladly go back to Vietnam in the future. I also hope that in the future some Vietnamese riders will be able to become professional riders! Now we leave to go to Australia where we will have three days of important testing. I‘ll be very happy to be back aboard my M1 again, I can‘t wait to continue testing.” 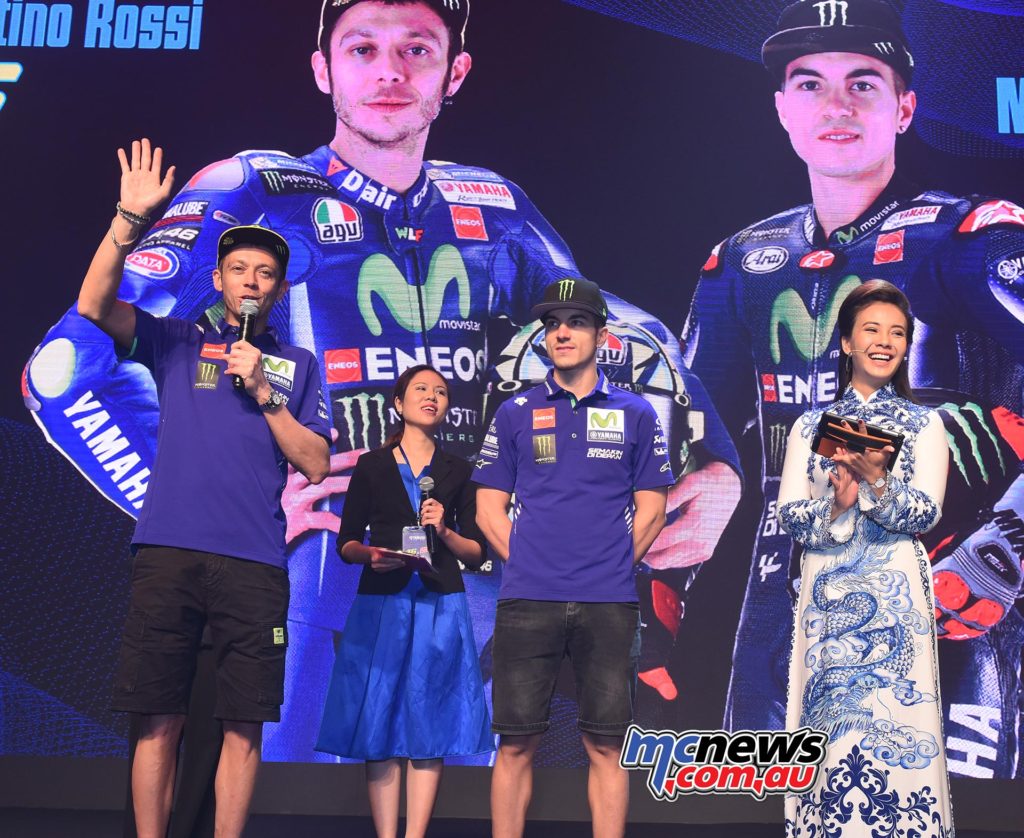 Taking time to talk on the podium and wave, the riders also made sure to entertain the fans off stage and grabbed their helmets to head out on a small circuit aboard 2017 Yamaha Exciter and NVX 155 scooters. 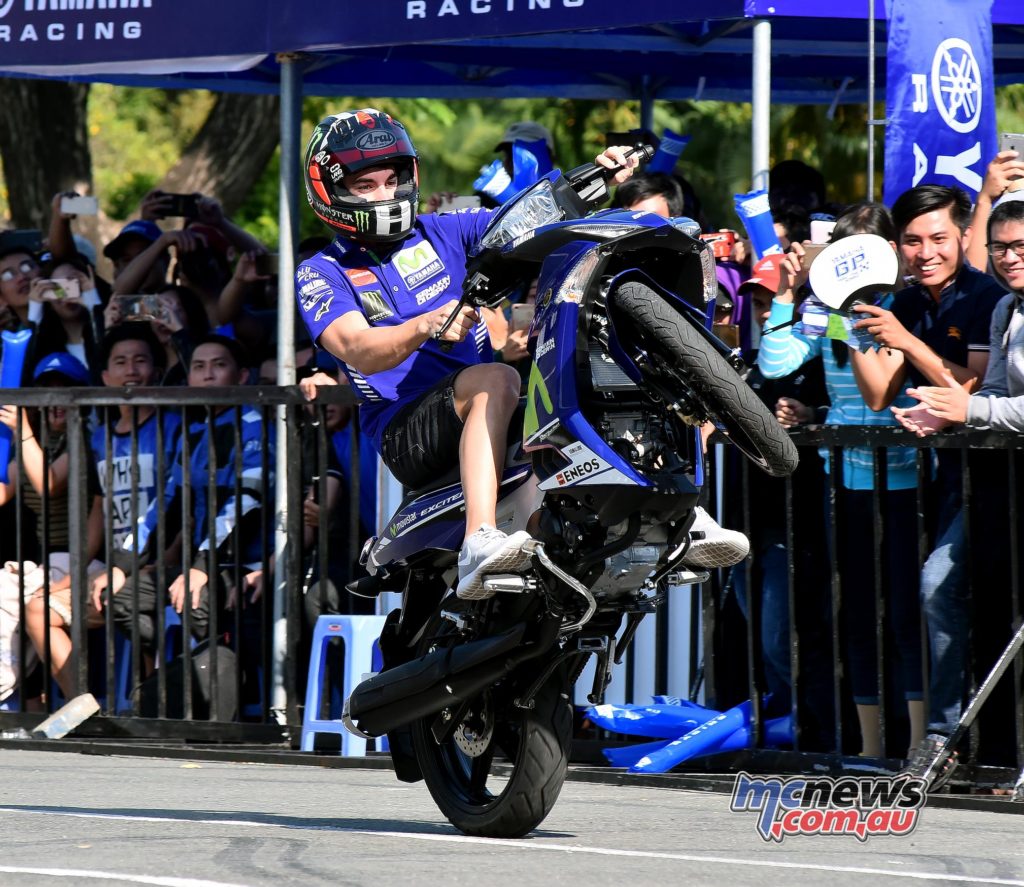 “I‘m very happy to see the Asian Promotional Tour concluded in Thailand and Vietnam with two nice events. For the riders, this is the first time visiting Vietnam and we are very pleased with the warm welcome that both riders received. It is a good message sent by Yamaha Motor Vietnam and the local fans, that they support Yamaha and the Movistar Yamaha MotoGP team. For this reason we will adopt the flag of Vietnam on the bike this year, with the hopes that this activity will further increase the popularity of MotoGP racing in Vietnam. 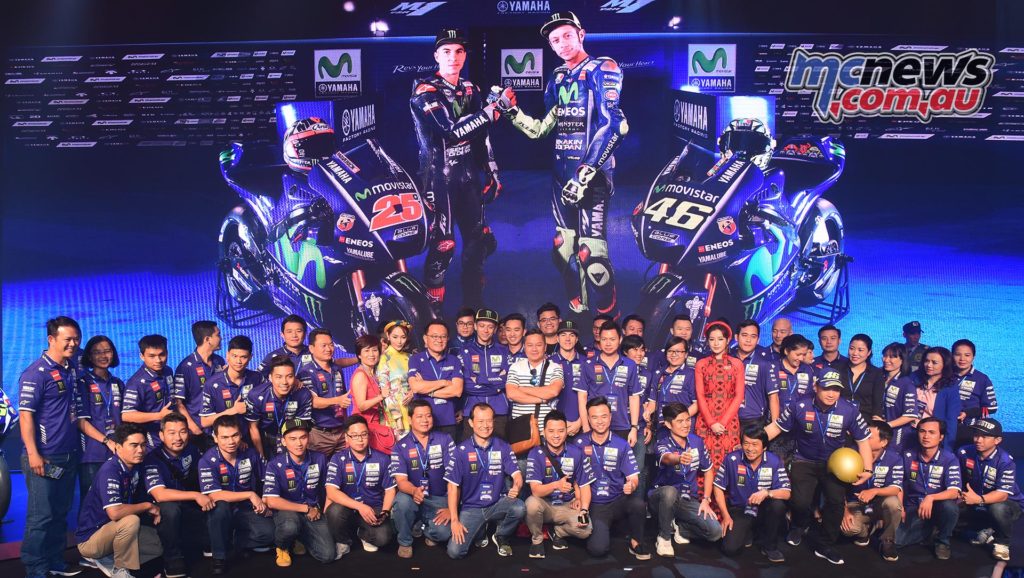 “We highly value the Asian market and the passion that they have for motorsports and Yamaha. The main goal of this tour was to further build on our relationship, both with the Yamaha dealers and the fans, so we can all look forward to sharing many more great moments during another exciting season of MotoGP.” 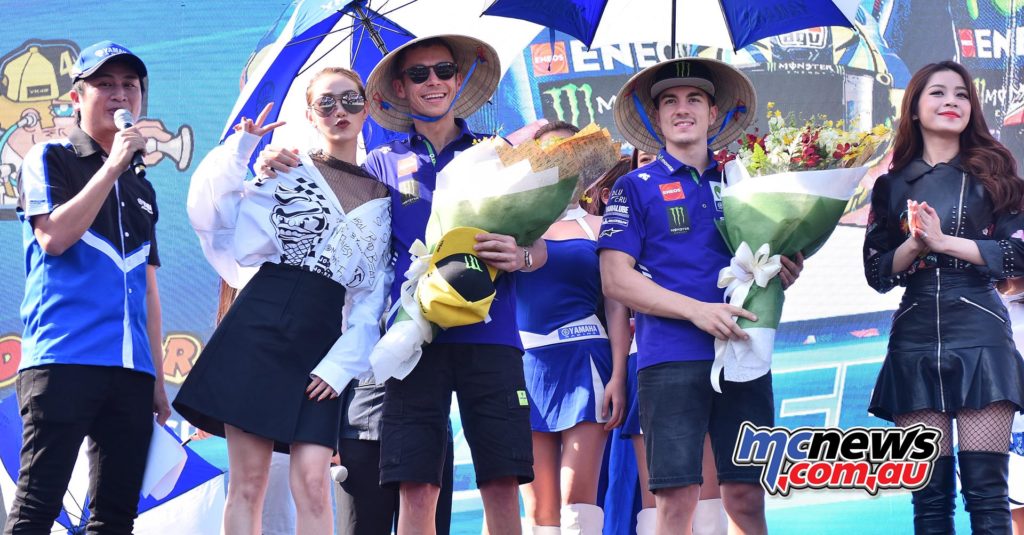 The Movistar Yamaha MotoGP Team are now winging their way to Australia for the Phillip Island MotoGP Official Test from Febuary 15 – 17th.