Sepang one of the toughest on brakes | Brembo

Sepang one of the toughest on brakes – Brembo

The Sepang International Circuit will host the 17th race of the 2016 MotoGP World Championship from 28 to 30 October. Inaugurated in March 1999 by the Prime Minister of Malaysia, the circuit is located 85 km from Kuala Lumpur within an oil palm plantation measuring 260 hectares. The track was designed by German architect Hermman Tilke and the first 500cc World Championship race was held here in 1999 when this circuit took the place of the Shah Alam and Johor tracks, which had been the stages for the first 8 editions of the Malaysia GP.

Measuring 5,543 metres, this is the longest track on the Motorcycle Grand Prix calendar and it is one of the most challenging on the bikes’ braking systems. Managing the temperatures is quite critical due to the numerous braking sections, the significant amount of time spent braking and the tropical climate.

Indeed, during last year’s race, the air temperature was 35 degrees and that of the asphalt was 47 degrees.

According to Brembo technicians, who work with all of the MotoGP riders (Brembo is supplier to 100% of the premium class riders), the Sepang International Circuit is indubitably one of the most challenging tracks on the brakes. On a scale of 1 to 5, it earned a 5 on the difficulty index, the same value assigned to Motegi and Barcelona. 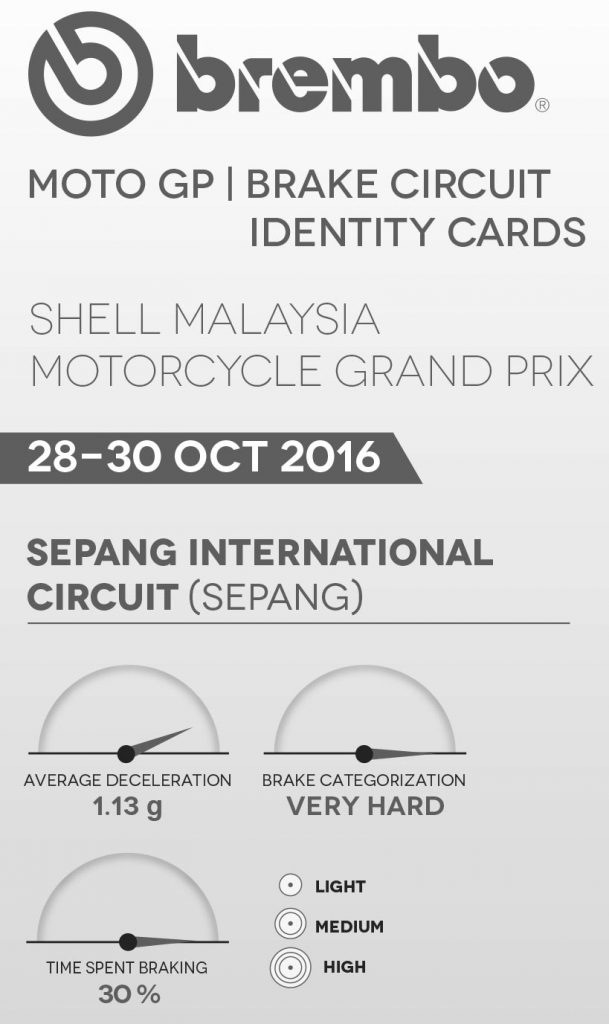 Brake Use During the GP

The presence of 15 curves along the track requires very frequent use of the brakes, which not coincidentally are employed for more than 37 seconds per lap or 30% of the overall duration of the race. A rather high figure results from summing up all of the force applied by a rider on the brake lever from the starting line to the chequered flag: almost 1.1 tonnes, which is equivalent to the weight of about one hundred macaque monkeys. 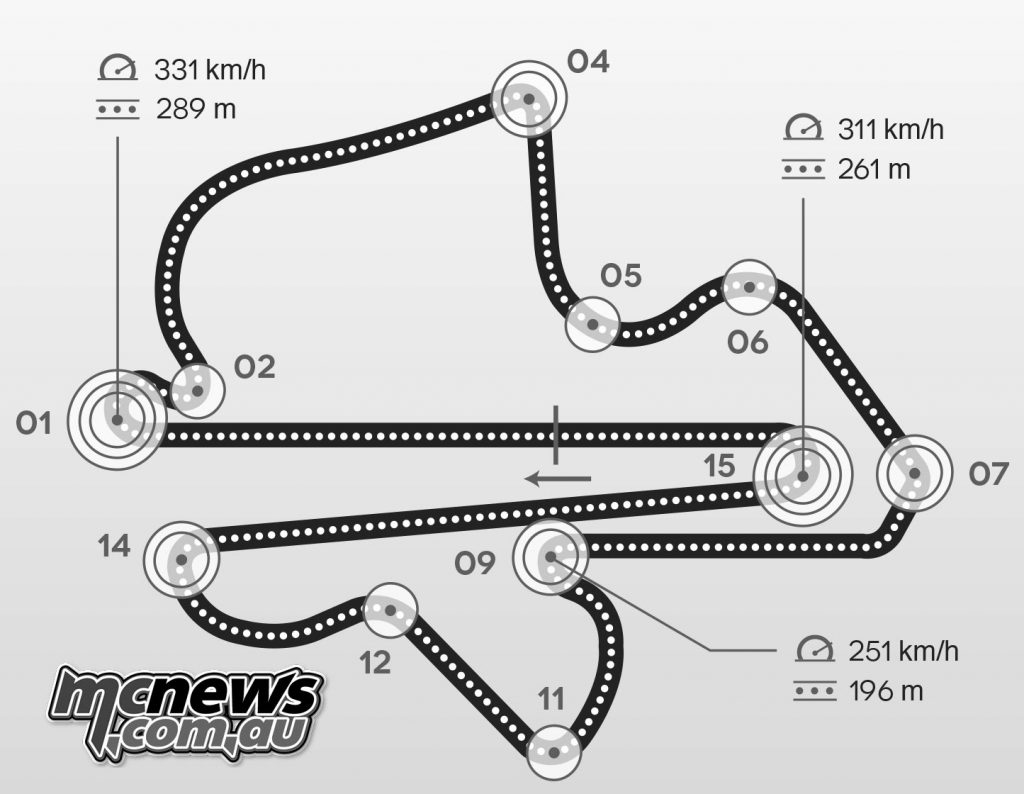 The Most Challenging Stops

Of the 11 braking sections on the Sepang International Circuit, only 2 are considered highly challenging on the brakes, but 4 present mid-level difficulty and 5 are light. However, on this same track there are 5 very difficult braking sections for the Formula 1 cars.

The most challenging curve is identical for both types of races: the Pangkor Laut (curve 1). This turn is taken by the MotoGP bikes going 67 km/h after braking for 6 seconds to drop from 331 km/h. At this point, the drivers apply a load of 7,7 kg on the brake pedal and undergo a deceleration of 1.5 g. To accomplish this, the bikes travel 289 metres.

Another tough turn is Curve 15, which comes immediately after the Penang Straight: the MotoGP bikes go from 311 km/h to 68 km/h in 5.5 seconds by applying a 7.3 kg load on the brake lever. The braking space is registered at 261 metres. Curve 4 is the only one of the remaining turns to require braking for more than 200 metres.

Curve 2 is limited to just 34 metres, yet the bikes arrive in second gear going 88 km/h and they shift to first gear to go 62 km/h. 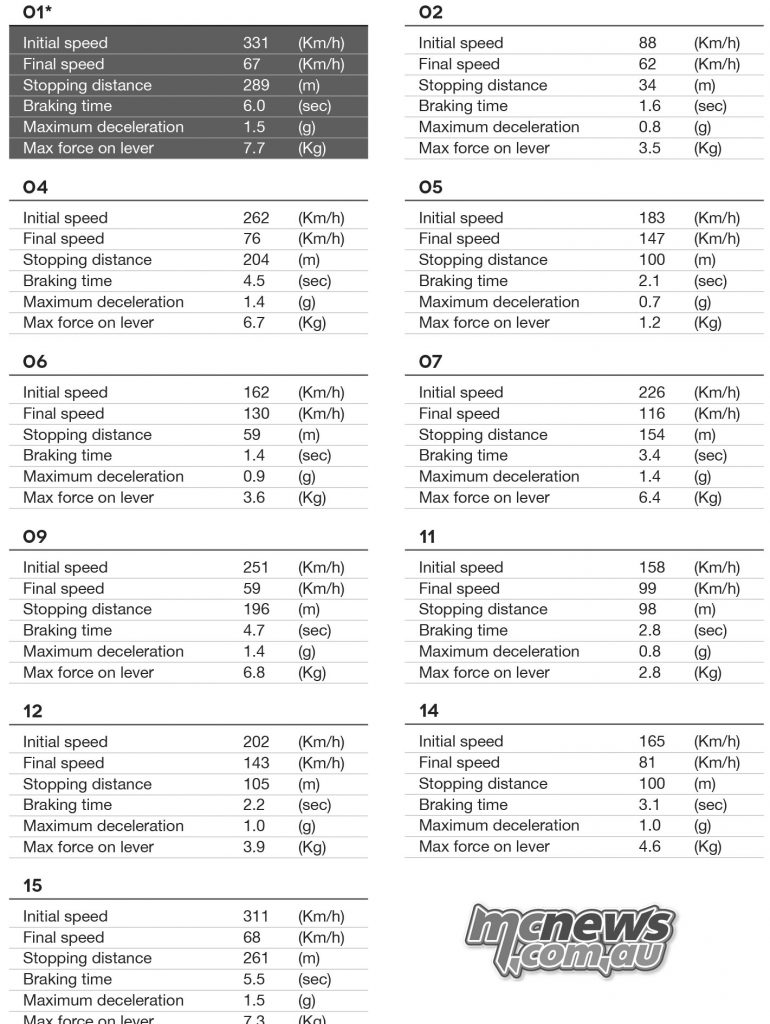 Motorcycles with Brembo brakes have won all 24 of the premium class Malaysia GP races competed in up to now. This incredible series of victories began in 1991 with John Kocinski on the Shah Alam Circuit. From 2002 to 2006, Italian riders won all five consecutive editions: Valentino Rossi won three, Max Biaggi and Loris Capirossi one each. In the last 4 years however, Spanish riders have triumphed every time, all riding Honda bikes.