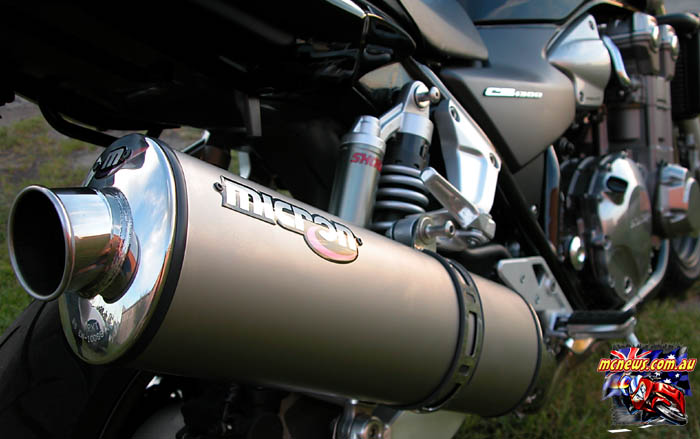 The RF900R has one major downfall, most people do not like the way it looks, I think it looks OKAY, some love it, most loathe it. But after you get past that first impression and have ridden the 937cc sports-tourer – opinions can change quickly.

The RF9 was designed to fill the gap between Suzuki’s all out fang machine, the GSXR-750 and the long in the tooth GSXR 1100.  It fulfils this role quite well and is a far superior package to the GSXR-11.

On its release the Japanese company had got a bit carried away with itself, advertising that the RF9s looks were modelled off a stingray the designer had seen at an ocean aquarium.  Maybe the Japanese are impressed by such statements, but I think us down here on the flipside just found those statements a bit corny and ridiculous.

The engine is quite good, it is now being left behind by some of the better modern engines that are found lurking beneath the plastic of the ZX9RC and YZF-R1. However, It is still good enough to out grunt a Fireblade on the dyno.

The in-line 4 cylinder was designed by Hiroshi Lio who also had a lot of input on the GSX-R series of engines.

He and his team decided that the fitment of small (for a 900+) 36mm carbs would help preserve low and mid-range torque while not sacrificing too much top end.  The 28mm intake valves/24mm exhaust valves are also fairly small for the size of then engine, also for the same reason.

The final drive is quite high for a bike with a sporty nature, 43/15 is the combination of sprockets.
I would be tempted to add a couple of teeth to the rear for some more zap as 5th gear is a tad long.
The acceleration that the engine provides is great, easily the equal of many other bigger engined sportsbikes designed in 1994.

The riding position while not an armchair ride, is appreciably more comfortable than the GSXR-7.

The bike does have a few vibes coming through the grips around the 110 mark but these disappear when you pass 130.

The chassis is a good balance between comfort and fang modes. On standard settings I would say that its handling on very rough roads is a match for nearly anything.The frame itself is painted steel which is fairly rare these days but does look a little classy and is a change from the polished alloy that we normally see.

Brakes are fairly good, but not up to 1999 standard when compared to other bikes that are now it’s competitors.  The opposition was bested in most areas when the RF900R was released in 1994, but they have moved on while the RF has stood still.Fuel range from the 21 litre tank (16 main, 5 reserve) can be stretched to around 300 kilometres when exercising restraint or can be drained in around 220 kilometres if you let yourself get carried away.

The dash layout is simple and uncluttered, although how Suzuki’s low-spec GSX750F can get a fuel gauge, while the RF can’t, I will never know.   The horn is so pitiful it isn’t even worth trying to use it.

Suspension had little adjustment to offer up the front, preload is the only offering up the pointy end,  while out back you have 7-way preload, step less compression damping adjustment and 4-way adjustable rebound damping.   I didn’t really find that much appreciable difference could be felt between the settings, unlike bikes with higher spec’ suspension.

The suspension does acquit itself admirably when a few bumps are thrown in to the equation, the RF9 shrugs them off as though they weren’t there and instils supreme confidence in the rider.

The RF does not have the technological brilliance of the VFR 800, but would well and truly shame the VFR when the time comes to press on a bit quicker than socially responsible.Finish is not one of the main strengths of the RF900R, but this can be forgiven a little when you consider the lowly $13999 entry price. This gets you a back roads blaster that will not get left behind by anything else on the road, if you are up to the task – so is the RF9.

Second-Hand RF9s are selling for around 10k when they are in good condition with low-mileage, this makes them a truly unbeatable Second-Hand buy, in a lot of cases they can be picked up for less than 10k.

If you want a new one, get in quick as they are no longer being imported by Suzuki Australia.  A new one would probably have to come from a dealer who happens to have one on his showroom floor.

When a bike as good as this can’t sell well it shows you just how brilliant all sportsbikes are these days.