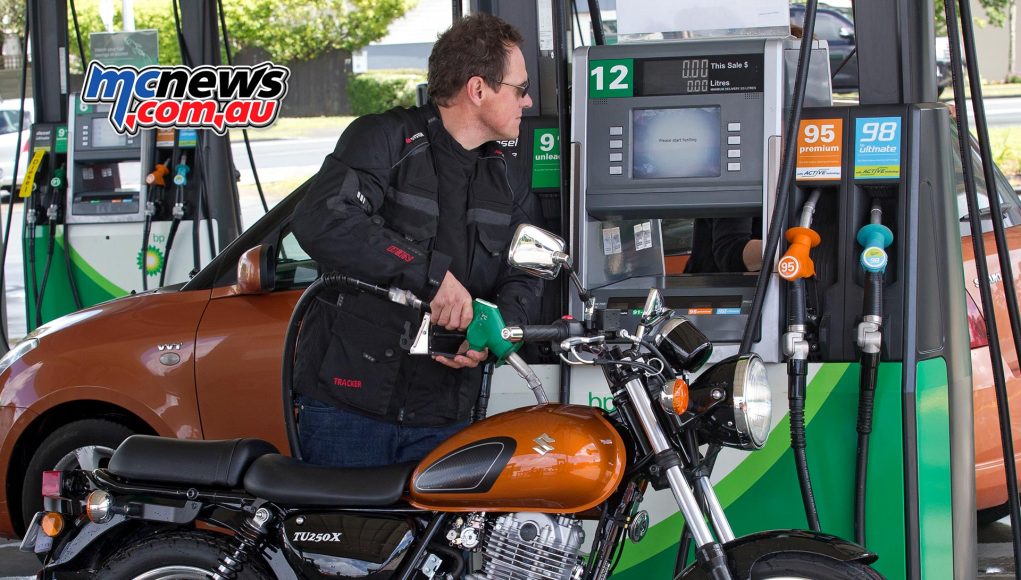 In its base configuration, bog standard out of the box, this little Suzuki TU250X looks like a wee cracker. Its retro styling is a nod back to seventies cool, even down to the wide, square brake pedal with rounded knurls and a narrow gauge gear lever.

I love the candy gold tank, black shiny guards and chrome wheel rims. Very 1972. I was reminded by a friend who like his ratbikes – the rustier and worn the better – that the Suzuki TU250X was actually a cool little bike in it’s own right.

However I suspect much of this was down to the fact that many a bobber and stripped back little street cruiser has started life from this base machine. All the good basic detail is there, a single cylinder, 249cc air-cooled, four-stroke motor, coupled with the SDTV (Suzuki Dual Throttle Valve) injection system, which delivers a solid, if not lightning fast, commuter machine.

The split seat looks kind of cool, but at a 770mm seat height is a little close to the ground for my longer legs, and generally I found the bike very compact. This makes it an enticing prospect for learner or returning riders, where its directly aimed.

The wheelbase is 1375mm and it’s a nimble little traffic bike, with slightly narrow bars that make lane-splitting a less fraught exercise than it can be on bigger machines. It is light too, at only 148kg – this is an easy pick up, if it gets knocked over in town.

Taken out for a blast in traffic, I had a ball, zapping comfortably about with plenty of inner city zip. But if you are heading onto motorways it may take a little more fortitude.

It will do 100km/h with a decent handful, but with a weighty rider, a dash of uphill, and a stroppy afternoon headwind, that drops to about 80-85 and you need way more throttle to hold it there.

I managed to get the bike out to 130km/h on a short patch of motorway, but that was absolutely top whack. It’s no racer, but it will deliver you safely on and off the motorways and to be fair, that’s all it needs to do.

Suzuki’s of the seventies used to have names, like ‘Stinger’, ‘Gaucho’ and ‘Rebel’ and I think the TU250X is desperately in need of a name, rather than a model number that makes it sound like… well… a dog biscuit, frankly.

There were a couple of issues which got my attention fairly quickly. On the test bike there was a pronounced vertical bouncing vibration of the front wheel, of about 1 to 2cms at 50km/h, but I suspect the front wheel had flicked a balance weight off. It evened out above and below, but at commuting speeds was annoying.

The other niggle was that under braking the front disc pulsed through the lever, I had a look at the disc surface but found no obvious high or flat spot.

I did think the final drive ratio could do with a wee rethink for general road use, generally we don’t idle along in first for very long, and that first gear ratio is silly, its barely worth the effort, but taking off in second is not for a beginner either.

Looking at a couple of forums on the net I discovered that others had found the same issue, and a recommended fix was taking the rear sprocket from the standard config of 41 teeth to 43 or going a tooth larger on the front sprocket. It would be the first mod I’d make were it to find a home in my garage.

It would take a capable and quite torquey single from useful to very good at absolutely minimal cost. It would also give the little TU a slightly higher top end too for a more relaxed motorway cruise.

Apart from those teething niggles I thoroughly enjoyed bike, it’s the sort of machine which makes you grab your helmet and zip down to the shops to pick up milk and bread and a cake of chocolate, just ‘cos you can.

But it is as a first bike I believe this nimble wee Suzuki will come into its own. There are no weird foibles, the clutch is smooth and gear changing is slick and accurate. The seat height will allow people of all sizes and shapes to get aboard easily, and that cracker little Suzuki engine will pull forever.

Although the standard instrumentation will not baffle the beginner with its one gauge, displaying speedo only, without a rev counter – it’s a bit too spartan for me, and I think in the teen years of the 21st century, a fuel gauge is a bit of a must.

While I’m at it, the indicator light is anaemic in daylight and offers no discernible click as a reminder either, so it’s easy to forget, but this is a retro bike and frankly – at notch under $7k – it’s a head turner on a budget.

Looking at the bike I saw a story emerging and I am not certain it isn’t deliberate by the clever folks at Suzuki. Bear with me… I reckon this bike is perfect for a first rider, the sort of bike that teaches you all the basic riding skills and increases your sense of joy and the freedom of motorcycling, while also whetting your appetite for a bit more of everything, as confidence and ability grows.

To that end, I reckon, dads will help the rider on to a ‘better’ bike, but decide to, “Keep it just in case,” in the garage. Then, over the course of a few months, or even a year or two, convert it to some gorgeous wee rat bike or bobber of their own. Go on… tell me I’m wrong. Good plan?

The 2018 Suzuki TU250X is available now for a Recommended Ride-Away Price of $6,990 ($5,990 + ORC) and is backed by Suzuki’s two-year, unlimited-kilometre warranty. See pictures below specifications for the new colour scheme.