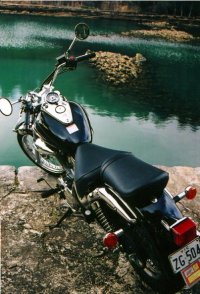 Suzuki’s VL 250 Intruder supplying the bass line through its small twin chrome exhausts. It’s not as loud (thank God) as a Hardly Driveable could perform, but still quite a pleasant attempt from one so small.

Sit back and enjoy the service………

The Intruder’s black metallic paint and chrome everything else was shining in the late afternoon sun, as I arrived in the driveway at a friend’s house. I was greeted with her bounding across the front lawn towards me loudly proclaiming that it was the best looking bike she had ever seen me ride. After explaining to my non-motorcycling lady friend that it’s “Just a little 250”, she said “So what? That means nothing to me, It looks great!”  That’s what this style of bike is really all about, the looks and way you feel when riding it.

If this is the style of bike you lust after, then I think that the VL250 Intruder has all the looks the bigger more expensive 1200cc bikes of this style have. It’s trimmed off with plenty of easy to shine chrome around the engine and seat, although most of the purely cosmetic stuff is plated plastic and not real metal. Mind you plastic doesn’t ever rust and it keeps the weight down.

As is the style for a lot of cruiser bikes, the speedo sits in a chrome cluster on top of the fuel tank with the indicator, headlight and neutral lights placed either side. I think the 250’s layout looks much smarter than its great big brother, the 1500cc Intruder. Come night-time the speedo dial is backlit in a sexy looking grey hue.
It took me a while to adjust to looking down so far to check my speed. But after riding the bike for a couple of weeks I did get used to the sound & feel that the engine made at 60-70 kph and didn’t need to look down as much. Sounds like a great excuse to give a policeman anyway. 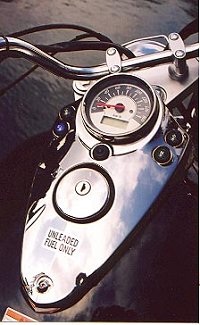 On the road the Kindergarten Suzuki cruiser rides the waves (potholes) of Sydney’s roads quite well. It’s a nice lightweight bike to move around at slow speed. The only drawback I found from being so light came when I was riding, err…. quickly through bumpy corners, the bike will start to wander out on a slightly wider line. It’s a light bike and this design style puts the front wheel a long way from the steering point of the bike (know as the ‘steering head’).

I don’t mean to put you off, cruise along like you should and you will never have trouble enjoying the corners. I was just being a twat and wanted to see what it would do, but it was all done in the name of research I tell you. Really it was.

A soft touch……
The front suspension offers absolutely no adjustment, which is actually good. This bike is aimed at the new to motorcycling person and if it had adjustment no one could resist the temptation to fiddle with a knob placed in front of them (I haven’t been able to control myself for years……ooh err).

The chrome twin rear shock absorbers have the very basic adjustment of spring pre-load. All that means is you can tighten the spring should you carry a heavy load (a pillion, bags or you could just be a fat bastard) and hopefully help the bike remain feeling like normal.

I took the little beast for a couple of 300 kilometre rides, only stopping once for fuel. The firm seat and soft suspension ensured my bum cheeks were perfectly alive upon completion of the ride, some bikes leave you with an amputated bottom feeling for hours after such rides. Underneath the wide seat is a great sized storage bin that easily fitted a pair of sneakers and cable lock, very handy indeed.

Get your motor running…..
The engine although small, is a simple neat over-head valve design with the cylinders placed in a V configuration.  Fuel is fed from a single carburettor mounted on its right hand side, just like it’s bigger American cousins. Cold or hot the engine fired into life with no problems.  I don’t like the fact that they have put the ignition key down by your left knee area (again copying the bigger bikes). This means you are forced to use the kill switch (red button on the right handle bar) to stop the engine.

A typically sweet Suzuki 5 speed gearbox and chain drive give power to the rear wheel. There is no centre stand only a side stand, so adjusting the drive chain (“what’s that?” says all novice bike riders) may mean a trip back to your dealer for help. But I would not call it a major dilemma with the bike.

The supplied power is good for an engine of its design and capacity. I did get the speedo needle showing just over 120 kph but I must admit,  it was straining all things mechanical at that speed and sticking to 80 kph (uncanny that’s the Learner and Provisional speed limit) was much nicer on the engine and the fuel consumption.

So sod the freeway, take the scenic route.

Talking of fuel, if you are a car driver converting to bikes you are gonna love this bike when you pull up to the pumps. I was getting around 240 kilometres each time from the 10-litre fuel tank.

Stopping the forward motion is done by a simple looking, but very effectively single front disc brake and by a drum brake arrangement for the rear wheel. I found nothing wrong with the function of the brakes at any speed or condition, so I won’t waffle on about them. They work and that suits me fine.

Looking back…………
Wrapping up the tale on the little Intruder (sounds more like a sex toy now) I say it’s a fine bike for around $6500. The quality of finish is good, nothing fell off the bike during the test and I grew to enjoy our rides together. Every time I parked the bikes I would have someone ask me about it, so she’s a little attention getter.

So sit your butt on the wide comfortable seat and go enjoy the ride. 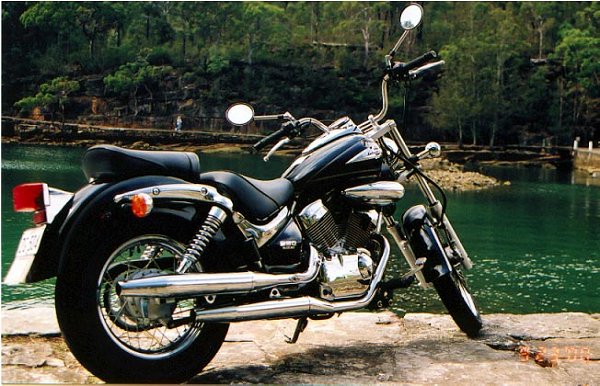