Villopoto from Reed in San Diego; Moss podiums in Lites

Villopoto from Reed in San Diego; Moss podiums in Lites

Yoshimura Suzuki’s Brett Metcalfe grabbed his first Nuclear Cowboyz® Holeshot of the season to start the Supercross Class Main Event with Villopoto and his Monster Energy Kawasaki teammate Jake Weimer in tow. Villopoto took the lead on the second lap while a battle ensued between TwoTwo Motorsports/Bel-Ray/Honda’s Chad Reed, JGRMX’s James Stewart and Red Bull KTM’s Ryan Dungey behind him. On Lap 3, Reed charged through the pack and made a pass on Weimer to assume second place. Shortly after, Weimer lost his position to Metcalfe.

Midway through the race, Stewart passed Metcalfe for third, but went down a few laps later in the whoops and handed over the spot to Dungey. Back in front, Reed and Villopoto were bar to bar, and on lap 18, Reed stole the lead, but was unable to hold it as the duo came up to the white flag. Reed went on to secure second place with Dungey rounding out the podium in third.

“The whoops were treacherous tonight,” said Villopoto. “I knew it was important to be consistent every lap. Battling Reed on the last few laps was exciting and I was able to make a good pass. I’m happy to keep the red plate on my bike and am excited for the Dallas race next week.”

Troy Lee Designs/Lucas Oil/Honda’s Vince Friese opened the Western Regional Supercross Lites Class main Event with the Nuclear Cowboyz Holeshot with Wilson trailing closely through the first turn. Wilson quickly passed Friese and held the lead for the remaining 20 laps. GEICO Honda’s Eli Tomac, who controlled the points lead heading into the night, started mid-pack and charged his way to third place, however on lap seven, he crashed in the whoops to surrender his podium spot and points lead. With Tomac crashing out, JDR KTM’s Matt Moss moved into third place to secure his squad’s first podium of the season behind Troy Lee Designs/Lucas Oil/Honda’s Cole Seely.

“I’m absolutely ecstatic with the win,” said Wilson. “I knew I needed to run consistent laps out there and get through the whoops as fast as I could all night long. Eli [Tomac] is a tough competitor, so it’s a bit of a surprise to be in the points lead, but I’m going to work my butt off during the break to try and stay there.”

The Australian, who led his heat race from start to finish didn’t get a great start in the ‘Main Event’ but charged through the field and into second place on Lap 3 of the 20-lap contest.

As the race unfolded, Reed began to close in on race leader Ryan Villopoto and after a bar-to-bar battle with his rival, he moved into lead on Lap 18.

“I am really happy that I rode 20 solid laps tonight,” Reed said.

“Ryan (Villopoto) started to gap me on laps 9 – 11 and I found myself being lazy in the turns.

“He races for it on every inch of the racetrack so I said to myself quit being lazy and get out there and fight for this thing,” he continued.

“The changes that we have made through these West Coast events have been good. I am excited to be heading back to Florida with a good solid 20 lap race under my belt,” Reed added.

Reed will now return to his Florida base and prepare for Round 7 of the Monster Energy AMA Supercross, the first of the East Coast events, at Arlington’s Cowboys Stadium on Saturday February 18.

Red Bull/KTM Factory rider Ryan Dungey put his KTM back on the podium at the sixth round of the AMA Supercross Series in San Diego’s Qualcomm Stadium to register his fifth podium. He is currently third in the season’s standings and trails leader Ryan Villipoto by just 10 points.

Dungey was placed in the second SX class heat where the first attempt red flagged after three laps. He dug in and went on to finish third after the restart.

He got away well in the main event to be top five around the first corner but then made a small mistake in the first rhythm section and fell back to fifth. He sat it out there until lap seven but when James Stewart went down he advanced to fourth then made a quick pass on Brett Metcalfe. He then maintained third place right up to the flag.

“I struggled a little bit tonight in some sections and it held me back from fighting for the top spot. Overall, I am glad I was able to get on the podium and salvage some points but I need to battle for the win to help my fight in the championship chase. I am looking forward to heading east and hoping to run up front next weekend,” Dungey said after the race.

In the Lites it was also a good night for Australia’s JDR/JSTAR/KTM rider Matt Moss of Australia who also finished third to grab his first podium. However not so lucky was Dungey’s Red Bull KTM factory teammate Marvin Musquin who did well to survive a nasty first round crash in the main event to salvage points. He is currently fourth in the season’s standings.

Musquin impressed the sizeable crowd in his heat race earlier in the day where he earned a great jump off the start o finish second and easily secure a top spot in the main event. But he got pushed back at the start, was seventh at the first cover and was heading for top five when he came unstuck in the back rhythm section. Musquin fell hard and took a moment to recover, then returned to the mechanics area to make some adjustments before rejoining the action a lap down on the rest of the field. He quickly set to work to try and pick off any riders he could and did well to finish eventual sixteenth.

“This is definitely a disappointing race because I lost a lot of points toward the championship. The good thing is I walked away uninjured and will not be set back at all from my crash. I plan to race a few east coast rounds on the KTM 350 SX-F and I am looking forward to those races and mixing it up with a new class of riders,” stated Musquin after the race.

Musquin has confirmed that he will race both the St. Louis and Daytona Supercross races in the premier class riding a KTM 350 SX-F and possibly one other round as well.

JGRMX Yamaha’s James Stewart missed out on another podium finish at the Qualcomm Stadium in San Diego last Saturday when the former champion crashed through the tricky whoops section of the course that entertained round six of seventeen in the AMA Supercross series (also an FIM World Championship).

Stewart recovered from a mid-pack start in the 20 lap main event to make several sharp overtaking moves and force his way to third place. It was on the sixth circulation when the slip occurred, and a crowd of 58, 782 spectators saw the Floridian hit the ground luckily without injury. Stewart was actually able to remount and although a lap down reached the flag in fifteenth for a few points.

“We had a good practice and I had an OK start in the main – top ten somewhere – I made my way up and got into third place and ended up going down in the whoops,” he recounted after the final Californian stop on the calendar. “I don’t know what happened, I was just riding and doing my thing. I was on my head so quick. I was stuck under the bike – completely stuck on something. I was trying to pull it off, and finally a guy pulled his knife out and cut me out and I got going. A little bit frustrating but we will go back and keep on working. I appreciate all the fans sticking behind us. We’ve got a lot of races left so we will continue getting better.”

Reigning Champion Ryan Villopoto rode to his second win in succession and heads the standings. Stewart is fourth and 32 points in arrears.

Monster Energy Yamaha’s Zach Osborne may have left the West Coast Lites competition but Yamaha were well represented at the Qualcomm by Star Valli Yamaha’s Gareth Swanepoel. The former Grand Prix racer took his YZ250F to a career-best fourth position. In what is his first full season of SX racing the South African classified just in front of team-mate Nico Izzi. “Supercross is a whole different ball game and I’ve been trying to find my feet but tonight I proved to myself that I can run the pace for a full 15 laps,” he said. “The whoops were really gnarly but I used them to my advantage and could hit them consistently each lap.”

“My goal is to finish the West coast series healthy so that I can go into the MX season strong,” he added. “A podium finish in the SX Lites would be awesome and that has to be the next step.”

Round seven of the series (and the first outing for the East Coast Lites campaigners) will take place at the Cowboys Stadium in Arlington, Texas next Saturday. 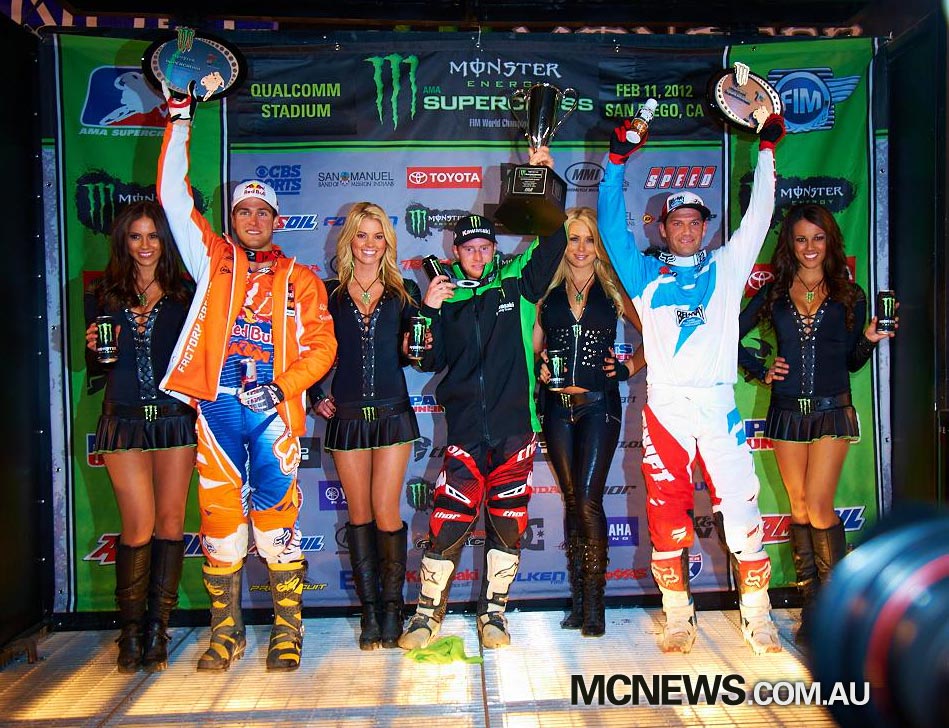 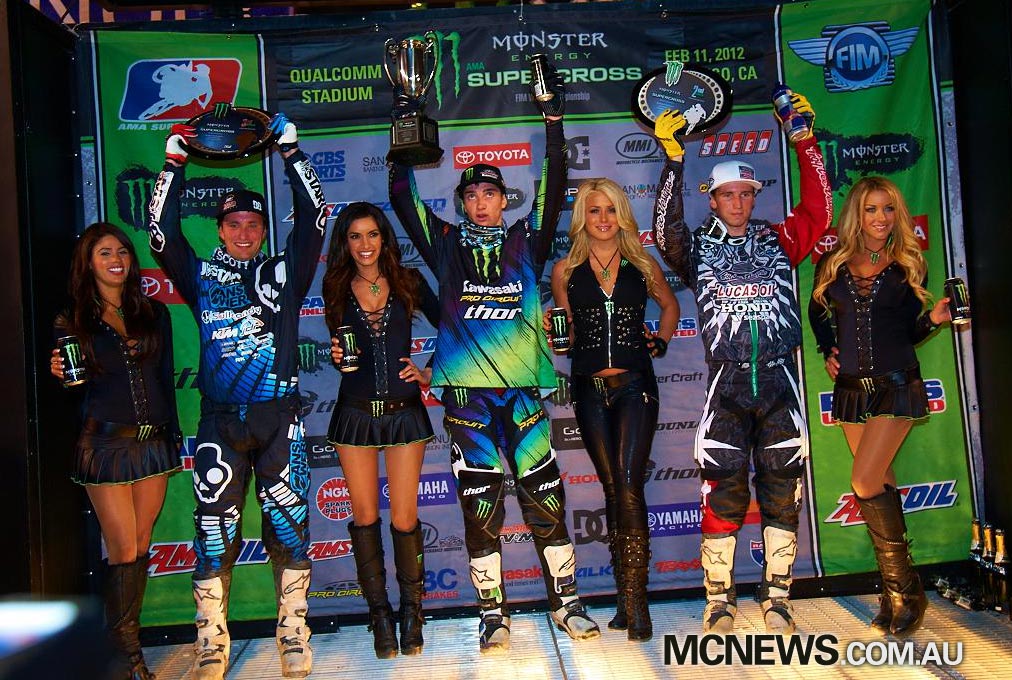