Dunlop Supersport 300 Qualifying and Race One

Ben Baker topped the Supersport 300 opening qualifying session with a 65.591 to Angus Grenfell’s 66.167 and Zack Johnson’s 66.263. Baker was happy to sit on that time and did not take to the track as that was good enough for pole.

Ben Baker then did a 1m10 from a standing start when the lights went out to start the opening Supersport 300 bout of the weekend on Saturday.

He then backed it up with a 65.064 to smash the category lap record and had a five-second lead by the end of that second lap.

Baker took victory by 7.5-seconds over Zack Johnson while Reece Oughtred broke through for a podium result after getting the better of Archie McDonald. 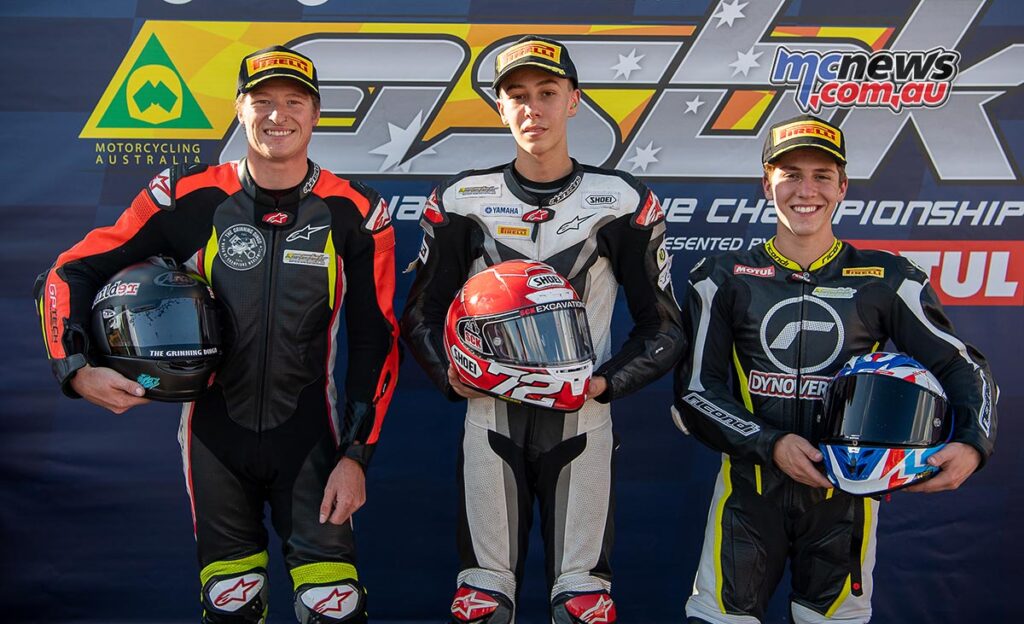 Ben Baker led Angus Grenfell and Zack Johnson on the opening lap and that trio stretched a small gap over their pursuers by the end of lap one. The second group headed by Reece Oughtred, Cameron Dunker and Archie McDonald battled over fourth place early on.

Zack Johnson and Angus Grenfell got down to a serious tussle over second place while Ben Baker started to pull away to a clear lead.

Baker consistently lapped a second quicker than the rest of the field, lowering the lap record further to 64.780 halfway through the race to stretch his lead out to over four-seconds with four laps still to run.

Baker continued to pull away and had a lead of almost eight-seconds at the chequered flag while Zack Johnson won the battle for second place over Angus Grenfell.

Archie McDonald won the contest amongst the next group to claim fourth place ahead of Cameron Dunker and that pair managed to break away from the sixth placed Reece Oughtred over the final laps.

Ben Baker just lit the fuse in this one, seven-tenths ahead of Dunker by the first split, nine-tenths by second split and a full-second ahead by the end of that opening lap.  Simply stunning and in a race of his own.

In the race for second place it was Zack Johnson, Cam Dunker, Angus Grenfell, Reece Oughtred and Archie McDonald.

Zack Johnson eventually broke away from his pursuers to stake his claim on that second place while Cam Dunker and Angus Grenfell tussled over the final step on the rostrum.

Ben Baker took the chequered flag six-seconds ahead of Zack Johnson while Archie McDonald was very disappointed to lose out on a podium result by a nose to Cameron Dunker.

Baker the dominant round victor with a perfect 76-point haul and now leads second placed Johnson by 35-points after only two rounds. Reece Oughtred is third in the championship chase a further three-points behind Johnson.

The Supersport 300 category will not race again until late August at Morgan Park.

Images from the 2021 ASBK finale at The Bend | Gallery J

Images from the 2021 ASBK finale at The Bend | Gallery I

Adam Cianciarulo ruled out of remainder of AMA SX season