The penultimate Race of the 2016 Motul FIM Superbike World Championship got off to a shining start under the stars and floodlights of the Losail International Circuit. Chaz Davies (Aruba.it Racing – Ducati) won the race in dominant style with a 3.9-second margin over the newly crowned 2016 World Champion, Jonathan Rea (Kawasaki Racing Team). 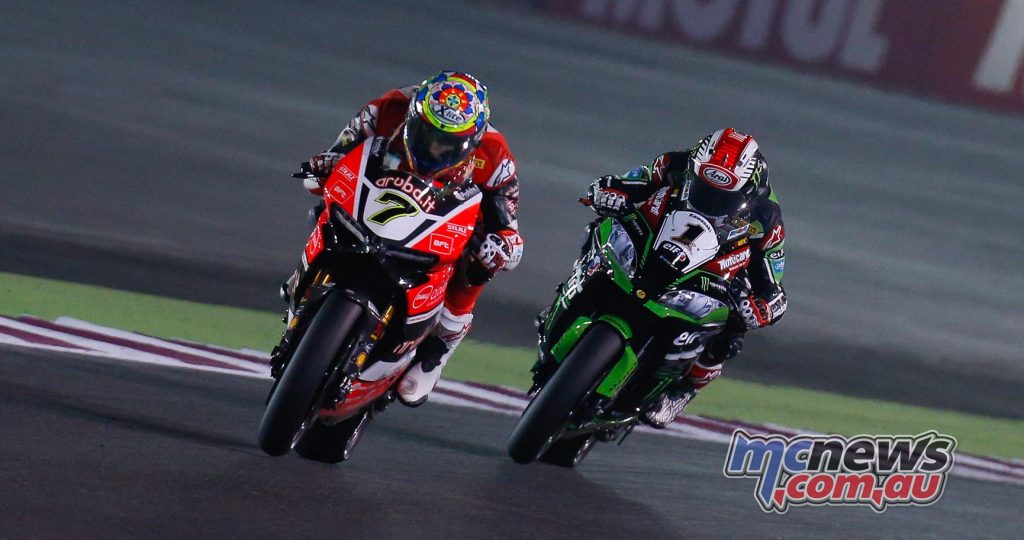 The Northern Irishman wrapped up his second consecutive title with a stunning second place finish at the desert circuit and now joins the ranks of Carl Fogarty, Fred Merkel and Doug Polen as a consecutive WorldSBK Championship winner.

Davies got off to a flying start, leading into the first corner with Nicky Hayden (Honda World Superbike Team) overtaking Rea on entry to turn 1. Rea was quick to fight back and retook his position in second, with his sights set on Davies in first. Championship contender Tom Sykes (Kawasaki Racing Team) didn’t get his best start, after an uncharacteristically bad qualifying in fifth saw him only make up one place at the beginning of the race.

By lap 3, the struggling Yorkshireman was overtaken by Sylvain Guintoli (Pata Yamaha Official WorldSBK Team) and dropped back to fifth as his title chances melted away as he fell behind. Guintoli’s incredible pace didn’t falter as he pushed ahead to hunt down Hayden who was sitting third and by lap 8 the Frenchman got into third, to settle into Yamaha’s maiden podium position finish.

Jordi Torres (Althea BMW Racing Team) came home in eighth, ahead of Michael van der Mark (Honda World Superbike Team) in ninth. Lorenzo Savadori (IodaRacing Team) finished in tenth with Leon Haslam (Pedercini Racing) coming in close behind in 11th. Haslam had a great start, finishing the first lap in 11th from 16th on the grid and continued progressing to fight in top ten on the following lap, before finally dropping back again to his finishing position.

While Rea and Davies celebrate their wins on Saturday night, Sunday will be a new day and the final 25 points are up for grabs. Race 2 will see lights out at 21:00 local time (GMT+3) for the final showdown of the 2016 season. 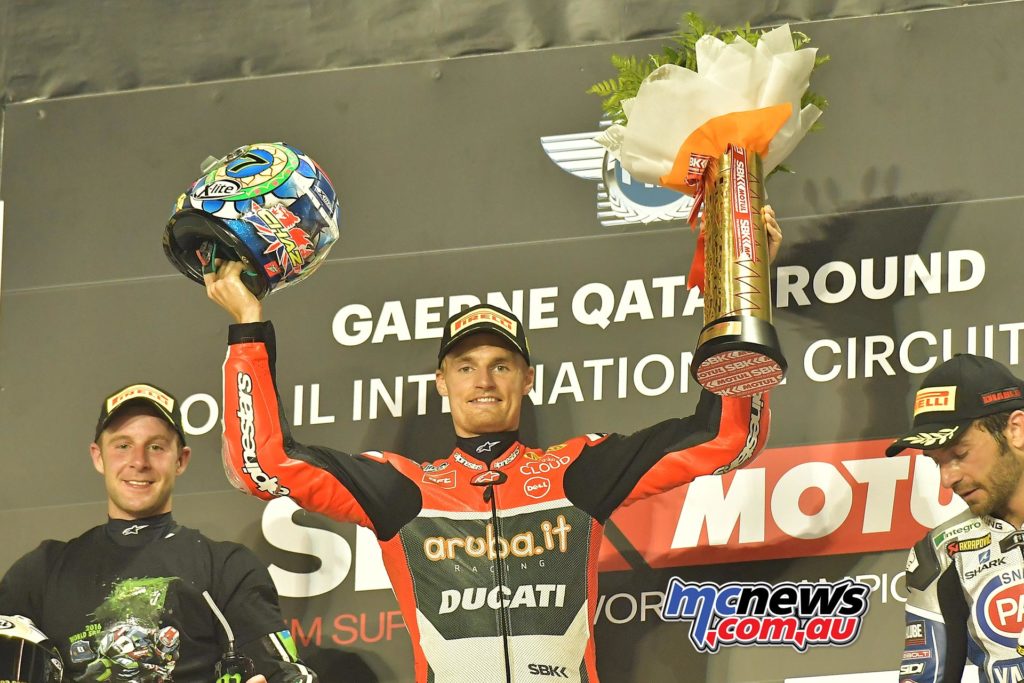 “The pace was mega! 1’57s, 1’57s, it is pretty quick around here on a Superbike. So I was really surprised at that and also I was not exactly sure how the last laps were going to play out. At that sort of pace it can have a knock-on effect with the tyres. But anyway, I brought it home. I was watching the gap to Jonny, I could see it was 0.3s, 0.4s, 0.5s. I was not really going anywhere and then I squeezed it a little bit more and tried to see if I could get the last drops out of it. I managed to just start breaking away. It’s really good I’m very, very happy and we will see if we can repeat it tomorrow.” 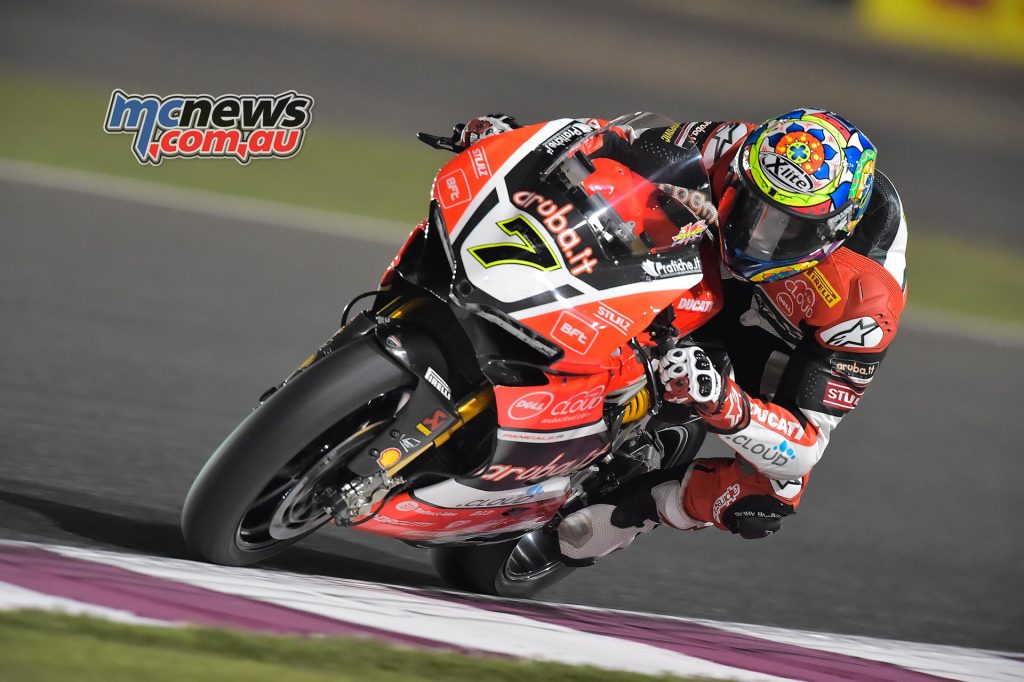 “Honestly it is more special than last year, in different ways. Last year the championship just happened as a result of some amazing rhythm throughout the year. It wasn’t easy but it happened naturally. This year we really had to work hard for it. I had to really win this championship. I just want to thank everyone in my corner, my team, KHI, my family, the mechanics, all my fans out there who have been supporting me through the tough moments of the season. I feel so much confidence from this year, because this 2016 Kawasaki ZX-10R is like my son! It’s the first year. I am so proud to give Kawasaki the World Championship in the first year with a new bike. It bodes well for next season!”

“Well it’s been a difficult year, especially for me, being in hospital quite a bit and recovering for most of the year. So since I got back we have been building back up the rhythm and the speed. Today I felt like the riding was really good. I really enjoyed myself. We managed to get the tyres to the end. It was good, it was a good race. Good work. After this year this first podium with Yamaha it’s symbolic and it’s really good for me.” 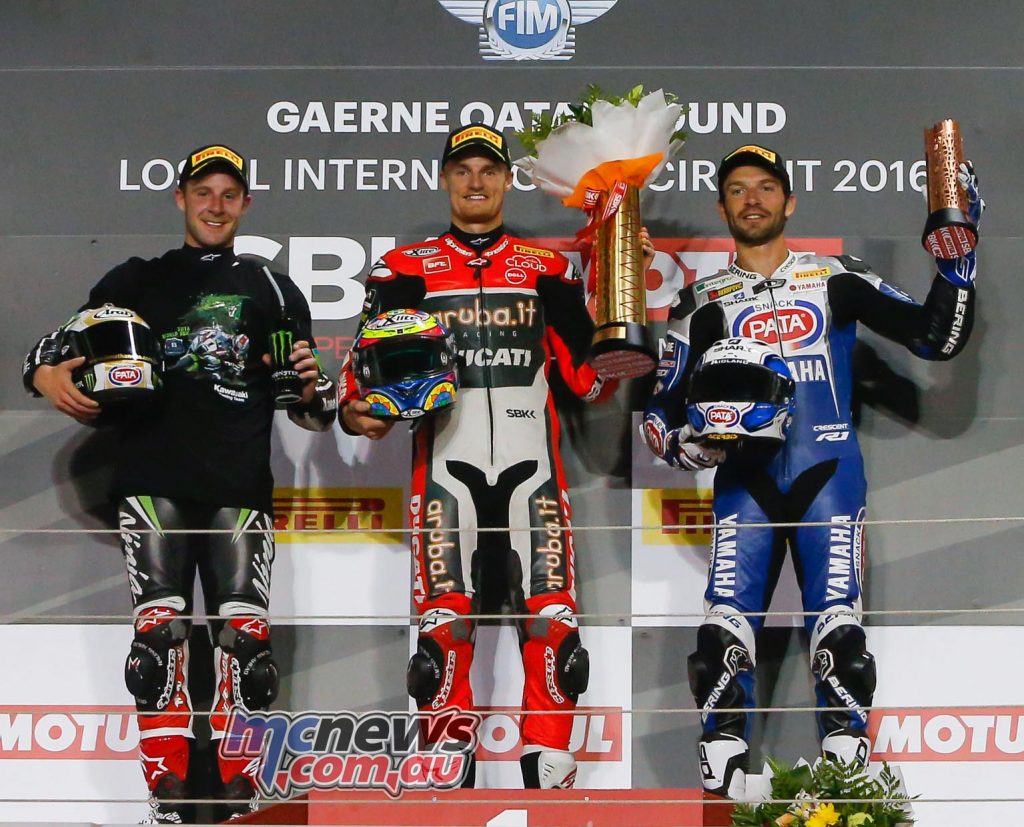 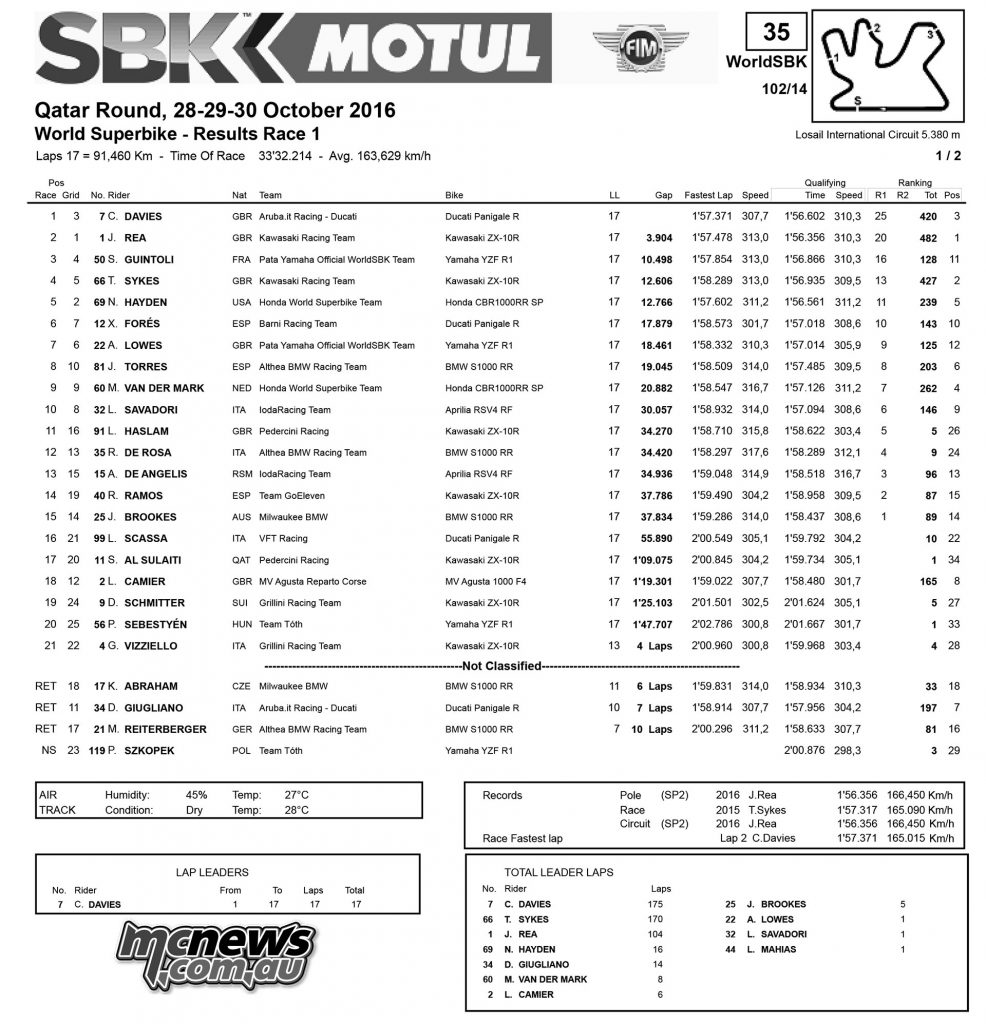 Championship Standings after Race 1, Round 13

Luke Stapleford (Profile Racing) turned his Friday fortunes around to take pole position on Saturday for his first time, after graduating from Tissot-Superpole 1 earlier in the evening. The Brit finished 17th overall on Friday and was able to completely turn things around in the second session to secure the front row start. 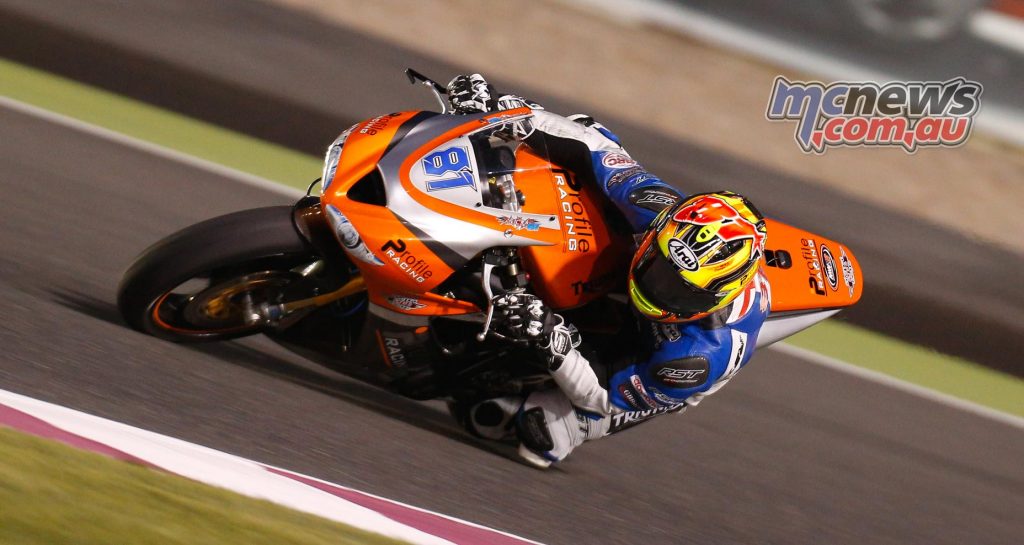 Reigning Champion Kenan Sofuoglu (Kawasaki Puccetti Racing) qualified in second, while his teammate Randy Krummenacher finished in third, after having also set the fastest pace on Friday. The Swiss rider was the quickest of his rivals for the overall runner-up spot to qualify, giving him the advantage heading into the final race on Sunday.

With track temperatures at a prime 32 degrees at the beginning of the session, WorldSSP riders were able to set their fastest times in Superpole 2. Alex Baldolini (Race Department ATK#25) continued his good pace into Saturday evening and qualified fourth, ahead of last year’s Qatar winner, Kyle Smith (CIA Landlord Insurance Honda) in fifth.

2016 runner-up contender Jules Cluzel (MV Agusta Reparto Corse) qualified in sixth, ahead of Zulfahmi Khairuddin (Orelac Racing VerdNatura) in seventh, who graduated from Superpole 1 earlier in the evening. Ayrton Badovini (GEMAR Balloons – Team Lorini) will be starting Sunday’s race from eighth on the grid, while Honda World Supersport Team’s PJ Jacobsen will have to work hard on Sunday to catch his rivals, after he qualified in ninth.

The stars of WorldSSP will be back on track for the ultimate Sunday clash on the 30th of October at 19:15 local time (GMT+3), where Krummenacher, Cluzel and Jacobsen will go wheel to wheel to finish the season in second overall.

“It is something that I never expected. We had a few problems yesterday like I have mentioned a few times before. This morning obviously we knew we had found something. We used a harder tyre and we managed to get in a good rhythm so we knew when we put the soft tyre on for qualifying we could find a bit of pace, but we weren’t certain on even getting into SP2 so to top it off with pole is really unexpected. I want to give a big thank you to the guys. We’ve worked really hard this year, we have had to learn a lot of new circuits so this sets us up well for tomorrow and going into next season.”

“Last year especially I was very fast at this track. This year I can’t say we are really far away, that we made the bike perfect. But I think the bike is on a good level and we are ready.”

“It wasn’t actually a really good Superpole lap. I struggled a bit today. We have some more grip but we sort of can’t use it and I’m sure we can use it better. We are on the front row, it is good for the race. I am confident and for sure we can improve for tomorrow. So let’s race!” 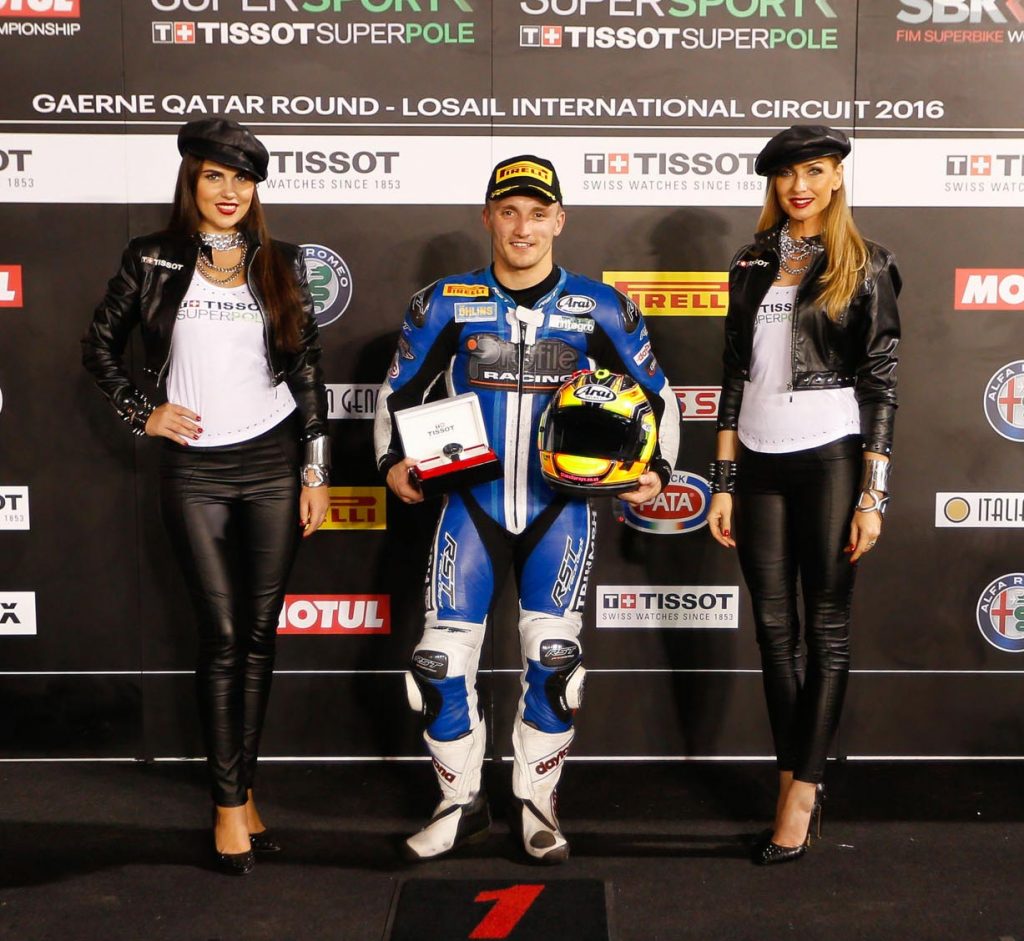 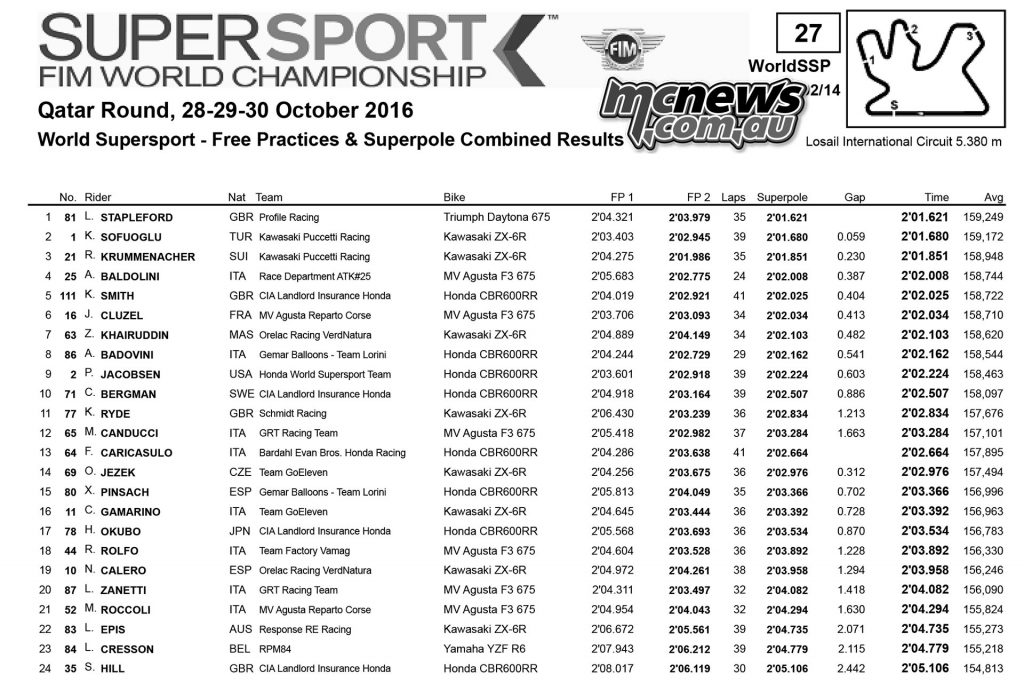 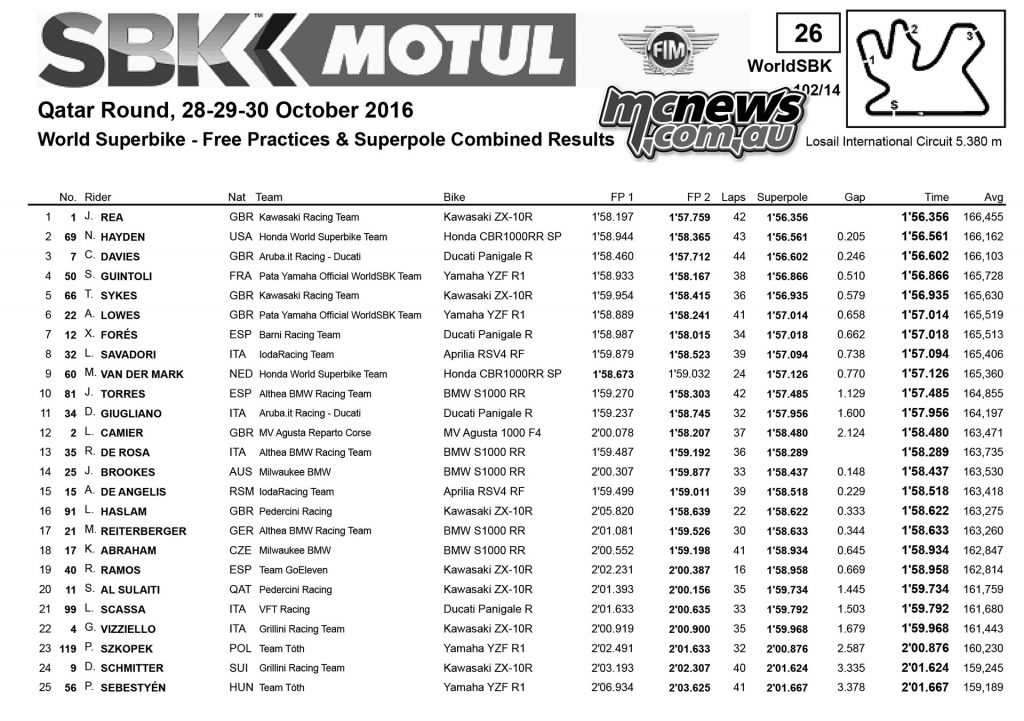