Chaz Davies dominates in Germany with Race One victory

As the riders enjoyed their first race since the summer break it was Welshman Chaz Davies (Aruba.it Racing – Ducati) who produced a superb ride at the Prosecco DOC German Round on Saturday, taking victory by a 1.834s margin from Jonathan Rea (Kawasaki Racing Team), with Tom Sykes (Kawasaki Racing Team) also on the podium. 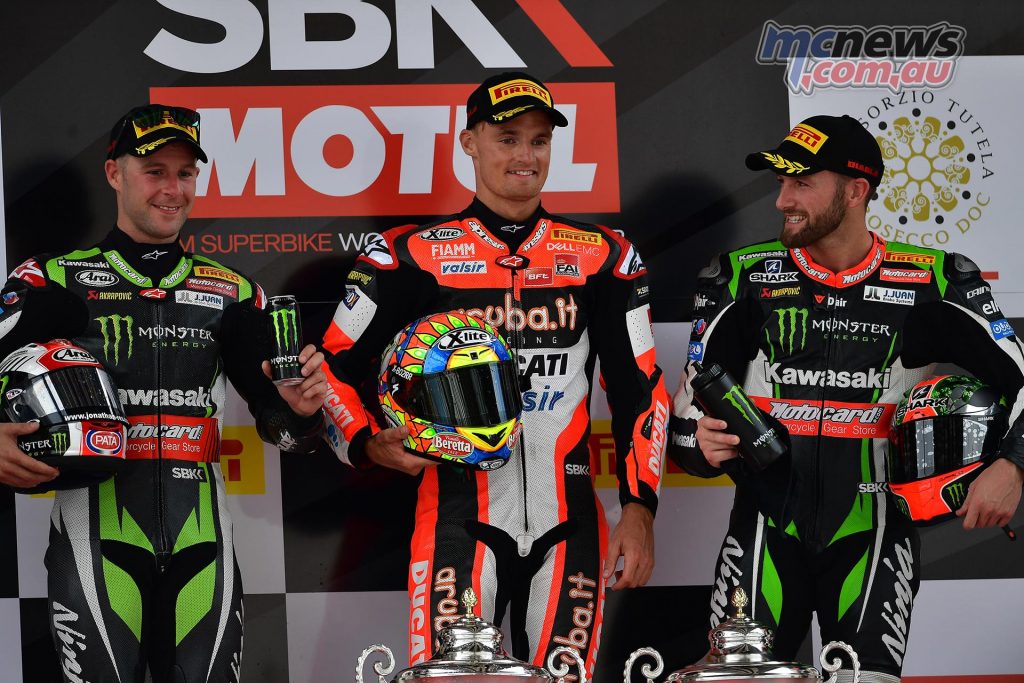 Repeating his Race 1 victory from Lausitzring last year Davies controlled the race well after starting in third on the grid, taking the lead on the second lap. He was too strong for Rea and Sykes despites their best efforts to chase him down.

Sykes had set a new pole record earlier in the day but could not match Davies’ race pace and crossed the line in third place, 3.25s down on the Ducati-equipped race winner. 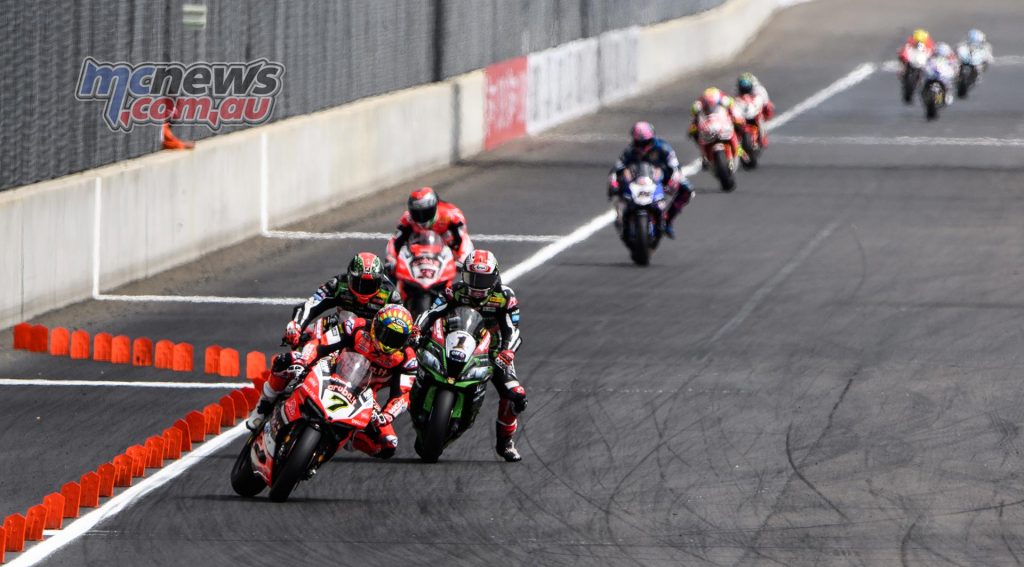 The Saturday contest at Round 9 in Germany saw Marco Melandri (Aruba.it Racing – Ducati) cross the line in fourth place, 16 seconds down on his teammate Davies, with Leon Camier (MV Agusta Reparto Corse) getting a creditable fifth place as he finished half a second behind Melandri.

Alex Lowes (Pata Yamaha Official WorldSBK Team) put pressure on Camier for fifth but just missed out by 0.186s as the highest finisher on the YZF R1.

On his WorldSBK return wildcard Markus Reiterberger (Van Zon Remeha BMW) was running in a solid eighth place for much of the race before he ran into the gravel at turn 10 and dropped down the order to eventually finish 13th.

Stefan Bradl (Red Bull Honda World Superbike Team) was forced to sit out due to pain in his left elbow, after crashing on Friday and having a further medical check following Superpole on Saturday morning. His condition is to be evaluated again on Sunday morning before Warm Up.

“The sighting lap was pandemonium, I nearly high-sided going into the last corner because of an issue with the rear brake. That made for a few tense minutes on the grid, because usually you can’t fix something like that in such a short time, but I have a good crew and they fixed to almost entirely, so it was good enough to allow me to do what I needed to do. Then, I got a great start and found myself in a good position in the early laps. Once I took the lead, I just tried to set my pace without looking at the lap times and we came out on top. The rhythm was good, but there is still room for improvement ahead of Race 2. We’ll start from 9th position but I think this track offers opportunities for overtaking and we’ve worked on our starts recently, finding more consistency, so I’m in for another interesting race.” 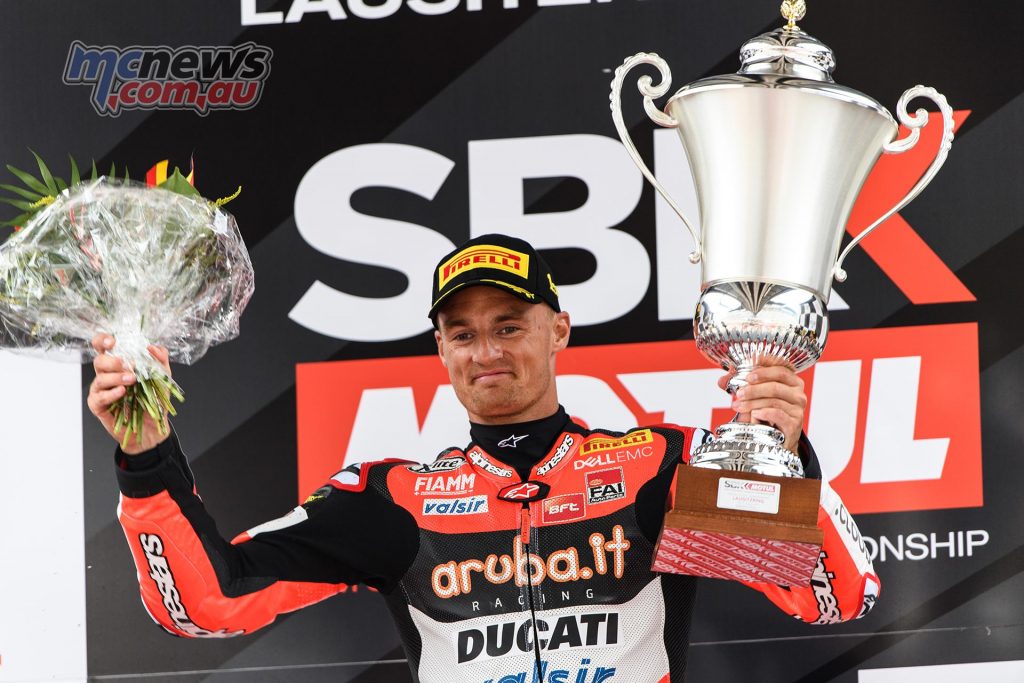 “Chaz gifted us with a very emotional win today, because it was a result of both his heart and his brains. After the issues encountered in the sighting lap, it wasn’t easy to stay calm but, thanks also to great teamwork, he managed to regularly start the race and dictate his pace from early on. Unfortunately, Marco struggled more with the bumps and, after a few laps, he was forced to drop the pace a bit. It’s never easy to do a double, but we’ll try our best to put both our riders in a position to win tomorrow.” 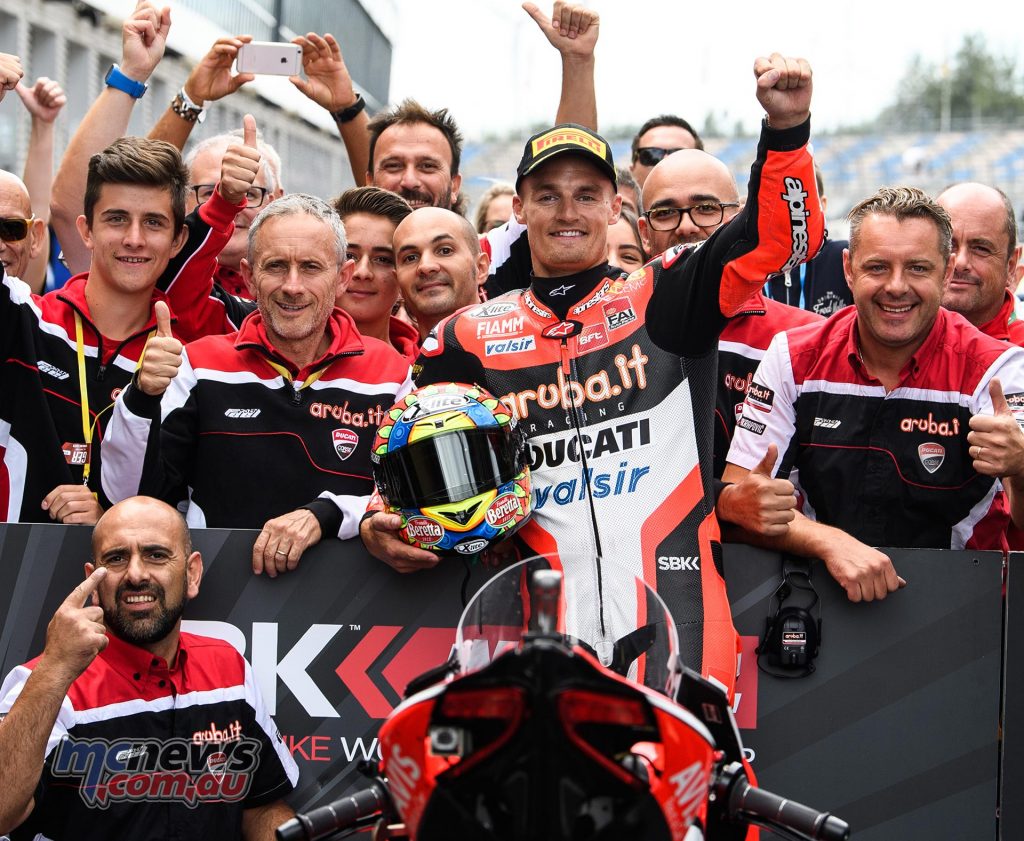 “In the beginning and middle parts of the race I felt I had the pace to be with Chaz. Following him, I did not know exactly where I was going to be strong enough to make a pass to make my own race. I just tried to say stay there as long as I could and hope that the gap would open up behind. Then I started suffering with the right hand side of my rear tyre. I was starting to struggle to make the lap times and through some of the right-handers I felt on ice a little bit. I just had to manage my own race, and the guys gave me incredible pit-board signals. When Chaz was eking out a gap there was nothing I could do to win. So I put all my effort into keeping a solid rhythm and preserving the tyre for the last laps. Until we all put our heads together and look at the data we will not really know if we chose the correct rear tyre option today. It has been such a tough weekend because of the conditions, and all the rain we have had. But the pace today was still much faster, on a green track, than last year’s race, or even my race simulation during the test here in the summer break. Hopefully it will not rain again so much tonight.”

“I got a strong start and the lap times were good but our main rival had something extra compared to all the practice, so we just missed out. Whether it was a tyre choice, as we went for the softer option, but the only thing I was struggling with in the race is that I was not able to get of the corners as strongly as I wanted to. We will have to look at this for tomorrow but overall I am just disappointed not to convert the pole position into a win today. But Chaz and Jonathan were riding strongly and compared to last year the lap times were much faster. In Superpole the bike itself was working really nice, really consistent and it did pretty much what I wanted it to.” 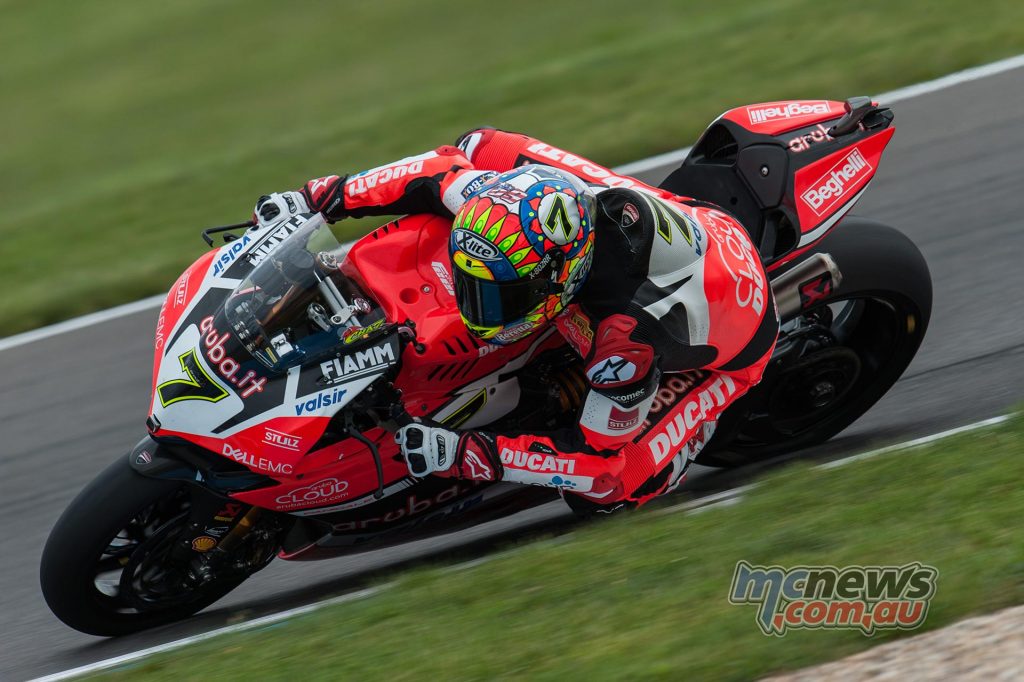 “It wasn’t an easy race for us. In the first few laps we managed to stay within the leading group, but as the rear tyre dropped our bike started to wobble too much over the bumps and I was forced to ease off the throttle, losing contact with the riders ahead of me. At first, I tried to compensate by braking later to make up for it but, the harder I pushed, the more mistakes I made, and I almost lost the front a couple of times. Our pace was in the high 1:37 mark today, we couldn’t do more and it wouldn’t have been smart to take more risks. Tomorrow we’ll try some setup modifications during WUP. The goal is to stay with our rivals for the whole race.” 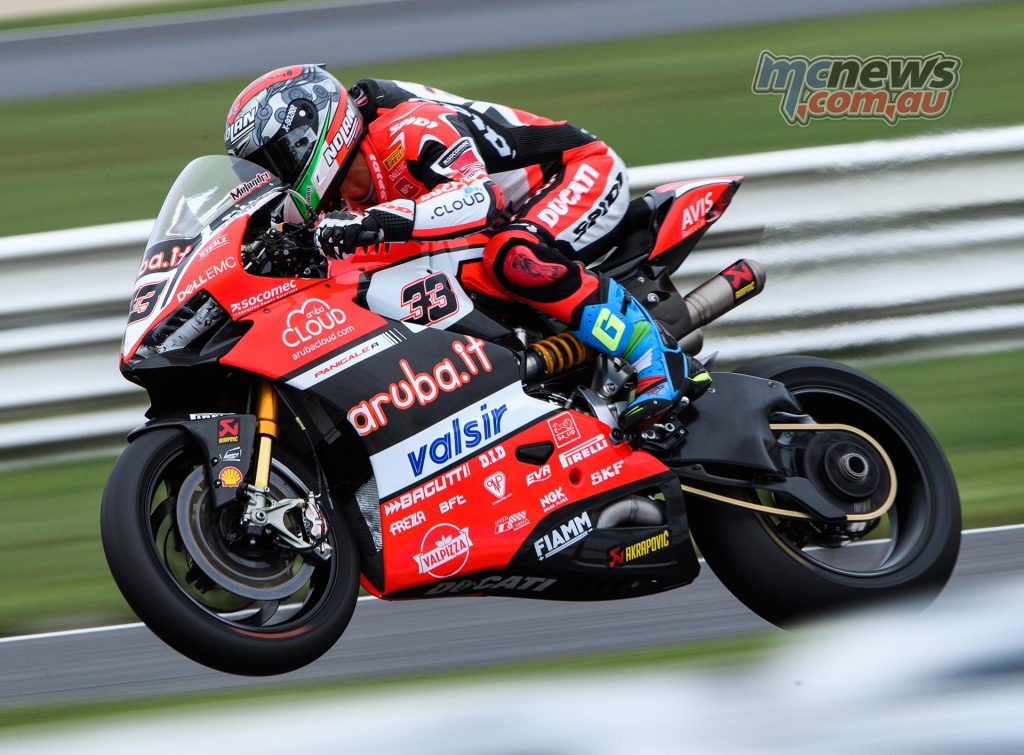 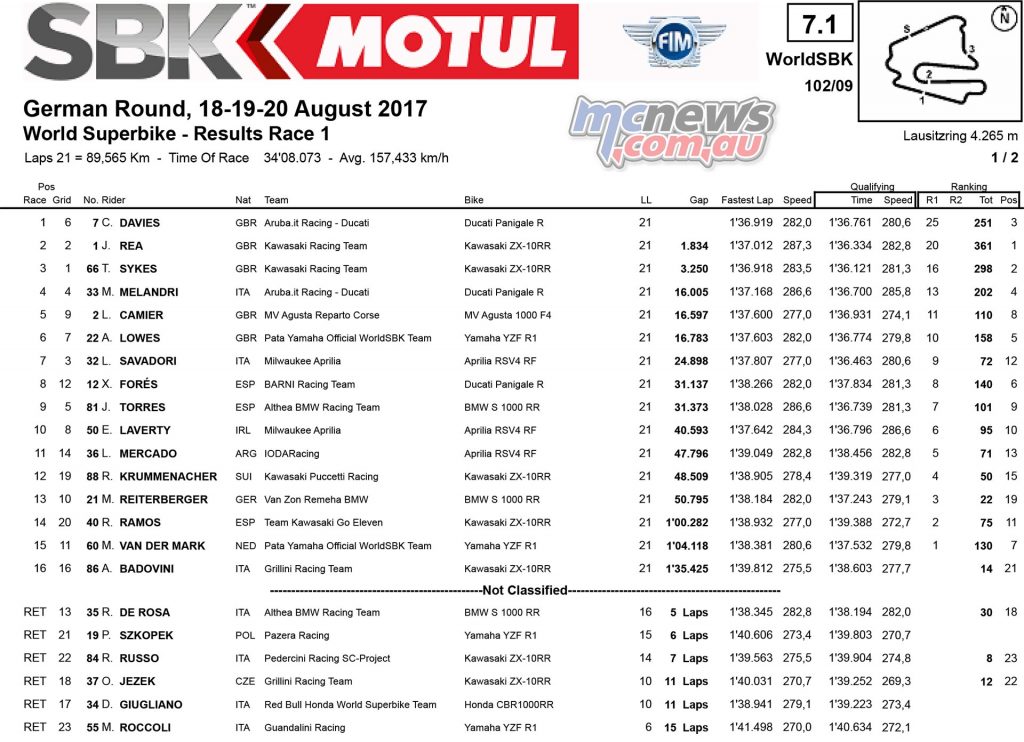 Championship Standings after Race 1, Round 9

Federico Sandi on pole in STK1000 class at the Lausitzring, in front of Scheib and Rinaldi

It is a career-first pole for former WorldSBK rider Sandi and it arrived courtesy of a 1’38.268 lap around the 4.255km Lausitzring circuit, a time which put him 0.342s ahead of closest challenger Scheib.

Aprilia-equipped Scheib was fractionally faster (0.045s) than standings leader Rinaldi, who slotted in to third place on his Ducati to complete the front row. 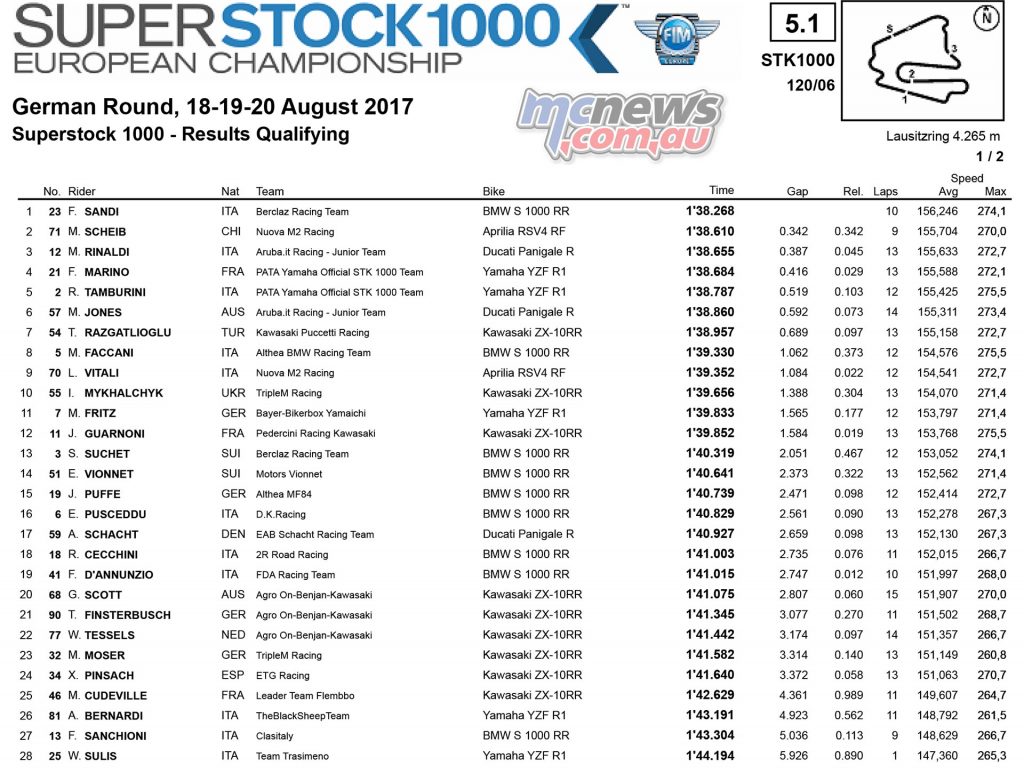 At the Prosecco DOC German Round on Saturday afternoon Sheridan Morais (Kallio Racing) cashed in on his good pace so far this weekend to grab his first ever WorldSSP pole, ahead of fellow front row qualifiers Federico Caricasulo (GRT Yamaha Official WorldSSP Team) and Niki Tuuli (Kallio Racing).

Morais produced a fine 1’40.440 lap in Tissot Superpole 2 to put him at the head of the grid for Sunday’s race, with Italian rider Caricasulo 0.065s behind him in second place. From the other side of the Kallio Racing box Morais’ colleague Tuuli made it a great day for his team to round out an all-Yamaha row one.

On the fourth row it’s Hannes Soomer (WILSport Racedays) in tenth place, in front of Hikari Okubo (CIA Landlord Insurance Honda) and Gino Rea (Team Kawasaki Go Eleven). Towards the end of the session Rea crashed but was not too adversely affected.

In SP1 Soomer topped the timesheet with a 1’41.519s lap and he was joined in graduation to SP2 by Zanetti

“Really happy to get the pole position and we have made a small improvement with the new bike, which has made a big difference. We are feeling really comfortable here in Germany and we have a chance to fight for the victory tomorrow.” 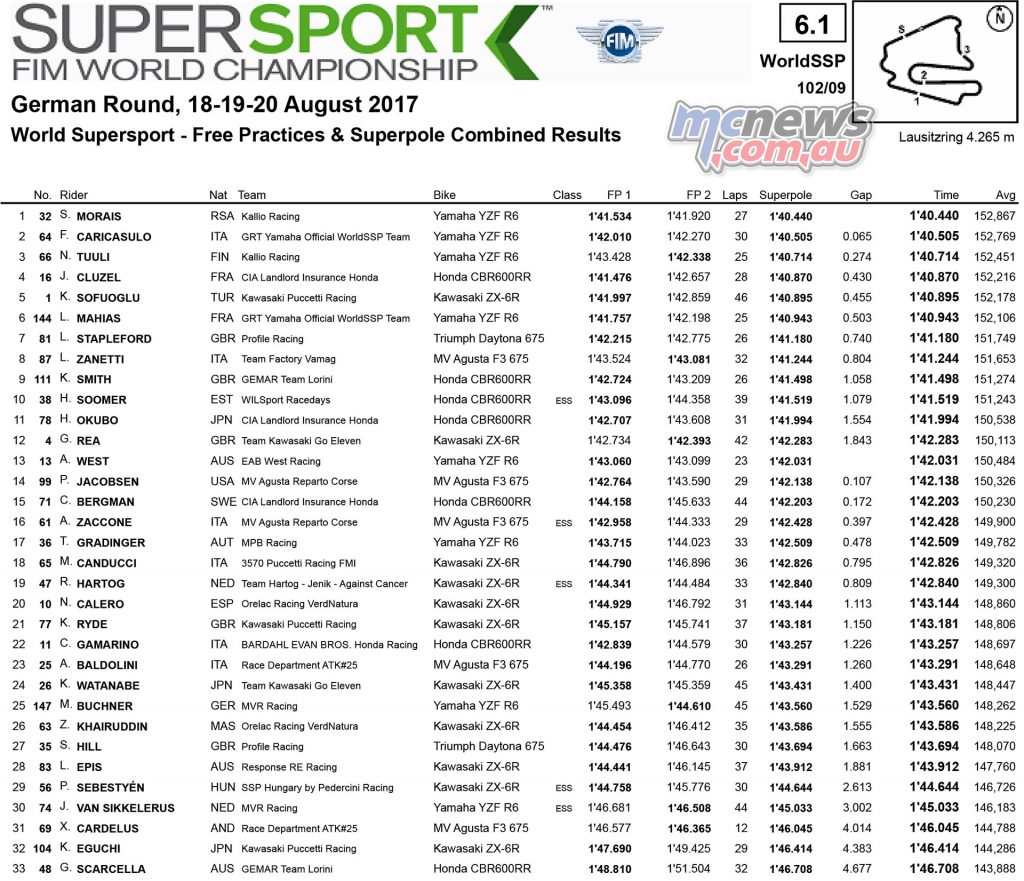 Alfonso Coppola (SK Racing) will start from pole position in the FIM Supersport 300 World Championship, as the championship returns for their sixth round of the inaugural season, in a competitive qualifying session at Lausitzring.

Superpole one began at the Prosecco DOC German Round with all riders keen to get out on track as the 15 minute session began. Borja Sanchez (Halcourier Racing) was the first rider to set a competitive lap time around the 4.265km circuit, dominating the opening half of the session. Unchallenged for the top spot, Michael Carbonera (SK Racing) secured second position in the closing three minutes, just 0.380s behind the Spanish rider. However a stunning lap from Indonesian rider Ali Adriansyah Rusmiputro (MVR Racing) as the flag went out saw him shoot into first position with a lap time of 1.57.009, taking him automatically into Superpole Two.

As riders went out for the all important Superpole Two and the dash for pole, Robert Schotman (GRT Yamaha WorldSSP300 Team) was the first rider to set a strong lap time, and it was a highly competitive session around Lausitzring. A strong fight for pole position ensued, with six riders sitting in provisional pole. Ultimately it was Coppola who took the top time with a lap of 1.55.665, ahead of Mika Perez (WILSport Racedays) in second position after the Spanish rider was caught up in traffic. Marc Garcia (Halcourier Racing) completes the front row, 0.730s off the pole position. Giuseppe De Gruttola (SK Racing) will head the front row, ahead of Ana Carrasco (ETG Racing) who was able to lead the session mid-way through as Gabriel Noderer (Scuderia Maranga Racing) ended the session in the top six.

Relive all the exciting WorldSSP300 Superpole sessions with the WorldSBK VideoPass, ahead of race which kicks off at 14.20LT on Sunday, as 35 riders take on the German circuit of Lausitzring for the first time.

“It was a difficult qualifying session, with a lot of riders out on track but I was able to keep calm and set a strong lap time. It’s not the race, so you don’t need to worry about scoring points and I am so happy to have secured pole position. I want to say thank you to my SK Racing team, and I am looking forward to the race tomorrow.” 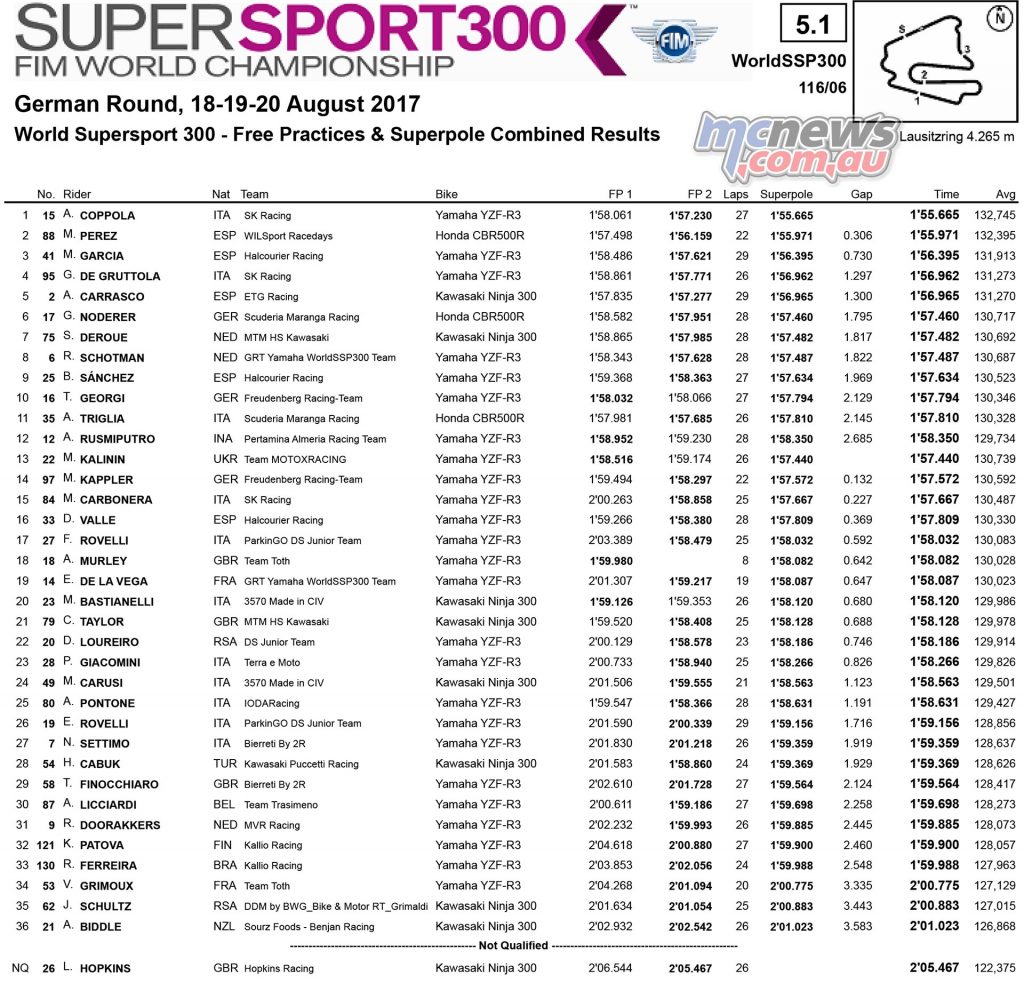