Superbike World Championship riders took to the 34-degree Thai heat for free practice two, as they battled it out for the final spots in Superpole 2, which will take place before Saturday’s opening race at the Chang International Circuit.

Setting the fastest time in the morning FP1, Jonathan Rea (Kawasaki Racing Team) continued his impressive pace around the swooping 4.554m circuit. Ending day one on top, his time of 1.33.573 out him 0.210 ahead of the field and is already looking like the man to beat.  Whilst Tom Sykes (Kawasaki Racing Team) was able to put in a late fast lap to take second position with a time of 1.33.783. On the opening day of the second FIM Superbike World Championship round of the season the official Ninja ZX-10RR riders proved to be a step ahead of their rivals, with both Rea and Sykes under lap record pace with their respective best laps. Rea’s 1’33.573 put him 0.210 seconds ahead of Sykes, with both riders improving their morning lap times this afternoon despite a significant increase in track temperature at the 4.554km long Thai circuit. Today the Buriram asphalt was fully ten degrees warmer in the afternoon than the morning. With these hotter conditions the most likely ones to be experienced in the two 20-lap races on Saturday and Sunday, both Tom and Jonathan worked on finding a race set-up, before going for a faster qualifying lap.

Overall track conditions are much improved compared to last year, when two sections of recently resurfaced asphalt had to be avoided by the riders. With the freedom to use the whole track surface, and good grip from the track even despite some recent heavy rain, lap times were fast and consistent from the beginning today.

On Saturday 11th March FP3, Superpole 1 and 2 and then the first race of the weekend will take place, with Rea and Sykes already comfortably inside the guaranteed Superpole 2 places. Rea (with three) and Sykes (with a single) are the only riders to have won races at Chang since it was first added to the championship calendar in 2015.

“We focused on a race simulation at the start of the afternoon session and then at the end I just waited to set a time until the last laps. We did not want to put too many laps on my preferred tyre choices. We do not have a massive allocation of my favourite front tyres so I was testing the one-step softer front tyre, in readiness for Superpole. It wasn’t so bad but with more grip the bike worked quite differently on track. At the end of the race simulation, the bike was working really well. But when we added more grip was a bit different. So I will have to change some things in my riding style, to be honest, when I go on a time attack tomorrow in Superpole. All on all, we are pretty OK.” 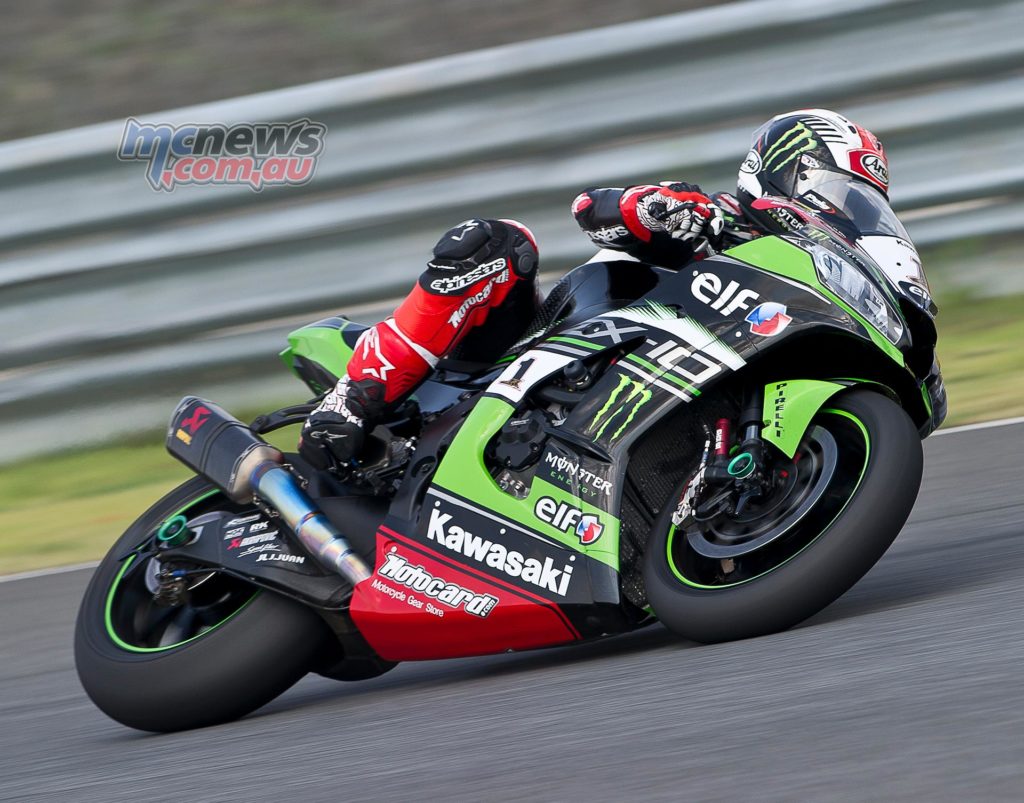 “I am fairly happy because we started off steadily in the morning. In the last moment of FP2, because of the changes we made during the sessions, we got to where we needed to be before the first race on Saturday. That gives me satisfaction about today’s work. Overall the lap time was not too bad but obviously we need to look to improve the set-up slightly. As Fridays go, I am quite happy with what we did. The track is quite grippy in general, offering consistency too. A couple of other guys have really strong pace but hopefully we will be part of the leading train like last year.” Following a late spurt in FP1 as they begin to understand the circuit aboard their Panigale R machines, Marco Melandri (Aruba.it Racing – Ducati) took the third spot overall on Friday, 0.279 off Rea’s time, despite the Italian being unable to improve on his time from this morning. Chaz Davies (Aruba.it Racing –Ducati) finished just behind his team-mate in the humid Asian conditions.

“I’m happy because the team has done a great job and my Panigale R immediately gave me good feedback. This track is more technical than what it looks like: it features hard-braking areas, fast corners, a bit of everything…It’s fun to ride, but I still need to improve under braking and in terms of my lines, especially in the third sector. Still, today went better than what we expected. It will be hard to race in such hot conditions. It would be great to secure front row once again and get a good start. I think the Kawasakis still have an advantage, but we’re ready to make things difficult for them.” 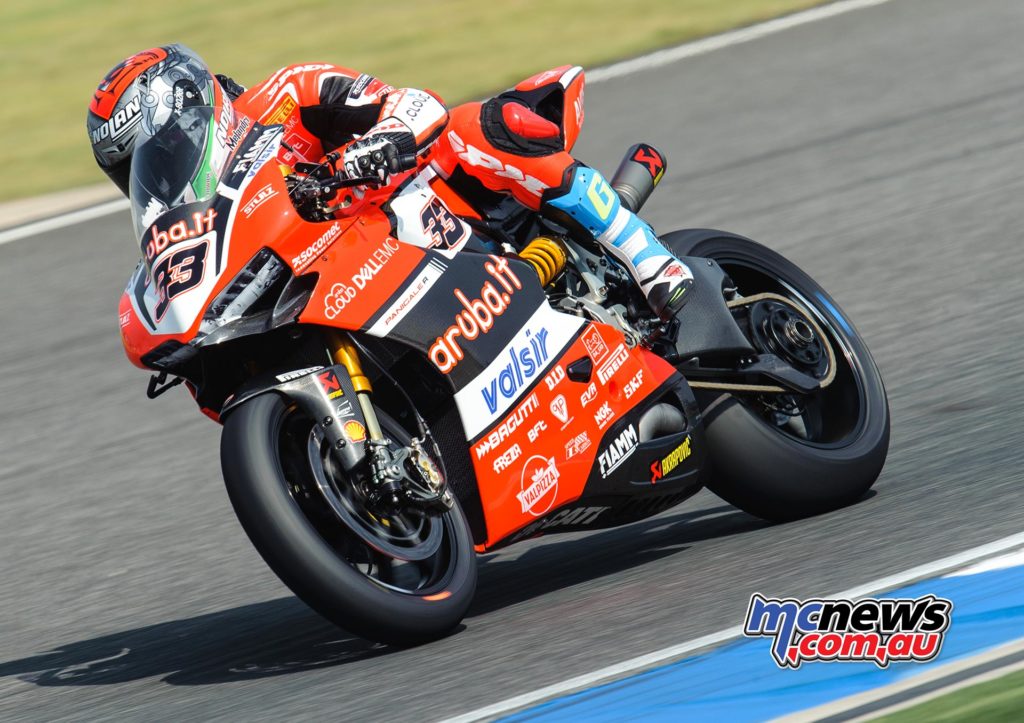 “Today we’ve been working on our program to get the bike in the ballpark, building our confidence progressively, and it looks like we’re all quite evenly matched in the four top positions. It’s the first time here that the track actually allows us to attack from the very first laps. We’ve made good steps forward in between sessions, but there’s still a couple of areas in which to improve, especially the third sector. We need to find one or two tenths there, but our pace is quite competitive nonetheless. I did my best lap on used tyres this afternoon, so overall it’s been a good first day.” Alex Lowes (Pata Yamaha Official WorldSBK Team) continued to build on his pace at a track he has stood on the podium at before, ending the day in the top five with safe place in Superpole. Team-mate Michael van der Mark (Pata Yamaha Official WorldSBK Team) also will take part in the second Superpole session, ending in eighth – lapping at 1.34.291.

Spaniard Xavi Fores (BARNI Racing Team) continues to impress following a strong opening round and after finishing in the top four in FP1, he heads into day two at Chang International Circuit in sixth position, 0.601s off the fastest time.

Markus Reiterberger (Althea BMW Racing Team) narrowly secured a position in the fight for pole position tomorrow, with a top nine finish on Friday. Eugene Laverty (Milwaukee Aprilia) is still working through his new issues with his Italian machine; and despite a moment at turn three he ended in the top ten and will go straight into Superpole Two.

Just missing out on a spot in the all important second Superpole session, meaning they will fight for the top two spaces in Superpole 1 was Lorenzo Savadori (Milwaukee Aprilia), with a time of 1.34.554.

Nicky Hayden (Red Bull Honda World Superbike Team) and Stefan Bradl (Red Bull Honda World Superbike Team) who continue to work through frustrations aboard the new for 2017 Fireblade, the pairing finishing day one 12th and 13th on the charts. Both riders spent the entirety of their track-time evaluating the new solutions and settings developed for their Honda CBR1000RR Fireblade SP2 machines by the team and its technical partners after the opening round. With 45 and 40 laps completed during the day, Bradl and Hayden have given the team a significant amount of information to work with ahead of tomorrow.

“We were expecting a bit more of an improvement this morning but in the afternoon we did make a step in the right direction on many areas that were affecting our performance in Australia, such as engine brake but also traction, spinning and wheelie control. Still, we are trying to put everything together so we need to keep working in this same direction but we indeed found some improvement. We are still chasing and we don’t have the right tools to be up there with the fastest riders, but we are moving upwards.” “Today we had some inconsistency with the bike on corner entry: because of that it was hard for me to try and find the limit as well as pushing for a competitive time. This prevented me from finding the right feeling with the bike. However, we know where the problem is, so it’s a matter of keep working hard and come back stronger tomorrow.” “We made quite a number of changes from Phillip Island to here: with Stefan they worked out quite well and we were able to make some steps forwards. We’re still 12th and 13th after today, but these positions do not reflect our potential. He is steadily building a bit of confidence with the bike and with some more tweaks this will carry over into tomorrow. The Fireblade is giving him a consistent response and there’s a clearer direction to follow with the setup. Nicky had more of a difficult day and different issues to address, but we are investigating and analysing the data in order to come up with a plan for tomorrow.” In a similar turn of events to the opening day at Round One in Phillip Island two weeks ago, Leon Camier (MV Agusta Reparto Corse) was unable to head out in FP1 with a mechanical problem. However the afternoon session saw the Brit continue with his frustrations, putting in 16 laps and finishing in 14th position.

Saturday will see riders take on the Asian challenge on Saturday from 13:30LT for Superpole One, before the racing action begins at 16:00LT (+8 GMT) in Buriram.
.

Vespa team up with Christian Dior for special 946