WorldSBK’s European testing has come to an end in Spain, with reigning World Champion Jonathan Rea dominating at Jerez, after Chaz Davies took the top spot for Ducati at Portimao. Teams now head to Phillip Island in Australia for the final pre-season test on February 20-21, with Round 1 held on February 24-26 with two premiere class races, WorldSSP and 13 national-level support races.

Josh Brookes will compete in WorldSBK as the sole Australian wild card in superbikes on the same Yamaha he won the 2015 British title on before returning to compete the BSB. To read more about Josh Brookes’ wild card see here. Anthony West (Yamaha) will join countrymen Aiden Wagner (Honda) and Lachlan Epis (Kawasaki) in WorldSSP.

The opening WorldSBK test at Jerez from January 23-25 saw all the top teams in attendance, including Honda (Nicky Hayden and Stefan Bradl) with its all-new homologation-special CBR1000RR SP2.

A number of other riders also set times in the 40s mark including Alex Lowes (Yamaha), Xavi Fores (Ducati) and Bradl.

Rea’s top time only came after he crashed at turn three on the final day, when Savadori was leading the way. After a trip to the medical centre to get the all clear, Rea then went out on his second bike to edge out the Italian speedster – who has joined Aprilia’s factory team alongside Eugene Laverty. 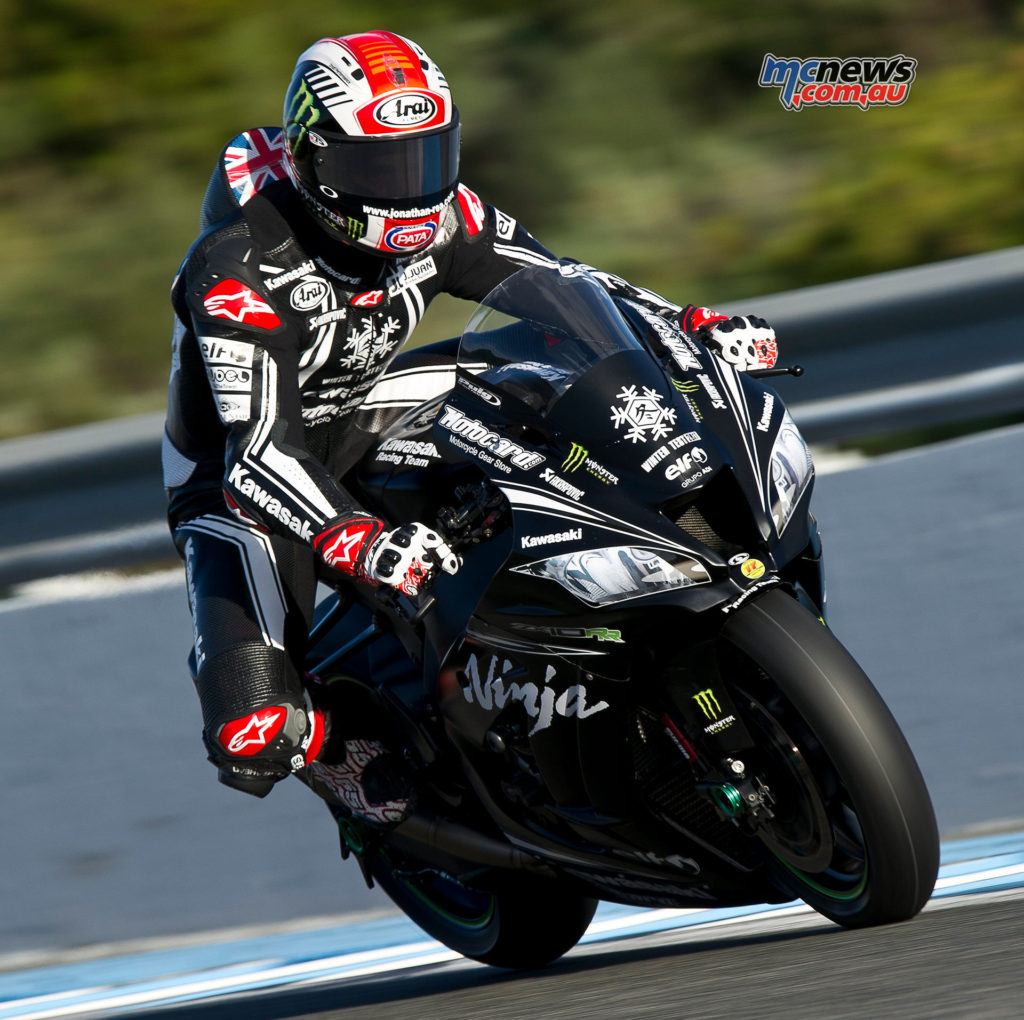 “It is nice to set such a good lap time at this time of the year but it is testing and I have never been the best guy for one lap. We have been able to make many fast laps in these winter tests, however, and we have found a bike set-up that has been working well. I felt my own ‘bike fitness’ was not great as I have been off the race bike for so many weeks now. I am looking forward to the next test to try and do a lot of laps. I need some more mileage to feel like I did during the season last year.”

With teams barely drawing breath, Portimao – returning to the WorldSBK calendar in 2017 after a one-year break – was the next stop on January 28-29, with Kawasaki an absentee. 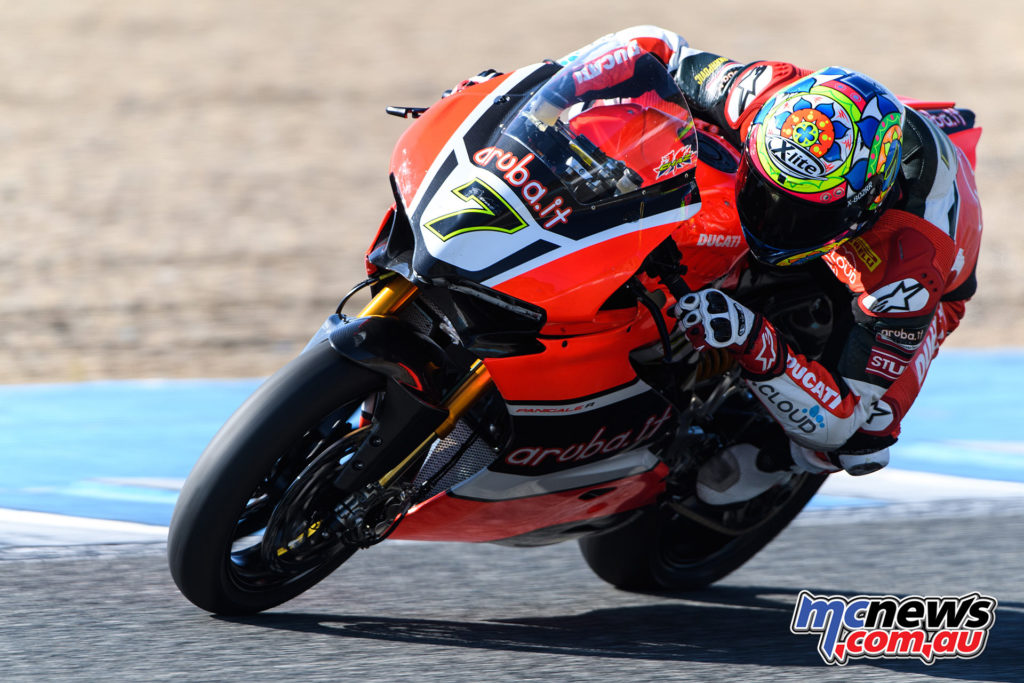 “We did a lot of work in the past two days, as well as in Jerez, and overall we can be happy with the results. We completed a detailed program to evaluate all the technical upgrades, with good feedback. These tests, after a two-month break, were also crucial to allow me to get back the feeling I had on the bike towards the end of last year. The team has done a great job, and we’re optimistic ahead of the season opener in Australia, where we’ll take advantage of the final tests to fine-tune the details.”

Leon Camier managed to finish fifth on the time sheets, only 0.5s off the fastest time recorded over the weekend. The fast Brit rider and his team worked hard during this second and last testing day; along the 81 laps he rode on the Portuguese track, Camier and the MV Agusta mechanics were able to test new solutions on the MV Agusta F4 RC chassis, introducing new weight balancing and refining the electronics as well. With such a high amount of laps achieved, Camier was able to constantly improve his pace, and now looks forward to the next track session at Phillip Island in Australia, for the upcoming official WorldSBK test.

“I am really happy with the test. I didn’t expect to be as close to the front guys as we were but I had great confidence with the bike and I was able to push really hard. The team is working really well together and made great improvements with the electronics as well. I look forward to the next track session in Phillip Island.”

“On day one we started strongly and then very quickly moved on to try out many different test items and machine setup changes. We knew where we were with the base of the bike and we then used a lot of time on track to ensure we will arrive in Phillip Island with a lot less options to evaluate. We still have some small work to do in the Australian tests but because of what we did yesterday we were able to go through a lot of items. Today, in the wet, we built up speed, gradually made some small changes and ended up fairly close to where we needed to be. We found out a lot of information. We now have a cleaner slate to make our preparations for the first race. For Phillip Island we need to start being more focused on performance.”

The teams have now returned to their European bases to prepare to fly Down Under for the final pre-season test at Philip Island on February 20-21 ahead of round one back at the fast and flowing circuit on February 24-26.

At Phillip Island, Aussie Josh Brookes will compete in WorldSBK on the same Yamaha he won the 2015 British title on, while Anthony West (Yamaha) will join countrymen Aiden Wagner (Honda) and Lachlan Epis (Kawasaki) in WorldSSP.

There will be two WorldSBK races over the weekend, in addition to WorldSSP and 13 national-level support races across superbike, supersport, 300 supersport and historics.

Tickets are available from Ticketek, with a three-day general admission at just $120*, saving $35 on the gate price. Also available via Ticketek are BarSBK passes at $260* with undercover viewing locations at the circuit’s most spectacular points – Doohan Corner, Lukey Heights and Siberia. Adult single day tickets start at $30* for Friday, $65* for Saturday and $80* for Sunday, purchased in advance.

World supers is a mega-scorcher delivering three days of action, so make the most of a visit to beautiful Phillip Island in summer and camp at the circuit with up to four nights for just $105*. The best news for families is that children 15 and under are free^ for both the event and circuit camping, making it an affordable, summer long weekend getaway for all the gang at pristine Phillip Island.

All information can be found at www.worldsbk.com.au with news on a range of VIP hospitality packages also available via the circuit.

*All prices advance ticket sales.  Buy early and save on gate prices. ^Children 15 and under.

Rea survives Magny-Cours melee to put one hand on trophy