The french team, after taking 1’15” lead over the United States on Day One, made a great team performance today increasing the advantage to + 4’56” on the second team, Australia.

World Trophy Another almost perfect day for Antoine Meo. The french rider won three of the six Special Stages, leaving the first two to the australian Daniel Milner and the fourth to his teammate Johnny Aubert. The two transalpines currently occupy the first and the third position in the absolute standing, and between them there is just Milner.

Today the best U.S. rider was Robert Taylor, whose team is third in the World Trophy classification. He always has been among the fourth and sixth position before recovering second in the last Special.

Italy was very unlucky because its performance was affected by the bad luck that hit Alex Salvini: in the third round a stone hit its bike’s chain motion, then he suffered the rupture of a platform in the middle of the fifth Special. All this, after the rider was at hospital until late at night to remove a large thorn from his arm.

Junior World Trophy, the category dedicated to young riders, saw the struggle between France and Italy still open, with Britain ready to take advantage of their mistakes. Today the protagonists of the first two teams were Loic Larrieu and Giacomo Redondi, now 9th and 22nd in the absolute ranking. Mathias Bellino is 15th, Moroni 30th. The standing is headed by France, but the gap on Italy is only 66 seconds. The British, for their part, count on the 20th and 26th places of Jamie and Daniel McCanney and they try to remain attached to the first.

Johnny Aubert : “I had good sensations on the Special Tests –explains the french – and as a team we’re going very fast. Each of us is giving the maximum. Our group? There are many good riders, but we don’t think as single riders, but as a team”.

KTM’s Antoine Meo delivered another impressive day at the Sardegna ISDE 2013 on Tuesday to keep Team France on the top of the Leader Board in the World Trophy. The KTM factory rider looked much more settled on the KTM 300 EXC in the E3 class instead of racing his usual E1, in which he is 2013 World Champion.

KTM Factory team boss Fabio Farioli said Meo had made a giant leap from Day One to today’s competition after contesting the opening day with only a short time to familiarize himself with the bike. “Antoine was much more confident today,” Fairoli said. “He was riding a different style altogether.”
Team France now have a four minutes 32 advantage over second placed Australia and USA, with KTM riders Mike Brown, Kurt Caselli and Charlie Mullins are now third. France went into the competition as title holders and they are already looking like they are on their way to another trophy

Meo was fastest E3 rider on Day Two and leads the progressive times in this six-day classic. KTM factory teammate Cristobal Guerrero of Spain was fastest E1 rider and also leads his class after Day Two. Their KTM factory teammate Johnny Aubert is also riding well for Team France. He was second fastest in E2 on Day Two and is closing the gap to Australian Daniel Milner.

France is also leading the Junior World Trophy taking their second consecutive win and are now just over a minute ahead of Italy. Britain advanced from fourth to third and has closed to within 22 seconds of Italy. USA is now fourth, Sweden fifth and Australia is in sixth place.

Riders again faced extremely dusty conditions except for one test where a short burst of rain had turned the dust into mud. Organizers have added two additional tests into Day Three that represent a bigger challenge and riders will contest six tests in all, four of which will be the same as Days One and Two but in reverse order.

The ISDE, the oldest offroad event on the FIM calendar is celebrating its centenary edition in Sardinia. 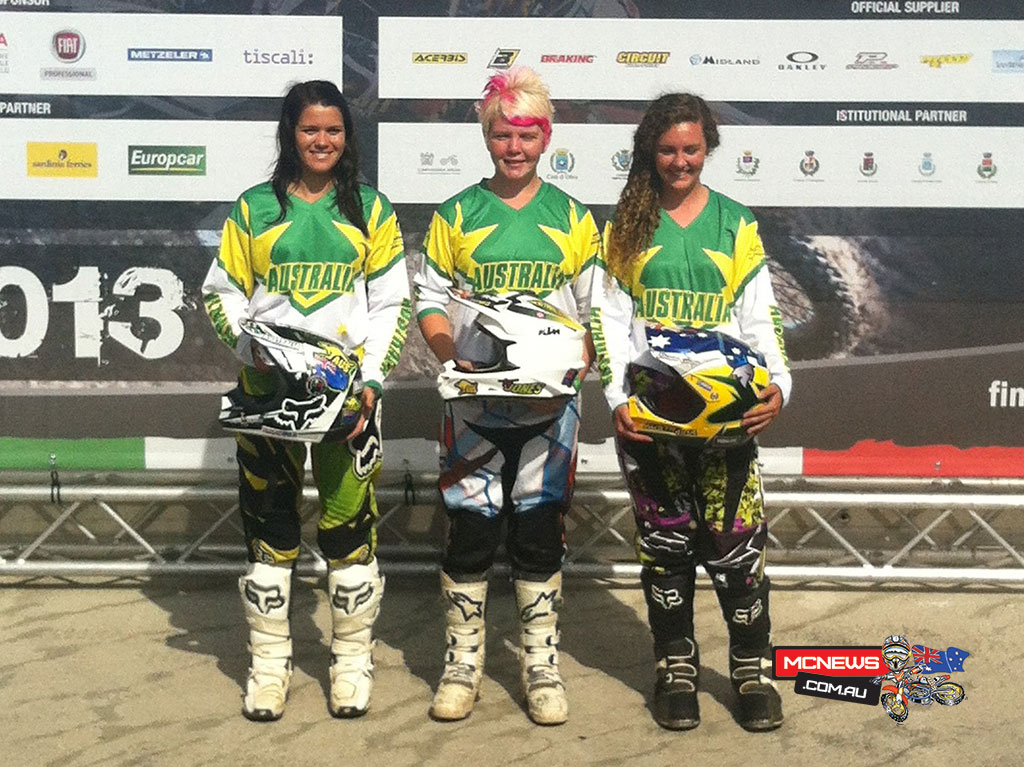 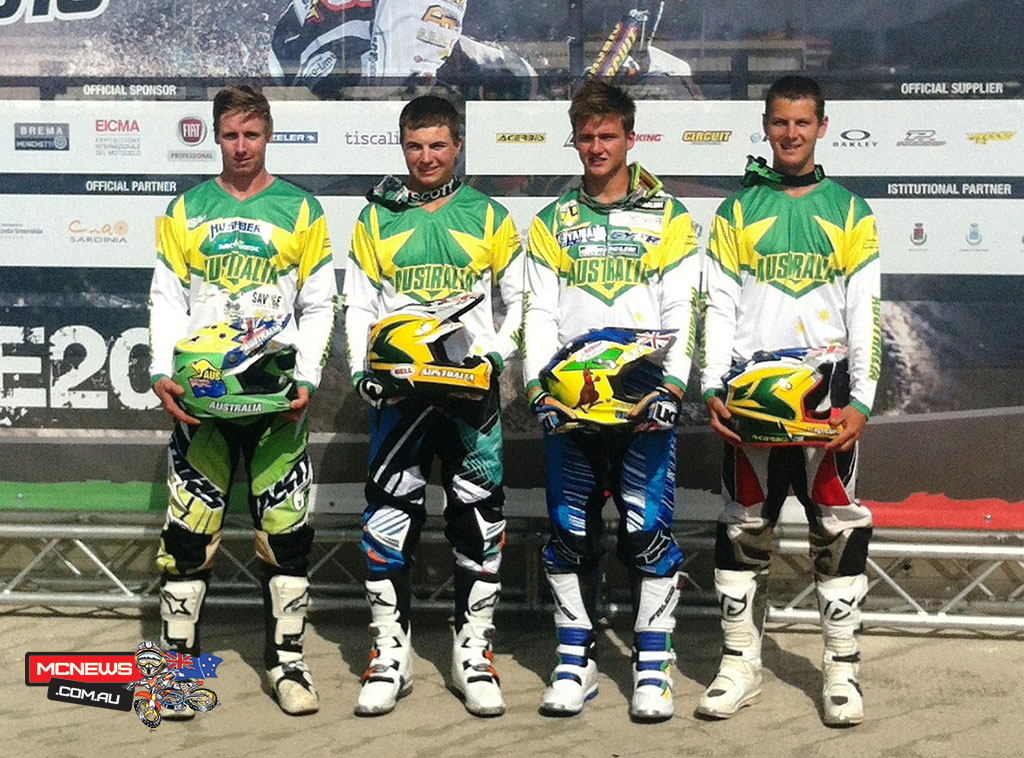 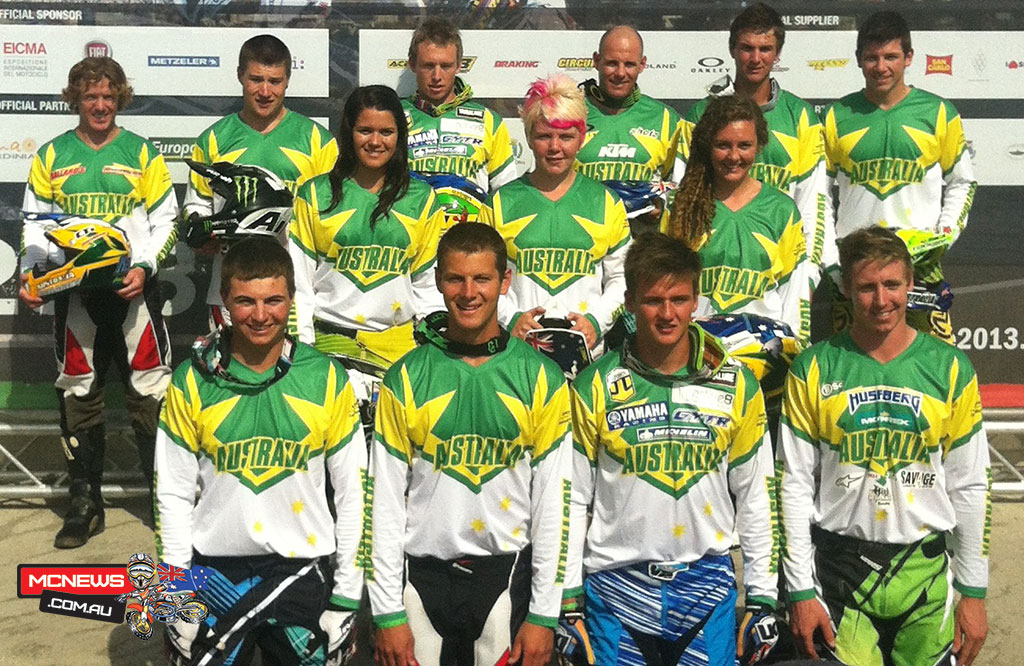 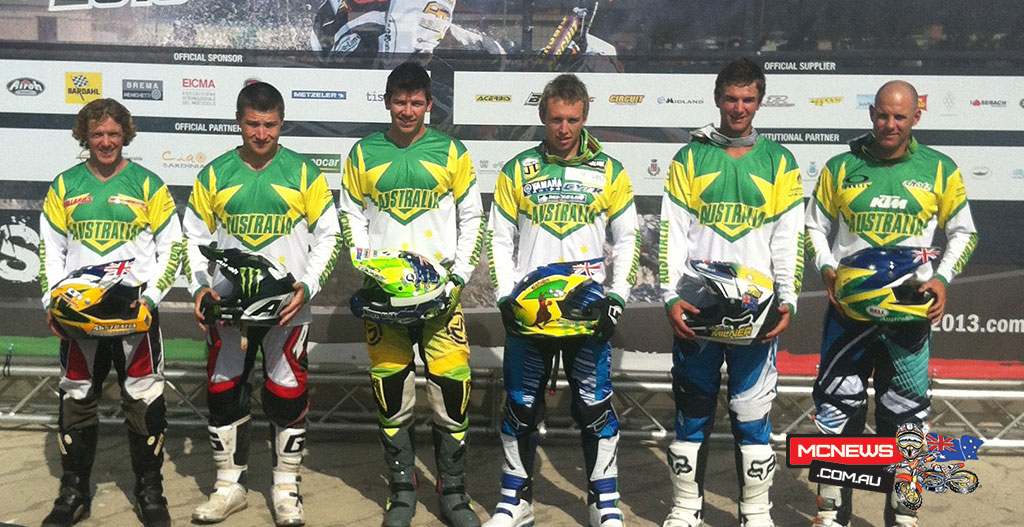 —  Matt Phillips quote – “Had a rough day at the ISDE today had a big crash and ended up having to take a trip to hospital after the race. It was also really sad to hear the passing of our great family friend Heather.
I hope to patch myself up good ready for tomorrow and make sone good scores for the team.”

World E1 Champion Antoine Meo made a solid start to the Sardegna ISDE 2013 on Monday after settling in to ride in the E3 class in place of injured KTM factory teammate Christophe Nambotin. The Six Days classic is being held on the Italian island of Sardinia.

Meo was riding with Johnny Aubert, Pela Renet and Jeremy Joly on Day One for the title-holding French team, which led USA and Australia in the World Trophy by more than a minute at the end of competition. Italy, Spain and Britain were ranked in that order.

With Meo easing himself in the E3 class riding Nambotin’s KTM 300 EXC, the day’s top individual rider in the World Trophy was Australian Daniel Milner. KTM Factory Team boss Fabio Farioli confirmed Meo only had a chance to test the bike the day before competition started. He said he expected him to be faster as the week continues. Although new to the bike, Meo still topped E3 and was third fastest overall on Day One, trailing Milner by just six seconds. Meo also won tests four and five (of six tests) on the opening day. French teammate Johnny Aubert of the KTM Factory team was third in the E2 class and fourth overall at the end of day one. KTM’s Spanish factory riders Cristobal Guerrero was second fastest E1 rider and Ivan Cervantes finished fourth in E2.

It was also a good day out for second placed Team USA, including KTM riders Kurt Caselli, Mike Brown and Charlie Mullins.

France also leads the standings in the Junior World Trophy ahead of Italy, USA and Britain but there is only one minute 15 seconds separating the top four.

Overnight rain laid the dust for the first half of the race but with no more rain expected, Farioli said it might become an issue as the competition continues.

The ISDE is celebrating its centenary edition on the Italian island of Sardinia. It is the oldest offroad competition in the FIM (International Motorcycle Federation) calendar and started in the UK in 1913. As well as the world elite contesting the World and Junior World Trophies, it also attracts hobby and club riders. More than 600 are on the start for Sardegnia ISDE 2013.