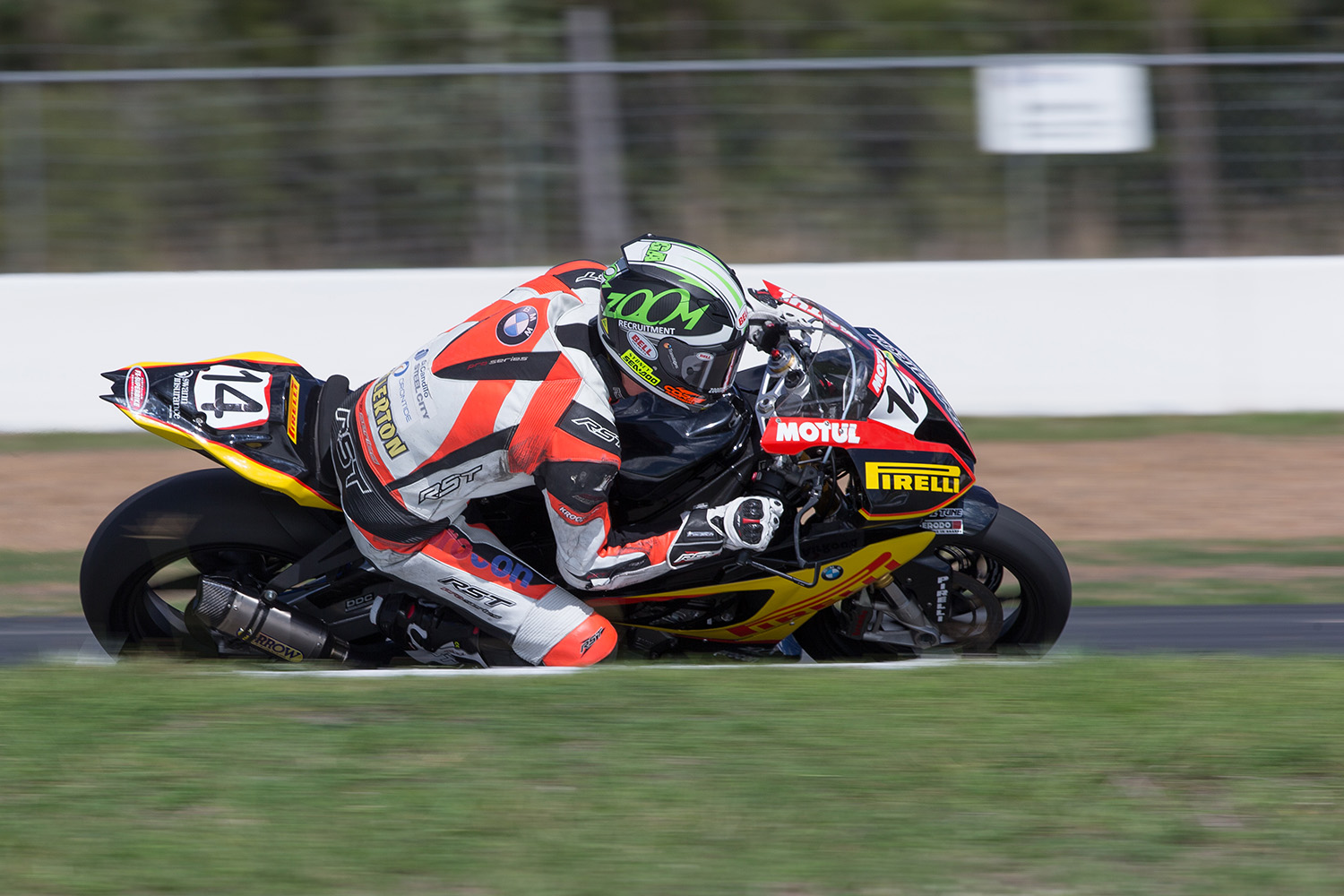 Saturday’s action at round three of the YMF Loan Yamaha Australian FX-Superbike Championship at Queensland Raceway ran thick and fast under mainly clear but changing skies, but the real cloud that hung over the Willowbank circuit was a heated dose of controversy in the Superbike ranks.

After scoring the race victory in the opening Superbike race the rear slick of Glenn Allerton’s BMW S 1000 RR was deemed completely unserviceable.  The centre of the Dunlop rear slick was visibly seen to have suffered serious degradation, forcing the team to pull out of race two, as under the tyre rules only one set can be used for the entire day. Scrutineers not marking a second rear tyre for Allerton in time for him to get out in race two.

While BMW riders Allerton and Magee had the most visible damage to the external surfaces of the tyre, investigation by Dunlop led to further concerns for the longevity of the tyres across the whole field. Thus Dunlop raised possible safety concerns with series promoter Terry O’Neill, who in conjunction with Dunlop decided to allow the use of an extra rear tyre this weekend.

While this decision can be seen as prudent from a safety point of view, it raised the ire of leading riders and teams that, to the naked eye at least, believed they could compete across all three races without major incident. Their view being that if you destroy your rear tyre, you elect to use a new tyre, and take the legislated penalty of starting from the rear of the grid.  Emotions ran high from those that felt BMW riders had been handed an unfair advantage.

Series Promoter, Terry O’Neill – “Dunlop brought to our attention that they were having a few issue at this particular track. One of the strengths of the series is that we have one control tyre, with one compound, and one of the weaknesses is that we have one control tyre in one compound that sometimes doesn’t work quite as well as it does in other places.

“The actual heat build up in the centre of the tyre has seen some of them chunking and Dunlop decided it was best to provide an extra tyre, so all riders had an even playing field and in the end it was more of a safety issue than anything else, and I agreed with them, and the Clerk of the Course has made the determination that one extra tyre can be used.

“Has this happened before? Yes it has, over the last several years we have had this happen on a number of occasions, and occasionally there is an issue with a tyre at a track.”

MCNews.com.au – “But others are saying that if you have a problem with the tyre, then you take the penalty and start from the rear of the grid, and that a wholesale allowance of an extra tyre, without penalty, when some people have problems with the tyre, while others, seemingly, do not, unfairly advantages some to the detriment of others.”

“Quite often in the past, riders would be quite happy to have another tyre because it gave them an advantage, this is not a case like that, this is a case of making it an equal playing field for everyone.

MCNews.com.au – “What would you say to those riders and team managers that deem the decision  unfair, as, according to them, they have no problem, and thus everyone should be made to ride to the rules as they were written and if you have a problem you should take the mandated penalty of starting from the rear of the grid.”

Terry O’Neill – “They are making emotional comments that are made on the limited information they have in front of them, which is not a lot.  I have seen some of the tyres that have been cut open that have come from their bikes, the bikes of riders that say they have no problem, and whether they were going to have the problem first up this morning, or later this afternoon, a number of them are going to have the same problems, so we decided it was best to head it off at the beginning, rather than wait for it to get potentially worse.”

We asked Yamaha Racing Team Manager, John Redding, whose riders looked unlikely to have tyre degradation problems, about what he thought of the decision to allow an extra tyre to be used.

“Our understanding is that Dunlop took that decision under considerations of safety. We tested that tyre for quite some time here and we got a lot of laps out of it on our bikes without a problem at all so I guess the jury is out

“Certainly in the past there have been situations where tyre degradation or damage problems have occurred, and a response like this from Dunlop hasn’t come out, but I guess with new management at Dunlop now they are changing their policies and have perhaps become more sensitive to safety related issues.”

MCNews.com.au – “Do you agree with the decision? Or do you think that the bikes and riders that are suffering the tyre problems, should just have to wear it, if other teams, in their opinion, are not suffering the same problems?”

John Redding – “If the current rules say that you can put a new tyre on, but you have to start from the back, then perhaps that is what everyone should abide by. At the moment the rules are being changed, and one thing we don’t agree with is rules being changed on the fly, verbally…. It does make the whole effort look a bit amateur.”

We put concerns such as those raised by Redding, which were echoed by many others we spoke to up and down pit lane, to Dunlop Tyres Motorcycle and Motorsport Manager Sabastian Mincone.

Dunlop – “We made the decision in conjunction with Terry O’Neill, the decision was made on the data we managed to collect over the weekend.

“We have started to see more and more temperature through the tyres, from yesterday to today, and the trend is going to go even higher this afternoon, so we are just trying to be proactive and make sure that tomorrow everyone is going to have a good race.”

To be fair, criticism of the decision did back off a little later in the day as more tyre problems became evident, but it is also fair to say the majority of Superbike riders still stuck to their point of view that those affected should just wear the previously mandated penalty and that the tyre rules, and mandated penalties should have been left in place. The fact that Allerton also went out in the final Superbike race of the day on a new tyre, starting from the back of the grid with a 30-second penalty, to try and set the fastest lap of the day and thus ensure pole position for tomorrow, added much insult to injury to the teams that did not agree with the allowance of an extra tyre for tomorrow. Allerton failed to put in a quicker lap than he actually managed in race one, thus no actual advantage was gained, but it did leave a foul taste in many mouths up and down pit lane. It was a wily move, and series promoter Terry O’Neill, declared that loophole will be closed in the regulations before the next round. O’Neill also mentioned, through a wry smile, that it was a very smart move on Allerton’s behalf and that nobody should be penalised for being smart…