AMA Supercross hosted Round 13 in front of 55,407 fans inside CenturyLink Field in Seattle for one of the slimiest, slickest races in history.

The Monster Energy Kawasaki of Eli Tomac found itsway to a third-place start, battling back and forth with Team Red Bull KTM Factory Racing’s Marvin Musquin for second with Rockstar Energy Husqvarna Factory Racing’s Jason Anderson out front for the first five laps. After Tomac passed Musquin, a mistake by Anderson handed Tomac the lead for the remaining six laps of the 11-lap race. Anderson held on to second ahead of Musquin who rounded out the podium with a third-place finish.

“It’s just one of those tracks where you just have to either ride it and have fun or you’re just in misery, and today we were having fun,” Tomac said after the race. “That was, by far, the craziest Supercross moments I’ve ever been in. It felt like I was in the backyard just having fun and riding in the mud, and that’s how you had to treat it.”

Jason had launched his Husqvarna FC 450 off the gate and led the pack into the first turn from where he immediately opened up a nice gap on the field. He went down in the fifth lap and lost the lead, but remounted in second and made every attempt to regain the top spot. He eventually finished second and retained the all-important championship leader red plate.

“The whole day was a little weird due to the delayed program,” said Anderson, “but practice went as well as it could have in the mud–I qualified first. I was up front in the heat race, but was pushing too hard so I pulled back. I ended up coming back to second. I was out front and riding awesome in the Main but had a bit of a hiccup. All-in-all I did what I needed to do tonight so it was good.”

Marvin Musquin scored the holeshot on his KTM to capture and battled for the early lead on the opening lap with Anderson before being left behind to battle for the final step on the podium.

“It’s not often that we have a muddy race like that in Supercross but we have no choice, we have to go out and give our best. The conditions were pretty tough, the mud was pretty sticky for the Main Event. Honestly, I’m a little disappointed. I got a great start but the speed wasn’t there. My intensity – I was too timid and too cautious. I should have taken more risks but I was just trying to be consistent and stay on two wheels and the other guys were just faster.”

Chad Reed has been running a strong fifth as his machine started to expire with it eventually coming to a complete stop on the up-ramp to the finish line.

Thankfully for Reed he managed to make it to the point where the timing loop measured the results and thus was credited with a seventh place finish. It was a great show of heart and determination from the veteran Aussie.

Yamaha Racing’s Aaron Plessinger ran away with the 250SX Class win, leading from the start of the shortened 8-lap Main Event. 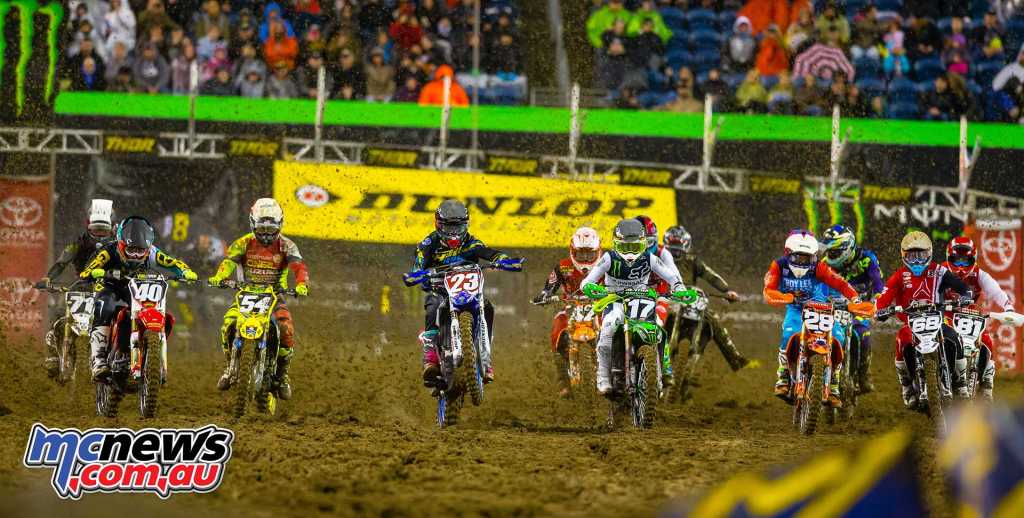 “That was fun,” Plessinger said on the podium. “That was a sick race; it reminded me of a lot of GNCCs, so it was good to get out there and have some fun and rip some ruts. There were sometimes where the ruts were two feet deep, and you just had to pick a good line … I knew I could do it here. I love Seattle. I love all these fans here; they make it exciting.”

Aaron Plessinger extends his Western Regional 250SX Class points lead with his fourth win of the season in Seattle.

“Tonight in Seattle went a lot better than expected,” said Cianciarulo. “I made an amateur mistake in the heat race and overheated my clutch, which eliminated me from the heat. From there it was all hands on deck because we had to turn around and race the LCQ, which we won, then turn around again and line up for the main event. This Monster Energy/Pro Circuit/Kawasaki team is the best. Overall, it was a good weekend because we got on the box and I am leaving healthy.”

Australia’s Hayden Mellross rounded out the top ten and is currently tenth in the Western Regional 250SX Championship points standings.

The 2018 Monster Energy Supercross season continues April 14 with Round 14 inside U.S. Bank Stadium in Minneapolis.

Beaton 10th despite crashes at MXGP of Limburg