Andrea Dovizioso came out firing to go fastest overall on Friday at Silverstone but home hero Cal Crutchlow was only a slender 0.005s off the Italian’s 2:01.358 to finish the opening day of practice in second place.

“I’m pleased because despite the difficult track surface conditions we were able to put in a good performance, especially this afternoon when I lapped with the tyres used in the morning and we were even quicker. Unfortunately, here at Silverstone the bumps in the asphalt make the situation rather complicated, but in any case I can see that virtually everyone is struggling: they’ve resurfaced the track but the conditions are worse than last year. Luckily the grip is good and so in the end things are not going so badly. Tomorrow we’ll try and use some other tyres, seeing as today we only focussed on tyre solutions for the rear, but for the moment I’m very satisfied with this first day.”

“I don’t think it was superb today, but that’s me being a racer and wanting to improve. Obviously I’m happy with the position I’m in, but I’m not fantastically happy with the way I feel on the bike. But overall I’m pleased, I happy with the way the team is working with regards to how we’re approaching the weekend and doing our job, but I’m concerned for the weather and with the forecast for Sunday. I want a dry race because I have the pace to win this in the dry. I do not want to say anything bad about Silverstone because they do a great job here with how they run the event. But the track is in bad shape, I rode here three months ago and it was flat and perfect, but now it’s really bad and there are a lot of bumps, especially on a MotoGP bike with the horsepower we’ve got. With the wind we had today also, it made it a difficult day for everybody.”

Maverick Viñales stayed up at the sharp end for a strong opening day overall, with the 2016 winner 0.061 off the top to end the day in third overall.

For sure, Silverstone is a circuit I really love to ride at. I love every corner of this track, so this helps a lot. The combination of this track and this bike helps too. We made good improvement. We could see today in the data that the bike was working better than it was in the previous races, and that’s really important. We’re going to try to at least fight for the win. So far we’re having a good weekend and we’re feeling positive. There’s still work to do, but we’re at a good point. Concerning the lines, riding style, and electronics, there’s still a little room for improvement. This will be very important for the next days.”

After a sunny morning, the threat of rain was in the air but it held off as the premier class got an all-important dry Friday under their belts on a newly resurfaced Silverstone.

Behind that close trio at the top it was Championship leader Marc Marquez who took fourth – joined in the top five by Austria sparring partner Jorge Lorenzo – despite some ups and downs for the two.

Marquez suffered a crash in FP1 – a low drama lowside – and Lorenzo left it late to blast back into the top ten and provisional Q2 entry should the weather change.

“I’m very happy with today’s final outcome because this morning we didn’t have the best start to the weekend; I didn’t feel comfortable on the bike and also had a small slide that didn’t help. We struggled with the bumps, wind and new asphalt because last year’s base setup wasn’t working so well anymore. We did a recheck of everything and made a huge step from FP1 to FP2. We understood the direction to follow, which is very positive; the team has done a great job. We must continue this way tomorrow as there are a few things we have to improve further, but the important thing is that we’re right there again, not far from the top. Tomorrow we’ll try to get a front-row start, but if that’s not possible, we must do not worse than the second row because with a high chance of rain on Sunday, it will be important to start near the front.”

“I’m quite pleased with the work we’ve done today, because in the afternoon we were able to improve the bike from this morning. In the second session I felt a lot better and we resolved a few set-up problems, and if we continue like this I think that we can get our times down even further tomorrow and fight for the leading positions. Despite the fact that it has been resurfaced, the track has more bumps than before and the grip hasn’t improved, and that’s the reason why we weren’t able to lap with better times today.”

“I am pleased with this first day of free practices. The feeling is very good and we have done a good job with the tires. Maybe we didn’t find the ideal moment to get out with the soft but with the medium one, the time is really good. We have great confidence”.

Johann Zarco (Monster Yamaha Tech 3) managed to grab a top ten position in seventh at the end of FP2, the Frenchman jumping up two positions from his P9 in the morning, with Valentino Rossi (Movistar Yamaha MotoGP) eighth quickest overall after finishing FP1 in second – a turnaround so far for the Iwata marque after a tough Red Bull Ring.

“We were lucky to have dry conditions today, so I’m happy because we were able to do some really good work in the course of the day. In the afternoon we improved a lot and on my last three laps I really got a great feeling and I’m satisfied that the bike was answering well. We ended up in seventh position, which is going to be useful in case of rain tomorrow to be straight in Q2. The track itself is difficult, the wind and the bumps make the bike moving a lot, but this pushes us to work even more on the bike. I think we can find further solutions for this, which will also help us a lot for the next races.”

“It looks like this track is better for the M1 and Yamaha, our bike works well. Maverick and I are quite fast. About the tyres, I tried the soft, I tried the medium, front and rear. It’s always a lot of work with the tyre decision, because you have to understand the situation well, but it looks like it didn’t change a lot compared to last year. The allocation is good. The new asphalt’s grip is a bit better than the old one. It’s also good because last year we had a lot of types of asphalt, there was a bit of confusion, but now there’s just one. The problem is the bumps, because they remained and there are quite a lot of them. That situation is difficult, but for the rest it’s good.”

“We started the weekend exactly as we intended: having both riders feature at the top of the timesheets right from the first session. The test in Misano last week helped us prepare a bit for this weekend, because we started it the way we ended things there. We know the YZR-M1 suits this track, but we were curious about the new asphalt. Despite the cooler weather conditions and the bumps on track, both riders are quite comfortable on their bikes. We’ve been able to compare multiple tyre options, but the combination for the race hasn’t been decided yet. We’ll continue the fine-tuning tomorrow and we’ll we keep an eye on things because changeable weather is forecast, so we’ll need to be able to adapt to whatever the weekend brings. It looks like the race will be wet, so we hope to have at least one fully wet practice session to prepare for Sunday.”

So far Silverstone looks set to be a classic, with Ducati, Yamaha and Crutchlow all aiming to take the fight to Marquez this weekend. The premier class have another chance to book their place in Q2 on Saturday morning, with big names such as Danilo Petrucci (Alma Pramac Racing), Dani Pedrosa (Repsol Honda Team) and Alex Rins (Team Suzuki Ecstar) all aiming to get into the top ten before qualifying.

The start of the afternoon session was dry, but it wasn’t long before the rain started to fall on the Northamptonshire circuit – ending anyone’s hopes of improving their times from FP1. This meant the overall standings remained as they were from the morning, with Lorenzo Baldassarri (Pons HP40) fourth quickest and FP2’s quickest man Alex Marquez (EG 0,0 Marc VDS) fifth overall.

Meanwhile, Championship contender Miguel Oliveira (Red Bull KTM Ajo) ended Friday down in P20 on the combined timesheets. The Portuguese rider began the day with a lowside and was then thwarted by the rain – so he’ll likely be one of the first to blast back out on Saturday, looking to improve.

Tech3 Racing’s Remy Gardner immediately found a great feeling from the word go at the Silverstone circuit this morning and was proving his great wet skills later in a rainy FP2.

“This has been a pretty positive day here in Silverstone. We didn’t put the soft tyre in in the dry this morning, but even with the harder option I felt like I could have gone faster, so I think we are not too bad. In FP2 I did one lap in the dry with the softer tyre and I felt really confident immediately, then it started to rain. It was good fun in the rain as always.” 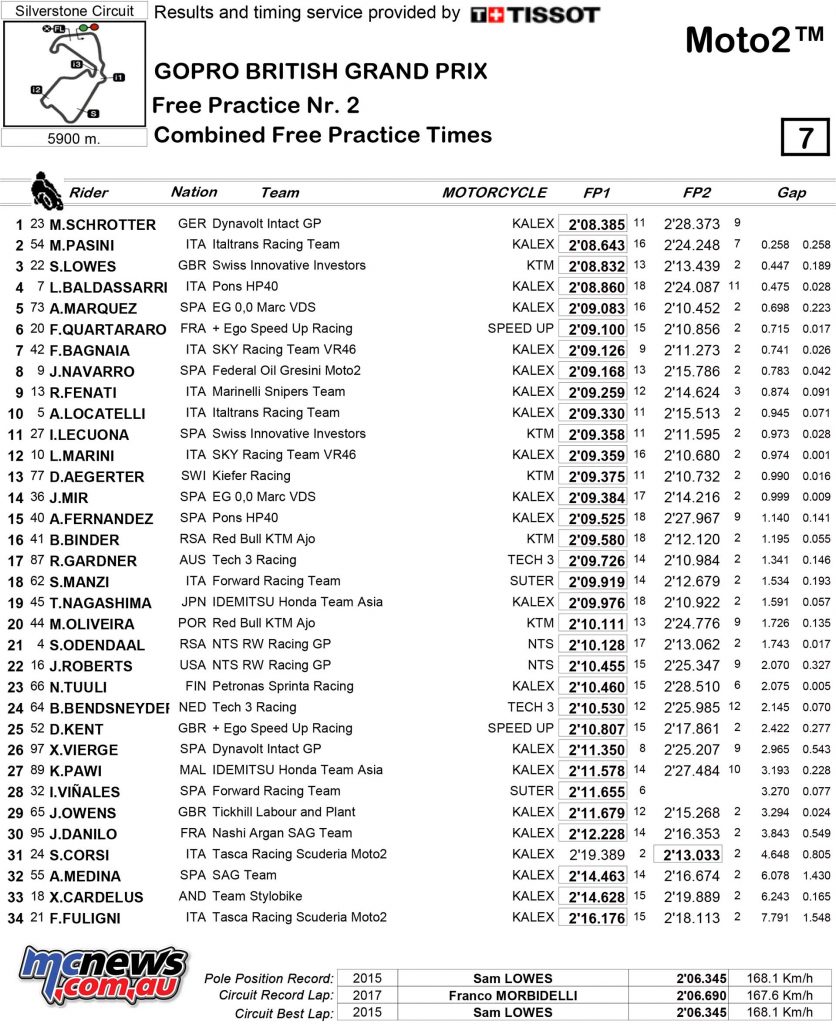 Tony Arbolino (Marinelli Snipers Team) went fastest in Moto3 FP2 to go top on Friday at the GoPro British Grand Prix, despite having finished 18th in FP1. It was close at the top, however, as Championship leader Marco Bezzeccchi (Redox PrustelGP) ended the day second and just 0.008 behind his compatriot, with Niccolo Antonelli (SIC58 Squadra Corse) rounding out the top three on the overall timesheets.

The rain threatened to disrupt the lightweight class’ second session of the weekend, but it held off before the field came out to put in some of the quickest times of the day. Fourth on the overall timesheets was Gabriel Rodrigo (RBA BOE Skull Rider), improving from his P16 finish in the morning, with Aron Canet (Estrella Galicia 0,0) rounding out the top five after the opening day’s track action – slipping down from P2 in FP1 as the top five were the only riders to drop below the 2:15 barrier.

Philipp Oettl (Südmetall Schedl GP Racing) was the man to beat in the morning, however, and the German rider eventually ended up sixth fastest on the opening day as the top 20 riders all improved their times in the afternoon. Seventh overall was Fabio Di Giannantonio (Del Conca Gresini Moto3), with Jakub Kornfeil (Redox PrustelGP) in P8. Tatsuki Suzuki (SIC58 Squadra Corse) improved from 22nd in FP1 to finish ninth at the end of the opening day, with the still-recovering Jorge Martin (Del Conca Gresini Moto3) rounding out the top ten in another impressive performance despite his crash at Brno. MotoGP World Champ updates us on his off-season