This is the 28th successive year that the Circuit de Catalunya has hosted a Grand Prix event after first being included on the Grand Prix calendar in 1992.

The last time that Spain did not have at least one GP winner across the three classes at the Catalan Grand Prix was 2002.

Ducati have taken four MotoGP wins at the Catalunya circuit, including their very first in the class with Loris Capirossi in 2003 (of which it’s the 16th anniversary on the qualifying day of the Catalan GP in 2019). The last win by a Ducati rider at the Catalan GP was last year with Jorge Lorenzo.

The only win for Suzuki was in the 500cc class in 2000, with Kenny Roberts. In 2016 Maverick Viñales’ fourth place equalled the best result for a Suzuki rider at the Catalunya circuit since the introduction of the MotoGP class in 2002, which had previously been achieved by John Hopkins in both 2006 and 2007.

Aleix Espargaro started from pole in 2015 in Catalunya,which was the first pole for Suzuki in the premier class since Chris Vermeulen took the top qualifying spot at the Dutch TT in 2007. It remains the most recent pole for the Japanese manufacturer.

The best result for KTM in Barcelona in the premier class came last year with Pol Espargaro who crossed the line in 11th place, while both Bradley Smith and Mika Kallio crashed out.

In 2016, Alvaro Bautista scored the best result for Aprilia in the MotoGP class with an eighth-place finish.

There has been at least one Spanish rider on the podium in the MotoGP race at this track since 2007.

The nine Moto2 races that have taken place in Catalunya have been won by eight different riders: Yuki Takahashi (the only victory for a Tech3 bike), Stefan Bradl, Andrea Iannone, Pol Espargaro, Tito Rabat, Johann Zarco, Alex Marquez and Fabio Quartararo. The only rider who has more than a single Moto2 victory at this circuit is Johann Zarco who won in 2015 and 2016. Only two of them have not won from pole position: Yuki Takahashi (2010) and Andrea Iannone (2012).

The seven Moto3 races that have taken place at the Catalunya circuit have been won by seven different riders: Maverick Viñales, Luis Salom, Alex Marquez, Danny Kent, Jorge Navarro, Joan Mir, Enea Bastianini. Only one of them has been won by a non-Honda rider: Luis Salom (KTM). Four of them have won from pole position: Maverick Viñales (2012), Luis Salom (2013), Alex Marquez (2014) and Enea Bastianini (2018).

82 – This was the 82nd podium finish in the premier class for Marc Marquez, six less than Giacomo Agostini, who is in fifth place on the list of riders with most podium finishes in the class.

22 – During the MotoGP race in Italy, 22 riders set lap times within one second of the fastest lap time, beating the premier class record set at the 2017 Dutch TT and later equalled in Qatar last year, with 20 riders within one second.

4 – Four points cover the top three in the Moto2 Championship classification which the smallest margin covering of the top three riders in the intermediate category after the opening six races of the season since the current points scoring system was introduced in 1993.

Danilo Petrucci is the fourth different rider to win a MotoGP race this year, making the three successive years there were four different winners in the opening six MotoGP races of the year.

At Mugello, Marc Marquez stood on the podium for the 121st time of his Grand Prix career, equalling Phil Read in sixth place on the list of riders with the most podium finishes, behind Angel Nieto (139).

Marc Marquez has failed to score points only three times since the Catalan GP last year (Australia and Valencia in 2018, and Austin this season). Over the last 15 races he has finished since Catalunya, he has always stood on the podium and finished third only once, in Brno.

With his fourth-place finish in Italy, Alex Rins has scored points in the last 15 successive races. The last time he failed to score any points was in Germany last year when he crashed out on the opening lap with Pol Espargaro.

Takaaki Nakagami finished fifth in Mugello, which is his best result since he stepped up to the MotoGP class. This is the best result for a Japanese rider in the premier class since Katsuyuki Nakasuga was second in Valencia 2011 and the best in dry conditions since Shinya Nakano was fifth in Malaysia back in 2008.

Nakagami is now in third place in the Independent Team riders classification with 40 points behind his teammate Cal Crutchlow (42 points) and Jack Miller (42).

Maverick Viñales crossed the line in sixth place in Mugello as the top Yamaha, making it the first time since 2003 there was no Yamaha rider on the podium at the track.

Neither of the two Yamaha factory riders have won at least one of the six opening races for the second successive year. The last time the Monster Energy Yamaha MotoGP team did not have a win in any of the first six races of the year in two successive seasons was in 2002 and 2003.

Following the Italian GP, Yamaha have scored 88 points in the Constructor’s World Championship classification, which is the lowest points accumulated after the opening six races by Yamaha since 2003 when the Japanese manufacturer had 70 points after the Catalan GP.

With Valentino Rossi crashing out of the race in Italy and Johann Zarco crossing the line in 17th, only four riders have scored points in all six of the MotoGP races in 2019: Danilo Petrucci, Alex Rins, Andrea Dovizioso and Pol Espargaro.

The only two of the four rookies in the MotoGP class this year to have previously won in any of the smaller classes in Catalunya are Fabio Quartararo, who won in Moto2 last year after qualifying on pole position, and Joan Mir in Moto3 back in 2017 on his way to clinching the title.

Fabio Quartararo finished in 10th place at Mugello and he is still leading the fight for Rookie of the Year with 31 points, followed by Joan Mir (12 points), Francesco Bagnaia (9 points) and Miguel Oliveira (8).

Danilo Petrucci’s win at the Italian GP is his first since he joined Grand Prix racing in the MotoGP class back in 2012. He became the first rider to take his maiden win in the class at the Mugello circuit.

Petrucci won on his 124th GP race in Italy, which is the highest number of premier class starts for a rider taking his maiden win in the class, beating the record set by Cal Crutchlow, who won for the first time at the 2016 Czech GP making his 98th GP start.

Aged 28 years 221 days old, Petrucci is the oldest rider to take his maiden win in the MotoGP class since Cal Crutchlow in Brno back in 2017, at 30 years 297 days old.

Danilo Petrucci became the seventh rider since the introduction of the MotoGP class in 2002 to win a premier class race without previously competing full-time in any of the smaller GP classes along with Nicky Hayden (3 wins), Cal Crutchlow (3), Makoto Tamada (2), Troy Bayliss (1), Chris Vermeulen (1) and Ben Spies (1).

Along with Chris Vermeulen, Danilo Petrucci is only the second rider to have won in both STK1000 European Championship (former STK1000 Cup) and MotoGP.

With his win, Danilo Petrucci (8 podium finishes with Ducati) is now sitting in fourth place in the list of Ducati riders with most podium finishes in the MotoGP class, behind Casey Stoner (42), Andrea Dovizioso (33) and Loris Capirossi (23).

The win for Petrucci was the 140th podium finish for Ducati in MotoGP, closely followed by Andrea Dovizioso, who gave Ducati their 141st podium in the class.

The win for Petrucci in Mugello is the third successive victory for Ducati at the track, equalling the sequence set by the Borgo Panigale factory in Losail, Motegi and at the Red Bull Ring, and one less than at Phillip Island.

Over the last two years, the Ducati rider who has won in Mugello also won at the following race in Barcelona: Andrea Dovizioso in 2017 and Jorge Lorenzo last year.

With Alex Rins in Austin, this is the first time there have been at least two first time winners in MotoGP in a given season since 2016 with Jack Miller, Cal Crutchlow, Andrea Iannone and Maverick Viñales.

Jack Miller set the fastest lap of the race in Italy before crashing out, with a time 1’47.647. During the race, another 21 riders set lap times within one second of this fastest lap time, beating the premier class record set at the 2017 Dutch TT and later equalled in Qatar last year.

Andrea Iannone finished the Italian GP in 15th place, crossing the line just 28.051 seconds behind race winner Danilo Petrucci, which is the ninth closest top 15 of the all-time in a full-length premier class Grand Prix.

0.338s between Danilo Petrucci and Andrea Dovizioso across the line in Mugello is the ninth smallest podium time margin in the premier class, slotting in ahead of the 1991 Japanese GP 1991 (0.353s) and the Czech GP last year (0.368s) 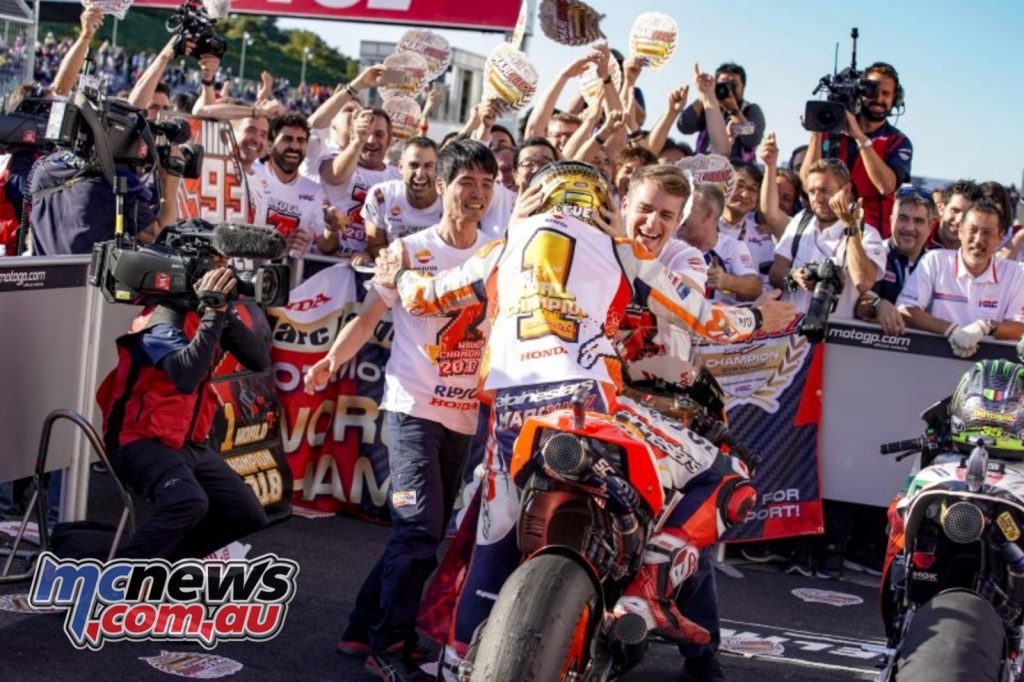 With his second-place finish in Mugello, Marc Marquez became the sixth rider in the history of Grand Prix racing to reach the milestone of 3000 points, as shown in the following table of ten riders who have scored the most points in the history across all solo classes.

In addition, with his third place at the Italian GP, Tom Lüthi closes in on Casey Stoner in eighth place on the list of riders with most points in Grand Prix racing. 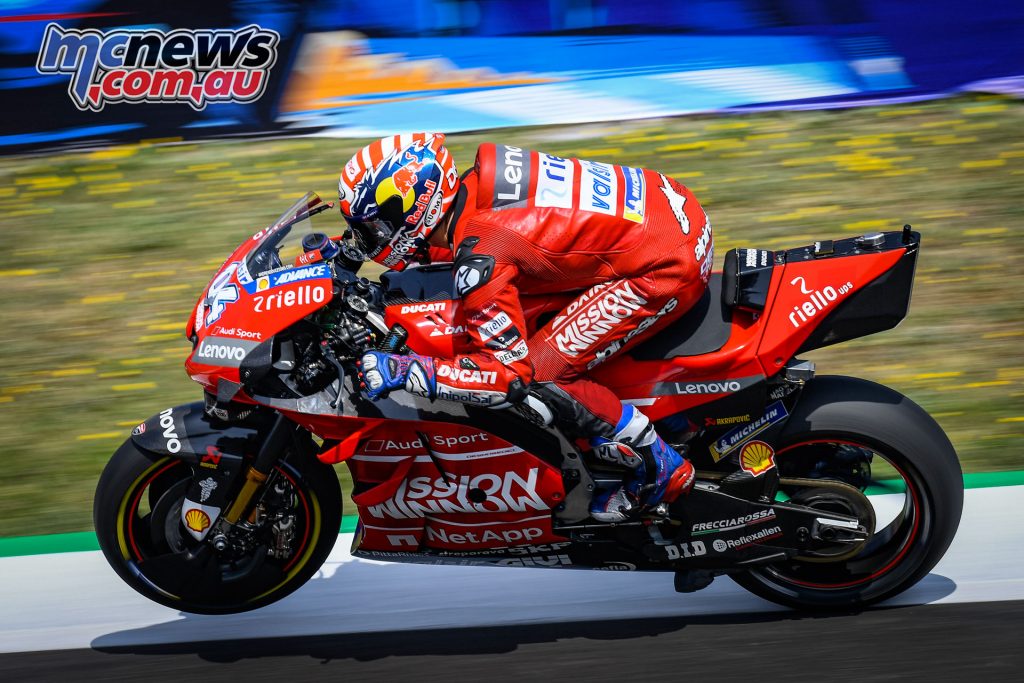 At the Catalan GP, Andrea Dovizioso is scheduled to become the first rider to reach the milestone of 300 successive Grand Prix races. Dovizioso has not missed a single Grand Prix race since he became a full-time GP rider in the 125cc class at the opening race of 2002 at Suzuka in Japan.

Second on this list is Valentino Rossi, whose sequence of successive GP races came to an end when he crashed in practice at the 2010 Italian GP and broke his leg.

Max Biaggi is in third place with 201 successive GP races, a sequence ended in Valencia back in 2005 when he retired from Grand Prix racing.

At 1963 TT, Fumio Ito crossed the line in second in the 250cc race, which is the first Yamaha podium finish in GP racing.

At the 2000 Catalan GP, Kenny Roberts won the 500cc race in Catalunya riding a Suzuki, which is the most recent podium finish for Suzuki at the track so far.

The 1984 French GP races were contested on Monday, which was the last time this had happened until the MotoGP race at the 2009 Qatar GP (due to weather conditions).

At the 1952 TT, Cecil Sandford won the 125cc race, giving MV Agusta the first of their 275 wins in Grand Prix racing.

At the 1963 TT, Mitsuo Itoh won his first GP win in 50cc, becoming the first (and only) Japanese rider to win a TT race.

70 years ago, at the 1949 TT, Freddie Frith won the 350cc race riding a Velocette, which was the first ever race counting towards the World Championship.

Ten years ago, at the Catalan GP, Valentino Rossi won the MotoGP race (his 99th Grand Prix win) after a great battle with Jorge Lorenzo.

At the Grand Prix of Madrid in 1998, held in Jarama, Carlos Checa took his second (and last) 500cc win from Norick Abe and Sete Gibernau, following a collision between Simon Crafar, Max Biaggi and Mick Doohan at the very first corner.

On the same day, Dani Pedrosa gave Honda their 150th GP win in the 125cc class.

At the European GP back in 1991, Max Biaggi made his first GP appearance in the 250cc World Championship, but failed to score any points.

40 years ago, at the 1979 Yugoslavian GP, Graziano Rossi won the 250cc race from Greg Hansford and Patrick