Turk overhauls Rea and pulls away to secure important victory

The battle to be crowned champion in the 2021 Motul FIM Superbike World Championship raged on overnight with the opening race of the weekend  at the Circuito San Juan Villicum. Toprak Razgatlioglu (Pata Yamaha with Brixx WorldSBK) and Jonathan Rea (Kawasaki Racing Team WorldSBK) went head-to-head, with birthday-boy Razgatlioglu coming out on top and extending his lead to 29 points. 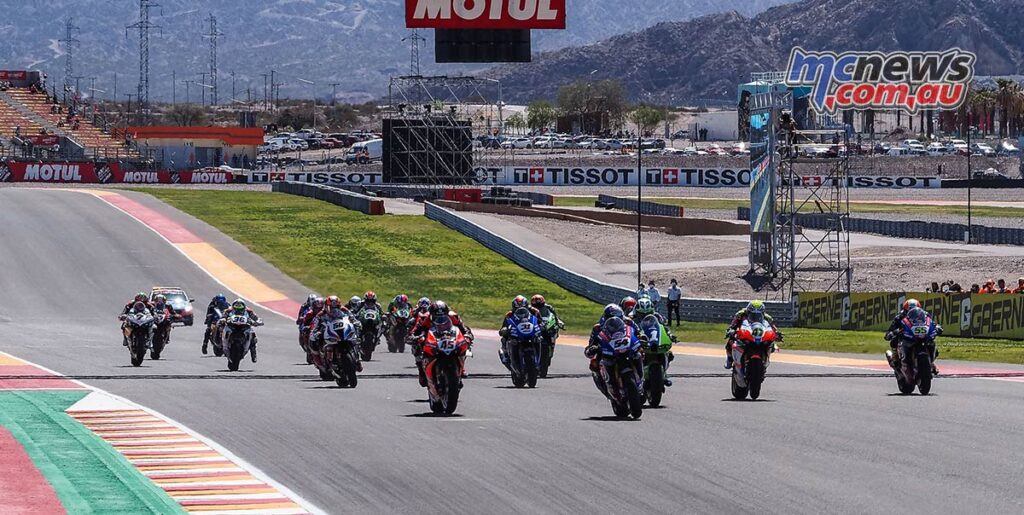 Qualifying second, Razgatlioglu started on the front row, with Rea in the second row in grid positive five. Both got good starts for race one and were the leading two riders after turn one while polesitter Scott Redding (Aruba.it Racing – Ducati) crashed early on.

The Turkish star came into the Argentinean round with a 24-point advantage over Rea and extended that by five points with victory in race one, leading every lap and eventually finishing around five seconds clear of Rea after the 21-lap battle, celebrating his 25th birthday with his 50th WorldSBK podium, and the 12th win of his campaign.

“This weekend we are very strong. This race was not easy for me because I’m pushing every lap for a consistent lap time. I tried to make no mistakes. We are here and I’m very happy. Also, thanks to my team who did an incredible job this weekend. Every session, they are improving my bike. It’s also a very special day for me because it’s my birthday!”

Rea was able to put pressure on Razgatlioglu in the opening stages of the race but soon saw his championship rival pull away from him, with the gap up to more than three seconds by the end of lap nine before Razgatlioglu found another couple of seconds across the second half of the race to win by 5.295 seconds. Rea’s second place came off the back of a difficult Friday where he lost most of free practice 2 after a crash, and fifth place in Superpole to start from the second row.

“I was pretty happy with that and no regrets, I did my maximum. I just struggled in some areas of the track, especially sector three I was losing a lot of time there. That punch from nine, across to ten, 11 and then the flip-flop, I was losing too much time. I felt good in the rest of the track. We’ve been changing the bike quite a lot. I really messed up not having that time in FP2 to understand the bike, the package and the tyres but the pretty good news for us is that we made the SCX tyre work for the whole race. It was quite consistent, my rhythm was strong, it caused me no problems in the front and that bodes well for tomorrow. We’ll try to make a few extra steps and we can try to get a little bit closer.”

Michael Ruben Rinaldi (Aruba.it Racing – Ducati) claimed the tenth podium of his WorldSBK career with third place after passing Axel Bassani (Motocorsa Racing) at around half-distance of the race.

Bassani had started from the front row for the first time in his WorldSBK career but fell back at the start before fighting back into third, before Rinaldi was able to pass him. Rinaldi’s podium was Ducati’s 980th podium in WorldSBK.

The battle for fourth raged on between Bassani and Alex Lowes (Kawasaki Racing Team WorldSBK), with Lowes, using a Top Gun-inspired livery to mark Kawasaki’s 125th anniversary, making the move through turns six and seven to move into fourth before fending off the Ducati rider down the back straight into turn eight, with Lowes finishing in fourth place and Bassani in fifth.

Andrea Locatelli (Pata Yamaha with Brixx WorldSBK) was another who had a strong start as the lights went out but soon found himself falling back down the order as he battled with Michael van der Mark (BMW Motorrad WorldSBK Team) and Garrett Gerloff (GRT Yamaha WorldSBK); with the Dutchman claiming sixth place and Gerloff seventh. Locatelli ended the race in eighth place after starting from sixth place.

Redding ended the 21-lap race in ninth place after battling his way back from the back of the field after his turn one spill, passing numerous riders to secure a top-ten finish despite the early setback, with Leon Haslam (Team HRC) rounding out the top ten after withstanding late challenges from his rivals but unable to keep Redding behind. Bautista went down early on.

The first race of the FIM Supersport World Championship’s first visit to the Circuito San Juan Villicum since 2019 was won in a dominant display by French rider Jules Cluzel (GMT94 Yamaha) as he kept up his record of winning every race at San Juan Villicum with a five-second margin as racing got underway for the Motul Argentinean Round.

As the lights went out for the 19-lap race, Cluzel briefly lost the lead of the race into Turn 1 to the fast-starting Can Öncü (Kawasaki Puccetti Racing) as he out-braked Cluzel into the opening corner but found himself behind the Frenchman after Turn 2 as Cluzel struck back. The pair were able to build a gap to the chasing pack, which was headed by Steven Odendaal (Evan Bros. WorldSSP Yamaha Team) in the opening couple of laps.

Manuel Gonzalez (Yamaha ParkinGo Team) soon found himself ahead of Odendaal before Championship leader Dominique Aegerter (Ten Kate Racing Yamaha) made a move on his title rival for fourth place into Turn 1 at the start of Lap 4. From there, Odendaal found himself going backwards after running wide on a couple of occasions.

Cluzel was able to resist the early challenge from Öncü to maintain his lead throughout the 19-lap race as he claimed his second victory in three races and his third at the San Juan Villicum venue, maintain his perfect record in Argentina. Gonzalez and Öncü spent a few laps battling with each other for second place, with Gonzalez making the crucial move on Lap 13 at Turn 1. Cluzel’s victory meant he claimed his 60th podium in WorldSSP while it was also Yamaha’s 115th win. Öncü claimed his second podium of his WorldSSP career and became only the second non-Yamaha rider to finish on the podium at San Juan Villicum after Lucas Mahias in 2019.

Odendaal battled his back way through the field to finish in fourth place after passing Aegerter on Lap 14 at Turn 8, but the South African was unable to pull away and Aegerter kept the pressure on, setting his personal best lap time on the penultimate lap. As the final lap started, Aegerter made a move at Turn 1 but ran wide, allowing Odendaal to keep fourth place with Aegerter in fifth.