Pedro Acosta has clinched the 2020 Red Bull MotoGP Rookies Cup in Valencia, a round early, with even a crash in Race 1 and no points earnt, not enough to slow his championship efforts.

David Salvador took the Race 1 win from Mario Aji and Australian Billy van Eerde after Alonso, Acosta and Holgado all went down in the lead.

Race 2 saw Daniel Holgado take the win from Acosta and David Munoz, Holgado’s first victory, but second was enough for Acosta to claim the title with a 59-point lead, with only 50-points left to earn at the final round. Unfortunately van Eerde crashed out of Race 2 early on, although he now sits 10th in the overall standings.

Acosta holds the title with 196-points, while David Alonso is second on 137, with Ivan Ortola third on 124. Holgado and Salvador are fourth and fifth, with plenty of opportunity in the remaining two races for riders to prove themselves, and grab a podium position.

Pedro Acosta put himself in pole position for the home stretch in the Red Bull MotoGP Rookies Cup. The 16-year-old Spaniard has a handsome points lead but is not slacking off in Valencia. Just 0.067 seconds slower, Daniel Holgado is determined to put him under pressure as is David Salvador who makes it an all Spanish front row of KTM RC 250 Rs.

Breaking the home country dominance is Mario Aji, the 16-year-old Indonesian, who heads Row 2 after the track dried from the wet free sessions leaving just a few damp patches for Qualifying.  Billy van Eerde meanwhile qualified 14th, after coming to terms with changing conditions, 1.174-seconds off the fastest pace.

“Friday started off wet and cold so FP1 and FP2 were completely wet. Took it easy as it was my first ride back from braking my hand. Qualifying it ended up being dry with a few wet patches here and there. Since it was the first ‘dry’ session of the weekend I was a bit lost at the beginning and took a while to find braking markers and what gears to use and with a short session I ended up 14th on the grid.”

David Salvador took victory by 15-seconds over Mario Aji and Billy van Eerde in the opening race of the weekend, but only after three of the leading quartet crashed out when David Alonso moved onto a damp patch to avoid Salvador’s rear wheel, highsided and both Pedro Acosta and Daniel Holgado went down with him.

The drying track held a good number of damp patches through the 15 laps and they were not the only fallers in the difficult conditions. None of the top three in the championship chase finished and Salvador’s victory propelled the 16-year-old Spaniard into fourth place in the title chase, with three races to go, including Sunday’s Race 2.

It was a welcome result for Australian Billy van Eerde to step back onto the podium, taking it easy early in the race to be ready for a late push, which proved to be a smart strategy with damp patches catching many riders out.

“Race 1 was similar conditions to qualifying with a few more wet patches around here and there and the sun in our eyes which made it difficult to see them. Took it easy at the start then mid race got to the front of the group I was in and started to push and had some decent times for the conditions. A few crashes happened ahead of me and I ended up finishing on the podium in third which was a nice surprise. It has been such a difficult year with injuries and it’s great to be back. By the end of the race my lap times were not so different to the guys at the front and it has given me a lot of confidence so I am really looking forward to the last three races starting with tomorrow.”

An intense three-way battle for the win was settled only at the final corner of Race 2, in favour of Daniel Holgado over Pedro Acosta and David Muñoz. It gave 15-year-old Spaniard Holgado his first Cup victory, while the 2020 Red Bull MotoGP Rookies Cup title went to 16-year-old Acosta, despite two races being yet to run.

“It was a really good race because after the crash yesterday I was thinking about the championship. I got a good start but David and Dani came with me and we could get away. They were both riding really well, very fast today. I was happy that it was just the three of us and then I forgot about the Cup and tried to win the race. Today, Dani was so so fast and I couldn’t win but I am happy with the championship. We didn’t have any dry practice so the bike setting wasn’t good, we can improve it for sure for next weekend but I’m not complaining, I’m happy with the race. It means so much to me to win the Rookies Cup because when I joined the Cup last year I had no other bike to ride and this has given me the chance to show what I can do.”

It was an all Spanish podium with 14-year-old Muñoz just nine-thousandths of a second behind at the line. The Cup points aren’t that close as Acosta ended the first Valencia weekend 59 points clear of David Alonso with only 50 on offer in the finale next weekend. Alonso, the 14-year-old Colombian did put in another fine ride, taking fourth after a great fight back from his 13th place grid position.

“I am so happy with my first victory in the Red Bull Rookies Cup. I had a really good feeling with the bike and I knew that I could race with Pedro all the way. I planned the last lap because I knew I had a good chance at the last corner and it worked out perfectly. The bike setting wasn’t perfect because we didn’t have dry practice and the rear was sliding quite a lot but I had a good feeling for it so it was OK, I could control it.”

Billy van Eerde came together with another rider in the first lap, with four riders crashing, in a disappointing end to the Australian’s weekend, after a strong showing in Race 1.

“Race 2 was completely dry and I was really looking forward to it. On the first lap in Turn 2 another rider and I touched and four of us ended up going down which was disappointing! Anyway I’m all good and looking forward to next weekend.” 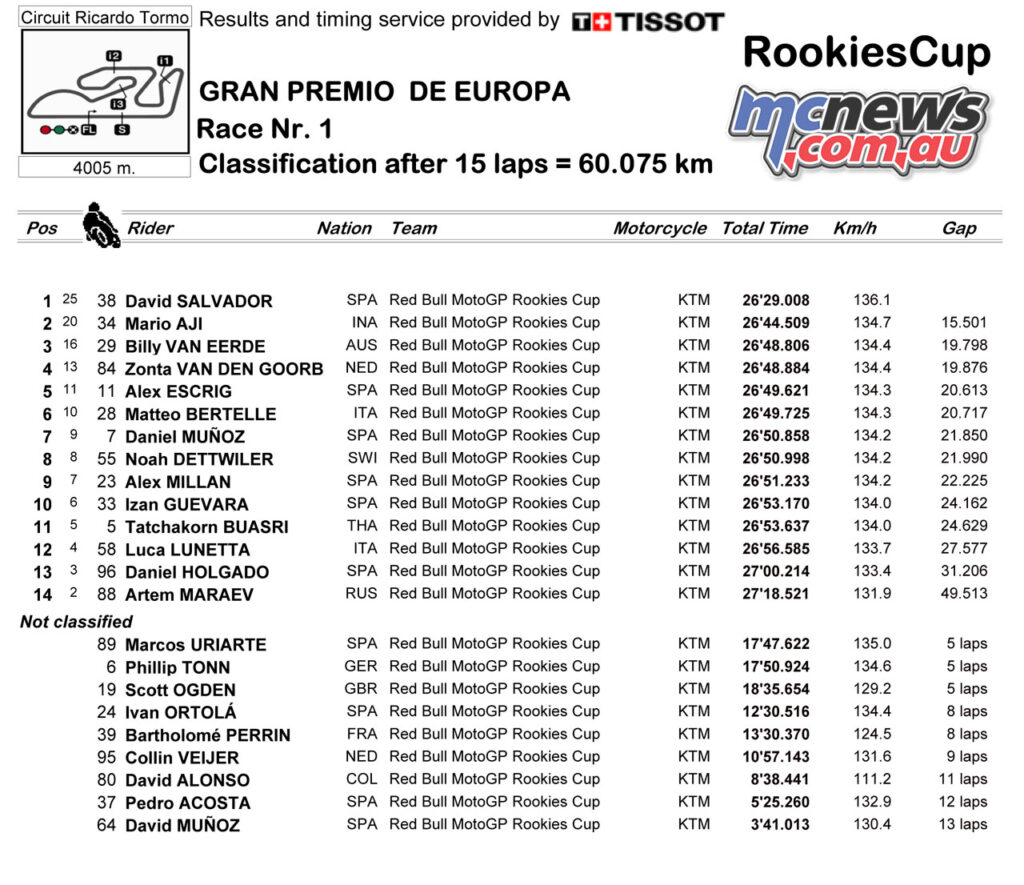 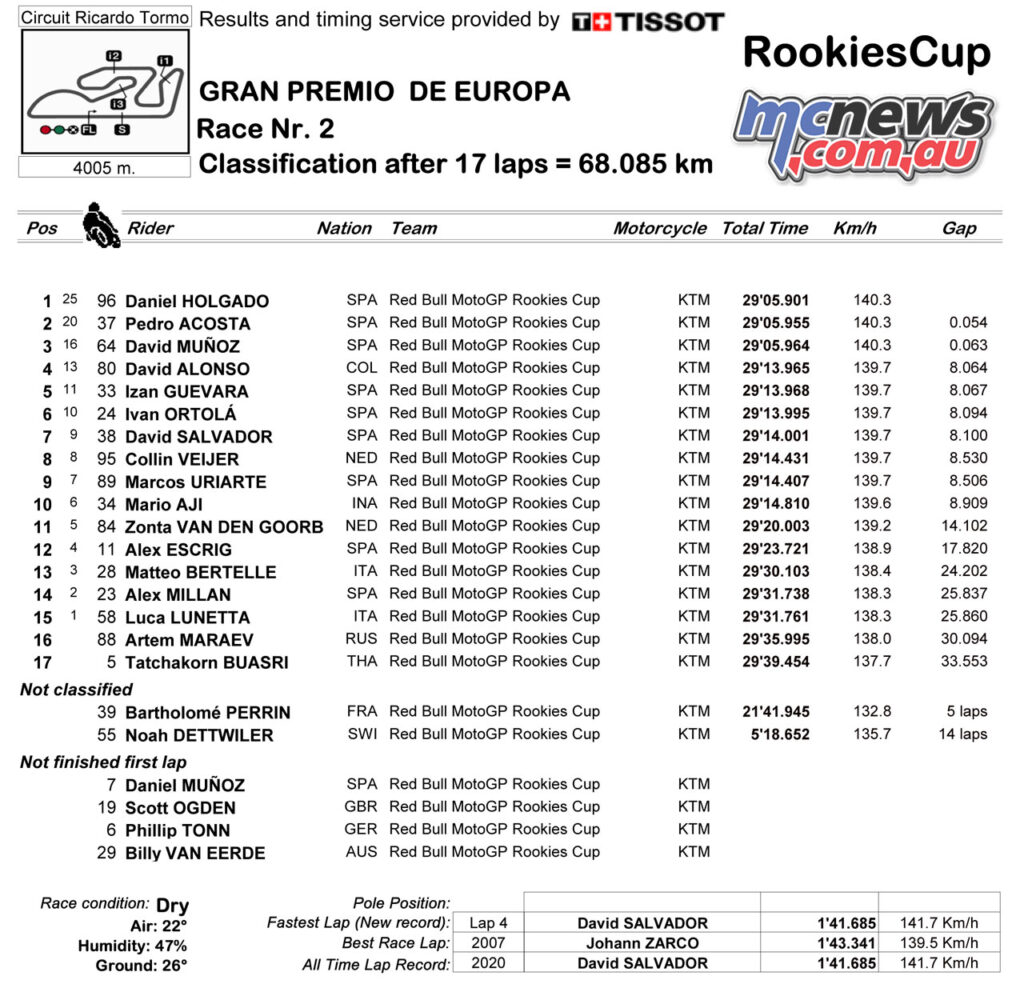 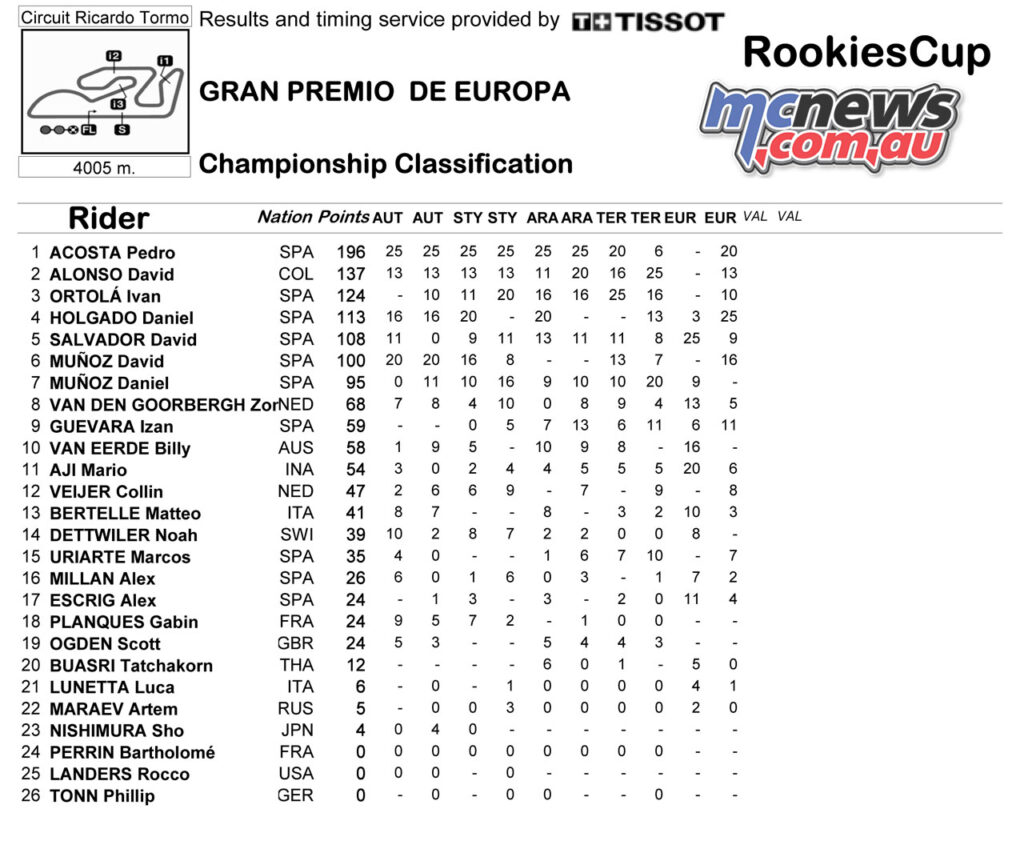 Beaton wraps up 2020 in fourth at MXGP of Garda Trentino