The Red Bull MotoGP Rookies Cup returned to racing over the weekend at Aragon, with Australian Billy Van Eerde back on track after breaking his femur and making a strong return. A crash in free practice wasn’t the best start to the weekend, however when racing commenced Van Eerde was starting from P9. Despite some early set backs in the opening race, he fought his way back from 17th to a sixth place finish, and followed up with seventh in Race 2.

Van Eerde now sits ninth in the standings, with Pedro Acosta continuing to lead the championship.

“The weekend started off with a crash after only four laps in FP1 which wasn’t ideal, luckily I was ok. FP2 and Qualifying went quite well getting my feeling back on the bike in FP2 and then putting together a decent lap in qualifying to manage P9. Race 1 I made a few big mistakes and dropped to 17th but fought back to finish P6 after a nice battle with some of the other guys. Race 2 I got an OK start but after a few laps I lost some confidence in the front after a few moments but managed it throughout the race to finish in P7 after another race-long battle. My leg was good after a few painkillers, I just have to put more effort in than normal changing down the gears and for changes of direction. Everyday it’s improving so I’m looking forward to pushing more next weekend to try and get in the front group.”

Billy now has five race meetings over the next five weekends between Red Bull Rookies and the CEV series.

Pedro Acosta could hardly improve on the four straight wins that started the Red Bull MotoGP Rookies Cup in Austria but he managed to do exactly that over 15 thrilling laps of Aragón in Race 1. The 16-year-old Spaniard could not break free at Spielberg but he achieved that superbly in his first race at home at Aragon.

It was the same hungry challengers fighting it out and chasing him all the way again with Daniel Holgado leading Iván Ortolá across the line for an all Spanish podium.

It looked from the start like a repeat of the Austrian races with a pack swapping places at every turn. Acosta tried to break away early but couldn’t, Holgado particularly hung on grimly to the #37 KTM RC 250 R.

“I started from pole but you know, really this means nothing. What was important is that at about lap 8 when the tyre performance went down I could still keep the lap time. That was what gave me the break so I could open up a gap. I kept it smooth and kept the lap time. It will be difficult to manage that again tomorrow but I will try. The track condition was not the same as yesterday, the temperature was down I think and the grip not as good but my bike is working well in all conditions and I also prepared myself for this.”

David Salvador just fell short this time and missed out on a podium place over the last 2 laps after battling all the way. David Alonso, the 14-year-old Colombian had a brilliant ride with two ‘penalties’ on his way to 5th.

18-year-old Australian Billy Van Eerde made a great comeback from injury and breaking his femur, claiming sixth despite some conservative riding.

Pedro Acosta cranked it up a notch for Race 2. The 16-year-old Spaniard charged away on Lap 1 leaving the chasing pack to wonder what happened, creating a 5-second gap by the time the finish flags were waved.

The excitement was still there though for the minor podium positions, which saw a fantastic seven rider contest for second with riders frequently rubbing fairings.

Acosta celebrated a clear victory as the other places were sorted out at the last corner.

“I think there was no difference really in the bike today, the temperature was a little different but not much. The difference was that last night I was talking with my helper Paco (Francisco Marmol Oliva) and he told me that I had to make a good start and break the group in the first lap. I did it and I want to thank the group around me, it is only they that understand how hard we work to achieve these things. Going fast on the first lap is not easy but talking with the Rookies Cup team and those close to me we discussed that I must finish the warm up lap with speed and be mentally ready and focused to be fast at the start. It worked.”

Daniel Holgado and David Muñoz touched and crashed coming onto the finish while David Alonso took second. Izan Guevara crossed the line third but lost his podium place to Iván Ortolá for exceeding track limits on the last lap.

David Salvador picked up fifth ahead of Daniel Muñoz who had served a long lap penalty with five laps to go.

Australian Billy Van Eerde was a position back from his Race 1 result, in seventh, racing Zonta van den Goord to the finish line and coming out victorious by just 0.011-seconds. 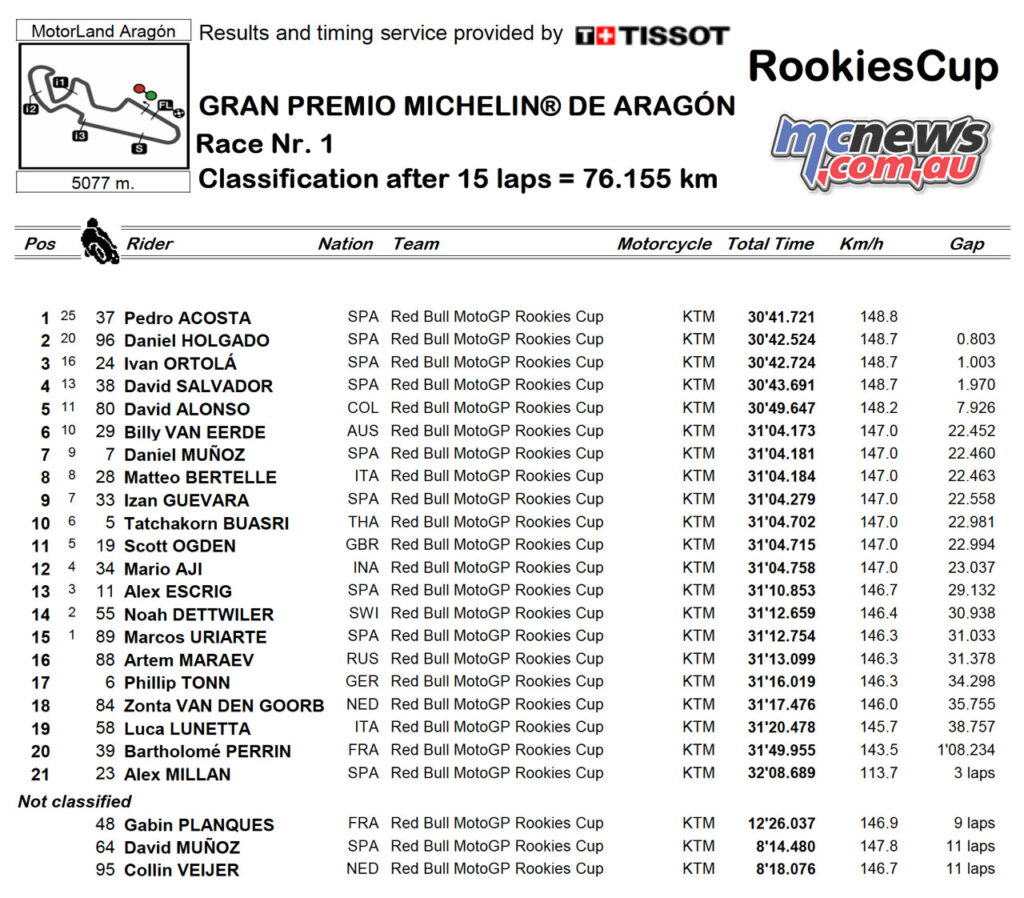 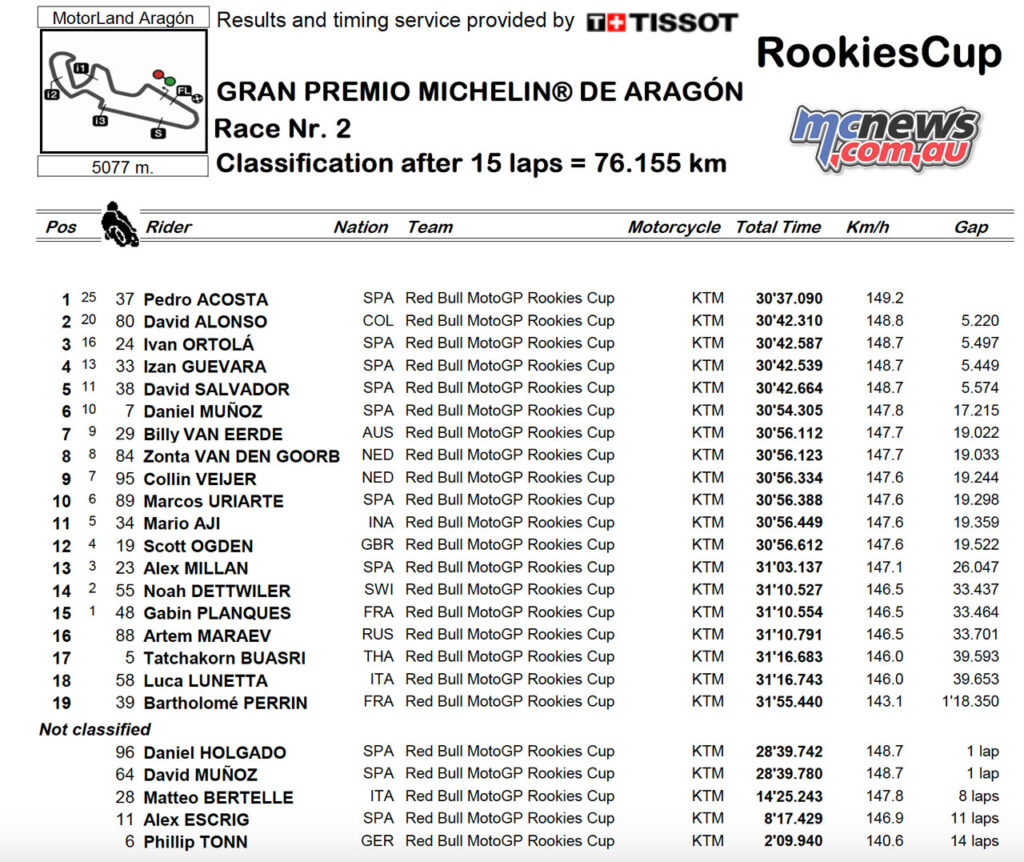 So which MotoGP riders crash the most?

Kawasaki wrap up two days of WorldSBK testing at Aragon

So which MotoGP riders crash the most?

Kawasaki wrap up two days of WorldSBK testing at Aragon