The 2020 Red Bull MotoGP Rookies Cup has wrapped up with a second round at Valencia, and while Pedro Acosta had already been crowned 2020 champion, the battle was on for the silver and bronze medals.

An exceptional performance from David Muñoz with two wins from two races was enough to leave him tied on points with Iván Ortolá, but the two wins clenched the runner-up position for Muñoz.

Australian Billy van Eerde had to bow out for the final round after injuring his ankle in FP2 and finished the season 13th overall in the standings, with numerous injuries during the season adding an additional challenge. The previous round at Valencia saw van Eerde’s best result of the season with third in Race 1, however a crash in Race 2 was a disappointing end to the weekend.

Prior to that P8 at Aragon in Race 1 for Round 4 was a promising start, before a late crash in Race 2 saw Billy fracture two metacarpals in his left hand, discovered after swelling and pain meant a trip to the hospital for a checkup.

This was after Billy returned to racing after braking his femur in August, requiring surgery to have it pinned, with 2020 proving a rocky year overall. He now returns to Australia to recover.

“The 2020 Red Bull MotoGP Rookies Cup has come to an end for me. Firstly I would like to let everyone know that I won’t be competing in the last races of the season. During FP2 I hurt my ankle and do not feel 100 per cent fit. The decision wasn’t taken lightly but I feel it was the right decision. I will now focus on regaining my fitness and strength at home in Australia for next year.  The past three years has been an amazing ride and I thank everyone involved in this awesome project. The organizers, Peter Clifford, Marlene and my mechanic Juan, who have been there with me from the beginning A huge thank you! I have enjoyed my time with you all and will take with me great memories and will remember all the fun times had by all. Congratulations to Pedro Acosta for taking out the championship. Very well deserved.

“Special mention to Pole Position Travel for all their support over the past two years. Laura, Claudia, Neil and many more who have supported and helped me adapt to living over in Europe. Will catch up soon. In a couple of days Dad and I will be boarding the big bird and heading back to Australia to family and friends. We are looking forward to catching up with everyone. Huge thanks to Jack Miller for everything, your guidance and support is greatly appreciated and thanks again to Shane Stratton TM Racing Andorra for always there helping out as well. Thanks once again to everyone for the support and encouragement over the past three years. Would not have been able to experience this journey without you all. I will now put 2020 behind me now and focus on the future. Its been crazy times during the Covid pandemic and I hope you all stay safe in Europe and have a Great Christmas.”

David Muñoz took his first victory in the Red Bull MotoGP Rookies Cup on the line after a titanic 10 man battle, with Iván Ortolá was just 0.040 seconds behind and David Salvador third for an all Spanish podium.

“I really enjoyed the battle with my mates. It was difficult, the track was slippery but the same for everyone and I kept pushing all the way. I had a great run through the last corner to take the win just before the finish line. The bike was really good and though it will be difficult again tomorrow but the race is a little earlier and the weather forecast is warmer so I hope the track gives more grip.”

There was drama from start to finish with pole man Daniel Holgado crashing out of the lead early, David Muñoz missed him but Cup champion Pedro Acosta went down. Those three had looked capable of breaking away but after that no one managed a clear advantage and any of the top 10 might have won on the final lap.

16-year-old Ortolá just couldn’t hold on for the win sharing, “I am very happy with that, I didn’t make a good start but lap by lap I caught up and in the last few laps I was able to fight for the win. I got in front and closed the door, defended as much as I could but I didn’t make a perfect job of the last corner and David overtook me on the run to the flag. I’m happy that I have moved up to 2nd in the championship and I hope to do well tomorrow. The bike was really great, so much better than last weekend when we did not get any dry practice to sort it out. This weekend we made a great setting.”

Salvador came back perfectly after a lap penalty under a red flag, recomposed himself and was back on point. “I am very happy for this race because after yesterday, getting the long lap penalty I was very upset,” explained the 16-year-old. “I just didn’t see the Red Flag. So I took the long lap at the start of the race, I had worked out in my mind exactly how I would do it and it went perfectly so I could catch up again and get into the lead quite quickly. The pace was very good and I enjoyed it a lot. It was a great battle with David and Ortolá, so many overtakes and an incredible battle with these riders.”

Marcos Uriarte was just off the podium, but positive about a fourth place finish. “This weekend I felt very good on the motorcycle,” stated the 15-year-old Spaniard.” Yesterday I crashed in Qualifying, the first lap after we had stopped for the Red Flag so that is why I was only 14th on the grid. Today I pushed so hard but I just missed the podium. The bike was incredible today, I really enjoyed it so tomorrow I hope I can do even better.”

Another rider proving fast once again was Mario Aji, who was disappointed with the result but happy with the many battles, “I’m not happy with the result but I really had fun in the race, a lot of battles,” enthused the 16-year-old Indonesian. “Maybe in 1 lap, 5 changes of position. It was crazy and I enjoyed it a lot. I made a mistake on the 2nd to last lap and a lot of people overtook so I was back a bit. By then my bike was sliding around a lot, I know the other riders said the same but I had a difficult feeling with the rear tyre in the last laps. This is racing, it is what it is and tomorrow I try to be on the podium. Maybe we will make the bike a little harder on the rear, we will talk about it.”

Pedro Acosta picked up the fallen bike to finish 14th after another crash early in the race, with a crash also in qualifying causing some pain in his wrist, “Yesterday in the Qualifying I had a crash and I hurt my wrist a bit so I preferred to take it easy and go a bit slower in the early laps,” stated the 16-year-old Spaniard who clinched the Cup last weekend. “But then Holgado crashed, Muñoz (David) braked a little and I touched Muñoz and fell. Nothing to say, this is racing and sure Dani did not want to crash. Tomorrow we will see for the last race.”

Two wins thanks to the two perfect last corner exits by David Muñoz gave the 14-year-old Spaniard a magic last weekend of Red Bull MotoGP Rookies Cup action for 2020. He repassed fellow countryman Daniel Holgado on the charge to the line with Cup winner Pedro Acosta right in their slipstream, after a Race 1 crash saw him finish the opening bout in 14th.

On Saturday, Muñoz had got the better of Iván Ortolá in exactly the same way and with Ortolá crossing the line 10th today Muñoz matched his score in the Cup points table. This handed the second place Cup medal to Muñoz as he had two wins to Ortolá’s single victory.

Again it was an incredible 11 rider, race long battle for the lead that went on for the entire 17 laps and the top 9 finishers were covered by 1.5 seconds.

“The last corner was incredible, David came inside and passed but I had the better line coming out just like yesterday. The bike was great today, I felt very confident, we had more grip than yesterday because the track was a bit warmer. I am so happy to take this double victory and second place in the Cup.”

Daniel Holgado was happy to settle for second in the season’s final race sharing, “I’m happy with this last race,” stated the 15-year-old Spaniard. “I had a good feeling for the bike. Late in the race the rear wheel was sliding quite a lot and I had to be a bit careful with that. I tried everything and went for the lead at the last corner. Braked so late inside David to pass him but he just had the drive coming out and there was nothing I could do. I’m happy that I could finish the championship in this way, on the podium and fighting for the win all the way.”

2020 Champion Pedro Acosta had a challenging weekend, but ended on a high note, on the podium, if not on the top step. “In the end, after Friday’s crash in Qualifying it was a hard weekend,” explained the 16-year-old Spaniard. “The race was so so difficult with the pain in my wrist. In the first 10 laps everything went with the flow, went well. But from lap 10 or 11 it was so so painful. This is racing though and I think that being on the podium like this is the best way to finish the year.”

Iván Ortolá finished 10th, leaving him tied on points with 2020 runner-up Munoz, but that equated to the third step on the championship podium after everything was tallied up, despite both riders finishing on 150-points. “I was a bit unlucky in the first laps, in the group and thinking about the situation in the championship,” explained the 16-year-old Spaniard Ortolá, who finally crossed the line 10th after a last lap tangle with David Alonso who fell. “Towards the end I had a bit of trouble braking. The front was moving around a lot but if I braked earlier many riders would pass me so I had to keep pushing and then I was in trouble running wide. Finally I am happy with third position in the championship… but second would be better…. Next year!” 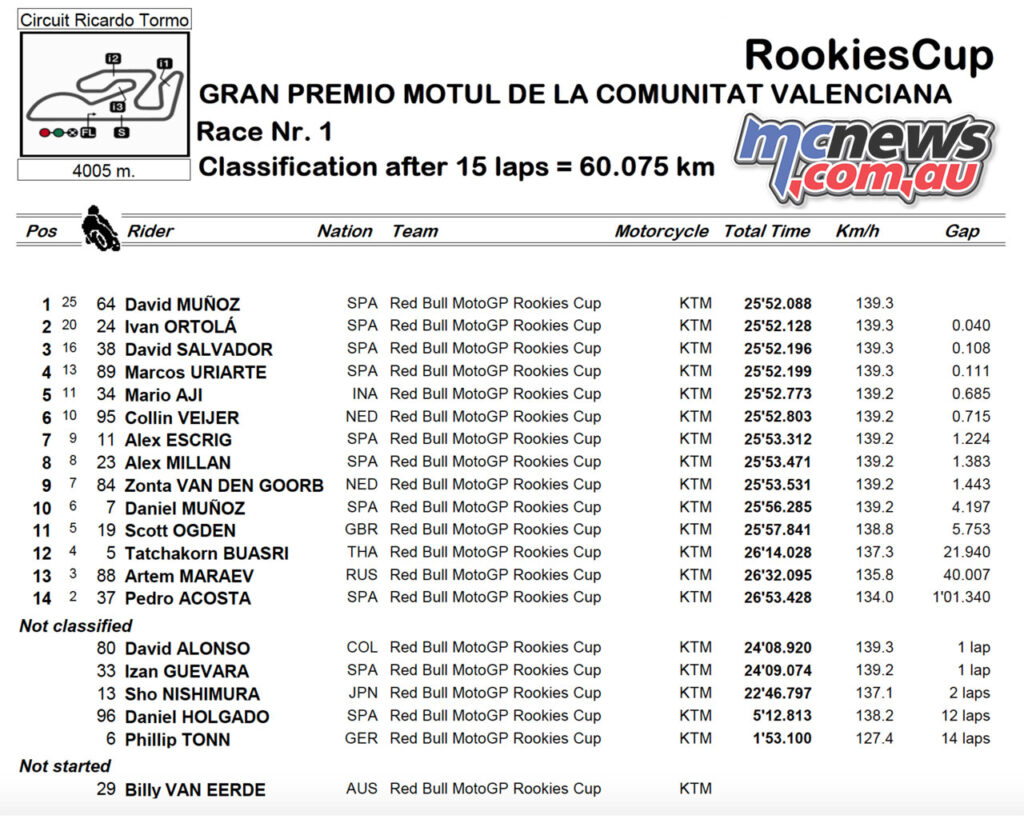 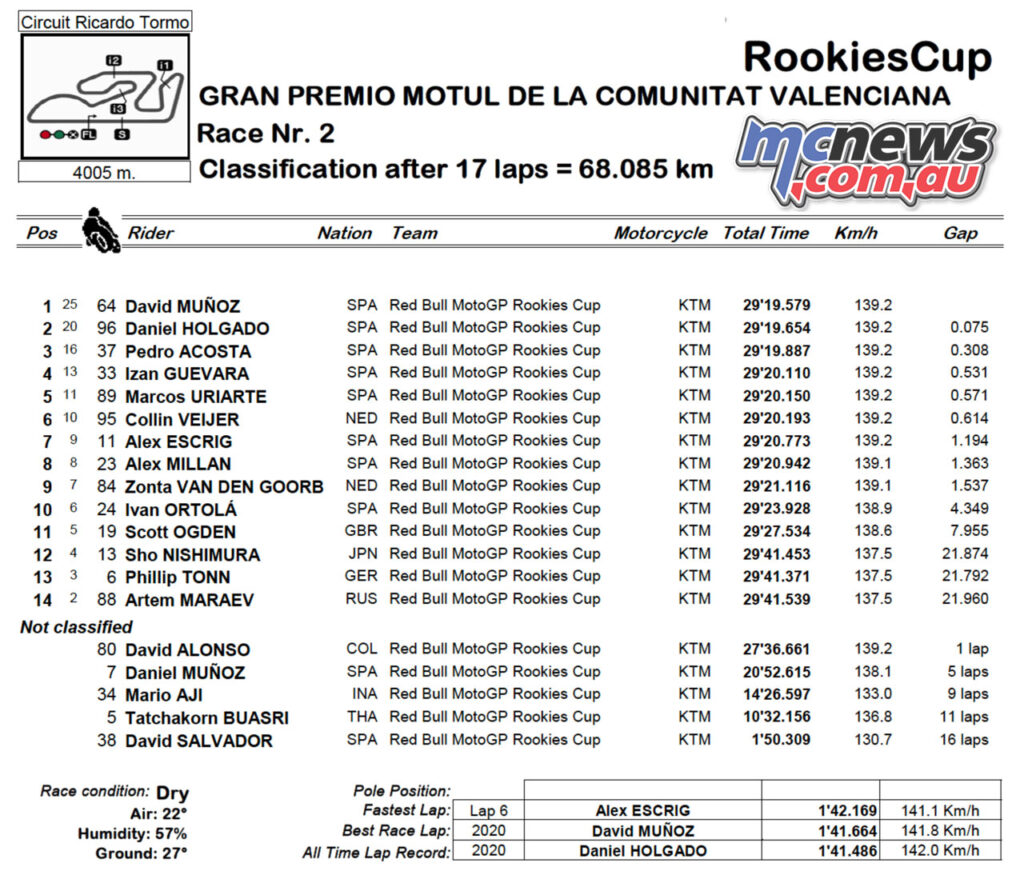 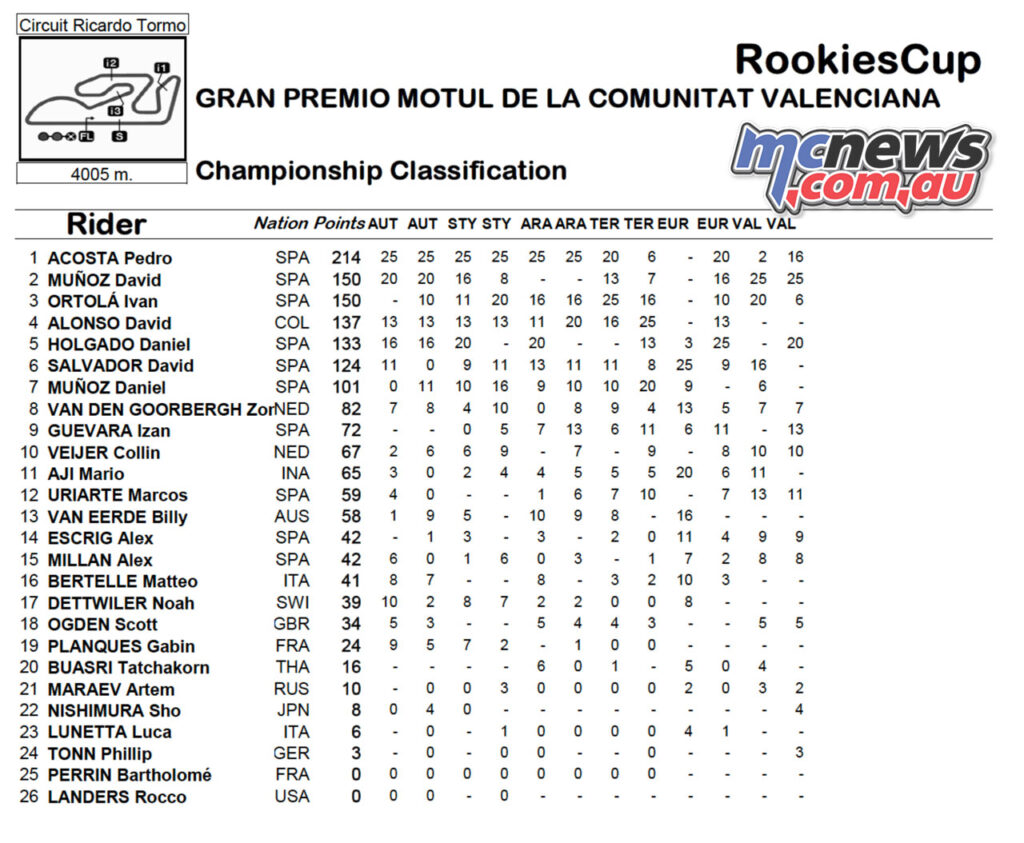 Brookes hoping to get championship defence back on track at Brands

Romaniacs is go for next weekend